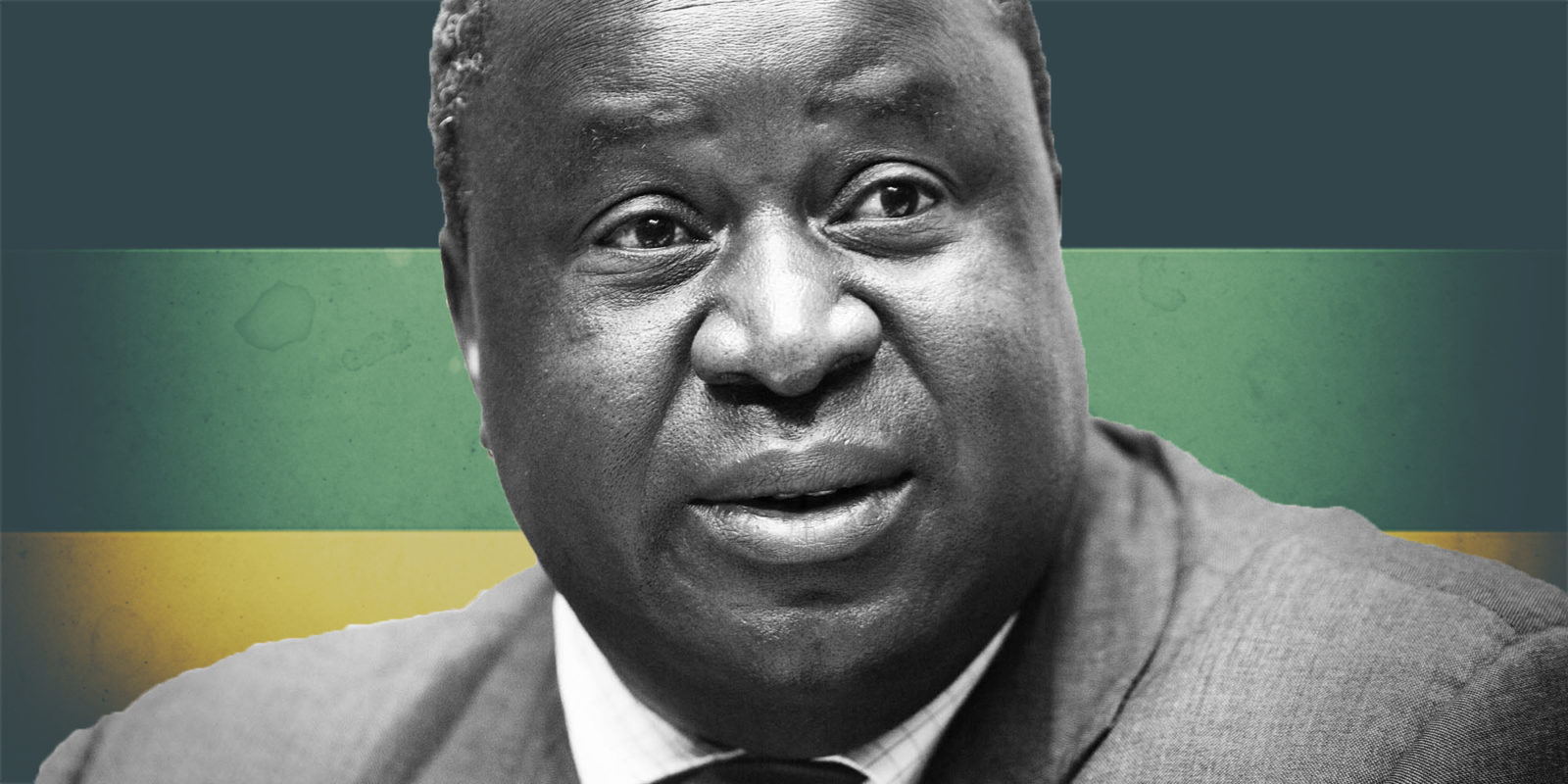 Finance Minister Tito Mboweni will have few legitimate answers to the pressing questions he is likely to face in Davos. (Photo: Leila Dougan)

With nothing to offer, Tito Mboweni may be tempted to talk up the Fourth Industrial Revolution, but, unfortunately for him, it won’t escape investors that the South African government is still not able to deliver such basic services as electricity, sewage and water reticulation and road infrastructure. Services successfully delivered by other countries during the First and Second Industrial Revolutions.

Tito Mboweni, our most rational and clear-thinking member of the executive, who is this week leading South Africa’s delegation to the annual talk shop that is the World Economic Forum in the Swiss resort town of Davos, has got quite a problem in his hands. And his credibility internationally may come out the worse for it — along with what’s left, if any, of South Africa’s credibility in investment circles.

There are many questions for Mboweni to answer in Davos: What happened to all those structural economic reforms that President Cyril Ramaphosa promised when he assumed the presidency in February 2018? Why should anyone in their right mind even consider putting their clients’ money in South Africa? What does South Africa have to offer? Will the country ever really be ready to host investments and provide competent returns on the investments?

Those questions would arise only if anyone of any significance ever ventures to pass by the South African government stand and spend more than a few minutes to engage. Time has always cost money, and even more when you have paid the hundreds of thousands of rand it takes to get into the WEF.

In that case, Mboweni will not have any credible story to tell.

I must also hasten to declare that in my almost 15 years of financial journalism, the annual jaunt to Davos remains above my pay grade.

As I understand it, the annual gathering of influential leaders in the Swiss resort town is an opportunity for countries, companies and investors to meet and exchange ideas, sell their investment propositions and ultimately to clinch investment deals. Call it an opportunity for multiple courtships on the business front.

Those who wish to be considered for investment opportunities host talks and other events in which they showcase their countries or companies, talking up the possibilities and potential returns to would-be investors.

Annually, South Africa has been sending a delegation to talk up the country and its various entities in Davos since the early 1990s, when Nelson Mandela and his government-in-waiting, the ANC, were the toast of the world.

Mandela’s first Davos in 1992 also happened to be Mboweni’s first. Back then South Africa was one of the few global shining stars. Black liberation political parties had just been released, political prisoners freed, transition talks were on the go. And the ANC was the dominant political force driving the transition to democracy. The sun shone ever bright on the southern tip of the African continent.

Everybody wanted to know what the party planned to do once it took power. And everybody hoped South Africa would be the exception to the African fate of failed states post colonialism.

So Mandela was invited to Davos to tell the world’s investors what democratic South Africa, and his government, would look like. Mandela did not disappoint, for he had a real and true story to tell, unlike Mboweni today.

Among other things, Mandela had this to say:

“We visualise a mixed economy, in which the private sector would play a central and critical role to ensure the creation of wealth and jobs. Side by side with this, there will be a public sector perhaps no different from such countries as Germany, France and Italy where public enterprises constitute 9%, 11% and 15% of the economy respectively, and in which the state plays an important role in such areas as education, health and welfare.”

Then he invited the world’s investors: “We, therefore, urge you to enter into a partnership with the people of South Africa, who would like to act together with you to rebuild their country to the mutual benefit. We invite you to begin now to investigate the business possibilities in our country so that you are able to move with all due speed when the moment is opportune,” said Mandela, pointing to the imminent lifting of sanctions against apartheid.

“Furthermore, we are determined to move forward as speedily as possible to establish the political and social climate which is necessary to ensure business confidence and create the possibility for all investors to make long-term commitments to help develop the South African economy.” How wrong was our Madiba!

Ironically, Mboweni told journalists at a pre-WEF farewell breakfast last week that he had co-written Mandela’s speech with former ANC MP and businessman Saki Macozoma. How must he wish he could legitimately say these things Mandela was able to truthfully say!

Without impugning on Mboweni’s personal integrity, he cannot with any legitimacy make any of the promises Mandela could make before assuming the presidency in democratic South Africa.

That’s because Mboweni’s story is impossible.

Two years ago his government promised it would reform the structure of the economy to break the barriers to growth and investment growth in order to make it possible for the economy to grow faster. To do that, South Africa said it would break Eskom into three separate entities and bring in an independent system operator to buy electricity from parties other than the state-owned electricity generator.

The government also said it would break South African Airways into three separate companies that would be able to fly passengers anywhere they wanted, separately maintain aeroplanes and separately serve the passengers food.

These break-ups would be carried out so that the problem areas of the businesses could be isolated and dealt with separately without disturbing that which works.

SAA and Eskom, as well as the South African Broadcasting Corporation, airliner South African Express, fuel producer PetroSA, arms manufacturer Denel, have been dragging down the economy as they have been sucking up much-needed funds in order to remain going concerns for the past decade. Not that they were any better before. They are only still around courtesy of the taxpayer.

Two years ago already, Mboweni said he, as finance minister, would make sure only those state-owned companies that could wash their own faces would remain operating. Those who could not stand on their own two feet would be allowed to collapse. Mboweni mentioned SAA by name as being among those.

His party has since twice forced him to dish out taxpayers’ monies to the flying waste of money. Mboweni has also been forced to allocate no less than R273-billion to support Eskom over the next 10 years. The SABC and the South African Post Office have also claimed their share of the contents of the taxpayer wallet.

Of course, none of that has helped much.

Mboweni must still find some valuable assets that provide some income to the government, in the form of dividends and tax, to pay R2-billion to keep SAA airborne. Of course, Mboweni is an unwilling participant in all this. He merely is a prisoner of the ruling party’s useless and outdated ideology of state dominance. (Why the finance minister is even doing a job he’s not allowed to perform is a story for another day).

Mboweni misses no opportunity to tell anyone and everyone that cares to listen that he would have already closed down SAA and PetroSA. Of course, he’s right.

In Davos, he will be forced to spend this week telling people why South Africa has not carried out its promises of January 2018. He will also be called to talk about the future of the South African Reserve Bank, whose independence the government has repeatedly said is not up for discussion. But investors will not be fooled by that. It has not escaped them that Mboweni is himself on the back foot in his own party over the future of the Reserve Bank.

Unfortunately for Mboweni, he will not have any legitimate answers.

Neither will he have any legitimate answers when it comes to his party’s moves to amend the Constitution to allow for the expropriation of land and property without compensation.

Instead of speaking plainly, Mboweni will try to divert attention by talking about such fancy things as the Fourth Industrial Revolution, which he was asked about at the farewell breakfast.

Unfortunately for him, it won’t escape investors in Davos that his government is still not able to deliver on such basic things as sewage and water reticulation and road infrastructure. Neither is it able to reliably deliver electricity. And those are matters that were successfully delivered by other countries during the First and Second Industrial Revolutions. BM