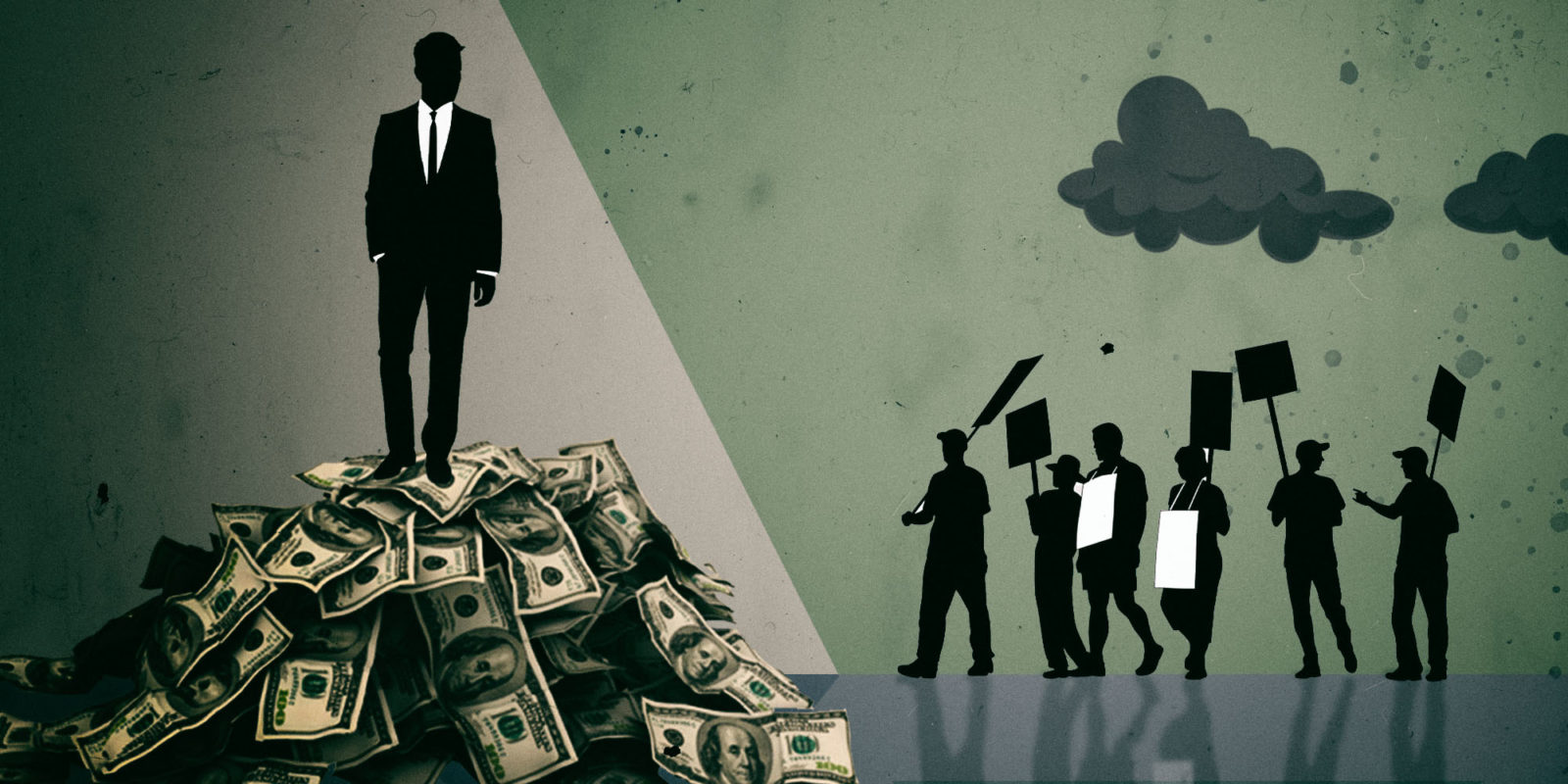 Governments should naturally be at the forefront of implementing the right type of policies, but, with corruption and elite capture prevalent around the world, they can often be vehicles for institutionalising inequalities rather than mitigating them, says the writter. (Illustrative image: Daily Maverick)

The latest Human Development Report presents a dire picture of the escalation of inequality within and between nations. It shows how inequality attaches to race, gender, ethnic and social origin, disability and sexual orientation. But will anyone other than civil society take it seriously?

We’re caught in a trap,
I can’t walk out
Because I love you too much baby.

Why can’t you see
What you’re doing to me
When you don’t believe a word I say?

We can’t go on together…

When Elvis Presley sang these words in the 1960s, he was obviously referring to love. But, transposed to 2020, his words might just as well refer to our relationship with inequality where we are also “caught in a trap”. The words have been given particular resonance by a devastating Human Development Report published by the UN Development Programme (UNDP) in the dying days of 2019.

Because it was published at the end of the year many people missed it. But it deserves everyone’s careful consideration.

The Human Development Report is published annually. But in 2019 the UN decided that human development should be reconceptualised around the issue of inequality. It titles the report Beyond Income, Beyond Averages, Beyond Today: Inequalities in human development in the 21st century – giving new analytical depth to capturing the global human condition.

The report draws on a body of impressive international scholarship that in recent years has analysed global inequality – or inequality within and between countries as it is also commonly phrased – in much greater detail than before.

In the past, this scholarship has often – and with good reason – focused on measuring income and wealth inequalities. However, the concept of human development offers a broader framing that helps us understand the multi-dimensional nature of existing inequalities better.

The global reality speaks for itself.

• the difference in life expectancy at birth between low and very high human development countries is 19 years. This reflects both gaps in access to health care and that a quarter of a lifespan is lost through being born in a poor country.

• Global out-of-school numbers are extremely high, with more than half the world’s children unable to read and understand a simple story by the age of 10.

• The current deviation from the 2030 Sustainable Development Goal Four target for reducing the numbers of children out-of-school means that by that year there will be “225 million children starting their life with a hardly reversible disadvantage”.

In South Africa, the worldwide overview reveals, the share of income received by the top 10% reaches its peak at 65% while the bottom 40% in the country receives only 4% of income.

On climate change, a study based on longitudinal data from 37 countries is referenced showing that “warming has made tropical countries at least 5% poorer than they would otherwise be”. Climate change, together with access to technologies and required skills in the knowledge economy, are likely to be sources of 21st-century inequalities (adding to the 20th-century ones).

Inequalities are the result of political choices

This is a lot to digest but there is one key message from the 2019 Human Development Report to keep in mind: nothing is inevitable about these inequalities. They are a result of choices made in the past – including flawed policies and economic thinking gone wrong. We could change direction and secure massive benefits for people around the world. But, for that to happen, we need political will.

We also need to understand how we arrived at the current impasse.

While reading the report, a quote from the Nobel literature prize winner Alexander Solzhenitsyn came to mind. In the late 1960s, he and many authors faced extensive censorship from the Soviet regime, which censored or suppressed independent creative expression aimed at reflecting on the realities of life in the USSR. Solzhenitsyn explained:

“What is best in our literature appears in a mutilated form … Literature which does not breathe the same air as a contemporary society, which cannot communicate its pain and fears, which cannot warn in time against moral and social dangers, does not deserve the name of literature, but merely of cosmetics.”

Substitute Solzhenitsyn’s notion of “literature” with the modern-day field of economics and we have a very contemporary problem. The dominating economic paradigms – backed by the key international and domestic economic institutions like the International Monetary Fund and the World Bank and many central banks that have pushed these paradigms forward – have left us in a “mutilated world” where billions of people on a daily basis pay a heavy price for these failings.

We have lived through nearly four decades of an economic doctrine that has been unable to consistently see and respond to the “pain and fears” of people and the “moral and social dangers” that communities, countries and the larger world have been facing.

Mainstream economic thinking during the last decades of the 20th century became “cosmetics”, in Solzhenitsyn’s understanding of the term, presenting a mask that denied the damage and pain it was inflicting on humanity and the environment. We live with and must face the devastating consequences of that disturbing problem. Putting lipstick on global inequalities is a really bad prescription. Lip service glossing over the problems is no better.

On this historical point, the authors of the 2019 Human Rights Development Report have actually found it necessary to repeat something that UN experts warned against back in the 1950s. At that time, they advised in UN reports on the “World Social Situation” that “inequalities in human development … cannot be accounted for simply by using summary measures of inequality that focus on a single dimension”. The 1950s experts warned against an over-reliance on the GDP figure or the Gini-coefficient.

The 2019 UN experts have felt it necessary to do the same.

The UNDP report calls for “a revolution in metrics” and “a new generation of measurement” to illuminate the underlying mechanisms that generate inequalities. New innovative research, drawing on a broader range of data sources and more refined analytical tools, suggests that, in many countries, income and wealth at the top may be accumulating faster than previously understood using summary measures of inequality. This must be captured in our analysis.

Furthermore, good policies need good measurement to better inform public debate and to identify potential revenue available to the state. Here transparency is a major concern. Huge amounts of wealth are hidden in offshore holdings and thus the report documents that:

“Eighty-eight countries score one or less (on a 20-point scale) for availability of information on income and wealth inequality – meaning they have 5% or less of what would be an ideal level of transparency.”

This is where the new approach of the 2019 Human Development Report brings dividends. Wealth and income inequalities most certainly need to be addressed but that will not be sufficient to reverse existing inequalities. Hence, the report places emphasis on existing health and educational inequalities and warns of the new inequalities related to climate change and access to technologies that are likely to define the 21st century.

This broader perspective will allow many stakeholders to engage in relevant action. A range of solutions is on offer. The report shows that policies that:

“ensure equitable access to quality early childhood education have long-term consequences for health, cognitive development and employment prospects – and they even benefit a person’s siblings and children”.

Fiscal redistribution is also shown to be a powerful tool to address income inequality; government spending on health and education are clearly presented as equalising forces bringing wider benefits.

Significantly, the Human Development Report also makes as a major point that focusing on human dignity is an important strategy and should be one of the “constitutive aspects of development in the 21st century”.

Doing this brings the concept of human development into close contact with the legal framework to protect and fulfil human rights that is articulated in many UN conventions and in national constitutions (editor’s note: a very valuable website has just been launched that reveals how many countries have adopted human rights into their constitutions). This framework actually expands our possibilities for action, suggesting the possibility for a human rights economics that we now must urgently consider going forward.

The report explicitly mentions that “dignity as equal treatment and non-discrimination can be even more important than imbalances in the distribution of income”. This is based on evidence from Chile, a country with very unequal income distribution, showing that in terms of people’s concerns, their discontent ranked higher when it came to unequal access to health, unequal access to education and unequal respect and dignity in the way people are treated than when it came to income inequality.

The report in no way dismisses the problems caused by income inequality but it does show that there are numerous avenues for action available – including immediate ones that can have an impact.

Championing dignity – and its connections to equality, justice, freedom and non-discrimination within the wider human rights framework – and insisting that this must inform 21st-century economics could become one of the major strategies for transforming our mutilated world into something distinctly better in every corner of the globe.

For that, we need to face the realities laid out in detail in this UN report and think about economics that, in Solzhenitsyn’s word “will breathe the same air as contemporary society”. And we must consider the future.

The problem with a prominent UN report of this kind is that, while the evidence is incontestable and the diagnosis is spot on, there is little evidence governments pay it any attention when it comes to economic and social policymaking. This is despite the fact that most governments in the world have entrenched socio-economic rights in their law and make repeated promises to their electorates about their commitment to equality.

Similarly, while even bodies like the IMF have since 2014 repeatedly warned that escalating inequalities are bad for economics, bad for policy and bad for sustained growth (and that is a positive step), do they practice what they preach?

Governments should naturally be at the forefront of implementing the right type of policies, but, with corruption and elite capture prevalent around the world, they can often be vehicles for institutionalising inequalities rather than mitigating them.

Therefore, as so many times before, persistent and informed civil society mobilisation will be an imperative to act on the evidence provided by this report. It may be that nothing is inevitable on this, but no change will happen without transformative action. Otherwise, we will remain “caught in a trap” – but at a growing and possibly irreversible cost to humanity and the planet.

Steven LB Jensen is a senior researcher at The Danish Institute for Human Rights. He is co-editor of the anthology Histories of Global Inequality. New Perspectives published by Palgrave Macmillan in 2019. MC

Covid-19 and the fight for a new society

A pledge to build unity and solidarity during a global crisis

Education must continue throughout the pandemic

As the middle-class posts lockdown selfies, how are the poor coping?

The dignity of the damned