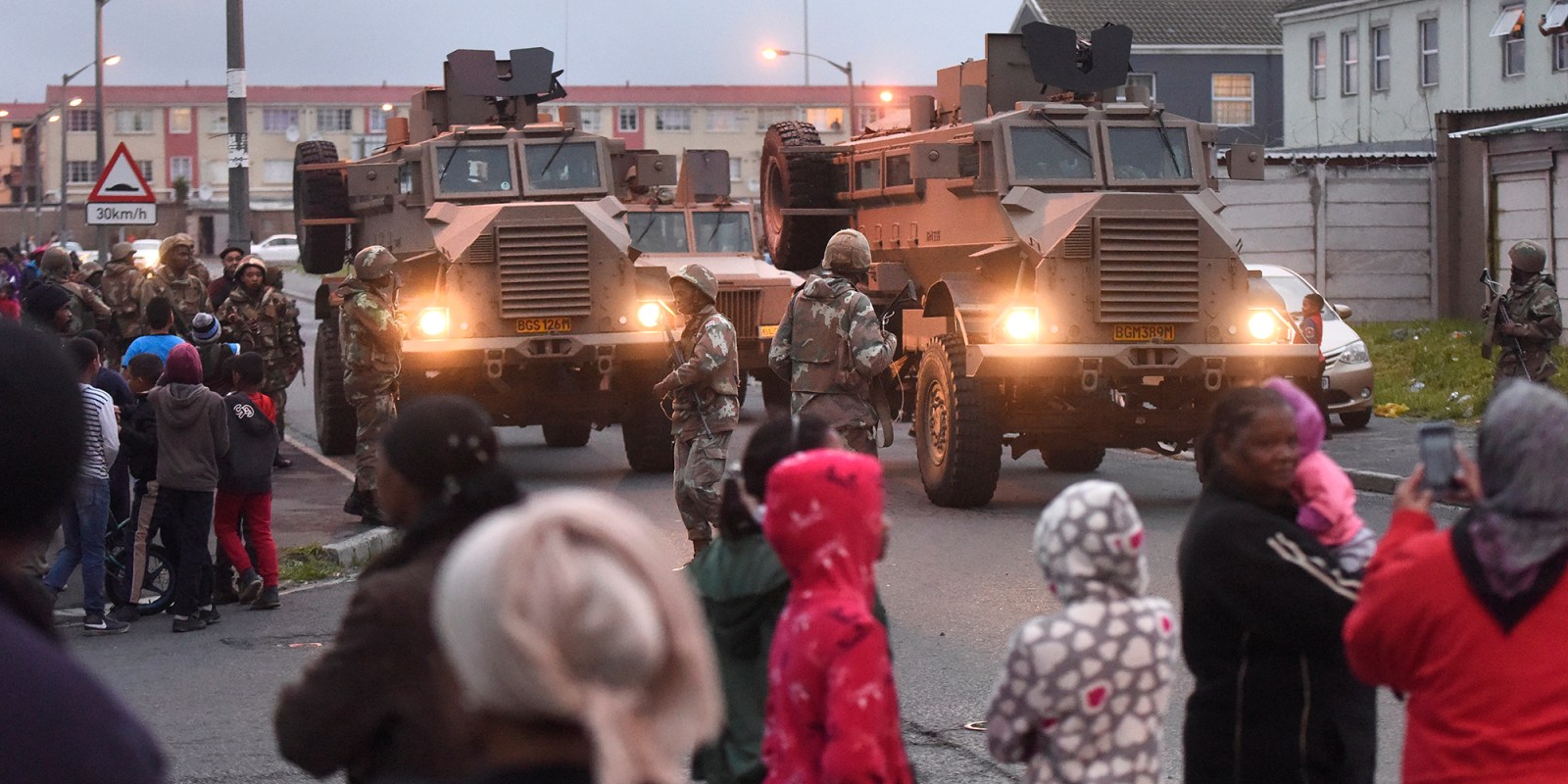 In March 2020, the South African National Defence Force is expected to conclude its deployment in gang-ridden areas of the Cape Flats. It will, unless extended by President Cyril Ramaphosa, be the conclusion of the almost nine-month Operation Prosper. What will the outcomes be? And how will we measure the success of the deployment?

Dr Irvin Kinnes, a research associate at the University of Cape Town’s (UCT) Centre for Criminology, addressed the complexities of evaluating the joint police─army operation during his two-day Summer School lecture, “Return to (dis)order? Policing gangs through the army”, on 13 and 14 January.

Kinnes, who grew up in Manenberg, a community long and deeply affected by gang violence, provided Summer School attendees with background of the deployment, challenges faced by and between the SANDF and the South African Police Service (SAPS), indicators to avoid when evaluating the deployment, his suggestions for the criteria to use, and a way forward.

He further noted that crime statistics revealed that murders in the Western Cape increased from 3,789 to 3,974 in 2018/19. Gangs accounted for 938 of these murders, 130 more than the previous financial year.

“We have got all the ingredients for a super conflict in this province,” Kinnes warned.

In addition to crimes are further challenges faced by official policing, including a lack of legitimacy for the police in many affected communities, the rapidly changing nature of gangs where the old rules of the 1980s and 1990s no longer apply, lack of resources, police infighting, and the continued politicisation of the gang problem.

Deployment of the army to the Cape Flats is not new.

Apartheid’s South African Defence Force was last seen on the Cape Flats in 1989, a deployment that resulted in civilian deaths. More recent deployments of the army to the Cape Flats include assisting police with the xenophobic violence in 2008 and 2012 and then in 2015, as part of Operation Fiela.

But this most recent call, argued Kinnes, did not originate from the affected communities.

“The call for the SANDF to bring peace and stability to the communities on the Cape Flats, which is the epicentre of the violence that we see unfolding … is chiefly manufactured by politicians,” he said.

Kinnes said that this call, which has been repeated many times, most notably by former Western Cape Premier Helen Zille, was picked up by the media, which then began interviewing affected community members and the call eventually grew louder.

Nonetheless, the army was deployed in July 2019 following an instruction by President Cyril Ramaphosa and approval that legislative criteria had been met.

Further challenges materialised in the early stages of the deployment: there were separate briefings, a lack of integration between intelligence structures and a further lack of collaboration between SAPS and the SANDF in communities.

Early on, there was also the need for SAPS to extend its priority areas list to include those identified by SANDF’s Operation Prosper.

“One immediately got the sense that there was [no] firm agreement between the leadership,” said Kinnes.

Then came the call by the SANDF for additional members on the ground, as it claimed its initial 421 troops were too few and that it didn’t have enough budget to extend the operation. It also requested its own intelligence, insisting it needed to understand the terrain in which it would be operating.

These changes midway through the operation, as well as probable changes to targets, present problems for the evaluation of the operation.

Kinnes made the point that evaluating success should not be measured purely on statistics showing a reduction in gang crime.

“Even if the crime statistics have dropped, one could not necessarily argue that it can be directly attributed to the role of the army,” he explained.

And while the statistics for the last six months have not been released, these alternative variables should be considered. Thus, the first criterion Kinnes suggested for operational success is the continued safety of the communities in which the operation was conducted. Is that community safer as a result of the deployment of resources of police and army personnel?

Secondly, is there continued existence of armed, organised gangs and what is the ability of these gangs to perpetuate their own operations?

“So, do those gangs still operate there? Is their leadership still secure [and] are they entrenched in the community, even after the operation has been deployed?” asked Kinnes.

The third indicator he identified is the financial and social costs of the operation. This must account for the cost of bringing soldiers onto the streets as well as what the outcome has been of that cost, namely, how have they interacted with the residents?

Unlike the police, the army has not consulted with the community. The police, on the other hand, are sometimes advised by community policing forums about the crime targets they should be considering.

Fourth is neutralising gang leaders by convicting them of their crimes. Kinnes’ evaluation is that this is yet to happen as a result of the operation, but that there are criminal trials of alleged gang leaders underway in the courts.

Kinnes’ fifth indicator for evaluating operational success is the reduction of firearms and shootings within the communities.

“We’ve had several operations on the Cape Flats, and more and more firearms have entered the community,” he said. “The gang war is perpetuated and goes on because we’ve not been extracting the requisite firearms that are used in these gang wars.”

Related to this is the reduction of gang-related crime as well as inter-gang, intra-gang, police gang and vigilante violence and the effect that violence has on the population.

‘I think that the fact that you’ve brought the army to civilian life has created false hope.’

The sixth indicator is the continued perception of safety by members of the community. While surveys frequently show that South Africans do not feel safe in their homes, and while Kinnes is not a proponent of bringing the army into civilian life, he conceded that their presence has made a difference in perception.

“A central thrust of evaluating police actions is the reduction of public fear of gang shootings,” he said. “I think that the one area [where the SANDF] has succeeded is that people are more confident to come out of their homes and go about their business … that is a positive outcome.”

The final measure of success according to Kinnes is that if the intention is to neutralise the gang, the ability of the gang to reproduce itself must be addressed. This entails how the gangs recruit, how they set up their leadership structures, who their seconds-in-command are and their social organisation.

Making “boots on the ground” a centrepiece of plans to reduce gang violence, said the criminologist, was insufficient. Instead, Kinnes strongly advised that government departments work together in an integrated fashion because the social conditions for the emergence and existence of gangs remain deeply rooted in poverty, unemployment, housing and health issues.

What must also be dealt with immediately is the infighting and the politicisation of the gang problem, which Kinnes calls “an indication of the lack of care and experience about the complexities that face people living in poor communities on the Cape Flats”.

“It’s politics that’s at the heart of us not being able to deliver proper resources and safety for poor people that’s really affected,” he said.

Kinnes also called for patience from the media and politicians to allow police and the army to carry out its operations. He further warned that a possible negative consequence of the army’s deployment is growing public belief that the police are unable to effectively manage the gangs. He predicts that the morale of communities to fight crime will be affected by this perception and will no doubt worsen post-deployment.

But it’s not all bad news.

Kinnes lauded the police’s national operational plan, Safer Festive Season, which they carried out in December. SAPS worked in tandem with the city’s and the province’s law enforcement agencies, as well as the SANDF. This, said Kinnes, was a level of cooperation last seen during the 2010 FIFA World Cup.

“It was a fantastic opportunity to see the level of cooperation between national, provincial and local government,” said Kinnes. “All three arms of government working together to bring down crime.”

“That’s how it should be on an everyday basis.” DM