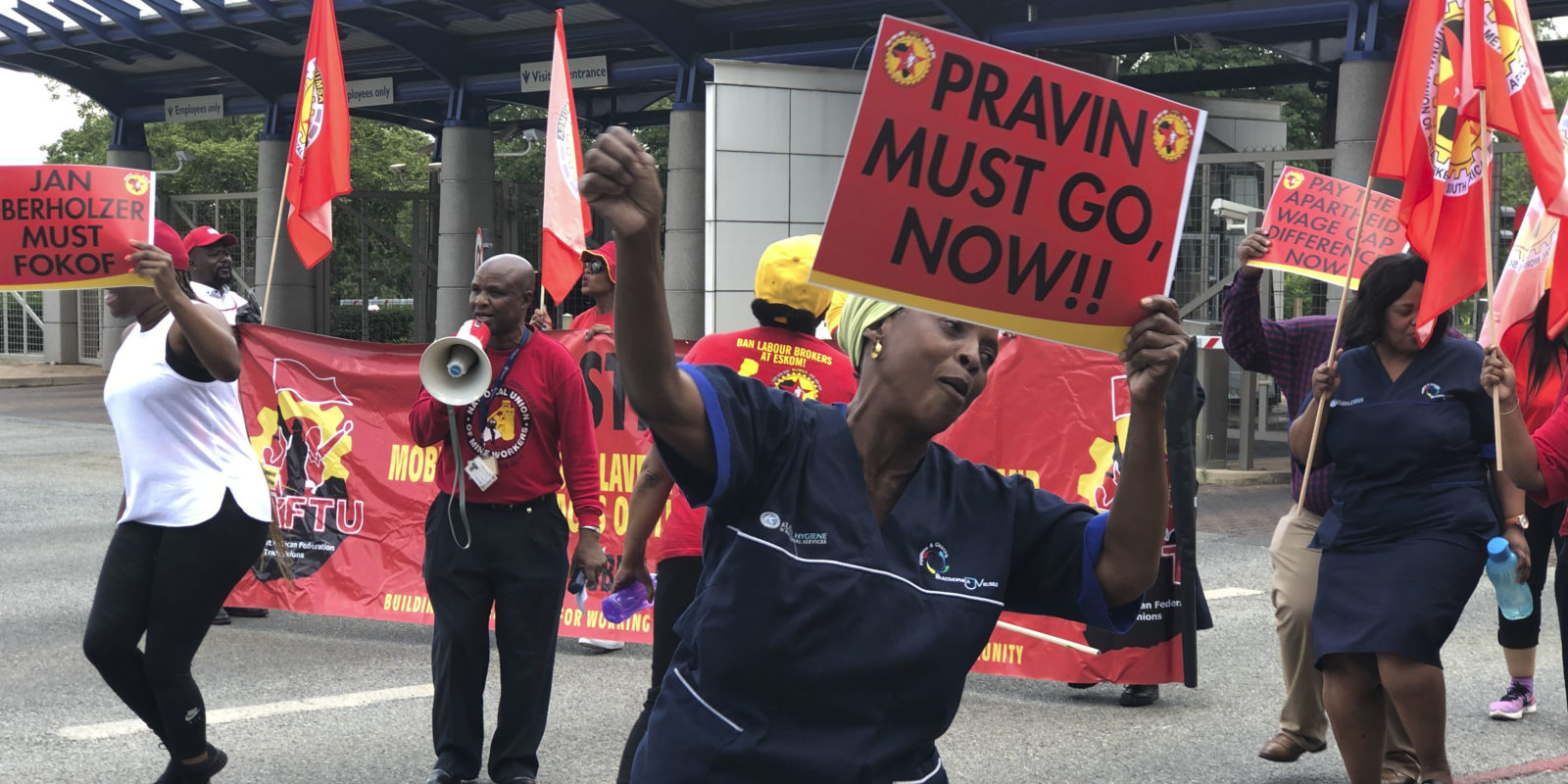 The National Union of metalworkers of South Africa and the National Union of Mineworkers picketed outside Eskom's Megawatt Park in Sandton on Wednesday 15 January, calling for Public Enterprises Minister Pravin Gordhan to be sacked. (Photo: Chanel Retief)

If it were up to the about 50 members of The National Union of metalworkers of South Africa (Numsa) and the National Union of mineworkers (NUM) who picketed outside the Eskom Megawatt Park offices on Wednesday, Pravin Gordhan would no longer be the minister of Public Enterprises.

The group joined growing calls in certain political sectors for Gordhan to be removed from his post over his handling of Eskom and its power-generating problems.

The EFF has also called for Gordhan to be fired, threatening to disrupt the State of the Nation address in February 2020 if he is not removed.

On Wednesday, the group, carrying placards that read “Pravin must go” and “Jan Oberholzer must f*kof”, said in a memorandum that they “fully support the national call that Pravin Gordhan must step down as the Minister of Public Enterprises and all his current members of the board to be removed; including the Chief of Staff Lwanda Zingitwa and COO Jan Oberholzer”.

“Any other minister who would have performed as poorly as he has in the last couple of years would have been fired,” national spokesperson for Numsa Pakamile Hlubi-Majola told Daily Maverick.

“You’ve got Eskom that’s on the verge of collapse. Clearly Pravin Gordhan does not have the skills to manage the SOE; he must be fired. It’s just that simple,” he said.

In a memorandum handed to Eskom management, the group demanded an immediate end to the unbundling of the power utility which was due to get under way at the end of March.

“This unbundling thing to us is part of privatisation,” Numsa member Nathaniel Kgoete, who attended the picket, told Daily Maverick.

“A key issue for us is that we don’t want privatisation,” he said.

The decision to unbundle Eskom into three separate state-owned entities, namely generation, transmission and distribution, was announced by President Cyril Ramaphosa during his February 2019 the State of the Nation Address.

But Numsa believes that unbundling Eskom will not solve its problems, arguing that the main issues with the parastatal are debt-related.

“[Eskom] is technically insolvent and by breaking it up into three parts, you’re not solving that problem,” said Hlubi-Majola, “Its debt levels are a result of the extremely high coal cost and renewable energy independent power producers, and that it has low sales volumes”.

The picketers also used the opportunity to voice their rejection of independent power producers (IPPs) as Numsa believes this is “crippling” both Eskom and the country’s economy arguing that their power generating supply was not consistent.

“If Eskom collapses we all suffer,” Hlubi-Majola said.

Zuki Qina, a technical engineer and Numsa member, said Eskom had to consider appointing a competent technician to take charge of the entity if it was to be saved.

He said there were competent people in Eskom who had a depth of knowledge and experience that could rescue South Africans from power outages.

“As a union, we believe that we’re stakeholders of Eskom and that the darkness is prevailing because of political interference in the form of Pravin who goes around mentioning plans and turnaround strategies on behalf of Eskom. Eskom is a technical entity, why would we want to take instructions from a government to run a technical state entity?” asked Qina.