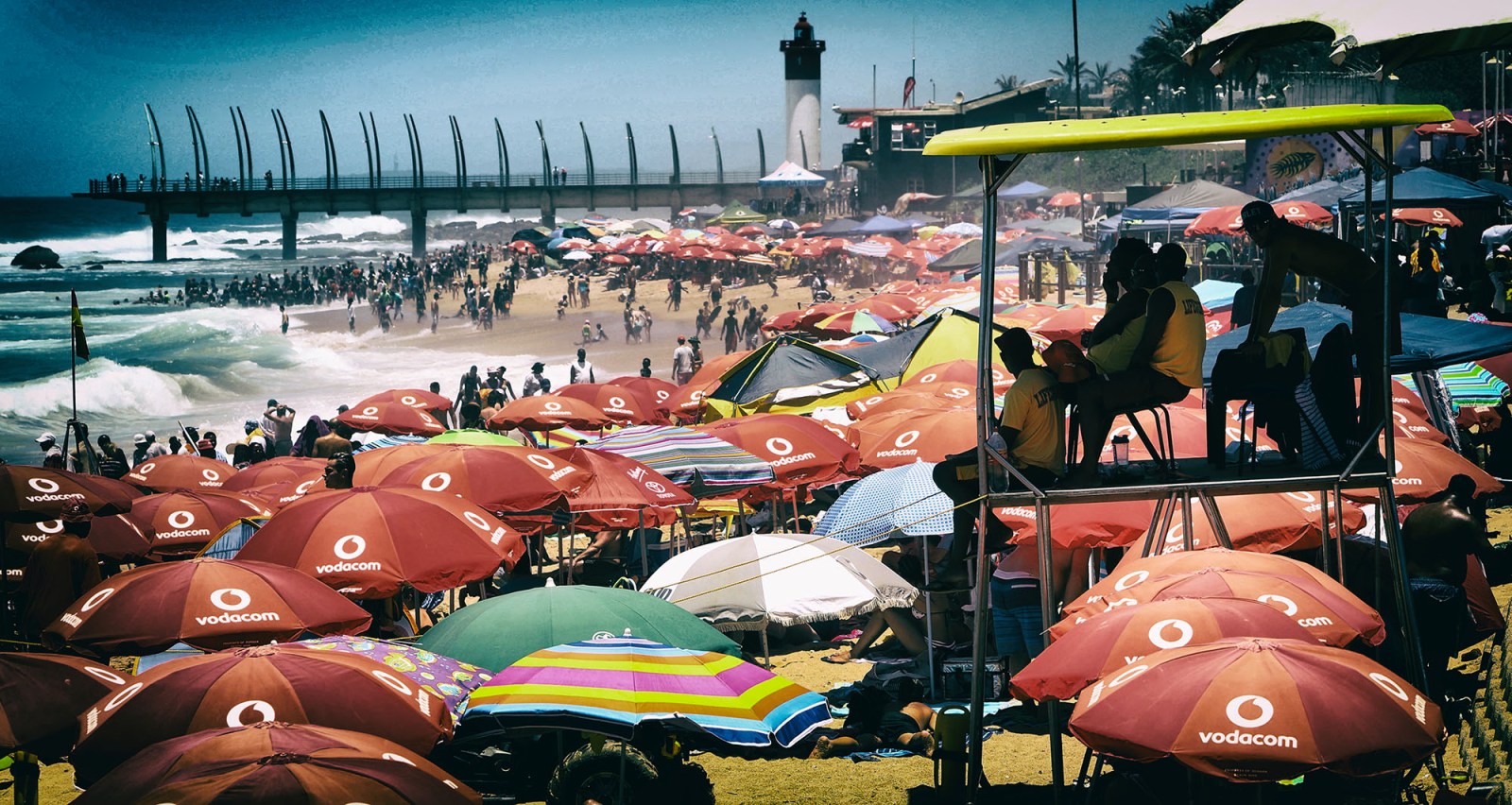 More than 300 holidaymakers have reported that they contracted a gastro bug after swimming at Umhlanga’s Bronze Beach. But authorities say the lurgy wasn’t in the seawater.

Holidays and runny tummies go together like New Year’s Eve and hangovers.

But after hundreds of fun-seekers fell ill in Umhlanga Rocks, Durban, over the festive season, many began suspecting it may be something in the water.

They are blaming sewage leaks near the town’s Bronze Beach and have accused the authorities of failing to warn bathers and not acting swiftly to staunch a flow of faecal matter into Umhlanga’s upmarket waters.

The municipality this week insisted; “seawater at the beach was clean during the festive season and to-date” but have promised a “thorough investigation”.

But the quality of the water at the height of the holidays has been questioned, amid revelations of a sewage leak on Campbell Drive, some distance from Bronze Beach.

While the municipality states water quality at Bronze Beach was tested and found to be within standard limits, an unofficial survey, compiled by a local property owner, Ivor Blumenthal, lists 370 people who developed gastrointestinal disorders allegedly as a result of swimming at Bronze Beach.

“We attended Bronze beach on 2 and 3 January (2020) without warning of a sewage leak. On the evening of the 3rd both my sons and my husband were ill with vomiting and diarrhoea and both my sons still had diarrhoea up until 8 January,” said one survey participant, Gisela Swanson.

The resort town, an affluent playground fringed by towering holiday flats some 20 minutes drive north of Durban, has been bedevilled by sewage leaks in recent times.

These include sewerage pump station failures and spills into the nearby Ohlanga River.

Leaks and spills have forced the closure of some Umhlanga beaches at least twice in the past year.

Umhlanga residents and businesses contribute a special levy via their rates to the Umhlanga Urban Improvement Precinct (UIP) to assist with the upkeep of the area.

Commenting on faecal contamination of Bronze Beach, the precinct’s spokesperson, Melanie Clarkson said: “Sewage leaks infiltrating the stormwater system which flow downhill and terminate at beachfront stormwater outfalls are indeed a great concern to all parties.”

But in this case, said Clarkson, sewage “did not flow into the sea but was contained within the sand on the beach in a cordoned-off area.”

She said the origin of the sewer leak – a burst sewer pipe on a private property in Campbell Drive above the M4 – fell outside UIP area, but had infiltrated Umhlanga’s stormwater system. The delay in the repair, she said, was due to the fact that the property owners were away until 6 January, 2020.

The area’s ward councillor, Nicole Bollman of the DA – who is also an estate agent in Umhlanga – said while eThekwini’s surf water reports had reflected swimming conditions in Umhlanga as being excellent over the December period, she believes these reports were outdated. She also advised that there are a few ‘hot spots’ along the Umhlanga Promenade that do affect bathers and people using the beach.

However, she said, there was no proof the people who suffered gastroenteritis in Umhlanga in December was due to contaminated water.

“My kids and I also went down with gastro, but had not gone anywhere near the beach,” said Bollman.

She said she had been alerted to a “sewer issue” above the M4 highway in mid-December by a resident who had originally reported the matter to authorities on 15 November 2019.

She shared with Roving Reporters details of recent communication with the UIP about the matter.

Precinct manager, De Wet Geldenhuys, told Bollman that a council contractor had attempted repairs only to find a broken sewage pipe closer to the coast, at 10 Campbell Drive, Umhlanga Ridge.

At a subsequent site meeting (after the property owners returned) it was discovered that 51m of pipe needed to be replaced on the property. This required clearing vegetation and approval for funding.

“Waste into stormwater cannot be prevented,” reads Geldenhuys’ summary report. “Current situation on the beach is that area is cordoned off and water contained on beach… Lifeguards to make the call for beach closure if necessary. Full report, as repair is ongoing, will follow.”

Blumenthal, who holidays regularly in Umhlanga, posted his questionnaire, “Umhlanga Sea Poisoning Survey” on Facebook and LinkedIn after three of his family members and “countless friends” fell ill in late December.

He said he had learned from discussions with lifeguards on duty at Bronze Beach, staff at two Umhlanga pharmacies and Netcare Umhlanga Hospital that many holidaymakers suspected that the cause of their illness was exposure to contaminated water at Bronze Beach.

By Monday, the number of survey respondents had climbed to 197 with 370 people identified as having become ill.

Blumenthal, 56, who is also the Johannesburg chief executive of Ark-Consult, a contract and conflict advisory firm, is now demanding to know why the authorities failed to close Bronze Beach, accusing them of inaction. He said: “My principal sense of anger is that the council knew in November already that there was a problem, and that they would only be able to deal with it after the 6th of January.

“There was not a single sign anywhere that the water was contaminated and that swimmers swim at their own health risk. The public and holidaymakers visiting Umhlanga have been consciously misled by this council,” said Blumenthal.

Roving Reporters contacted some of the people listed in the survey.

Mubeen Kolia said he and his son got sick after swimming at Bronze Beach on 5 and 6 January and were still struggling to recover. He said while he was still on Bronze Beach the sewage started pumping out and had a terrible smell. The water got dirty too.

Tina Becker said her family had also seen “sewage” pouring out of a stormwater drain in front of Hawaan View Flats onto Bronze Beach between 14 December 2019 and 6 January 2020.

“One thing I noticed is that water analysis which has been displayed for a very long time at the lifeguards hut (including E. coli and other levels) was no longer displayed this holiday,” said Becker.

No mention is made of levels of E. coli and enterococcus bacteria in the water – both associated with human faecal matter and key indicators of water quality.

eThekwini Municipality’s website includes a page dedicated to beach water quality. Users can look up details of some of the many beaches dotted along eThekwini’s more than 100km coastline.

The site this week gave a 14 January E. coli count of 20 cfu/100ml and 206 cfu/100ml for enterococcus – ratings of excellent and good, respectively – for Bronze Beach.

Netcare Umhlanga has yet to advise whether there had been an increase in the usual number of people presenting themselves with gastrointestinal symptoms, compared to their usual December numbers.

Pharmacists contacted for comment said a urine or stool test was needed to confirm elevated E. coli bacteria levels in the affected people.

These tests were usually done if gastrointestinal symptoms did not subside within three to five days of their onset. Blumenthal said he was not aware if any survey respondents were tested to check whether symptoms were due to exposure to E. coli.

In a short reply to a detailed list of questions this week, the municipality said no formal complaints had been lodged about contamination of Bronze Beach.

“We are not aware of any tourists or residents who have succumbed to any illness as a result of water contamination,” said municipal spokesperson, Msawakhe Mayisela.

He said the welfare of residents remained the city’s priority.

“Under no circumstances shall the city expose its important stakeholders to any health hazard,” he said.

Promising an investigation, Mayisela said: “We hereby make an undertaking that once we have finalised our investigation we will then communicate accordingly with all stakeholders.”

Heinz de Boer, the area’s former ward councillor and now a DA MPL in the KwaZulu-Natal legislature, said a notice of motion, tabled at a council meeting by the DA three years ago, had warned of dire economic, tourism and possible health impacts of regular sewerage infrastructure bursts in and around Umhlanga.

“Needless to say, no upgrade has taken place and Umhlanga’s reputation as a prime tourist destination is tarnished,” said De Boer.

The issue might also impact on moves to achieve Blue Flag status for Umhlanga beaches. Blue Flag accreditation is awarded to beaches that meet a number of criteria covering water quality, environmental information and education, safety, service and facilities. It is a powerful marketing tool.

Mayisela said repairs to the sewer in Campbell Avenue would be completed by the end of business on Wednesday, 15 January 2020. DM

This story has been updated. An earlier version incorrectly stated that the local opposition councillor, Nicole Bollman,  had denied the illnesses might have been caused by contaminated water. Bollman never said this, and had provided Roving Reporters with an account of actions she had taken to ensure the matter is thoroughly investigated.