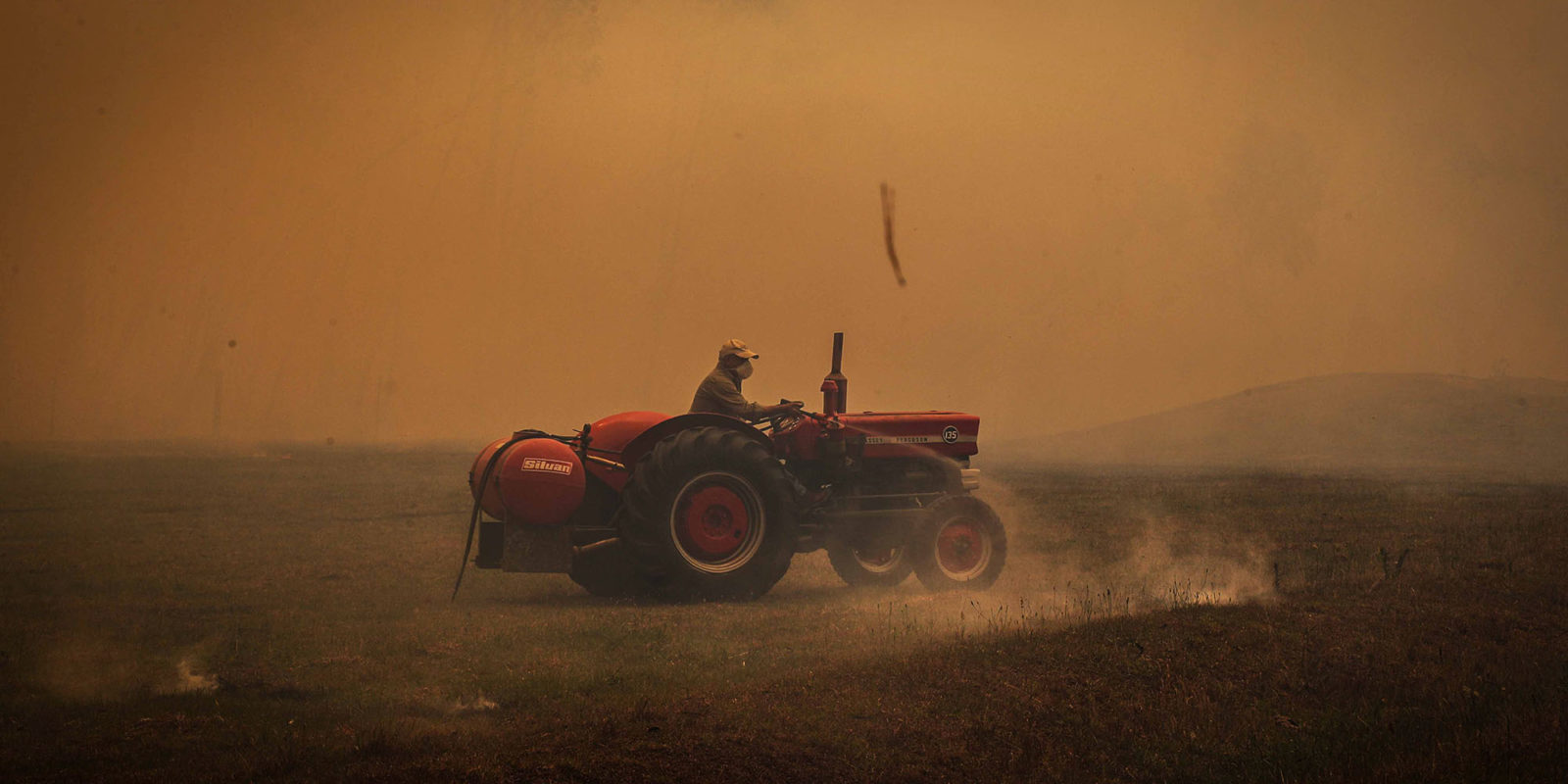 A farmer uses a hose to douse flames as he drives a tractor in a paddock where a large bushfire burns near homes on the outskirts of the town of Bilpin on 19 December 2019 in Sydney, Australia. (Photo: David Gray / Getty Images)

For years, the World Economic Forum has conducted a survey among its members and associates to assess the main risks that face the world at that moment. This year, environmental issues climbed to the top of the agenda and all five of the long-term risks the group specified are environmental, something that has never happened since the survey began 14 years ago.

Predictions are tricky, the saying goes, especially when it comes to the future. For the past decade at least, the World Economic Forum’s (WEF) jamboree in the Swiss ski resort of Davos has begun on a sombre note with the publication of the organisation’s survey of its members and associates views of the main risks facing the world.

It’s a difficult task, let’s face it. And a much-maligned one. The main criticism of the report is that it acts as a kind of echo chamber, reflecting a rarified, but more or less homogeneous, group’s view of the risks that face the world – it may be true for them, but do they reflect the world? Another criticism is that it’s all slightly misty, perhaps necessarily so, since agreeing on what constitutes major risks, or even major risk categories can be a bit of messy art. Hence, “data fraud” and “cyber attacks” have in previous years improbably popped up in the top five.

But this year, it’s different: The state of the global environment has subsumed everything else, including terrorism, inequality and global conflicts. Environmental issues have been on this risk agenda for some time, starting in 2011, but this year, they completely swept the board.

The report does split risks in terms of likelihood they will occur and separately in terms of their potential impact. The top five “likelihood” risks are extreme weather events, climate action failure, natural disasters, biodiversity loss and human-made environmental disasters. Even by the “impact” measure, three environmental issues are joined by another notionally “societal” issue, water crises.

In a way, the focus on environmental issues makes absolute sense; its the dominant issue of the day, with Australian wildfires and high-profile campaigners like Greta Thunberg ramping up the pressure on business, and governments.

But what is incredible is how much agreement there is. Larry Fink, the CEO of the world’s biggest asset manager, BlackRock, has just warned company boards to step up their efforts to tackle climate change.

Agreement, of course, except for perhaps the most high-profile participant of the 2020 event, US President Donald Trump, who has jettisoned American leadership on this and practically every other issue by adopting a contrarian position, in this case, of climate-change scepticism just at the moment the world more or less agrees.

The science is now ridiculously unimpeachable: 21 of the hottest years on record have happened over the last 23 years. But the deeper question was raised in a different report also published this week by Deutsche Bank: What are people willing to sacrifice in economic growth to reverse climate change?

The report suggests the challenge for policymakers will be squaring the public’s growing appetite for tackling climate change with the fallout from trying to fix it by shaking up transportation, power generation and industry.

Of course, other risks still feature. In fact, over 75% of the survey’s respondents put economic and geopolitical turmoil at the top of their concerns. Bloomberg reports Peter Giger, group chief risk officer at Zurich Insurance Group, told a press conference on the WEF report in London: “We are faced with a synchronised slowdown in the global economy. And we’re also faced with a situation where the ammunition that we have to fight a potential global recession is more limited.”

Then there is also the biggest risk of all: Unintended consequences, or to put it another way, the risks you cannot specify because, by definition, they cannot be seen. BM