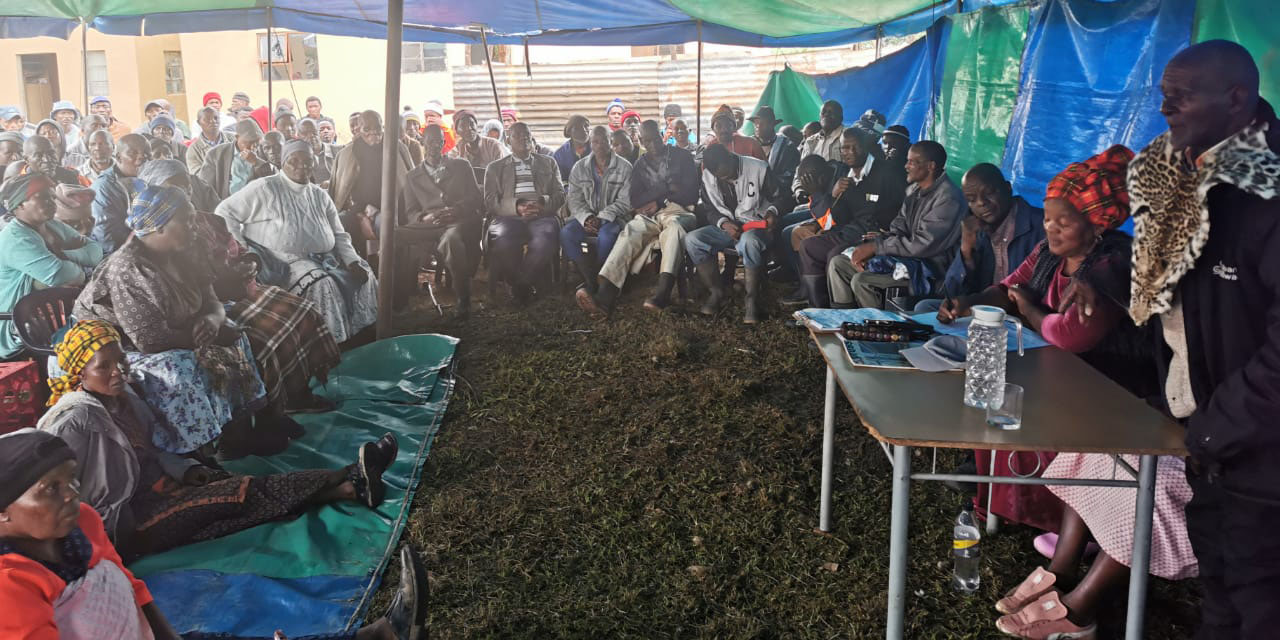 The entire community of Libode attended a meeting where it was decided to close down shebeens in the village. (Photo: supplied)

Following the deaths of two young men just before Christmas last year, the Libode community closed five shebeens in their village. While the Eastern Cape Liquor Board was careful not to discourage the community participation, authorities would not comment on the fines the community now levies against those who sell alcohol illegally.

An Eastern Cape community has closed down all the illegal taverns in their village following the murders of two young men. The traditional leadership has ordered that the shebeen bosses contribute to the funerals.

Speaking on behalf of the community, Sizwe Kupelo said the decision followed the deaths on 23 December 2019 of Bheka Jali and Sinoxolo Nogemane, the son of the community’s traditional leader, Chief Tembekile Daluxolo Nogemane. Five others were injured in a subsequent spate of violence.

Kupelo is a spokesperson for the Eastern Cape Department of Health, but was speaking in his personal capacity as a resident of Libode.

According to statistics kept by the Eastern Cape Department of Health’s Emergency Services, there were 739 cases of assault and trauma, excluding vehicle accidents, between 17 December and 1 January 2020 in the OR Tambo district, which includes Libode.

Kupelo said the Mkhankatho community met at the Zibawini Great Place on 23 December and resolved to embark on a mission to restore law and order by closing illegal taverns that had mushroomed over the festive season.

“We closed all of them except for one,” he said, “because the owner produced what looked like an operating permit. However, on Monday [13 January], the police arrived and conducted a search. When they scanned the permit, it was found to be fraudulent. The owner was arrested and they also confiscated his vehicle,” he said. “In my village, there is absolutely no shebeen at the moment,” he said.

“The decision to close the taverns that had been operating without licences was taken at a meeting attended by about 600 villagers, which included chief Nogemane, his traditional council, religious leaders, professionals, the elderly and the youth. We would also like to call on Police Minister Bheki Cele and Eastern Cape provincial commissioner Lieutenant-General Liziwe Ntshinga and the Eastern Cape Liquor Board to visit the area following the 23 December violence,” said Kupelo.

“We strongly believe an intervention by the police minister and provincial commissioner would lead to a decrease in crime in the area, which would also contribute to crime in the Mthatha policing area not reaching crisis levels,” he added. The Mthatha area has the highest number of murders in the province, according to official police statistics.

Kupelo said the owners of the illegal taverns were instructed to follow proper processes in applying for operating licences, while the meeting also resolved that the illegal shebeen owners and families of the men accused of the killings, contribute towards the funeral of the two men killed.

“This is to maintain the peace. The criminal cases continue at the same time. We call on the Eastern Cape Liquor Board to intervene by, among other things, having awareness campaigns, specifically targeting the youth and those who want to start businesses of selling alcohol,” he said.

“Working together, we can address social ills and crackdown on lawlessness. We have committed to working with the Libode police station to root out crime in Mkhankatho, but we need the police to play their part as they cannot outsource their duty of serving and protecting communities,” he said.

A spokesperson for the Eastern Cape Liquor Board, Mgwebi Msiya said the problem of illegal trading in alcohol is very big in the province.

“Our position as the Eastern Cape Liquor Board is that selling liquor without a valid liquor license is the contravention of the law and must be reported to the SAPS immediately. It is the sole responsibility of the police to deal with illegal trade in alcohol as prescribed by law.

“We also appreciate communities that help in fighting the scourge of illegal trading by reporting to the SAPS that have powers to arrest those people. The arrangements that seem to have been made through the traditional authority in that area is something that we do not want to comment on, except to insist that the law requires that anyone who sells alcohol illegally must be brought to the attention of the police to take the necessary steps in line with the law.” MC