Who shot up Poppy’s jazz joint? 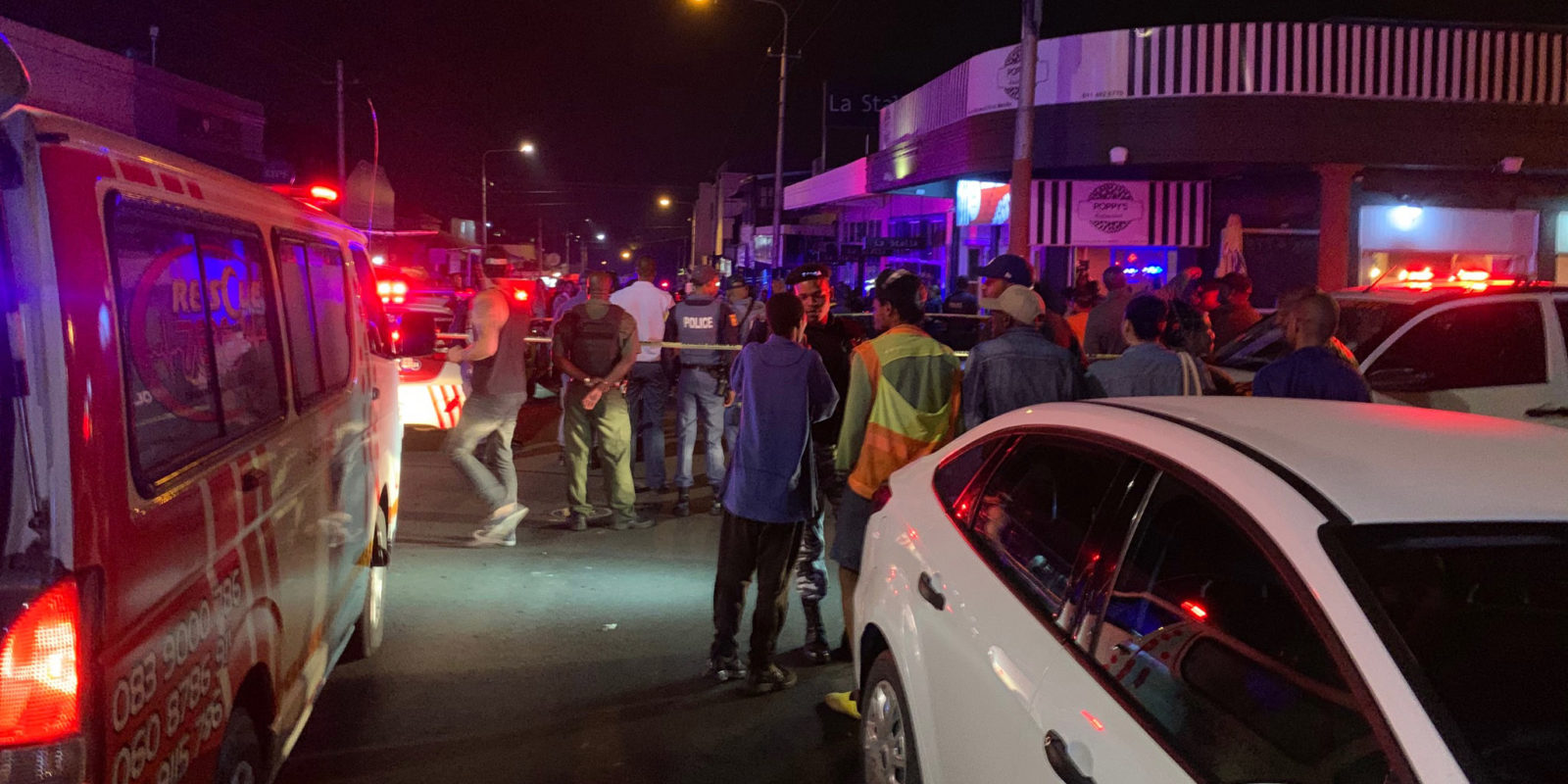 The scene outside Poppy’s restaurant in Melville, Johannesburg on New Year’s morning after an alleged drive-by shooting in which two people were killed and six injured. (Photo: Twitter / Jamaine Krige @jour_maine)

Fifteen days after a drive-by shooting in which two women died at a popular Melville food and music spot, there have been no arrests despite CCTV footage showing the faces of the shooters. We track the story of what happened at a favourite Joburg spot.

In the violence and high drama of Johannesburg, the year’s first big crime is receding into memory already — with no arrests despite political promises that they were imminent. If arrests are not made in the first 48 hours of an attack like this, the success rate diminishes, say crime analysts.

Minutes after midnight on January 1, 2020, at Poppy’s jazz joint in Melville, a black BMW SUV drove by slowly, spraying bullets into a kerb-side crowd. While revellers inside Poppy’s, situated on the hip 7th street, initially thought it was firecrackers to welcome the New Year, people fell to the ground, bleeding and hurt.

The CCTV camera footage is like something out of a movie: in grainy footage and with the lights of the bars and pubs twinkling, you see the shiny car approach, slow slightly and then as it moves on, people fall to the ground. Because there is no sound, it’s an even eerier scene — and the SUV drives away slowly, lengthening the confusion between real life and movies.

They had been shot in a crime that marks a fresh low in the urban terror that runaway gun violence has wreaked in Johannesburg. While hijackings, Rolex watch robberies and driveway hold-ups are par for the course now, the drive-by shooting is a new terror. As was a crime a little later on the first morning of 2020 as shooters fired into the VIP section of a party on Mary Fitzgerald Square in Newtown, Johannesburg. Eleven people were injured in that shooting.

Poppy’s is a party spot for many of my friends and occasionally for me too. The vibe. Music. The prawns. It is inter-generational and the crowd truly non-racial and drawn from across the smorgasbord of city life. It is a migrants’ spot too. The two women tragically murdered were Liana Petersen and Samantha Daniels-Basdew — the former from Cape Town, the latter from Matatiele near Kokstad. Both had come to Johannesburg to work. Petersen was there with her 11-year-old daughter; Daniels-Basdew and her husband Sherwin had arrived in Johannesburg recently in search of the better life the city of gold can sometimes deliver. She leaves behind two young children.

“Now I’m in this strange town without her,” Sherwin Basdew told TimesLive as he recounted his wife’s great love for family.

I am drawn to the story because a few days before, my friend had danced on the very tables the women and the other people who were shot were sitting at and standing by. We had all been inside enjoying that time of the year when Johannesburg lets its hair down and the festive sun and vibe kiss the tautness away. Poppy’s was jumping.

To read of it, blood-spattered and shattered, was shocking. It jolted me out of the way residents of South Africa’s Big Smoke can become inured to its appalling crime levels.

Who shot up Poppy’s and why aren’t they in jail yet? When next I visited, the place was a shuttered shadow of itself.

Flowers were placed outside, candles burnt in vigil; instead of crowds spilling on to the pavement, all you heard were the sounds of silence. The menu board usually advertising Poppy’s legendary chicken or prawns was chalked in its first words of 2020: ‘Rest in Peace’, a reminder of what had happened just days before.

A manhunt, but no arrests in 14 days.

As the headlines flashed around the country on the first morning of 2020, then acting premier Panyaza Lesufi announced a “manhunt” and said arrests were imminent. By last week, the manhunt had been downgraded to a reward and police spokesperson Brigadier Mathapelo Peters pulled back from the story of arrests being imminent. She told Daily Maverick that the police preferred not to announce these as it tipped off perpetrators.

“What we don’t want to do is put pressure on the investigators. Our investigators caution, ‘don’t say things like that’.

“When we get to the stage of a reward, it means there were witnesses. It is an incentive for them to come forward.”

As the CCTV footage reveals, the shooters were so insouciant that they drove slowly past people walking in the street before slowing down to take aim at Poppy’s. But until now, the primary source of information has been the six people who were shot. Peters says a manhunt is a “multi-disciplinary organised search of more experienced detectives”. Reporting straight to the head of organised crime in Gauteng, the team includes crime scene experts, ballistics experts (to examine the bullets and work out which type of firearms they came from), crime intelligence and the cyber-crime unit, but they have not yet come up with anything, although they may be close.

Security sources told the Daily Maverick that the faces of the shooters are clear in the CCTV footage. Peters will not confirm or deny this, but she says the police have facial recognition capability. The number plates on the car were false. So why have the shooters not been caught?

“We are still exploring all possibilities,” says Peters who says that “accessing victims (of the shootings) has been difficult”. Sources who spoke to Daily Maverick say there was infighting among the police which has slowed the investigation and possible arrests.

But anti-crime activist Yusuf Abramjee is not buying it.

“The old ways of policing are coming to an end,” he says, meaning that CCTV cameras, mapping and other technologies offer new ways of making arrests more quickly. The cops are working in analogue in a digital world with new tools. “Videos (CCTV and mobile phone footage) are creating awareness.”

Are the police able to map and link different forms of footage to follow perpetrators at least digitally?

“The police are fast asleep. Half of the detectives don’t have computers. Each of them is working between 100 and 400 dockets. (I know) detectives working out of their cars. Half the time they can’t make calls because they don’t have airtime. (Police management) don’t give them proper smartphones. There is no embrace of technology,” says Abramjee, who works with many police officers.

“(The police emergency number) 10111 is useless,” he says, a fact mirrored by social media posts which reported that calls to the line from the Poppy’s shooting went unanswered for a long time. Local private security had to cordon off the crime scene.

“Criminals know (how ineffectual the police are). We are dealing with a full-scale war. Criminals are so brazen they don’t even cover their faces,” says Abramjee, who posts between 10 and 20 crime videos per week to his social media feeds in a one-man campaign against crime. Peters says the detectives on the two cases are on dedicated service and that expertise has been roped in from the national police too. The police are working with Vumacam, the anti-crime camera project of Vumatel, the fibre cable company.

“I can assure you that detectives get top priority for mobile phones and there is always a standby officer available to load data,” she says.

‘Your music is disturbing our peace’

“I opened on Wednesday and people came in. They said ‘we have to reclaim our space’. The shooting had nothing to do with what we do at Poppy’s.”

She checks in with the cops on progress every day and she has just finished a call with the family of Leanne Petersen who was being in buried in Cape Town last Saturday, 11 January. She has also been visiting the shooting victims at Helen Joseph hospital, the sprawling public hospital around the corner in Auckland Park.

Except for one person, none of the other people had private medical aid and several were entertainers for whom Poppy’s joint is an opportunity to earn a little something at the weekend gigs.

“It’s a springboard for giggers,” she says. But DJ Max was shot as was actor and singer Mortimer Williams. Poppy’s started life as a restaurant but it has morphed into a music venue too — the food’s great; so is the music. But not everybody likes that.

It has a testy relationship with the local councillor and with residents who often send the cops around. Rajah says one of the first things the police wanted to see was her licences and other media alleged she did not have proper papers.

“They don’t like the colour of the people who come here,” says Poppy, who says that on the various associations formed to manage Melville, people talk about a “(bad) element” who visit. When I started (she owned a different café across the road), a black female had never occupied the place”.

Once, someone daubed the words “your music is disturbing our peace” across the walls. Rajah refers repeatedly to “deep racial undertones” in the hood but she discounts the retribution rumour that the shooters may have been part of a fight in the venue who returned as revenge.

“There was no trouble,” she says, adding that “in nine years, the biggest thing that happened was when a woman klapped (slapped) her husband for looking at another woman.”

Who shot up Poppy’s?

Despite the promise of quick action, it has been two weeks since the drive-by shooting in Melville and the mass shooting on Mary Fitzgerald Square. There has been no breakthrough despite the manhunt around the clock. As the frenetic pace of Johannesburg life and crime picks up, this case could also turn out like so many other unsolved murders as life gets cheaper and more violent.

One security expert who is informally assisting the investigation says the shooting may be gang-related. Melville abuts Westbury, which is like the ganglands of the Cape Flats — ruled by gangs for decades. Bosses play in the party street of Melville and the drive-by may be a gang initiation. It may also be business rivalry or a new form of terror on the urban party zones that define Johannesburg.

Increasingly, city street crime, like the attack on Poppy’s, is captured on camera, but with a police service overwhelmed by infighting and poorly resourced where it matters, the perpetrators stay on pixels and not in prison. DM