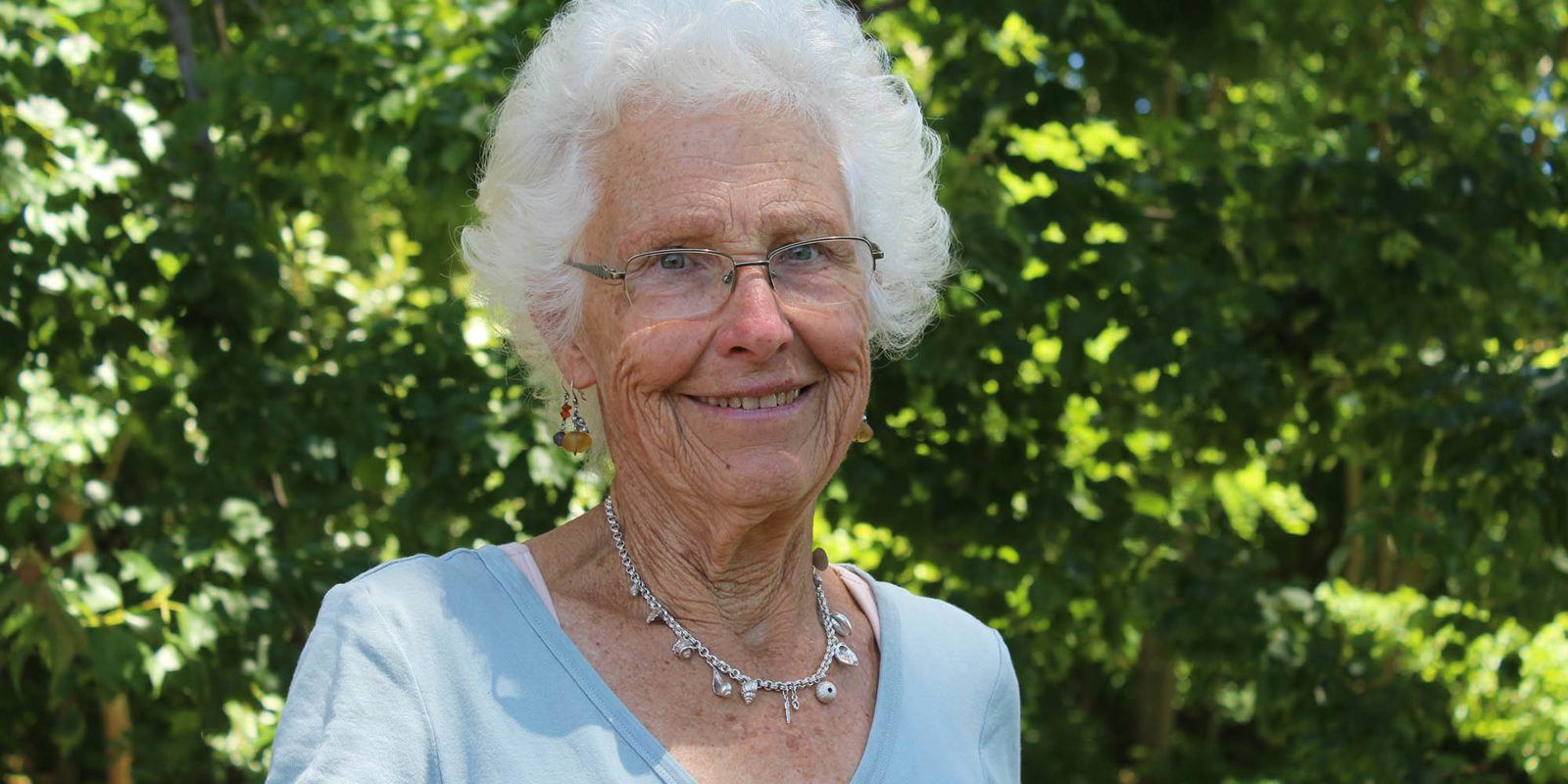 Pat Featherstone, the founder of Soil for Life, comes from a long line of women who grow food. (Photo: Melanie Farrell)

The founder of non-profit Soil for Life talks about her wild and free childhood surrounded by women who grew food, her love of teaching and a world filled with home gardeners.

“Come and have a quick look at our new bug hotel,” says Pat Featherstone, the founder of non-profit Soil for Life, based in Cape Town’s Constantia.

We wend our way through the abundant garden, dancing with butterflies and bees, to the bug hotel’s construction site.

Edward Kennedy, who handles maintenance at Soil for Life, has stripped an old cupboard of its doors and is filling it with various bug-friendly attractions. Old twigs, hollow bamboo and pine cones, all found in the garden, tucked away behind Waldorf School in Constantia. Bugs (and children) are going to love it.

Featherstone leads me back through the garden to the shed where five dogs are waiting to greet us with much slobbering and good-natured shoving. “Four are mine, the other one belongs to one of my three daughters – he’s coming home to Kommetjie with me,” says Featherstone.

Once we’re settled and the dogs have calmed down, we start talking about Featherstone’s passion for growing food and what led to the founding of Soil for Life.

Featherstone, 72, grew up in Zimbabwe (then-Rhodesia), one of four daughters, and one in a long line of women who grow their own food.

“I think the women in our family passed on their love of gardening and growing food. I remember my mother always had her bum in the air because she would be down on her knees gardening. It was her passion. My grandmother, too, was a great gardener: she grew vegetables and had fruit trees, everything.”

She recalls an idyllic childhood. “I remember the freedom my mother gave us. She allowed us to explore on our own and I went everywhere on my bike. We would ride from Harare to QweQwe, climb trees, play in the mud, and it was amazing.

“I was outside all day and my clothes would get destroyed in the mud. This was the only thing that annoyed my mother because she used to sew our clothes by hand and handknit our socks. So finally she made my sister Wuzzy (Louise) and I rag dresses and she wouldn’t let us wear socks. So we were barefoot, but I didn’t mind, I preferred it. She even made us knickers out of old flour bags.

“I was a bit wild,” says Featherstone. “I used to do things that other people didn’t like and was always getting into trouble.”

When she graduated from high school Featherstone went to Harare University to do a BSc and graduated with a BSc Hons.

“At the time the (Zimbabwe) government offered you a free degree if you went into the sciences, so I did zoology and biochemistry,” says Featherstone. “I didn’t work very hard and got three warnings from the dean for three years in a row.”

Degree in hand (“I studied for those final exams!”) she worked as a teacher for the Zimbabwe government for three years to pay off a loan she’d taken out while she was studying and discovered that she loved teaching.

Featherstone moved to Cape Town with her then-boyfriend (“who became my husband”) and taught at Camps Bay High and Sans Souci in Newlands but became disillusioned and left the profession abruptly in 1992.

“One day I was marking exam papers at a boys’ school I was working at when I realised I couldn’t carry on teaching in schools, and walked out. I resigned the next day.

“I was very depressed because my marriage had ended and I’d left teaching. I was floating around not sure what to do with myself when someone suggested that I set up a food garden at the Waldorf School in Constantia, and I did that. It got me out of my rut and then I started working for the Food Gardens Foundation, teaching people how to grow their own food.”

In 2002 Featherstone left Food Gardens and set up Soil for Life, with a focus on growing community gardens on the Cape Flats.

“I believe that everyone has their own gift and mine was being able to teach and my contract is to help people, to serve humanity,” says Featherstone.

“We have diversified a lot since we started. We used to work with communities, setting up community gardens, but there was poor retention once we’d set up a food garden.

“People weren’t motivated to keep the gardens going because there was no sense of ownership so we decided not to do community gardening any more and work with home gardeners.

“Home gardening has been much more successful. We have trainers who work with home gardeners in different areas and the idea is that you should be able to walk from one home garden to the next, so there’s a community of gardeners to encourage people to stay in contact with one another after the workshops. And they do.”

Uncle Vuyo lives in Delft. He is 70 and 25 years ago he lost his sight:

“I was sitting at home and doing nothing so I decided to start working in the garden. I make my own compost and sell my vegetables. It keeps me fresh.”

Fareda, who lives in Mitchells Plain, is a soft-spoken woman with a love for growing vegetables in her small backyard, using containers, including tyres, to create steps that make use of vertical space.

“We have found that people are lonelier than ever before and our courses have brought them together and created communities.

“We have an amazing retention rate of 83% and that’s since we decided to focus on showing people how to grow their own food at home. They are invested in it and it’s much easier to garden on your home turf, even in a small space. You should see the lovely fresh produce that our home gardeners grow.”

Health is dear to Featherstone’s heart after her heart stopped working in 2013. “No one knew what was wrong with me,” she says, recalling her collapse in the grounds of Soil for Life.

“I had a series of small strokes and then a big one, here, outside in the mulch.” She points to a pile of mulch near her office. “I just keeled over and Edward (Kennedy) found me.”

After Featherstone’s collapse six years ago, doctors discovered that the left ventricle of her heart was barely pumping. She was in ICU for six months and was told that she was days away from death.

It’s a dramatic tale and the next part of the story is equally alarming. “A doctor hijacked me from my hospital bed and took me to another hospital where I had surgery to fit a pump next to my heart to keep the left ventricle pumping,” says Featherstone. The pump is powered by a battery that she wears around her waist 24/7.

Most people would probably take it easy if they had a heart pump but Featherstone’s idea of “taking it easy” involved “more teaching and less actual gardening”.

“During those six months in hospital I looked at everyone around me, including the nurses and visitors, not just the patients, and a lot of people were overweight, breathless and eating really badly. They were making themselves ill. It’s all down to lifestyle and what we eat.”

Once she was out of hospital and strong enough to go back to Soil for Life, she introduced health and well-being courses alongside the home gardening courses that Soil for Life runs on the Cape Flats.

The idea is that you first learn how to grow your own organic vegetables and then you learn about health and well-being.

“But it doesn’t always work that way so sometimes people do it the other way around,” says Featherstone.

What do the well-being courses cover? “We talk about meditation, mindfulness, gratitude (we light candles in a gratitude ceremony), the chemicals in our so-called ‘food’, glyphosates on our vegetables,” Featherstone pauses.

“And the importance of exercise, breathing and we’ll do a cooking session where we show how easy it is to substitute unhealthy food for healthier versions.

“We made up a big batch of hummus and used it as a substitute for margarine (polyunsaturated fats, another lesson). Everyone on the course was raving about how good it tasted and how easy it was to make.

“And it’s not only food. We talk about neurotoxins in the skincare products that we use and how easy it is to make your own deodorant using some coconut oil and bicarb.”

Featherstone is very particular about the food she eats and where it comes from, sticking to a diet high in fruit and vegetables. “I’m basically vegetarian but I have milk kefir and I eat eggs, but only my own eggs from the chickens I have at home. Or I’ll eat the eggs from the Soil for Life chickens.”

We’ve been chatting for more than an hour, sipping at our kombuchas from the Soil for Life shop (where a barista is making good, strong coffee), and I suggest we go outside for some photos.

Featherstone, who received a Lifetime Achievement Award from Enviropedia’s Eco-Logic Awards in 2019, says, “To be honest I’m not interested in awards but I’m happy to accept them if it helps to promote Soil for Life.” DM