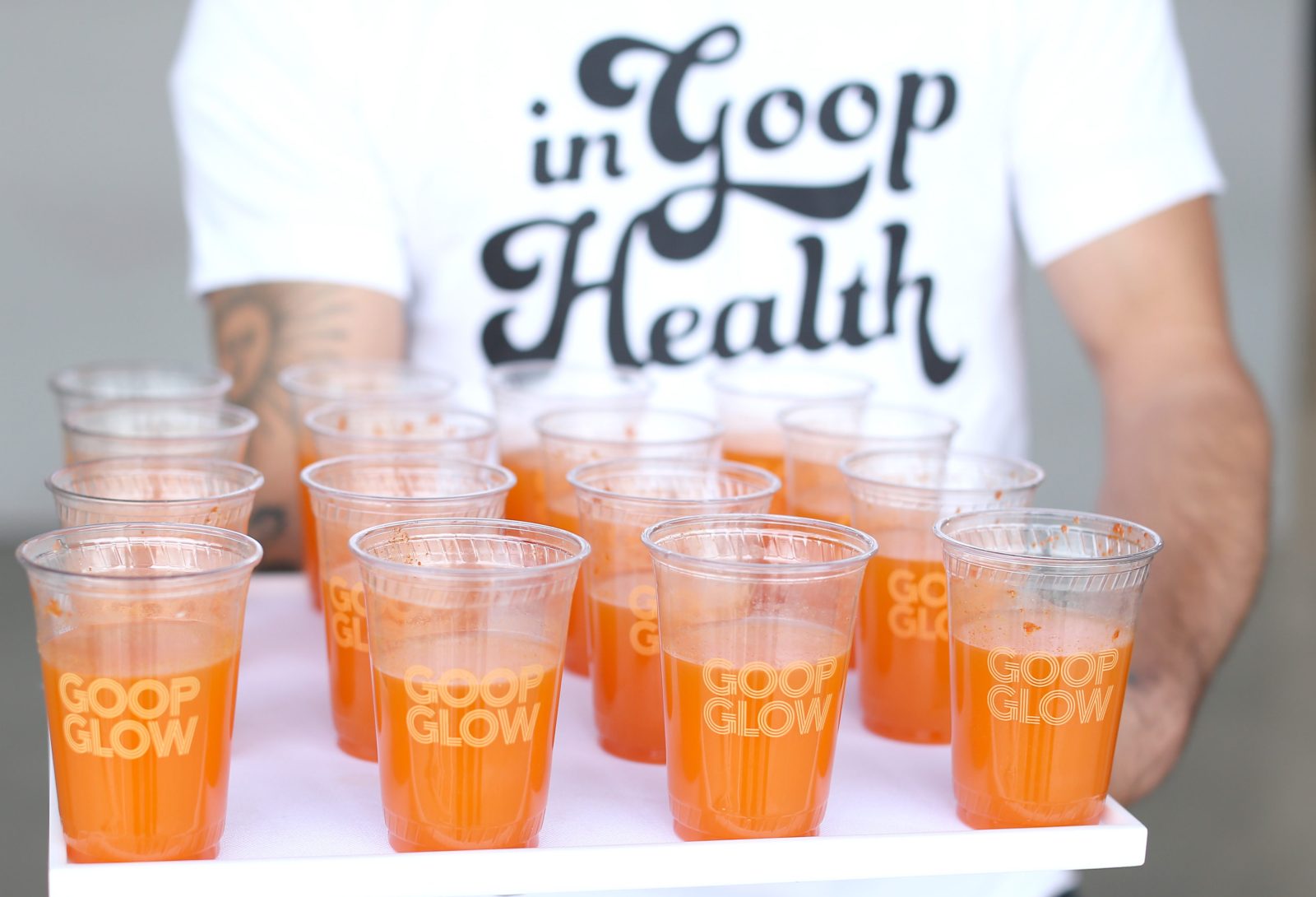 Drinks on display at In goop Health Summit Los Angeles 2019 at Rolling Greens Nursery on May 18, 2019 in Los Angeles, California. (Photo by Phillip Faraone/Getty Images for goop)

The wellness industry is a multi-billion dollar behemoth promising optimal health through supplementation and other methods. Does science back their claims?

“The marketing and selling of multivitamins, and supplements to the general population is perhaps one of the most successful marketing ploys of pharmaceutical companies since we started making medicine. If you have a normally working gut and you do not have a severe malabsorption disease, or if you don’t have a documented vitamin deficiency, like vitamin D or vitamin B12, you do not need routine vitamin supplementation,” says Cape Town-based endocrinologist, Dr Jocelyn Hellig.

“Our stance on that as a medical fraternity is quite clear: there is no evidence for routine multivitamin supplementation in people who do not have documented vitamin deficiencies, or a malabsorption syndrome.”

Dr Jacques Badenhorst, a gastroenterologist based at the Netcare Christiaan Barnard Memorial Hospital agrees: “If you have a proven vitamin deficiency, then by all means replace your vitamin levels. But this whole emphasis on micronutrients and replacing them, that’s just nonsense because most people get in whatever nutrients they need from a normal diet. If you’re following a specific diet, like, let’s say you’re vegan, then you know that you’re not getting your vitamin B12 because the only source of vitamin B12 is animal protein. So in that case, you would take a supplement.”

According to a paper titled “Enough Is Enough: Stop Wasting Money on Vitamin and Mineral Supplements”, published in 2013 by a team of American and English doctors from Johns Hopkins Medical Institutions, Warwick Medical School and the American College of Physicians, not only is there no evidence of the efficacy of vitamin supplements, but some may be harmful: “β-carotene, vitamin E and possibly high doses of vitamin A supplements are harmful. Supplementing the diet of well-nourished adults with (most) mineral, or vitamin supplements has no clear benefit and might even be harmful.” This is a conclusion they came to after reviewing three trials of multivitamin supplements and 24 trials of single or paired vitamins that were randomly assigned to more than 400,000 participants.

In addition, they also evaluated the efficacy of a daily multivitamin to prevent cognitive decline among 5,947 men aged 65 years or older and after 12 years of follow-ups, “there were no differences between the multivitamin and placebo groups in overall cognitive performance or verbal memory”.

The global vitamins and dietary supplements market was valued at US$132.8-billion in 2016 and is projected to grow at a compound annual growth rate (CAGR) of 8.8% up to 2022. Locally, that market was valued at R3.8-billion in 2016, according to statistics published by pharmaceuticals company, Pharma Dynamics. According to that same poll, “almost half (46%) of South Africans take a daily health supplement to boost their immunity and overall well-being.”

Immunity boosting is indeed one of the promises made by lots of manufacturers of pills and herbal mixtures. However, doctors and scientists are yet to find evidence that taking an immune booster makes a difference to one’s immune system.

“You can’t do anything to boost the immune system. People who have immune-suppression, or a compromised immune system, like people who have severe medical conditions like advanced HIV, advanced cancer, or who are on very toxic drugs like chemotherapy, or hydro corticosteroids, in some of those instances we give very special medication to boost that immunity. But for the average healthy person, there is nothing you can do to boost your immune system,” says Dr Hellig.

According to Harvard Health Publishing, the media division of the Harvard Medical School of Harvard University, there are fairly standard practices that one can incorporate into their lifestyle to ensure that the immune system functions properly: Don’t smoke, eat a diet high in fruits and vegetables, exercise regularly, maintain a healthy weight, if you drink alcohol, drink only in moderation, get adequate sleep, take steps to avoid infection, such as washing your hands frequently and cooking meats thoroughly. And lastly, try to minimise stress.

As for immune-boosting medicines and supplements, the university’s view is that “the concept of boosting immunity actually makes little sense scientifically. Attempting to boost the cells of your immune system is especially complicated because there are so many different kinds of cells in the immune system that respond to so many different microbes in so many ways. Which cells should you boost, and to what number? So far, scientists do not know the answer.”

In addition to vitamin supplements and immune boosters as a way to achieve optimal wellness, there are any number of herbal mixtures and diets that promise to rid the body of toxins.

“Do you have a liver? Do you have kidneys? Then you are detoxing. Those two organs are your detoxing organs; this concept of detoxing is just a complete invention. We all are exposed to toxins. Our diet generates toxins because of the way food is broken down. You can’t try and augment, or improve your body’s ability to get rid of toxins because it’s just not physically possible; your body takes care of that,” says Dr Badenhorst.

He also notes that beyond supplements and diets, the popularity of colon cleanses, the practice where the colon is flushed by sending litres of fluid into it through a tube into the rectum could be potentially dangerous: “There aren’t really any toxins in your colon. There’s really just faecal matter and very healthy bacteria that your body needs to support your health. I have a problem with it because it has no benefit, but there’s a potential risk associated with it. It could potentially injure your gut wall.”

Although colon cleansing has become popular again in recent years, the practice was already discounted by the American Medical Association back in 1919. More recently, in a study published in 2011, a team of researchers from the Georgetown University School of Medicine, examined 20 previous studies, and came to the same conclusion that there is no evidence that colon cleanses work, but indeed could lead to bacterial complications and punctures.

As for the popular apple cider vinegar as a daily supplement for gut health and weight loss? “It’s basically expensive salad dressing, but it’s not going to do anything for your gut health,” says Dr Hellig.

According to the Harvard Medical School, although there is no evidence of the purported health benefits of drinking apple cider vinegar and there are potential risks: “Its high acidity can damage tooth enamel when sipped ‘straight’. It has been reported to cause, or worsen, low potassium levels. That’s particularly important for people taking medications that can lower potassium (such as common diuretics taken to treat high blood pressure). Vinegar can alter insulin levels. People with diabetes should be particularly cautious about a high vinegar diet.”

“Good general health means generally preventing cardiovascular disease, it’s preventing you from dying from heart disease because that’s why most people die,” says Dr Hellig. Both she and Dr Badenhorst, as well as the Harvard School of Medicine and the World Health Organisation recommend sticking to a balanced diet and regular exercise.

“A Mediterranean style diet has been consistently proven to reduce cardiovascular disease long term. That’s the number one thing. Number two is you can exercise. So the recommendation is at least 150 minutes per week of moderate-intensity exercise.”

“Then, in terms of keeping healthy, I would advise things that are evidence-based and scientifically-proven. Those are things like getting your vaccinations up to date, having a flu vaccine if you fall into the category where you need one. If you are a woman, go for regular pap smears after the age of 30, and going for regular mammograms after the age of 40. If you’re a man, have your prostate checked. Check your blood pressure and check for diabetes. There is nothing weird and wonderful on the market that is going to help you live longer.” ML