Eastern Cape drought: ‘Hope is our only choice’ 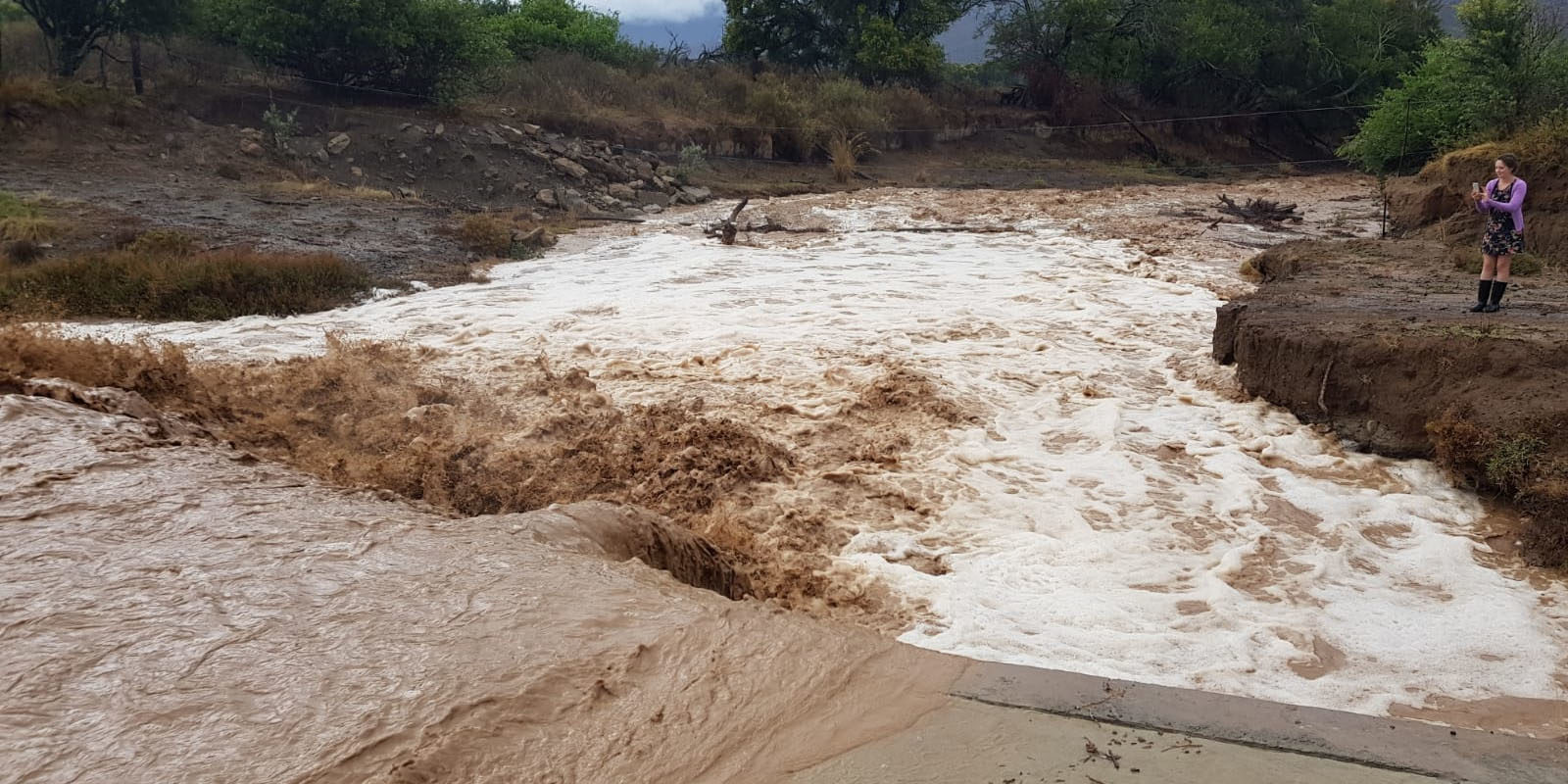 As good rains fell in the drought-hit Karoo for the first time in months, communities were talking of nothing else. Every farmer knew exactly to the millimetre how much rain they had and when, and were anxiously watching the sky and the field for what is known as ‘follow-up rain’. But for the communities in Karoo towns, while many celebrated the first real summer rain of the season by running around outside, the struggle for potable water continues.

“Hope is now our only choice,” said Peter Knoesen, a farmer and the chairperson of the Steytlerville Agricultural Society. In the Karoo, hope comes in degrees of rain: Soft, hard and thunderstorms, and it is measured in millimetres. The first 10 days of January were filled with hope. “We are watching the field,” said Knoesen. “It will take a few weeks, but we are watching to see what the rain did.”

Last week, some welcome rain showers were recorded over the Karoo.

Garth Sampson from the South African Weather Service in Port Elizabeth, said the total rainfall for Fort Beaufort was 80mm with Makhanda measuring 49mm and Graaff-Reinet 41mm. The main catchment area for dams in the Nelson Mandela Bay district received between 10 and 46mm, according to Sampson, with the Langkloof Uniondale area receiving 20mm and Willlowmore 28mm. Cradock received 37mm.

“Although this rain is great for the garden, it has not broken the drought,” said Sampson. He said in 2019 almost every weather station in the western part of the province had record low figures. “This area received an average of only 57% of its total annual rainfall, with Grahamstown being the worst at 46%. The eastern half of the Eastern Cape faired better receiving 78% of its yearly total.

Sampson said 2019 was “one of the worst rainfall years in 120 years along the south coast and especially the Nelson Mandela Bay Metropolitan area and surrounds.”

He added that the region should steel itself for more bad news as the long-term forecasts are not promising and added that the area was overdue for a flood.

“Considering that we are well overdue for a flood of the proportion of 1908, 1968 and 1981, coupled with the warnings of the advocates of climate change, a serious extreme event is on the horizon. When exactly is the big question,” he said.

The Nqweba Dam is still at 0%. “We are still without water,” she said. The Beyers Naude Municipality claimed their boreholes were struck by lightning, damaging equipment and were also not working due to load shedding. Communities are currently only receiving 200 litres of water per day from the municipality, according to a notice posted by them. Conradie, who also helps Gift of the Givers, said they had to fill their water tanker seven times to ensure everyone in town had some water at least.

“The rain also healed something in the animals,” said Zola Hanabe from the Emerging Farmers Association in Graaff-Reinet. “For the first time in many, many months, I am seeing the cows jumping around again. “It has healed their hearts.”

He said they were anxiously waiting to see how the veld will respond. “Two of my rain tanks are full and a third is halfway full,” he said. “This was good rain. We were so happy. You would think it was raining lucerne!”

“This drought has taught us to make strong relationships between people, otherwise the future will take us down. It struck everybody and now we are standing together to make sure we will all make it through. It was a good lesson,” said Hanabe.

Had the privilege to tell the heart warming and funny back story of this video shot by Pietie van Rensburg for @dailymaverick. It rained on their farm for the first time since 2016 and the video was shot when they first saw water running into the farm dam. pic.twitter.com/OzZwsivONa

Dave Stern, the chairperson of the Sneeuberg Agricultural Association, said he received 49mm of rain on one of his farms and 18mm on another. “We are so grateful for the rain. It definitely brought some hope. In a few weeks, we will see what a difference it made,” he said.

Pietie van Rensburg, who shot a video of her husband, Gertjie splashing and swimming in the water on their farm near Aberdeen has told of their heartbreak, despair and immense gratitude as they received rain for the first time in four years.

The video showing the overwhelming happiness of a couple as 20mm of rain fell has gone viral this week, but Van Rensburg said she really just meant for it to say thank you to Droogtehulp with Burre Burger, a non-profit organisation that has been carrying them through the devastating drought.

They have had to feed their animals for the past three years as there is nothing left for them to eat in the veld. “I was very worried,” she said. “The windmill was giving in and I didn’t know how we were going to get water for our animals. We only have a third of our herds left. We farm with angora goats and merino sheep.

“On Tuesday, I look at the weather house and wragtag Hansie was outside. But the sun was shining. I pushed him back in. ‘Get in,’ I said to him. ‘Does it look to you like it is going to rain?’

“The next morning again I look and Hansie is outside again. I said to him: ‘Back to the darkness with you. Don’t come here with your lies.’ Now I must tell you that often in the past four years we would hear the thunder and see the clouds, but we never had any rain.

“On Wednesday, my sister phoned to say it was raining. Late afternoon, my husband came to the house to say there is rain coming. ‘Bullshit’ I told him. I don’t swear much, but the past four years have been tough. We have nothing left. We have no money. We can survive on coffee and bread, but my animals, my animals… I can’t bear to watch them starve. There is nothing left for them in the veld. We bring the lambs home to feed them here because they starve in the veld.

“My husband, Gertjie, said let’s take a drive. We have been married for 37 years. I am fat and he is thin. We drove to the dam. There was only dust. I was so disappointed. Then my neighbour phoned. He said there is big water coming your way and then we saw it.

“I think at that moment we lost our minds a little,” she said. “Gertjie is very short-sighted. He has a very expensive pair of glasses. He walked into that stream of water and he knelt down and took his hat off to say thank you. Shoes and all, I tell you. All I thought was God, please don’t let him lose those expensive glasses and don’t let him drown because you know I can’t swim. I never thought we would laugh like that again.

“Dankie Vader, daar gaan hy dam toe! [Thank you Father, there it goes to the dam!],” said Pietie on the video as water streamed into their farm dam. She said the dam wasn’t full yet, but they are very relieved to have some water.

“I looked at the video again and I think we sound a bit drunk, but we just lost our minds a bit. I wanted to sing a song, but I got so deurmekaar [confused], I made up my own one. We were at rock-bottom, but now our hearts are light again. I never thought we would get famous. We were just two old fools from Aberdeen in the rain,” she said.

Amathole District Municipality spokesperson Noni Madikizela-Vuso, said despite the rain there was no significant flow into the Adelaide dam that remains empty at 0%.

But despite the potable water crisis in town, Adelaide shopkeeper Mohammed Gangat said you could feel the mood lift as the rains came down. “I popped into the ko-operasie (co-operative), this morning to buy something and the farmers are only talking about the rain and nothing else. Each one of them can tell you exactly how much it rained on their farm. It is nice to see them have a bit of hope,” he said. “I really hope for the farmers’ sake that a bit of the veld will grow for the animals,” he said.

Adele van der Meulen from the farm Nieuwelings, near Adelaide, said they received 24mm of rain on one day and 10mm the next. “It brought some relief to the farms, but it doesn’t rain fodder or money. The grass started growing, but it is 92% water, if we get some good follow-up rain we will have something for the animals to eat because the veld will have time to recover before winter. Our hearts are full of joy over the rain because everything just feels and looks better,” she said. “But we are still in dire need of fodder. We will keep on hoping and praying. It is very tough, but we believe that God is in charge,” she said.

Cecilia Auld from Bedford said they had between 48mm and 70mm of rain. “For the first time, we saw water in the river. The little dams are filling up. My son just came back from the farm and he said there are animals everywhere. We are expecting some more rain,” she said. Despite the good rain, the potable water-rationing in Bedford is continuing. “Our boreholes are drying up. Only the one at the school is still working,” she said. “We only have water every other day.”

In Steytlerville, parts of the Sunday’s River started flowing again. Farmer Ernie Deysel who farms on Schuinspad said he received about 18mm of rain. “But we need some follow-up rain,” he added.

Nerina Hayward from the farm Rietfontein said there are smiles all around on the farm after they received 21mm.

“It feels like holiday here. We have stopped carting water for now. We are celebrating. We have lucern fields and our borehole water was almost finished. Now we have water again. It feels like a great weight has been taken from my shoulders. It was not easy to keep my husband and my son positive. Now at least, they are smiling again. We are still waiting for the big rain so the veld can really grow and I know the drought has not been broken, but the change in my family is amazing. My heart is full of hope,” she said. MC

Fighting dual infections of Covid-19 and corruption (Part One)

How the rural healthcare workers are preparing for the pandemic