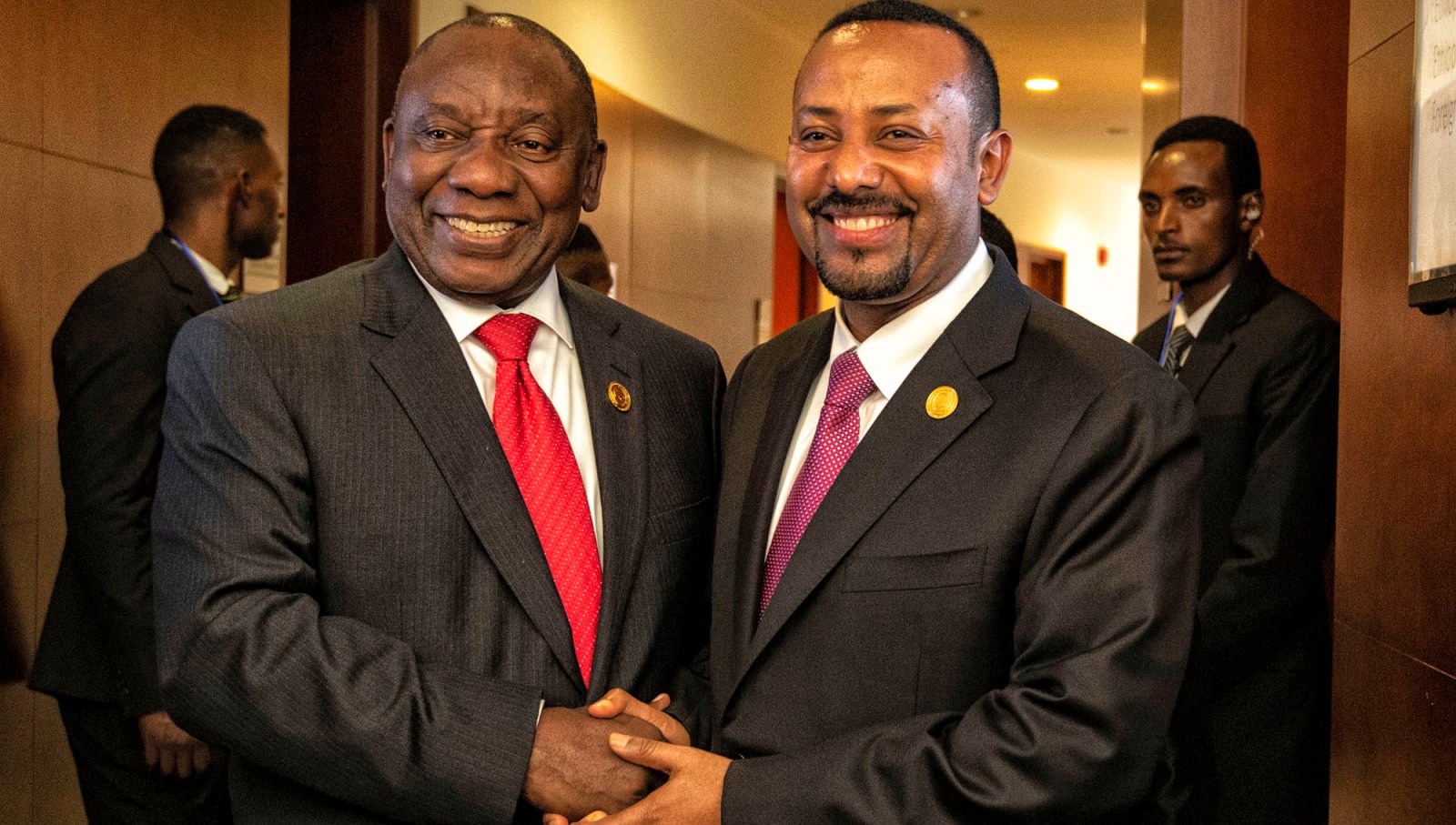 President Cyril Ramaphosa has agreed to a request from visiting Ethiopian Prime Minister Abiy Ahmed to try to help resolve the dangerous dispute among Ethiopia, Sudan and Egypt over the Great Ethiopian Renaissance Dam (GERD) which Ethiopia is building on the Nile. Egypt and Sudan fear the huge dam on the Blue Nile, one of the two main tributaries of the Nile River, will divert much of the supply of Nile water on which Egypt especially is almost totally dependent.

Ramaphosa also made it clear in his response that his government was ready to engage in mediation to try to resolve this or any conflict on the continent.

Abiy on Sunday urged Ramaphosa to take up the issue when the South African president assumes the chair of the African Union in Addis Ababa in February 2020. Abiy has been in South Africa for the first official visit to the country by an Ethiopian prime minister at least since the dawn of democracy in South Africa in 1994.

Ethiopia, Egypt and Sudan have been conducting negotiations on GERD through the mediation of the United States government, but so far they have failed to reach agreement on critical issues, particularly the rate at which the dam, which is near completion, should be filled.

Abiy said at a meeting with Ramaphosa at the Union Buildings on Sunday that Ethiopia was committed to reaching an agreement with Egypt and Sudan on the equitable use of the Nile waters. He hoped Ramaphosa would achieve an “ultimate” agreement on the problem during the year he chaired the AU.

At a press conference after their meeting Abiy elaborated on his request, saying Ramaphosa was a good friend to both Egypt and Ethiopia and also as incoming AU chair he could arrange between both parties to solve the issue peacefully.

“I’m sure he will play a significant role in achieving a win-win solution.”

Ramaphosa said it was pleasing that both Ethiopia and Egypt were willing to discuss this matter and find solutions.

“I had a brief discussion with [Egyptian] President [Abdel Fattah] El Sisi and he was willing to talk to Ethiopia and the same has now been pronounced by Prime Minister Abiy. And I believe a solution is possible because the two countries are great countries and the Nile river is important to both countries.

“And there must be a way in which their interests can be addressed and a solution can be found. We are willing to play a role in facilitating whatever agreement that can be crafted to find solutions to conflicts on our continent.”

This last remark suggests his promise to try to help resolve the Nile dam dispute is part of a broader commitment to tackling conflicts in Africa and beyond.

This may be grounded in the AU’s choice of “Silencing the Guns” as its theme for 2020. As Ramaphosa pointed out, the original aim of this initiative was to silence the guns by 2020 but the deadline has been quietly dropped as it has become unrealistic.

Nevertheless, Ramaphosa also weighed in on the civil war in Libya, saying that the recent ceasefire there had created an opportunity to find an African solution to this African problem.

“The peace that is pursued in Libya must be grounded on African soil. It must be pursued and led by the African Union. This is precisely what we are going to advocate not only to the conflict in Libya, but also conflicts raging elsewhere on the continent.”

International Relations and Co-operation Minister Naledi Pandor told Daily Maverick after the press conference that South Africa was ready to play the role of interlocutor wherever it felt it could help to mitigate conflict. She noted in this context how Ramaphosa had called Iranian President Hassan Rouhani to urge restraint — by both sides — in the conflict with the US over its assassination of Iranian military commander Qasem Soleimani. Iran responded by firing a barrage of missiles at military bases in Iraq where US troops are stationed.

Sources said that Ramaphosa is also trying to set up a call with US President Donald Trump to convey the same message.

At the press conference on Sunday Ramaphosa reassured Ethiopians in South Africa that the country would protect them against xenophobic attacks. He was asked by an Ethiopian journalist what Pretoria was planning to do to protect Ethiopians who had been among the foreigners, mainly African, who had suffered in upsurges of xenophobic violence in 2019.

Ramaphosa said his government was very clear that all in South Africa were welcome and should never be subject to any kind of xenophobic attack.

“We seek to protect all people who live in our country. Not only South Africans, but everyone, wherever they come from. That is the stated approach and policy of our government.”

Pretoria had also instituted a fact-finding mission to uncover the root causes of the xenophobic violence to ensure it did not recur.

Abiy had earlier said that just as former President Nelson Mandela had made Ethiopia his home in 1962 — when he was undergoing military training during the ANC’s armed struggle — many more Ethiopians had made South Africa their home.

“They contribute to the country professionally and by engaging in business. They have made contributions in various sectors and have given birth to children in South Africa. Indeed, they too comprise the Rainbow Nation.”

However, a tougher approach was evident in the joint communique issued after the meeting on Sunday, which said the two governments agreed that they needed to co-operate on migration and added:

“The two leaders agreed on the need for both countries to work together to address illegal migration, human trafficking and smuggling.”

Abiy disclosed that he had lived in South Africa while he studied in Pretoria when he was a soldier. He invited South Africa to invest in Ethiopia and make it their home as well. He said his government was committed to creating a business and investment environment which would benefit South Africans.

He said he and Ramaphosa had also discussed how to increase trade volumes between the two countries, particularly through the continent-wide African Continental Free Trade Agreement which is due to become operational in July 2020. Ministers of the two governments signed agreements to waive visas for their diplomats and government officials and to co-operate in boosting tourism and health. They also agreed to reactivate the Joint Ministerial Commission between the two countries which is now due to hold its next meeting in Addis Ababa in 2020.

Abiy was later enthusiastically greeted at the Wanderers Stadium in Johannesburg by several thousand cheering and flag-waving compatriots living in South Africa. He delivered a message evidently crafted to address the domestic political situation in Ethiopia and drum up support for the elections which are due to be held in 2020, probably in May or June.

He told his people they should put aside their tribal differences and think of themselves as Ethiopian. The message was pertinent as the political freedoms which Abiy has introduced since coming to office in April 2018 have also unbottled tribal and regional tensions, hostilities and often violence among Ethiopia’s many ethnic groups. DM