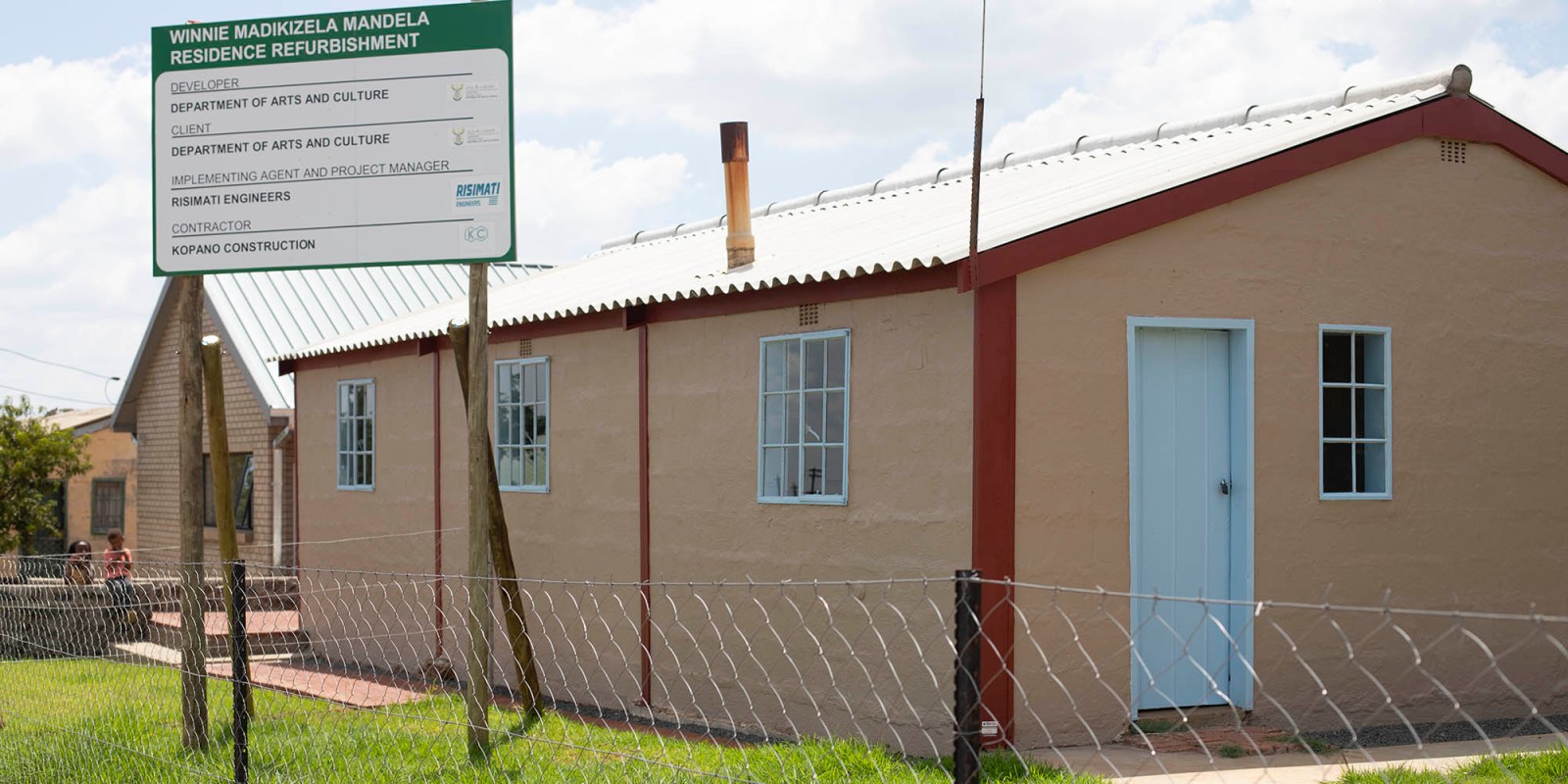 The newly refurbished house of late struggle icon Winnie Madikizela-Mandela in Brandfort, Free State during a visit on Sunday 12 January. The refurbishment of the house, which is meant to be turned into a heritage site, began in 2005 — 16 years later it remains unfinished. (Photo: Ayanda Mthethwa)

For the past 15 years, the ANC government has been promising that the house to which Winnie Madikizela-Mandela was banished in the Free State will become a heritage site. In December 2019, the Department of Sports, Arts and Culture Nathi Mthetwa announced that the museum was complete — but in reality, it is nowhere near opening its doors to visitors.

The ANC’s 108th birthday celebrations have been a time for the party to commemorate its history and the freedom fighters it claims as its own. One of the week-long series of events saw President Cyril Ramaphosa lay a wreath at the Kimberley gravesite of the ANC’s first secretary-general, Sol Plaatje.

But just 90 minutes’ drive away, the site which the Department of Arts and Culture has hailed as one of South Africa’s “prized national assets” received no such acknowledgement. This is 902 Mothupi Street in Majwamasweu Township, Brandfort: the address to which Winnie Madikizela-Mandela was banished by the apartheid government for almost a decade in 1977.

“The Department of Sports, Arts and Culture is pleased to report that the construction of the Winnie Madikizela-Mandela Brandfort House Museum is now complete,” announced a statement on 8 December 2019.

“24-hour security services have been appointed by Letjweleputswa District Municipality to guard this prized national asset and are currently on site.”

When Daily Maverick visited the house on Sunday 12 January, a security guard was indeed on site — but what she was guarding was not quite clear. The sign outside the house still identified it as the “Winnie Madikizela Mandela Residence Refurbishment” — a label which captures the project’s status more accurately than the government’s statement.

A log the security guard handed us to sign reflected that the last visitors had been journalists from the Daily Sun, more than a month previously.

The project has been “completed” in the sense that Madikizela-Mandela’s old home has been renovated, with fresh paint, floors, brickwork, roofing and electrical work. It is this building that will eventually house the museum — but for now, it stands locked, completely empty.

The guard said that she believed authorities were currently collecting Madikizela-Mandela’s old possessions to be housed within it.

According to the government’s December statement, “the DSAC is in the process of procuring expertise to collect artefacts and curate an exhibition”.

Collecting “artefacts” relating to Madikizela-Mandela’s Brandfort stay is bound to be a fraught project: for many years after her return to Soweto, the house was used as a residence by relatives of Sol Plaatje. Before the current renovation, the building was reportedly used as a base by Brandfort youngsters up to no good.

For more than 15 years, the failure of the government to take meaningful steps to turn the house into a memorial for Madikizela-Mandela has been a source of anger and sadness for her supporters. Claims of fraud and corruption have surrounded the project, which has stagnated in a province under the control of Ace Magashule for almost a decade of that period.

Documents for the renovation seen by Independent Media show that the department set aside R4-million for the museum. Included in the plans were a “multi-purpose centre with Wi-Fi facilities”, toilets and parking for visitors.

The “multi-purpose centre” currently takes the form of a large room, also empty. The promised toilets have materialised — in one, the delivery box for the toilet seat was still stashed against a wall — but there is no sign of visitor parking.

There are few places which could benefit more from a tourist attraction than Majwamasweu Township. Evidence of poverty is acute; roads barely exist; the rubbish strewn everywhere points to an environment where sanitation services do not operate.

It is not hard to imagine the economic boost that a proper heritage site here could bring to residents — but as it stands, that dream looks very distant. Locals told Daily Maverick they had heard the museum might open in March.

“What are you going to write about?” one asked curiously as we left. “That the people of Brandfort are so poor?” She was still laughing with her friends as we drove off. DM