Finance Minister Tito Mboweni has lit up Twitter again, this time with a pledge to push for cannabis legalisation. Finally, someone in government is cutting through the fog of ANC policy by getting straight to the point.

Finance Minister Tito Mboweni tweeted on Thursday 9 January that he was going to propose cannabis legalisation at a Cabinet lekgotla later this month. Advocates of such a policy now have a powerful ally in their quest to finally get this one rolling.

Mboweni has said before that cannabis policy needed change, but this time he came out with an emphatic pledge to push for legalisation. 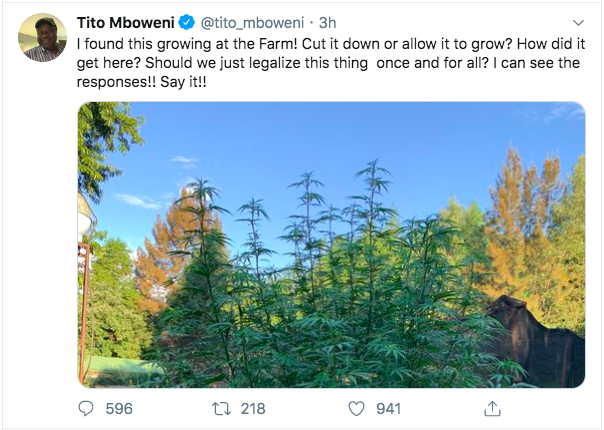 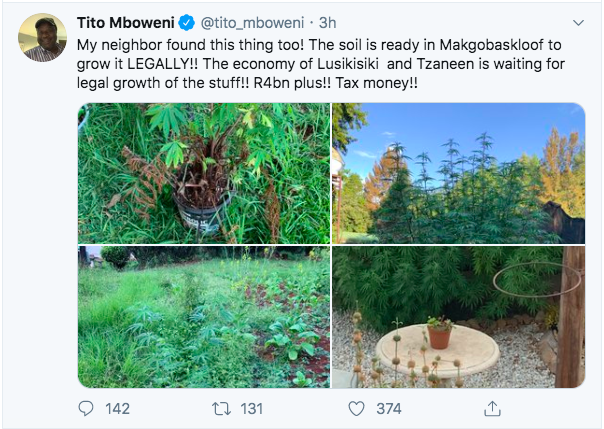 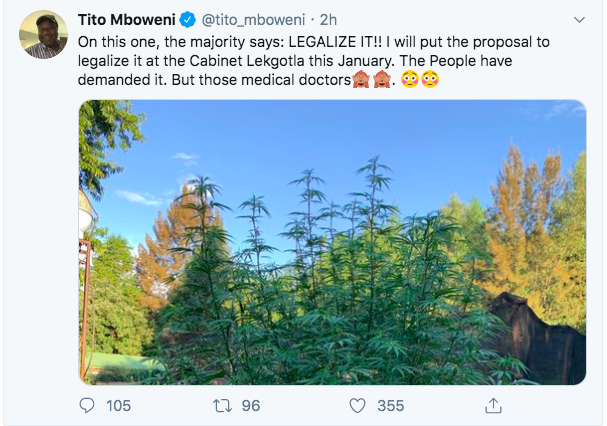 “I found this growing at the Farm!” Mboweni said in a post featuring a picture of cannabis plants. He did not say what farm it was, but he had posted previous pictures from Tzaneen where he grew up and has a farm.

“Cut it down or allow it to grow? How did it get here? Should we just legalize this thing once and for all? I can see the responses!! Say it!!”

After about 400 responses came in, the minister tweeted to his more than 480,000 followers:

“On this one, the majority says: LEGALIZE IT!! I will put the proposal to legalize it at the Cabinet Lekgotla this January. The People have demanded it.”

He also had a post where he cut to the heart of the matter: tax revenue.

“My neighbour found this thing too! The soil is ready in Makgobaskloof to grow it LEGALLY!! The economy of Lusikisiki and Tzaneen is waiting for legal growth of the stuff!! R4bn plus!! Tax money!!”

One response encouraged the minister to smoke some himself:

The fact is that new policy needs to be crafted in the wake of the 2018 Constitutional Court ruling that current prohibitions were unconstitutional and invalid. There has been a lot of talk since, but not much in the way of concrete action — a recurring theme of the Ramaphosa administration.

Only Canada and Uruguay have legalised cannabis thus far for recreational use, with mixed results. Companies have not reaped the profits initially anticipated in the Canadian case, but it is early days yet and the move has been widely lauded as sensible social policy.

And then there is the potential for tax revenue. Mboweni does not have a lot of fiscal space left in the face of looming rating downgrades and an economy that is barely growing at best and probably contracting as Eskom battles to keep the lights on.

Raising taxes on booze and smokes — “sin taxes” as they are known — has long been a staple in the February Budget speeches delivered by South African finance ministers. Mboweni clearly sees a tempting third category here. Later in January, the Cabinet will have that to put in its collective pipe. Cannabis advocates hope it will smoke it. BM