REVEALED: One in 10 soldiers in the British Army is a foreign national, amid concerns over racism and mercenaries 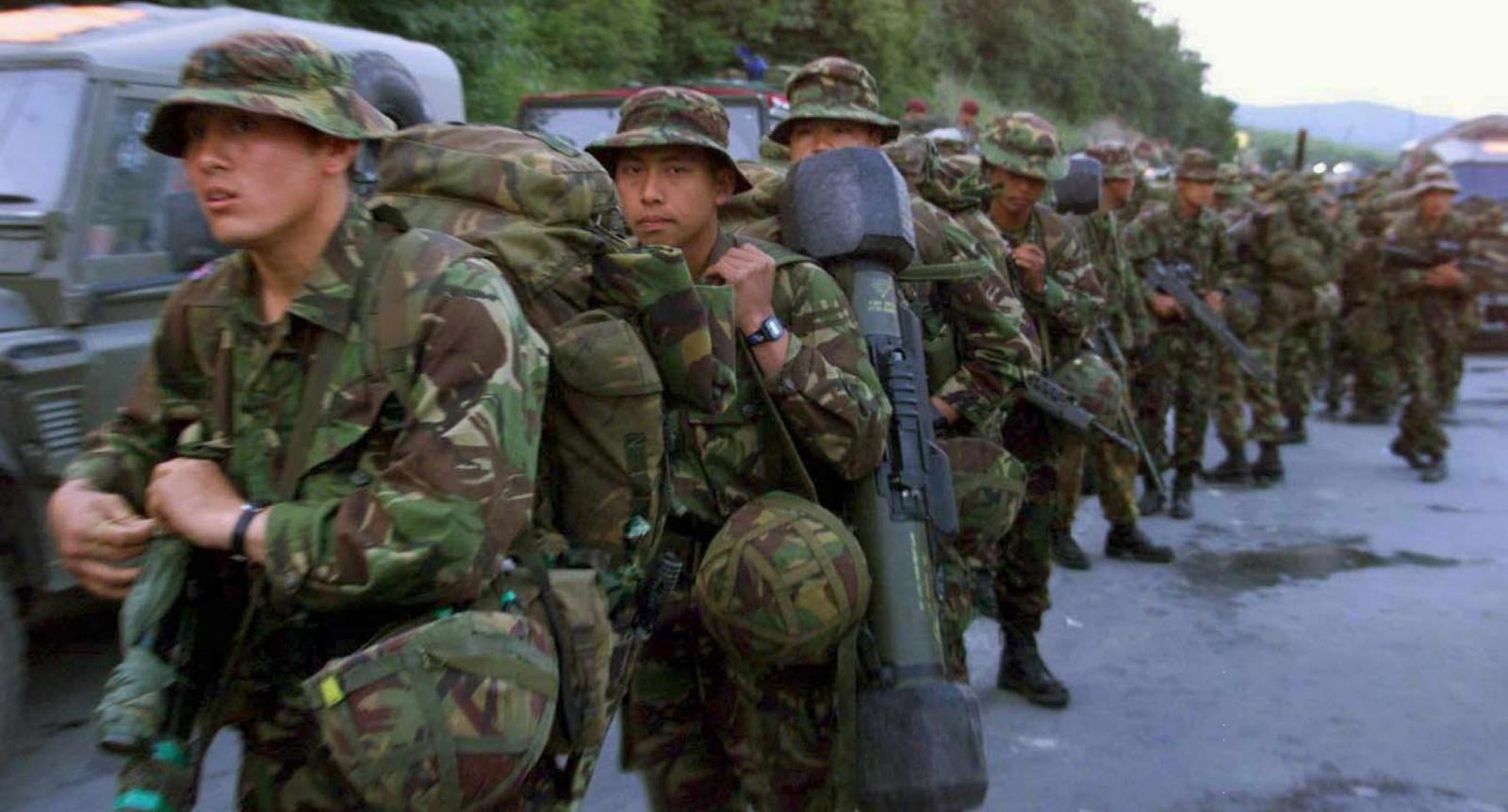 Ten percent of full-time professional soldiers in the British army are not UK nationals, including at least 1,350 African troops, new analysis has found.

The revelation that one in 10 professional soldiers in the British Army is a foreign national comes after the Ministry of Defence (MOD) relaxed its rules on the number of people from former colonies who can join the British army, amid a long-term recruitment crisis following the controversial occupations of Iraq and Afghanistan.

The new recruitment policy risks exposing foreign soldiers, who are predominately not white, to what some have claimed is a “racist institution”. It also raises the prospect that the army will continue to be criticised by some for employing “mercenaries”, especially since the UK has long refused to sign a UN convention outlawing the practice.

Six months after the MOD announced a new drive in 2018 to recruit Commonwealth soldiers, there were 82,460 full-time soldiers serving in the British army, of which we have found 8,350‬ were non-UK nationals drawn from 43 foreign countries.

The figure does not include part-time soldiers serving as reservists or the provost guard. The data is contained in statistics published online by the MOD and disclosures from information requests filed by Declassified UK.

The new analysis shows that there are 4,270 Nepali, 1,335 Fijian and 415 Ghanaian soldiers serving in the British army, making them the top three foreign nationalities.

The number of Fijians is expected to rise to 2,000. The army also counts among its members 390 people from the Republic of Ireland and 280 South Africans.

The tiny Caribbean nation of Saint Vincent and the Grenadines, which had a population of just 109,188 at its last census in 2012, also contributes 245 soldiers to the UK army. This means that someone from St Vincent is statistically almost twice as likely as a British national to work as a soldier in the UK army.

Professor Benjamin Zephaniah, the renowned poet and writer, told Declassified: “We’ve been here before. Other British institutions have found that in times of need they have had to look abroad for people to make up the numbers, with various degrees of success, and sometimes, various degrees of racism. The thing with this is that it really is a matter of life and death.”

“The racial aspects of these findings are clear, but what is just as disturbing is that the majority of these recruits (I call them mercenaries) are coming from developing countries. It’s basically another form of exploitation.”

He added: “The world has enough armies. What we should be doing is breaking down borders and recruiting, (and training), more doctors, nurses, teachers, and environmental scientists.”

In November 2018, the MOD announced it would recruit an extra 1,000 soldiers each year from Commonwealth countries, and waived a previous requirement that recruits must live in the UK for five years before being eligible to apply.

This was followed in February 2019 by a move to recruit significantly more Gurkha soldiers from Nepal, which is not a member of the Commonwealth. The annual intake of Gurkhas rose 25% from 320 to 400 men.

By April 2019, there were 3,430 Nepali citizens serving in the British Army’s Brigade of Gurkhas. However, the MOD told Declassified that these men are not permitted to become UK nationals while in service. The new research has also found that a further 840 Nepalis serve in other parts of the British army, bringing their total to 4,270.

The vast majority of foreign soldiers serving in the British army are not white. Close to 85% of foreign troops are people of colour compared to just 6% of serving UK nationals. Several recent cases have come to light of foreign soldiers facing racism from their British colleagues.

In 2019, two former members of Britain’s elite parachute regiment, Nkululeko Zulu from South Africa and Hani Gue from Uganda, took the army to an employment tribunal alleging they had suffered from racial discrimination. A judge ruled they had been victims of racist graffiti written in their barracks at Colchester, in southeast England, in January 2018.

The tribunal found swastikas, Hitler moustaches and the word “n****r” on photos of the men. However, the judge ruled that other allegations brought by the claimants, which dated from 2014, were “out of time” and therefore inadmissible. These included claims that white British soldiers had displayed Confederate flags (a symbol of white power in the US) and described Kenyan troops as “African animals” while on a training exercise in their country.

A similar case involves Inoke Momonakaya, a Fijian man who fought for the British army in Iraq and Afghanistan, which was recently highlighted by journalist Joe Glenton. Momonakaya told Glenton he initially felt it was an “honour” to become part of the British Army and was shocked when he was called a “black bastard” by his instructors.

Momonakaya was also forced to dress as a Taliban fighter in a training video in which all those portraying British soldiers were white while all the insurgents were black. The MOD was later forced to pay him £490,000 in compensation and has since set up a new Service Complaints Ombudsman, who recently told the BBC that “racism is prevalent” within the armed forces and occurs with “increasing and depressing frequency”.

An MOD spokesperson told Declassified: “Racism has no place in the military and anyone found to be behaving in such a way can expect to be disciplined, discharged or dismissed. We are committed to stamping it out and have a range of measures to ensure that this issue is tackled.

“This includes creating a new team to deal more quickly and effectively with complaints by service personnel of racism, shifting the culture of the armed forces so that everyone feels included, with even more emphasis on stronger leadership action and improved education and training.”

Despite the steps the MOD says it is taking to tackle racism, there is also the prospect that foreign soldiers fighting for the UK will be regarded by some as mercenaries. The Oxford English Dictionary defines a mercenary as “a hired soldier in foreign service”.

Although the UN’s convention on mercenaries excludes a combatant who is “a member of the Armed Forces of a party to the conflict” – which would appear to apply to the foreign soldiers in the British army – the UK has refused to sign the treaty ever since it was passed in 1989.

Declassified British files show that when Harold Wilson’s Labour government considered a possible domestic ban on mercenaries in 1976, civil servants were concerned that prohibition could jeopardise the British Army’s recruitment of Gurkhas. The Gurkhas were particularly susceptible to being regarded as mercenaries given their initial service with Britain’s East India Company — a mercenary organisation that conquered India — in the 19th century.

Concerns continued when Margaret Thatcher’s Conservative government took power in 1979, with her ministers deciding that “the difficulties of carrying and then administering [anti-mercenary] legislation were greater than the benefits which might result”.

Any plans to ban mercenaries were “therefore put on ice for two years” and Whitehall officials anticipated that domestic efforts “may now be overtaken by UN activity”. By the 1980s, the UN was seriously attempting to implement international restrictions on mercenaries. Britain took part in those deliberations but remained sceptical about the merits of a ban.

One official familiar with the sessions at the UN noted that the UK “has not on any occasion taken the line that all mercenary activity, whatever the circumstances, is to be condemned”. The official added: “The UK’s participation in the UN committee indicates, however, that in our view their activities cause problems in international relations and that it is worthwhile to search for a possible internationally agreed solution.”

More than a quarter of a century later, the debate over the Gurkhas’ status continues. In 2016, an editorial in one of Nepal’s main newspapers, Kantipur, argued that “the UK has been using Gurkha soldiers as mercenaries for decades”. The editors noted Britain’s deployment of Gurkhas to Brunei, commenting: “The Sultan of Brunei has used soldiers of the British Royal Gurkha Rifles as palace guards since the 1960s.” One of the British Army’s two Gurkha battalions is permanently stationed in Brunei, which is an absolute monarchy.

However, the Gurkha Brigade Association, which represents current and retired members, insists: “The term ‘mercenary’ is not a valid description.” The association also claims that the term is “resented by the Government of Nepal”, which is currently run by Nepal’s Communist Party.

The UK is not alone in recruiting foreign soldiers. France has perhaps the world’s best-known foreign soldiers contingent, the French Foreign Legion, which may have as many as 9,000 members, while Denmark allows non-Danes to serve in its armed forces. DM

Phil Miller is a staff reporter for Declassified UK and tweets from @pmillerinfo. His book, Keenie Meenie: The British Mercenaries Who Got Away With War Crimes, is published by Pluto Press.