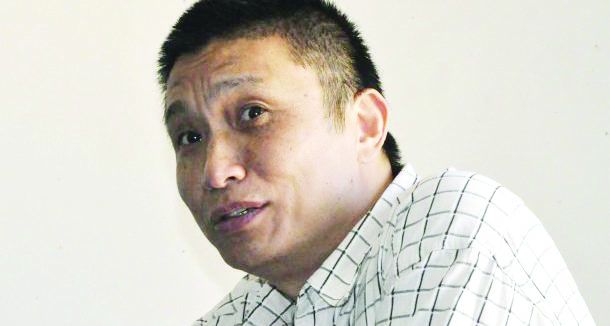 A triangular battle over election campaign T-shirts worth more than R1-million involving controversial Lesotho businessman Yan ‘John’ Xie, Lesotho’s Alliance of Democrats (AD), and a Durban clothing company has landed up in the Lesotho High Court.

The MNN Centre for Investigative Journalism has been told that businessman Yan “John” Xie agreed to pay for 50,000 T-shirts used by Lesotho’s Alliance of Democrats (AD) party in the country’s 2017 election campaign, and then backed out of the agreement.

Xie was asked whether he agreed to pay for the T-shirts and about his links with the AD. He did not answer the questions, saying he was ill in hospital and should be left alone until he had recovered.

The AD is the second-largest party in Lesotho’s coalition government led by Thomas Thabane. It controls a number of key ministries, including those of education, energy, public service, home affairs and correctional services.

Moleleki also did not answer questions about Xie’s relationship with the party – including why a private entrepreneur would commit to paying its debts.

Despite numerous attempts by the MNN Centre for Investigative Journalism to obtain his comment, he did not answer his phone. He also failed to answer questions sent via WhatsApp.

However, MNN has heard WhatsApp and voice messages from both Moleleki and Xie in which they appear to acknowledge the debt.

The supplier of the shirts, Ekhaya Promotions KZN Workwear Company, lodged a High Court application in June this year for the recovery of M1.7 million it claims the AD owes it for 50 000 campaign T-shirts.

In its response, the party denies ever reaching an agreement with Ekhaya to supply the shirts.

This is not the first time Xie has been embroiled in controversy over his ties with the AD. In 2016 a company he co-owns with former AD youth league executive member Lekhotla Matšaba controversially landed an M3.6-million tender for the supply of police uniforms.

According to the Lesotho companies register, the company, Cubana Shell, was incorporated a month later. During this time, current AD leader Moleleki was Minister of Police.

Xie, a naturalised Chinese businessman who has boasted of sponsoring “almost every politician” in Lesotho, has landed lucrative government tenders from various state entities in Lesotho, including currently AD-controlled government ministries.

Representatives of one of the companies, Legends Construction, told the committee that Xie offered to fund the companies on condition that he was given a controlling stake in each of them and access to their bank accounts to protect his investments.

They said that before they had completed the work, they received a total of M26-million from home affairs. This was immediately transferred into the account of Xie’s company, Teboho Construction.

Xie could not be reached for comment on this allegation. However, in an interview with amaBhungane in 2018, he revealed that he had lent money to 70 local companies doing government work.

He dismissed allegations that he had captured the Lesotho state, saying “this is not even my intention”.

“I look at people’s faces. I do business with anyone as long as they have a business vision,“ he was quoted as saying. “They could be a politician; I don’t mind. I help a lot of Basotho become business-minded.”

Meraka Abattoir is Lesotho’s only such facility. Following the government’s heavily criticised decision in March 2018 to ban red meat imports, it has enjoyed an effective monopoly on the sale of this essential commodity.

Xie moved out of Meraka Lesotho in August 2017 – the month that he was appointed Head of Special Projects and the Prime Minister’s Special Envoy and Trade Adviser on China-Asia Trade Network.

Inspection of Lesotho’s companies register shows that he transferred his 690 shares in Meraka to Xiaoyi Yao, who is understood to be his wife.

Meraka managing director Mosito Khethisa was quoted in the Lesotho media as denying any relationship between Xie and the abattoir. But he conceded that “there are some Chinese nationals who are shareholders and I don’t know their relations with him”.

Xie has been embroiled in other controversies related to government tenders.

During the 2012/13 financial year, Auditor General Lucy Liphafa revealed that M6.3-million budgeted for the renovation of the Central, Leribe and Thaba-Tseka correctional institutions, was paid to Chinese-owned companies for work they did not do.

Liphafa noted the “issuance of all certificates for payments was doubtful … the scenario was an indication that the certificates were issued for work not yet done and as such, the government of Lesotho funds had been paid for services not actually rendered”.

Last month Xie was mentioned in the controversy surrounding the M340-million tender for the renovation of Maseru’s Mpilo Boulevard for the Ministry of Local Government.

Tšooana told the PAC that he defied the instruction on the tender award, which has been suspended by Lesotho’s Directorate on Corruption and Economic Offences pending investigation.

A minister who also doubles as a businessman, Phori told Lesotho Times that he bid for this tender in partnership with UNIK and saw nothing wrong in this. Xie’s comment could not be obtained on either of these tender controversies.

Xie is understood to have offered financial assistance to Thabane and members of his party, the All Basotho Convention (ABC), during their time in exile in South Africa in 2015-2017. Minister Phori was also among the ABC exiles.

The AD pledged to fight corruption when it split away from the Democratic Congress in 2016, and Moleleki launched a scathing crusade against former premier Pakalitha Mosisili, promising to unite Basotho in the fight against graft.

The split saw the demise of Mosisili’s coalition government, leading to early polls in 2017.

Ekaya chief executive Rajen Naidoo told MNN that his company supplied the AD with 50,000 T-shirts for its 2017 election campaign, based on an agreement that Xie would settle the debt within two weeks.

Naidoo said Xie had since reneged on the undertaking and has not paid over the past two years. For its part, AD denies having entered into an agreement with Ekaya.

However, MNN has seen delivery notes and WhatsApp messages, and listened to voice notes between Xie, Naidoo and various AD officials, including Moleleki, that paint a different picture.

Moletsane told MNN all questions about Ekaya’s claims were sub judice and he could not respond to them. He insisted Xie never received favours from him in the form of tenders. “As a minister, I have no hand in the awarding of tenders,” he said.

Moleko also distanced himself from the T-shirts dispute.

“I wasn’t part of those who decided who to pay, or when to pay, or even privy to how we got the consignment. Some things were purchased while others were donated. Mine was mainly deliveries, storage, or even dispatch to constituencies under supervision of the SG [Moletsane],” Moleko said.

In more than 40 voice messages to Naidoo over the past two years, which MNN has heard, Xie promises to settle the AD debt. But he claimed he was waiting on the government to pay his “construction company” first.

In one of them he is heard to say: “We hire so many Chinese; more than one year we didn’t pay them because government didn’t pay us. So they are making strike now. Every day we push [for payment].”

“Let me tell you, the government employed me in a high position but they don’t even have budget, I don’t get a salary, that’s why I still work in my [private] office.”

In another of the messages, Xie says he is expecting M600,000 from the Ministry of Finance and promises to pay Rajen M400,000, as “I have lots of debts I need to pay back”.

Xie finally refused to pay, telling Naidoo to sue the AD. “I told you to go to court. Have you still not gone to court?” Xie is heard to say.

Xie who claimed to be sick and bedridden in hospital when he was contacted, did not disown his WhatsApp messages. Instead, he begged to be left alone, claiming he was sick.

However, he said the government payments he had promised Naidoo were for work done for the previous administration. “The reason I answered you the last question is because I don’t want you to make a mistake; I don’t have any projects with this current government,” he told MNN.

Naidoo claimed that Xie “got greedy with the tenders and wanted more, but things could not fall his way – that’s why he pulled the plug on AD”.

“I was told by one of AD ministers that Xie was paid but he refused to pay us. He even promised to buy plain T-shirts to replace ours, but we needed our money,” he said.

Explaining how the order was placed, Naidoo said that because Ekaya had previously supplied T-shirts to AD councillors, the company was contacted by “Nice” [Mohapi Nice Khofu] a close associate of Moleleki.

He said the order was placed by Khofu working with Moleleki, who connected Ekaya with Xie as the AD’s “sponsor”.

Moleleki did not answer his phone and ignored questions sent via WhatsApp.

In one of the messages, Naidoo says to Moleleki: “Sir, please help us – we are still battling with payment from John. Can you assist him from the government perspective? He is awaiting funds to come in.”

“OK Rajen! I hear you! I shall call you later today,” Moleleki is heard to reply.

Based on this conversation, MNN asked Moletsane if Xie received favours from him because he took care of AD debts. He responded that the matter was sub judice.

In an interview, Khofu denied connecting Ekaya with Moleleki but confirmed messages between him and Naidoo in which he promised to talk to Moleleki about the Ekaya payment.

“I have nothing to do with those T-shirts. I referred him to the leader who promised to talk to him,” he said

Khofu said someone had promised to pay Naidoo on the AD’s behalf. Asked to name this individual, he hung up.

In 2017 Khofu and Moleleki were acquitted in the Lesotho High court on charges related to the fraudulent issuing of mining licences.

Ekaya’s lawyer, Lesotho-based Mokone Sello, said that Ekaya had been sent from “pillar to post” when it demanded M1.25-million for the T-shirts, plus M462,500 in accumulated interest.

In response, the AD says it “never entered into the alleged agreement in terms of which it could be liable for payment of the alleged purchase price.”

Sello is understood to be negotiating with the AD to settle the matter out of court. DM

Sechaba Mokhethi works for Lesotho’s MNN Centre for Investigative Journalism. He is doing an internship in South Africa sponsored by IJ Hub.