Inertia/Stasis: A brutal reality of SA’s political calendar and the waiting game that has already begun 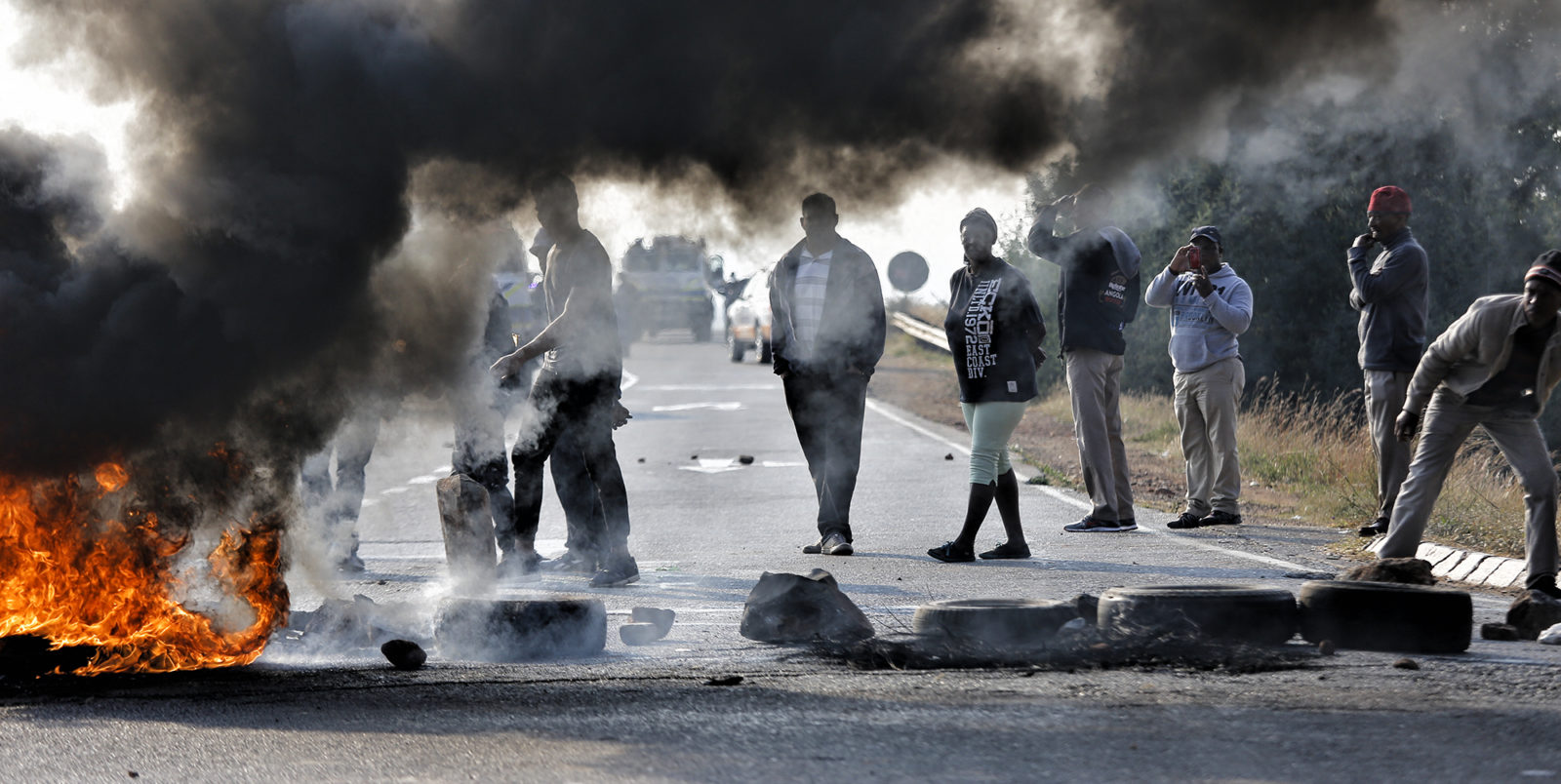 Protestors stand by burning barricades during a violent service delivery protest in Ennerdale, Johannesburg, South Africa, 09 May 2017. The local community took to the streets blocking major roads in a second day of demonstrations as they protested a lack of housing and land for their community. Continued protests have become a weekly occurrence as many poorer communities show opposition to the African National Congress (ANC) and South African President Jacob Zuma, claiming a continued lack of service delivery since the end of Apartheid. EPA/KIM LUDBROOK

It is time for the inertia and stasis that enters public policy making every year and, as flagged by Chapter 13 of the National Development Plan (NDP), makes public servants and public administration beholden to the vicissitudes of the ruling alliance – especially the political calendar.

The National Development Plan 2030 dedicated an entire chapter to Building a Capable and Developmental State. Chapter 13 of the NDP makes specific recommendations to “insulate” the public service from “undue political interference”. A cornerstone objective of the public service is to become “a well-run and effectively co-ordinated [set of] state institutions with skilled public servants who are committed to the public good and capable consistently high quality services”.

One of biggest problems identified in the diagnostic report on the NDP is “tensions in the political-administrative interface”. Herein, lies what is probably the biggest problem of governance in South Africa. It is important to state, here, that there are very many professional people in the public service, as many, probably, as are those who get by doing as little as possible. It’s not fair to taint every public servant with the same brush. Nevertheless, the elision between state and the ruling alliance – a “broad church” with split loyalties an example of which will be shared below – introduced tension into the public service.

There are three immediate issues of concern that, if addressed effectively, governance may well become a well-run and effectively co-ordinated [set of] state institutions with skilled public servants committed to the public good. The first is the way the original National Planning Commission (NPC), under the astute leadership of Trevor Manuel, Cyril Ramaphosa (now President Ramaphosa), the impeccable brilliance of Kuben Naidoo (now deputy governor of the Reserve Bank), the considered genius of Khathutshelo Netshitenzhe (now head of the Mapungubwe Institute for Strategic Thought), and a group of courageous thinkers and scholars, has been dissolved into a zombie-like Department of Planning Monitoring and Evaluation (DPME), located somewhere close to the presidency, and notionally under the political oversight of Jackson Mthembu.

Mthembu is a likeable person who seems untainted by the maladministration and corruption of the Zuma years, but his official bio details mainly what he did as an activist. There is little to suggest any senses of innovation, experimentation, courageous leadership and vision. He seems like a nice guy to hang around with, but gives no sense of any understanding of the world in which we live.

The Deputy Minister Thembi Siweya’s profile, is similarly crafted around self-dramatisation, with vacuous encomia about her life as an activist. Siweya is described as “A communicator in her own right [who] has vast experience of working in the communications environment both as a civil servant and as a politician.” Again, nothing about the vision and leadership that is required to take successive iterations of the NDP into a future where the architecture of global capitalism is breaking down, where digitisation and robotics are reshaping how our lives may change in the next several decades, and how (this applies, to Jackson, too), there is an increased swell of precarity in South African society.

A second problem is that the NPC itself has come to resemble iskorokoro. That sounds harsh, but can anyone really explain what is happening in the NPC, or what it has done in the past three years or so? It’s doubtful, at best. From Jackson, to Siweya, DPME and the NPC, there seems to be no sign of any innovation, creativity, vision and daring. That last word, “daring” is important. It bring us to the third problem. A combination of inertia and a type of cowardice, that can be linked, almost directly, to the political alliance that governs, and the divisions within that alliance.

There are two aspects of this third problem that need to be fleshed out. The first is the hold up of “the economy chapter” by leftist forces since the earliest days of the NPC.

(I should disclose here that I worked in the secretariat of the NPC. I usually do not break confidences of relationships I have built over years. From the initial period at the behest of Nelson Mandela before I returned to academia in 1995, to a recent brief spell, I have made minimal contributions to public policy-making. I am not a member of the ruling party. I have always accepted that trust is the most important thing in any relationship. For the most part I can speak only in general terms.)

With that out of the way, and with South Africa in quite rapid decline, it is the honourable thing to say that of all the meetings of the NPC, the Cosatu-affiliated commissioner Chris Malikane failed to attend a single meeting, or make a single contribution to the NDP2030. With Irwin Jim of Numsa, Zwelinzima Vavi, Malikane and Patrick Bond of Wits, and Neil Coleman formerly part of the ruling alliance that gave us mass corruption and state capture, and now self-sanctified as an economic justice warrior, the NDP will go nowhere unless it turns South Africa into a dictatorship of the proletariat – not unlike the early Soviet Union. And we have not factored in Julius Malema’s scorched earth policies. Altogether, they have killed the NDP – and that’s not hyperbole.

The second element of the third problem. The inertia and stasis that enters public policy making every year and, as flagged Chapter 13 of the NDP, makes public servants and public administration beholden to the vicissitudes of the ruling alliance – especially the political calendar. This is more or less how the political calendar works.

Public servants drift back to office sometime between 2 – 6 January, but cannot get to work, because the ANC has a birthday celebration where something big, anything big, may be said. Then, a week or so later, there is probably a Cabinet lekgotla. Still, nothing can be done, because public servants have to wait, in a manner of speaking. After the January lekgotla, all attention is now on the State of the Nation Address, and again we wait for a word. Once that is done, the next wait is for the Budget Speech, by which time there is a season of public holidays from human rights day on 21 March, the Easter Weekend, Freedom Day on 27 April and May Day. There is a flurry of leave and school holidays to get through before the 16 June “statement” on Youth Day. Public servants continue to wait for directives.

By now Parliament is getting ready to rise, the ANC will have a mid-term policy conference or an extended Cabinet lekgotla in early July, and still everyone waits. This all seems like an exaggeration, but if you understand, fully, the elision of the state and the ruling alliance, you may get a sense of what Chapter 13 of the NDP referred to as the need to insulate the public service from political cycles. We’re not done. Not just yet.

From the waiting game to the merry-go-round of Directors General and their deputies’ (re)appointments (redeployments, rather), to the internal factions, Constitutionalists seem to be doing their best to root out corruption and maladministration, but have to contend with noisy, and quite useless freeloaders on the backbenches, and the pro-Zuma faction of obstructionists who are increasingly being romanced by Malema and Irwin Jim to create a leftist force to make the country ungovernable in 2020. They seem bent on taking us back to our own Year Zero where, as in Pol Pot’s Cambodia, everything has to be razed to the ground, and we have to start from scratch.

In the final analysis, there is little chance of any work getting done in 2020. Not unless the NPC springs a surprise on anyone, and produces a new iteration of the NDP2030, or the President is allowed one step forward, before he is forced to take two steps back by his alliance partners in the South African Communist Party, Cosatu, the South African Metalworkers Union, Malema, Coleman, Bond and Malikane – among others.

In the meantime we wait. DM

James Stent for GroundUp • 6 hours ago

Clocks run from left to right due to that being the way sundials cast shadows in the northern hemisphere.