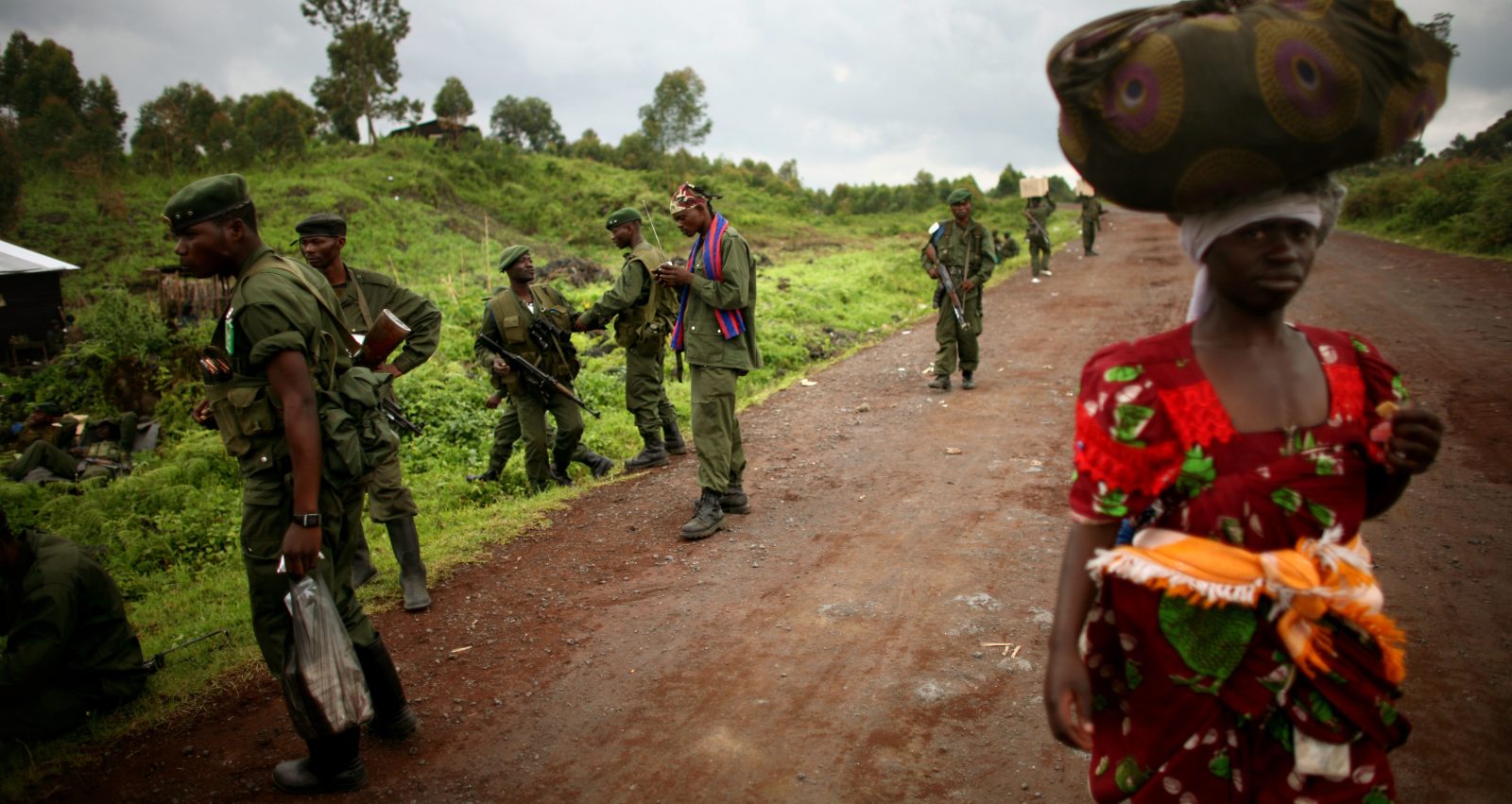 A woman walks past soldiers outside Goma in the Democratic Republic of Congo. Conflict in the east of the country has greatly hampered the response to the outbreak of the Ebola virus. (Photo by Uriel Sinai/Getty Images)

Can African leaders repeat the show of unity achieved on continental free trade to silence the guns?

For the African Union, 2020 is supposed to be a landmark year. Its “silencing the guns” initiative is aimed at “ending all wars, civil conflicts, gender-based violence, violent conflicts and preventing genocide in the continent by 2020”. While no one can argue with that laudable goal, the continental body and its member states will have to work miracles to achieve it by the end of this year – especially when the trend seems to be heading in the other direction.

Patricia Danzi, Regional Director for Africa for the International Committee of the Red Cross (ICRC), recently told journalists in Johannesburg that her organisation – along with other major humanitarian organisations – was struggling to cope with existing situations that strain already limited attention and resources. More concerning still was that new situations keep cropping up.

“Conflicts last and they don’t stop. And more are added,” she said. She used Burkina Faso as an illustrative example: in 2019, 750,000 people were displaced by violence there, forcing ICRC to set up a new emergency response, while maintaining their operations in neighbouring Mali and Niger.

Danzi’s opinion is worth paying attention to. With extensive footprints in conflict zones and disaster areas across the African continent, major humanitarian organisations have long functioned as a kind of canary in the coalmine – so if they are worried, other policymakers should be too. And looking ahead, it is not difficult to see that the pattern she describes – of new conflicts bubbling up alongside existing ones – repeat itself.

The Sahel is a region of particular concern, given the inability of either United Nations peacekeepers, the French military or the regional G5 Sahel security force to contain the conflict. A surge of violence this year in both Burkina Faso and Mali underscored the fragility of the governments in both countries. Nearby, conflict in and around the Lake Chad Basin area has continued. “Violence has dragged on for 10 years,” observed ReliefWeb – while in northern Chad a new conflict is brewing over access to gold reserves.

Further east, South Sudan’s peace deal is hanging by a thread. Repeated delays to the establishment of a government of national unity led the United States to recall its ambassador to Juba in November 2019. Meanwhile, new fighting between ethnic groups in central South Sudan left at least 79 people dead and forced the deployment of United Nations peacekeepers. The prospects of a resolution to this long-running conflict in 2020 look slim.

In Ethiopia, Nobel Peace Prize winner and Prime Minister Abiy Ahmed’s ambitious reform project is facing its greatest threat yet as various political groupings seek to take advantage of the newly-opened political space. This has resulted in widespread communal violence and tensions within the ruling party, with Abiy’s government struggling to get a grip on the situation.

How the prime minister responds this year may well determine the future of Africa’s second-most populous country – and will have an enormous impact on the stability of the Horn of Africa as a whole.

In the centre of the continent, regular flare-ups of violence in the Central African Republic suggest that the peace agreement is not holding firm there, either. And in the Democratic Republic of the Congo, conflict in the east of the country has greatly hampered the response to the outbreak of the Ebola virus.

In the south, Mozambique last year officially concluded a peace deal to end fighting between the ruling party and Renamo, the main opposition group. Despite this, an offshoot of Renamo has continued to wage war against the government. More disturbingly, the insurgency in the northern Cabo Delgado province shows no sign of slowing down – even though the exact identity of the insurgents remains murky. The presence of Russian private contractors is likely to exacerbate the situation.

And in the west, Nigeria’s long fight against Boko Haram has become entrenched. Analysts are keeping a nervous eye on tensions in Guinea, where President Alpha Conde appears to be angling to extend his time in office. In Côte d’Ivoire, elections next year look likely to bring old hostilities to the fore.

Statistics bear out the impression that conflict on the continent is getting worse, not better. The Armed Conflict Location & Event Data Project, which monitors incidents of conflict around the world, found that there had been 21,600 incidents of armed conflict in Africa in 2019 (up to 30 November). For the same period in 2018, that number was just 15,874. That represents a 36% increase.

This is perhaps the greatest challenge facing Africa in 2020. What can African leaders, led by the African Union, do to reverse this trend? Complicating any response is the likely impact of extreme weather events related to climate change. As the ICRC’s Danzi noted: “The climate impact will not be going away. The storms are heavier … These are issues we don’t plan for, but we probably have to.”

That planning needs to start immediately. Far from being silenced, the guns are getting louder. There is a glimmer of hope, however. In working together to sign the African Continental Free Trade Area, African leaders showed they are capable of taking a common position on a major continental challenge. If they can repeat and maintain that show of unity – and do it quickly – the forecast for 2021 might be better than this one. DM