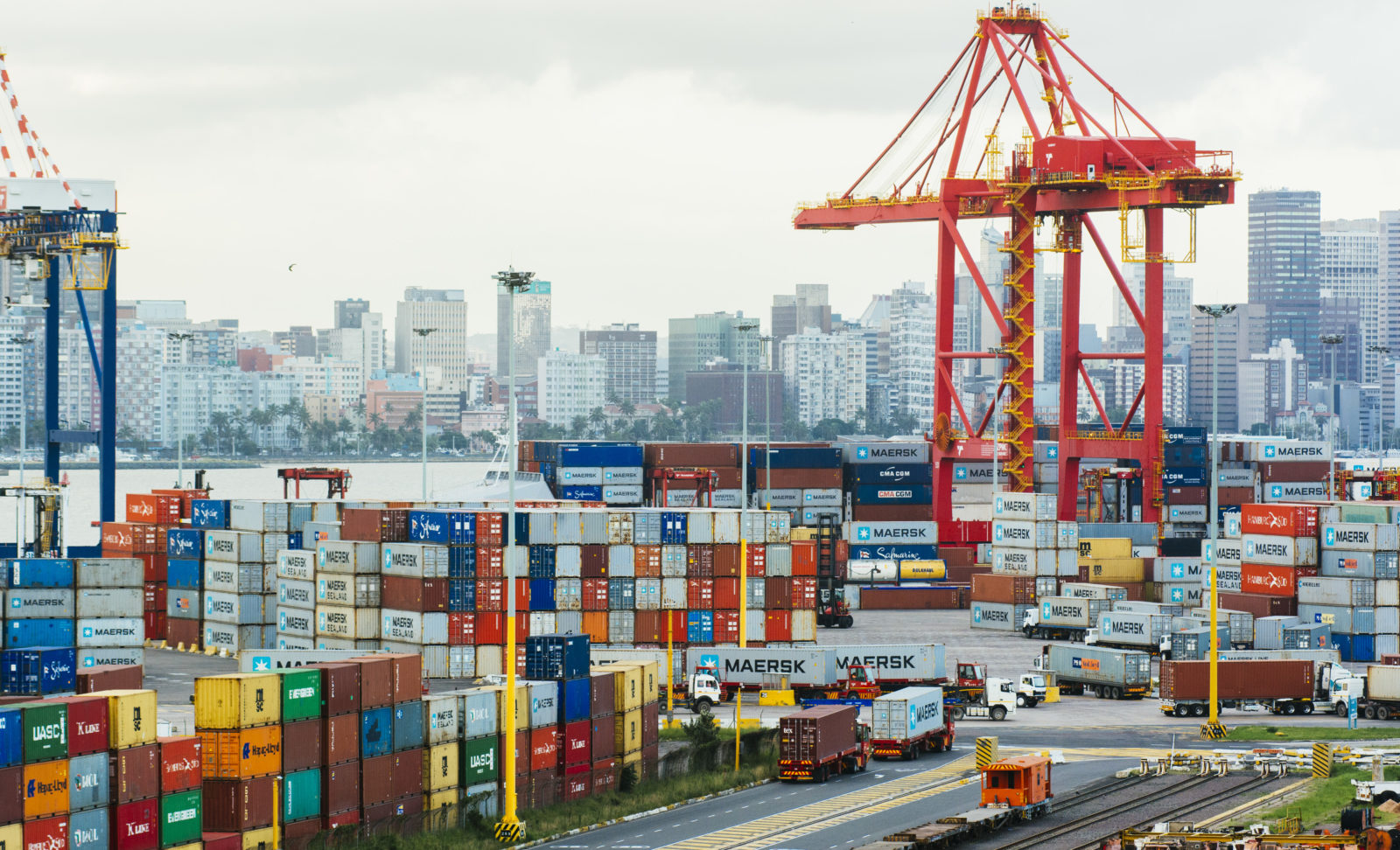 A ship-to-shore crane stands above shipping containers on the dockside at the Port of Durban. The BRICS New Development Bank approved a $200-million loan to Transnet in 2018 to expand the capacity of the port, through rehabilitating container terminal berths and upgrading port infrastructure to provide additional slots for larger vessels. (Photo: Waldo Swiegers / Bloomberg via Getty Images)

The New Development Bank will soon start lending to private-sector companies, says Vivian Ramathuba, senior professional at the bank’s African Regional Centre in Johannesburg, assisted by the fact that it could lend in US dollars or rands. But greater oversight is clearly needed to ensure the loans are not abused.

And it is likely to tap the bank more frequently after the imminent issue of the NDB’s first Rand-denominated bond — for R10 billion — on the Johannesburg Stock Exchange.

But since the African Regional Centre (ARC) of the Shanghai-based bank opened in Johannesburg in September 2017, South Africa’s borrowing has increased sharply, with six more loans, beginning in the second quarter of 2018.

South Africa’s borrowing from the bank now totals about $2-billion, representing about 16% of the total amount of $12.5-billion which the bank has lent to the five members of BRICS — Brazil, Russia, India, China and South Africa, according to the NDB website.

It lists seven “approved” loans to South Africa totalling $1.7-billion. The difference between the $2-billion and the $1.7-billion seems to lie in a further loan (or perhaps loans) not yet approved. At the South African investor conference in October 2019, the NDB pledged R23-billion (about $1.5-billion) in further loans.

Vivian Ramathuba, senior professional at the NDB’s ARC in Johannesburg, told a recent seminar organised by the Institute for Global Development (IGD) and the SA BRICS Think Tank at the National Institute for the Humanities and Social Sciences (NIHSS) in Johannesburg, that having the ARC in South Africa had helped the country secure more loans as it has enabled the bank to interact more with stakeholders to identify and prepare projects.

And further loans seem to be on the way, she indicated, including to private business. The NDB’s motto in its investor presentation is “Empowering nations through innovation and sustainability”. So far 94% of its loans have been to governments and government-guaranteed entities. Most of the loans have been to finance infrastructure; 39% of it for transportation, 33% for clean energy and 16% for water, sanitation or flood protection.

But the bank will soon start lending to private-sector companies, Ramathuba said, assisted by the fact that the ARC in Johannesburg could lend in US dollars or rands.

“We will be launching our R10-billion bond at the JSE and that will ensure we are helping to increase local participation.”

At the seminar, Bruno Arruda from Brazil’s embassy in Pretoria pointed out that one of the key decisions sponsored by the current chair Brazil of the 11th BRICS summit, held in Brasilia recently, was that the BRICS Business Council should play a greater role in determining the NDB’s loan policy. In other words, more NDB loans should go to private companies.

Referring to this decision, Ramathuba said her office was already partnering with the BRICS Business Council and meeting South African business leaders to seek private sector projects to finance:

“We have already done our first roadshow in the Western Cape, where we go in and identify projects. We will be visiting all the provinces… introducing the bank to the market. For the first three or four years, as a bank in South Africa, we have just been doing business with the state, state-owned companies. We are now going to expand and do business with the private sector. And obviously that will increase our activities.”

Ramathuba surprised many at the seminar by saying “money is not an issue, there’s plenty of money for funding infrastructure. If you look at NDB, if you look at AfDB (African Development Bank), we are all sitting with cash, we have targets.”

Ramathuba said the ARC would issue more loans when, as expected soon, other African countries joined the NDB and so became eligible to borrow from it. NDB membership is in principle open to all members of the United Nations but so far the five BRICS members have decided that only they may be members.

Cyril Prinsloo, a BRICS expert at the SA Institute of International Affairs, said there had in the past been disagreement among the five BRICS members about whether to admit new members to the bank. South Africa has always been eager to extend membership, at least to other African countries, as it projects its BRICS membership to Africa as providing a conduit for the rest of the continent to seek help from the big BRICS members. At the NDB’s annual meeting in April, all five BRICS member had come round to the view that bank membership should now be expanded, Prinsloo said.

The NDB is considering a list of the first round of new members and also deciding on the terms and conditions of admission. If more African countries were admitted, (as expected) the NDB would be able to finance more infrastructure for the rest of Africa, Ramathuba said. However, it has also become clear from experience so far that as South Africa borrows more from the NDB, it will have to exercise tighter political and fiscal control of the money.

Its first loan, in 2016, for $180-million, was to Eskom to finance transmission lines to connect renewable energy generating plants to the national grid. The money was not immediately taken up, apparently because the Zuma administration had frozen purchases of electricity from the private companies which own and run the renewable energy plants — solar and wind. The assumption was that this was because Zuma was focused on building nuclear energy plants. The NDB loan was later revived and the NDB has explained it will be used specifically to transmit electricity from the renewable plants to Soweto.

The second loan, of $200-million to Transnet during the second quarter of 2018, also ran into trouble. It was supposed to be used to expand the capacity of Durban port by rehabilitating container terminal berths and adding extra berths for larger vessels. But the project was delayed because “irregularities” were discovered in the procurement tender process. NDB sources have said that a new contractor is being appointed for this project. DM