Trump Trumped – now it’s on to the senate 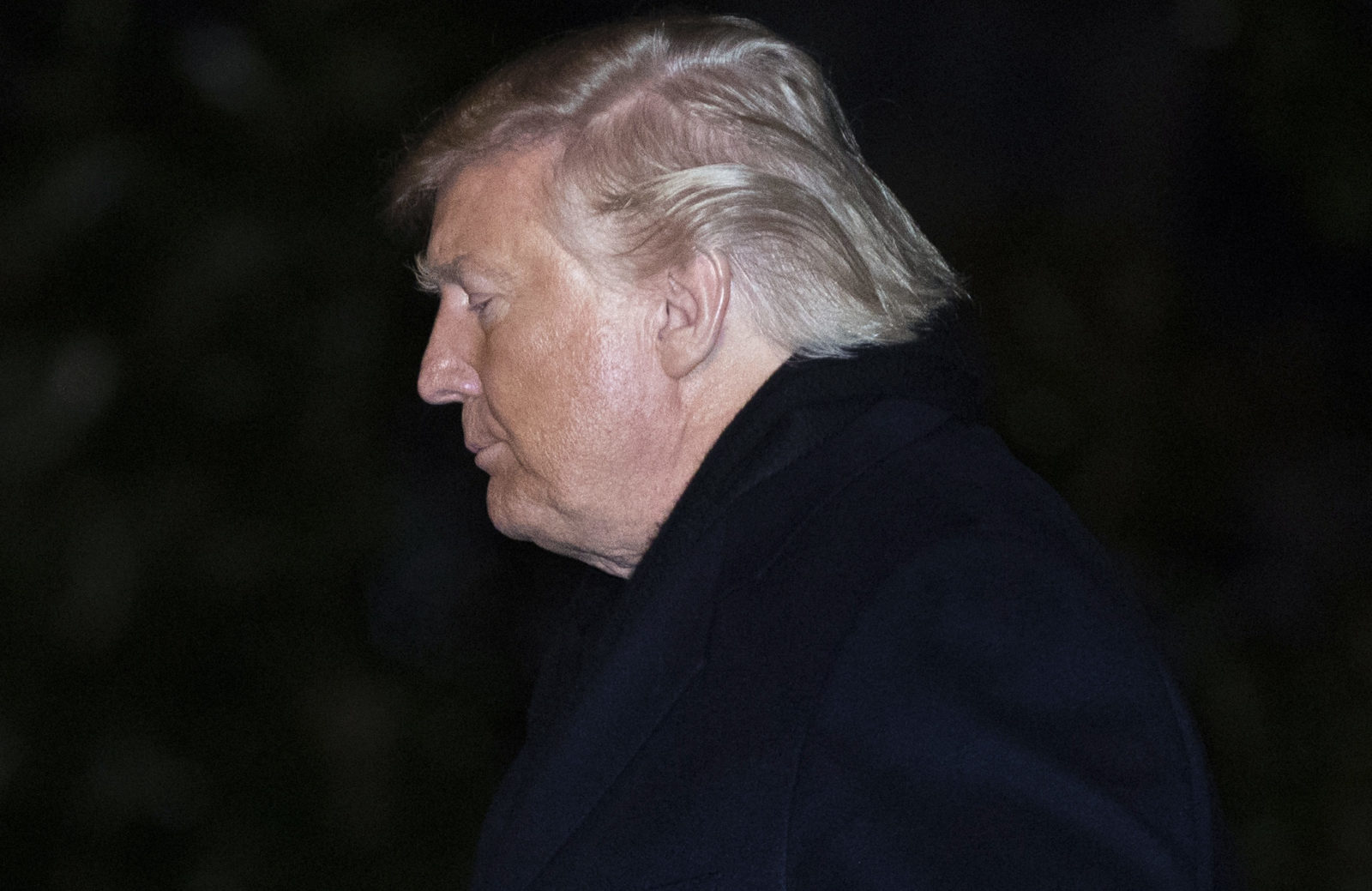 US President Donald Trump walks on the South Lawn of the White House after disembarking from Marine One in Washington, D.C., U.S., on Wednesday, Dec. 18, 2019. The U.S. House of Representatives impeached Trump on charges of abuse of power and obstructing Congress, the culmination of an effort by Democrats that further inflamed partisan tensions in Washington and deepened the nations ideological divide. Photographer: Michael Reynolds/EPA/Bloomberg via Getty Images

The president has been impeached for just the third time in American history. Now for the trial. And thereafter, there is an election too.

When Donald J Trump finally passes from this mortal coil, the first line of the summings up in every one of the publications and broadcast media he loved to call the fake news will inevitably begin with the following citation: “Donald John Trump, 45th president of the United States, and only the third president to have been formally impeached by the House of Representatives in the history of the American republic …” And then the history books of the era will follow suit as well. This is clearly not how Trump would wish to be remembered by future generations.

On Wednesday, 18 December 2019, the House of Representatives, in a floor vote that virtually mimicked the partisan divide of the chamber, passed two articles of impeachment. These two articles charged him with abuse of power and obstruction of Congress. This historic moment came after hours and hours of floor debate – including some truly over-the-top references to Trump as having been treated less fairly than the way Pontius Pilate is recorded as having dealt with a certain itinerant Galilean preacher and miracle worker, some two millennia earlier.

The first charge spoke to the president using the resources, powers and mechanisms of the presidency and government to exact (or, at least attempt to), a corrupt bargain from the newly elected president of Ukraine. There was Trump’s insistence on a public announcement of an investigation into alleged corruption by former vice president Joe Biden and his son, before Trump would grant the release of already-appropriated military hardware to a beleaguered Ukraine trying to defend itself against Russia, and a face-to-face presidential summit in the White House was also promised.

The underlying crime was his using these government resources for personal political advantage in order to wound Biden’s bid for the Democratic Party presidential nomination in 2020, given that the Trump team certainly saw Biden as the toughest competitor. This was further based on the debunked idea that Ukraine, and not Russia, had been the primary intervening state in the 2016 election on behalf of Hillary Clinton.

This is a myth that is still assiduously being pushed by Rudy Guiliani, in his dual role (and poster child for deeply damaging conflicts of interest), as the president’s lawyer as well as a for-hire role as an influence peddler for a whole raft of Ukrainian bag men, street thugs, and wannabe wheeler dealers. In turn, all of these heavies just coincidentally happen to be opposed to the new Ukrainian president and his “new broom sweeps clean” approach.

The obstruction of congress charge, meanwhile, pertained to the unprecedented refusal by the president to authorise any senior White House aides or cabinet officials to respond to congressional subpoenas, to testify, or summonses to provide documents relevant to the abuse of power charge. This obdurate refusal was at odds with practice by the Bill Clinton administration, and even, to some degree, by the Richard Nixon administration, albeit grudgingly and after resorts to the courts to force the issue. (Those officials who did testify earlier had acted in accord with their constitutional regard for congress’ role as a check on the chief executive.)

Now the action shifts to the senate where the fact the Republicans hold a majority of the seats would seem to presage a near-certain outcome of not guilty. To convict requires a two thirds majority of senators present and voting, and with Democrats holding less than a majority, this would seem to require 20 Republican senators to vote for the constitution rather than the president. Unlikely. Very unlikely. But there are more Republican-held senatorial seats up for election in 2020 than Democratic ones, and if public opinion starts to shift, some Republican incumbents may read those tea leaves carefully and locate their spines after all.

Moreover, the senate trial is now almost certain to begin only in early January, just as primary and caucus elections have begun for Democrats. Such polls will be a way for elected officials to judge and to calibrate the effect of the senate trial on voters.

Meanwhile, Speaker Nancy Pelosi apparently has one more play left. Until the house hands over the formal vote on articles of impeachment to the senate, the trial apparently doesn’t begin. The Pelosi play, therefore, is to try to extract agreement from Republican majority leader Mitch McConnell that rather than a quick-time march through the trial proceedings as the GOP hopes for, the trial would also feature some star witnesses, such as the president’s acting chief of staff – this time summoned to testify by a subpoena issued in the name of the trial’s presiding officer, the Supreme Court’s chief justice.

Has Trump been fazed by any of this? He would say an emphatic “Naw! No way. Fake news. Witch hunt!” But his behaviour seems even more erratic and unhinged than usual. Just before the house vote, he had sent a six-page letter to Pelosi, filled with vaingloriously, over-the-top rhetoric, misspellings and grammatical barbarisms. In fact, the letter could easily become a university psychology course exam – having students identify the personality disorders contained in it and then recommending what treatments are appropriate under the circumstances.

Then, as the vote was proceeding, Trump was in Michigan, giving a speech that ran on forever. It was packed with outrageous riffs that, among others, attacked both Democratic Congresswoman Debbie Dingell (the widow of and successor to her late husband, long-time Representative John Dingell) and her husband, along the way. Watching more than a minute or two of that speech might easily be characterised as consuming a product dangerous to one’s health and sanity.

Going forward, we shall all be watching to see how Pelosi’s gambit for witnesses plays out; how the public mood stabilises or changes as the reality of impeachment sinks in; and how senators and congressmen and women deal with constituents in the period between the impeachment vote and just after the New Year’s Day break. Stay tuned. DM