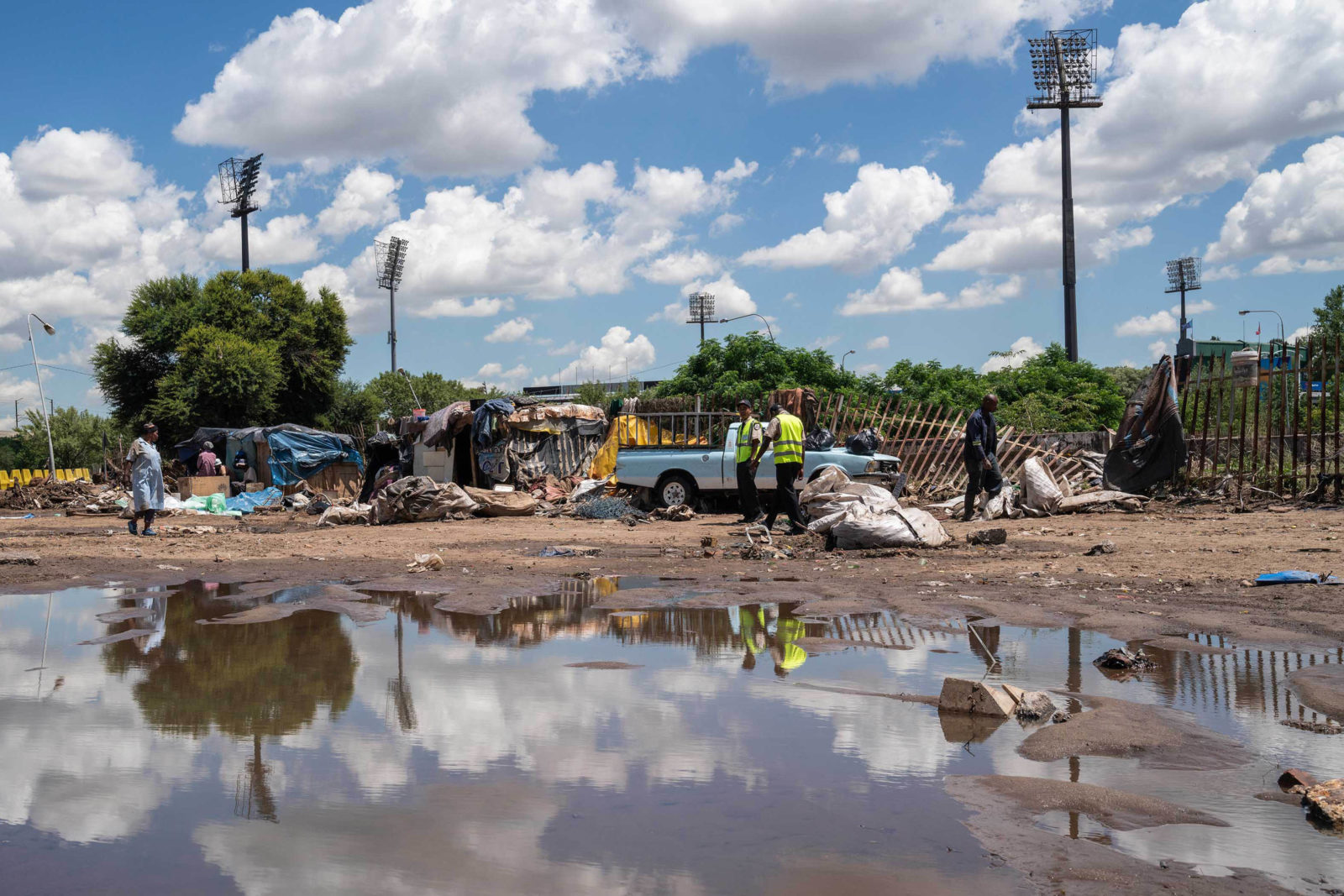 12 December 2019: Shack homes that were destroyed at Mushroomville during the recent flooding after the nearby Hennops River burst its banks. Picture: Ihsaan Haffejee

About 100 recyclers were displaced by the recent floods in Centurion, which resulted in the death of one person and the destruction of several homes. The floods also wiped out many waste pickers’ hard-earned savings.

Tebello Morena* is supposed to be back home in Lesotho, but without a passport and after his savings were washed away in a flash flood, he is stuck working in South Africa throughout the festive season.

Morena works as a recycler. He is part of the bagerezi (hustlers) of Mushroomville, Centurion, situated on the banks of the Hennops River, where a community of more than 100 waste pickers have been living for 16 years. By sorting through and recycling materials, he can make about R800 a month.

He managed to save R4,800, which he had hidden in his makeshift accommodation, which was made of cardboard boxes and refuse bags. Now he has nothing left after heavy rains led to unexpected flooding, which resulted in the death of one person.

Morena is wearing a shirt that would fit someone half his size. “To my wife back home, it will look like I am just here having fun or dating other women in Gauteng, and I don’t want that. I cannot look like I cannot take care of her or … making her starve in our first year of marriage,” he says, fidgeting with a dead cellphone.

He left the badly scratched Blackberry to dry in the sun for a few days so he could call his wife and explain he will not be coming home for Christmas this year.

Morena was hoping to head home in mid-December to share some of the money with his new wife, who lives in Lesotho. She is pregnant and the baby is due in February.

He has no temporary passport or identity document, but even attaining those documents would not enable him to go back home.

“Even if I found R500 for transport, I would still not have money to give … to my parents or my in-laws … I can’t go anymore, what am I going to go with?” he shrugs.

He has been working for nine years, but his wife does not know what work he does.

Morena says things started to sound bad in the early hours of Monday, 9 December 2019. Before he knew what was happening, water was in his shack, flinging him from one side to the other, destroying his home and leaving nothing in its wake. There wasn’t a lot of water, but its force made it dangerous.

“Even if you could swim, the water was strong. It would push you. So when I saw that log, I held on,” he says, pointing to a huge uprooted tree on the riverbank.

“The water took me from here to there, and when I eventually got a chance to stand, I made my way to the dry part. I don’t even know how to swim. I was just bobbing my body in the direction of safety,” he explains.

Seboka Seboka did not make it out of the flood alive. He lived in the shack opposite Morena. All that remains of his home is a small muddied carpet. The bagerezi say he drowned while trying to make it to safety.

Unlike the others, Morena has given in to the realisation that most of his belongings are gone, including the tools of his trade. This ruins his prospects for making money. He managed to salvage one of his back-up trollies. “I will gereza [hustle] bottles with this one. It cannot carry card boxes though,” he says. “I have another one here, but the other one was taken by the floods so I am not sure what I will do for money to make it. Right now, my head is all over the place. People are drinking their stress away. I am just buying cigarettes,” he says.

By 14 December, people were collecting what they could and leaving it on a large dry patch of land surrounded by mud in the middle of the clearing. Following the flood, some dwellers were moved to a local community hall.

The house is falling

Berenice Ntika, 59, scratches through the moist soil with her bare fingers. She is hopeful that she will find her passport in what remains of the muddy mess. She also hopes the money she spent all year saving will miraculously appear.

Ntika has been living in Centurion since 2002, moving to the private land opposite the SuperSport Park cricket grounds after a court order. She did not anticipate that the much-needed rain would result in a devastating flood.

“At least she’s found hers,” she says, dirty fingers pointing at a woman dusting off crusty mud from her legal document. “I haven’t found mine, and I have been searching all morning,” she says in SeSotho.

The R4,600 she had saved since the beginning of the year was swept away by the river. At the time, money was not her concern. She had to make it to safety.

“At around 1am, something told me to take my money and move it from my hiding spot, but I did not listen to my instinct,” she says. Her hiding spot was an inconspicuous wooden plank holding up her makeshift shack.

Despite living on a river bank since 2002, Ntika says she is afraid of water and was worried when she saw the levels increasing and decreasing. She usually wakes up at 4am to start her waste collection rounds in the suburbs of Centurion.

“I was afraid that morning so I went to go and sleep with my daughter before I heard …” she makes a hissing sound, “and told my daughter that we should leave the shack because I could see that water was coming in.”

Her daughter covered up open crevices, assuring her mother the rain would subside while using her body to shield the door.

When they opened the door, the situation was graver than they had expected, and their only option was to make their way to higher ground. There was no time to reach for anything.

“I kept thinking and saying, ‘I’m leaving my children,’” says Ntika. Death might be her fate and she says she graciously accepted it for choosing to live on a river bank.

Ntika, her daughter and her grandson, could not make it to safety using their usual route during heavy rains and flooding. The water came up beyond the river bank, spewing all sorts of litter inside their enclave and on to the main road.

“If it wasn’t for this tree, I don’t know if some of the people here would be here … so many people climbed on it,” she says.

Pointing up towards a grassy area close to the Gautrain pillars connecting Centurion and Hatfield, she says: “We sat up there, and it felt like the water was still getting higher so we went to a higher incline because I was scared.”

Ntika says she has not experienced a flood like this since 2013, but this flood was worse.

Earlier this year, the owners of the property wanted to move the waste pickers off the land to develop it, but the City of Tshwane had to make provision for alternative accommodation in which they could still make a livelihood first.

The city is still to present a plan to the North Gauteng High Court detailing where they would accommodate the waste pickers. They have apparently identified different sites, but according to by-laws, they would not be able to house them in a place that would allow for both accommodation as well as waste sorting and storage. DM

*Not his real name.