2019 Sports Team of the Year: Springboks 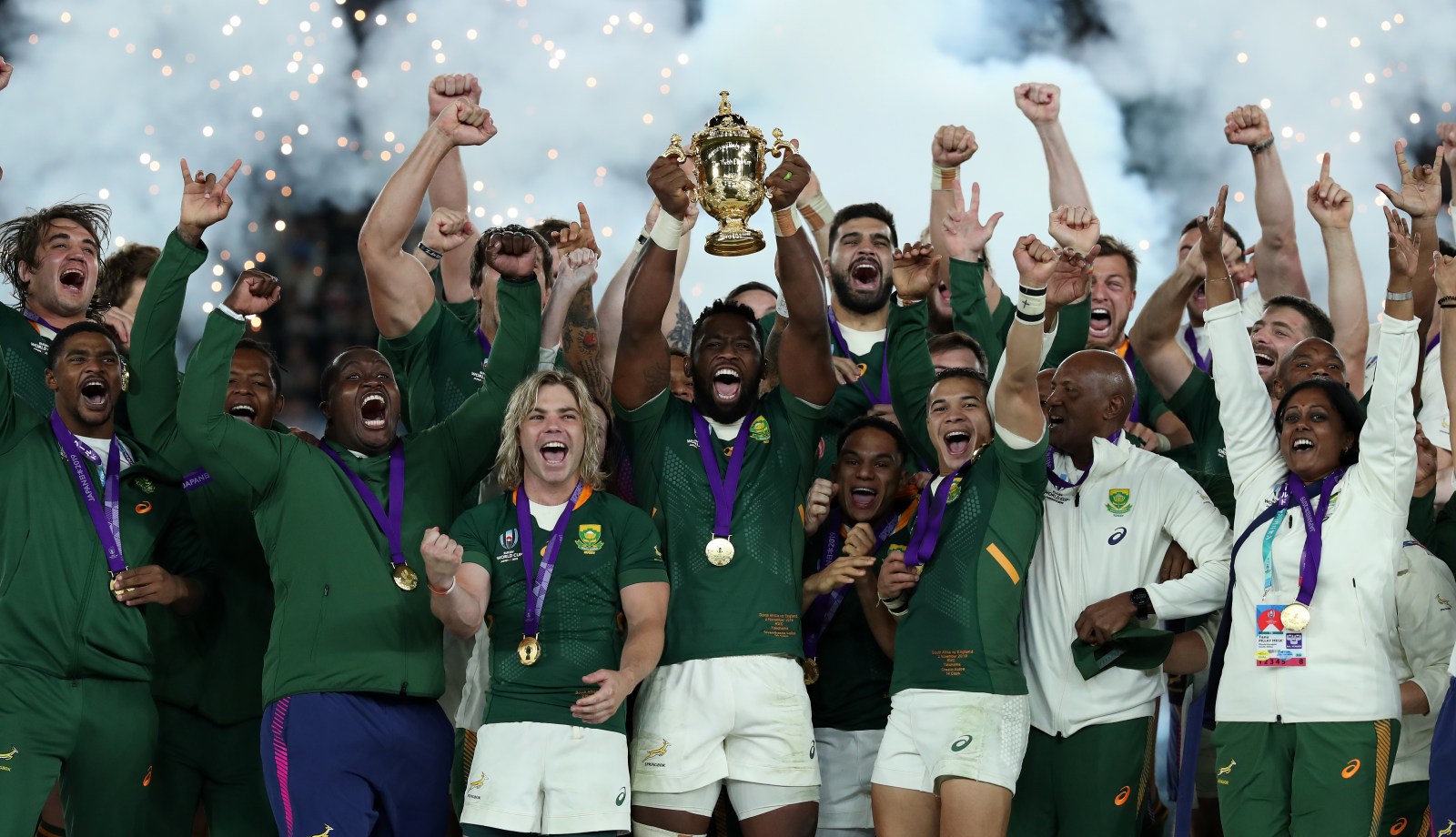 The Springboks’ unexpected and unlikely, yet universally popular and welcome victory at Rugby World Cup 2019 in Japan was easily the feel-good sports story of the year.

Collectively, the Boks peaked in the final in Yokohama where they thrashed England 32-12, having started the tournament with a 23-13 loss at the same venue against the All Blacks six weeks earlier.

They became the first world champions to have lost a Pool match and were the first team to claim the Rugby Championship and the World Cup in the same season. It was a groundbreaking year in every way as they ended 2019 ranked number one in the world.

But, more than winning titles, the Springboks made South Africa, and much of the world, fall in love with them again after years of performances oscillating between mediocre and pathetic.

Kolisi was central to that narrative because of his rags to riches story, born into poverty and elevated to hero status as the eighth captain to lift the Webb Ellis Cup.

Kolisi’s easy charm, intuitive understanding of the significance of his team’s achievement and an understanding of the gravity of his central role in the chronicle of RWC 2019 underlined his leadership stature. He was not overwhelmed, as lesser men might have been, but rather inspired.

Kolisi, 28, welcomed the pressure of his unique position and he embraced the story, providing the world’s media with genuinely moving soundbites that revealed a deeply united squad.

“We have so many problems in our country, but to have a team like this… we come from different backgrounds, different races and we came together with one goal and wanted to achieve it. I really hope that we’ve done that for South Africa to show that we can pull together and achieve something.

“Since I’ve been alive, I’ve never seen South Africa like this. Now, with all the challenges we have. The coach told us before the last game, ‘We’re not playing for ourselves any more; we’re playing for our people back home.’

Kolisi led the team with humility and strength and he and all the team’s key players produced massive performances at crucial moments. Nothing underlined this more than their collective performance in the final.

Before kick-off, coach Rassie Erasmus asked his team to do only two things – trust in the game-plan and give everything. It was that simple. And they listened.

England were overrun from the beginning, conceding a penalty 30 seconds after kick-off. The Boks never allowed them into the game from that moment on.

England never led in the match. When Bok wing Makazole Mapimpi became the first Springbok to score a try in a RWC final, at the third time of asking with 14 minutes to play, the contest was over.

The decisive try started when fullback Willie le Roux collected an England kick and went to the ground over the halfway line. Scrumhalf Faf de Klerk quickly spotted space down the blindside where hooker Malcolm Marx and centre Lukhanyo Am put Mapimpi into space. The wing chipped over the top and Am collected the ball on the bounce before feeding an insouciant pass back to Mapimpi.

Aesthetically it was a beautiful score thanks to Am’s deft return pass when he could have scored himself. The way he continued to canter into the England in-goal area after putting Mapimpi away, added to the elegance of the moment. It again summed up the Boks’ collective spirit. Am was not interested in scoring himself when a teammate was in a better position to finish the job.

It was also the moment that alleviated all pressure as the Boks finally gained the scoreboard cushion their dominance deserved.

Erasmus and assistant Jacques Nienaber had a conversation before the final. It went along the lines of: “Imagine we are well ahead with a few minutes to play. We can take it all in and enjoy the moment.”

Sports psychologists talk about the power of visualisation and positive affirmation and this was a classic case of those exercises coming to fruition.

With fewer than 10 minutes to play, a relaxed Erasmus sent a message to Nienaber, who was on the sidelines doing duty as physio during the contest. The coach spoke to Nienaber through his earpiece and asked about making some substitutes now that the outcome was secure and everyone could enjoy the final stages.

Nienaber was confused: “What’s the score and how much time is left?” he asked. He was so focused on strategy and team processes he had no capacity to notice such trivial matters as the scoreboard. It was all about the team doing the job it had been tasked to do. Until the referee ended the game, Nienaber couldn’t allow his focus to shift.

That exchange was a perfect summation of the Springboks’ campaign. It was concentrated and process-driven. Victories and ultimately success were a result of many moving parts operating in near-perfect harmony, honed in an environment of excellence.

The celebrations in South Africa were massive and joyous. And they went on for a week as the team paraded the Webb Ellis Cup across the country, from Soweto to Zwide and Pretoria to Delft.

“Look at our team!” Kolisi told a crowd of about 10,000 people on Cape Town’s Grand Parade during the final leg of the tour. “They are from different races and different backgrounds, but we came together for South Africa.

“And we are saying to you today, just take a look around you… there are so many different people from different races and backgrounds. But look how special this is. It’s time for us South Africans to stop fighting and arguing. Let’s put South Africa first, so we can move forward as a country. Thank you, we appreciate you.”

The Springboks of 2019 showed the way. Aweh! DM