‘Keep it in the ground’: Civil disobedience and the struggle for climate justice in Germany 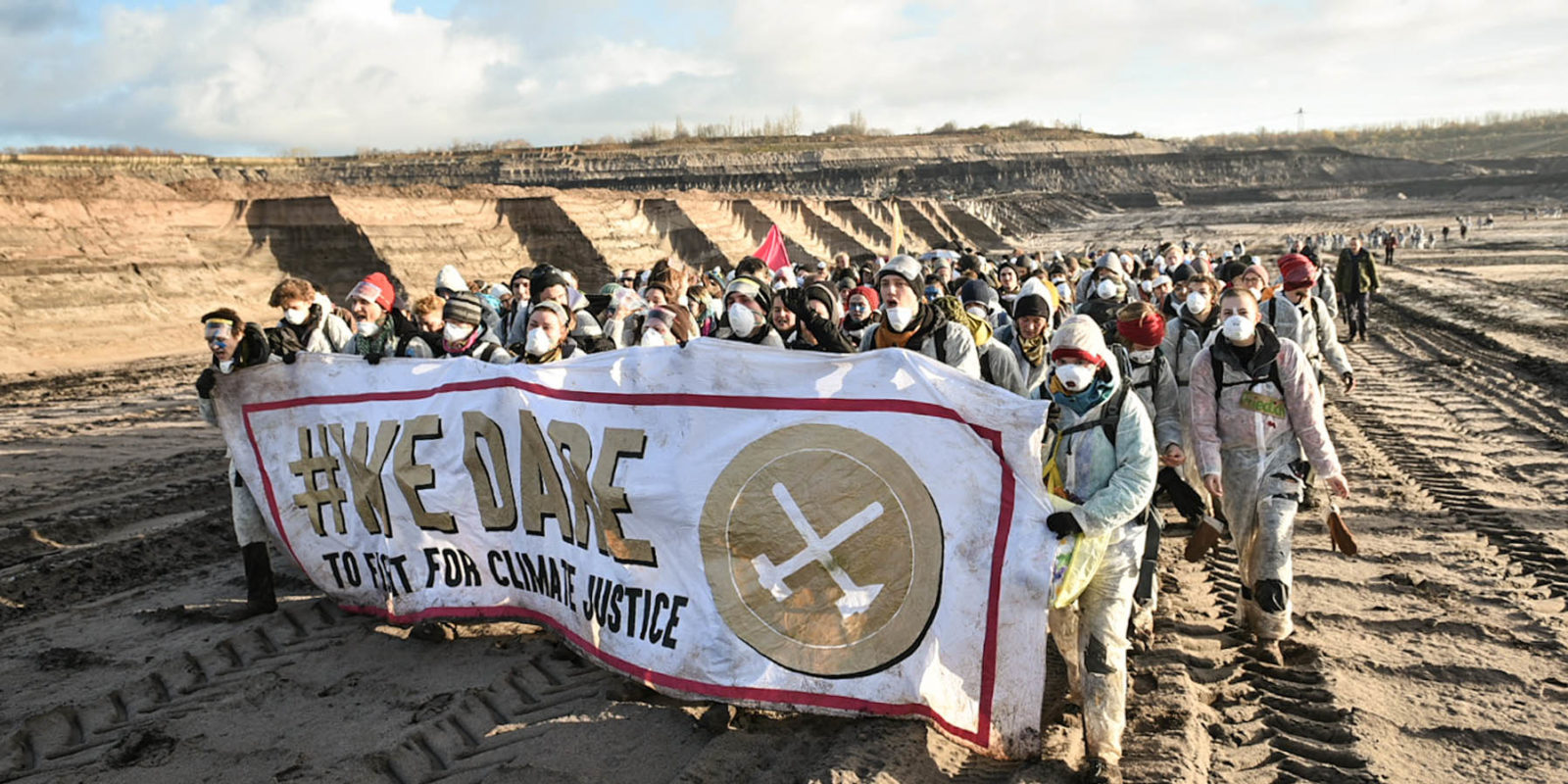 Mass actions of civil disobedience for keeping coal in the ground have led to the emergence of a climate justice movement in Germany that succeeded in putting the coal phase-out on the political agenda. What are the movement’s successes and challenges and are there any insights for the South African context?

What looks like astronauts that have landed on the moon is actually a mass protest for climate justice. When thousands of activists dressed in white overalls and equipped with dust masks, backpacks and sleeping bags enter the moon-like landscape of open-cast lignite mines in Germany, they are there to occupy coal infrastructure and demand an immediate coal phase-out.

This year marked the high point of climate mobilisations in Germany thus far. An impressive 1.4 million people protested in the streets when the youth-led climate movement Fridays For Future called for a climate strike in September. But already in the years before the school strikes took off, the grassroots campaign Ende Gelände (translated as “Here and no further”) has laid the groundwork in building a radical climate justice movement and putting the coal phase-out on the political agenda.

In November, Ende Gelände launched its third successful mass action of civil disobedience this year, with thousands of activists blocking open-cast coal mines and coal train tracks. When the first actions took place four years ago, they were only duly noted by the media. Since then, the movement has grown in numbers, actions became more frequent and media coverage has increased. Now, lively public debates on climate change and fossil fuels take place and a large majority supports phasing out coal sooner rather than later.

From global to local

It all began when activists in Germany mobilised for the international climate conference in Copenhagen in 2009, to meet up with a global climate justice movement in the making. There was much hope for a far-reaching and binding climate agreement. But negotiations failed, no treaty was signed and activists returned home defeated and disillusioned by the climate conference circus. After recovering, activists decided to switch gears, to stop summit-hopping and descend from the global level back down to the local level. The logic behind this was straight-forward: If we can’t pressure the political elites into taking the necessary steps in the international policy sphere, then we must turn to the crime scene of fossil fuel extraction and confront the carbon criminals on the ground. In Germany, the obvious targets were the huge open-cast lignite mines that are Europe’s largest carbon emitters. Despite its public image as a green front runner, Germany still relies on dirty energy from coal. Hard coal and lignite (coal of lesser quality) make up 35% of the electricity mix.

The central tactics revolve around orchestrating mass actions of civil disobedience in non-violently blocking coal infrastructure. Civil disobedience has a long history from Mahatma Gandhi to Rosa Parks to the anti-apartheid struggles in South Africa. It’s the deliberate overstepping of legal boundaries to create awareness of injustices. It’s illegal but it may nonetheless be regarded as legitimate. The German playwright Bertolt Brecht is often attributed with the quote: “When wrong becomes right, resistance becomes everyone’s duty.” The movement works through flat organisational structures, holds action training to prepare activists, assembles a team to assist with legal challenges and offers many ways to support the action without going down into the mine.

These relatively accessible, open and transparent actions of civil disobedience offer a pathway for many newcomers to become activists. Many become radicalised in the process and join in building a climate justice movement from the bottom up. Many more describe it as a profound experience to actually see that one’s own actions have tangible effects and to be able to stop climate destruction where it takes place, even if it’s just for a few hours or days. It creates a strong sense of empowerment, solidarity and hope in times of a rapidly worsening climate crisis, the inaction of political elites and the rise of neo-fascist forces around the world.

Invading large coal pits, dodging police clubs and preventing the massive excavators from tearing up the earth also makes for great storytelling of the David vs. Goliath type. How can you not sympathise with the unarmed protesters putting their bodies on the line for the higher good of climate justice? How can you not be outraged at the big coal corporations getting rich off the climate crisis? And it has worked. The images have helped spark public debate on energy and climate policy in Germany and shift public opinion toward a coal phase-out. Yet, the national government has not been impressed. While a recent poll shows that 67% support a coal phase-out by 2025, the government is set on not phasing out coal before 2038.

Research confirms that this is far too late for reaching national climate targets and staying below 1.5°C global warming. But what is specifically interesting is the significant gap between public opinion and government (in)action. Evidently, the transmission belt between what the public wants and what policy-makers do is not working. The assumption that if you shift the public debate, the government will necessarily follow suit, is flawed. Thus far, the climate justice movement has won the symbolic battle but lost the policy battle.

There is another issue. Not everyone in Germany is supportive of the climate justice movement. Unions fear the loss of high-paying jobs in the energy and energy-intensive sectors, there is significantly less support in the mining regions for the coal phase-out and right-wing forces are feeding off feelings of discontent and disenfranchisement. Strong tensions have surfaced between labour and climate justice activists.

Unions have been at best cautious to advocate for a coal phase-out and a just transition. At worst, they have counter-mobilised against climate justice activists and have lobbied government for pushing back the phase-out date. What the climate justice movement wants is rapid decarbonisation and system change. But this enormous task of radical transformation is unlikely to take place if progressive forces are divided along the lines of jobs vs. climate justice.

This is becoming more of an issue as the new challenge on the horizon for the climate justice movement is the transformation of a carbon heavyweight – the German auto industry. It employs 25 times more people than the coal sector, in high-paying jobs with good working conditions and it’s a stronghold of unions. What will be the answer of the climate justice movement to the question of jobs and the threat to union power?

Though the context is different, there are perhaps a few insights to be shared from the experiences of the German climate justice movement for South Africa. First, the strong focus on climate change in the public debate in Germany is to a large extent attributed to the growth of social movements. They raise awareness of the climate crisis, scandalise the political inertia and use innovative protest forms to make their voices heard.

Second, the conflict in Germany involved clashes between unionists and environmentalists, the pitting of jobs vs climate justice and the lack of a shared vision for a just transition. This once again reaffirms the need for broad alliances that can overcome the potentially divisive lines between the red and the green. If it’s so hard to push through a coal phase-out against the unions and a relatively low number of coal workers in Germany, it’s going to be exponentially harder in the South African context marked by high unemployment, high inequality and high poverty. Unions in South Africa must act on the recognition that climate change hits their members first and make serious commitments to moving to a low-carbon economy. Environmentalists in South Africa must centre economic justice and realise that a just transition will only take place if it is supported by the vast majority of the working poor and the unemployed.

Lastly, let’s imagine a likely near future when climate disasters hit South Africa harder each year with droughts becoming the new normal, temperatures regularly spiralling up during heatwaves and cyclones devastating the coastlines. Let’s also imagine that the Eskom crisis gets out of control, the parastatal company implodes and there’s a need as well as an opportunity to fundamentally overhaul the energy system. Let’s further assume that labour, environmental and community activists have managed to come together around a climate justice agenda, have built a broad movement and have succeeded in shifting the public debate in favour of a radical just transition. What if the government doesn’t follow suit? What if vested interests and corruption are stronger forces than the will of the people? What if the fossil fuel industry is kept alive in spite of economic, social and ecological common sense? The experiences of the climate justice movement in Germany have shown that it is one thing to build symbolic power and to influence public debates. But attention has also to be directed to building institutional power to effect policy changes and wrench a just transition from the hands of the political elites. DM

Tobias Kalt is a visiting German scholar-activist at Wits University.

‘Keep it in the ground’: Civil disobedience and the struggle for climate justice in Germany