City to use bylaws to remove refugees

By Barbara Maregele for GroundUp• 18 December 2019 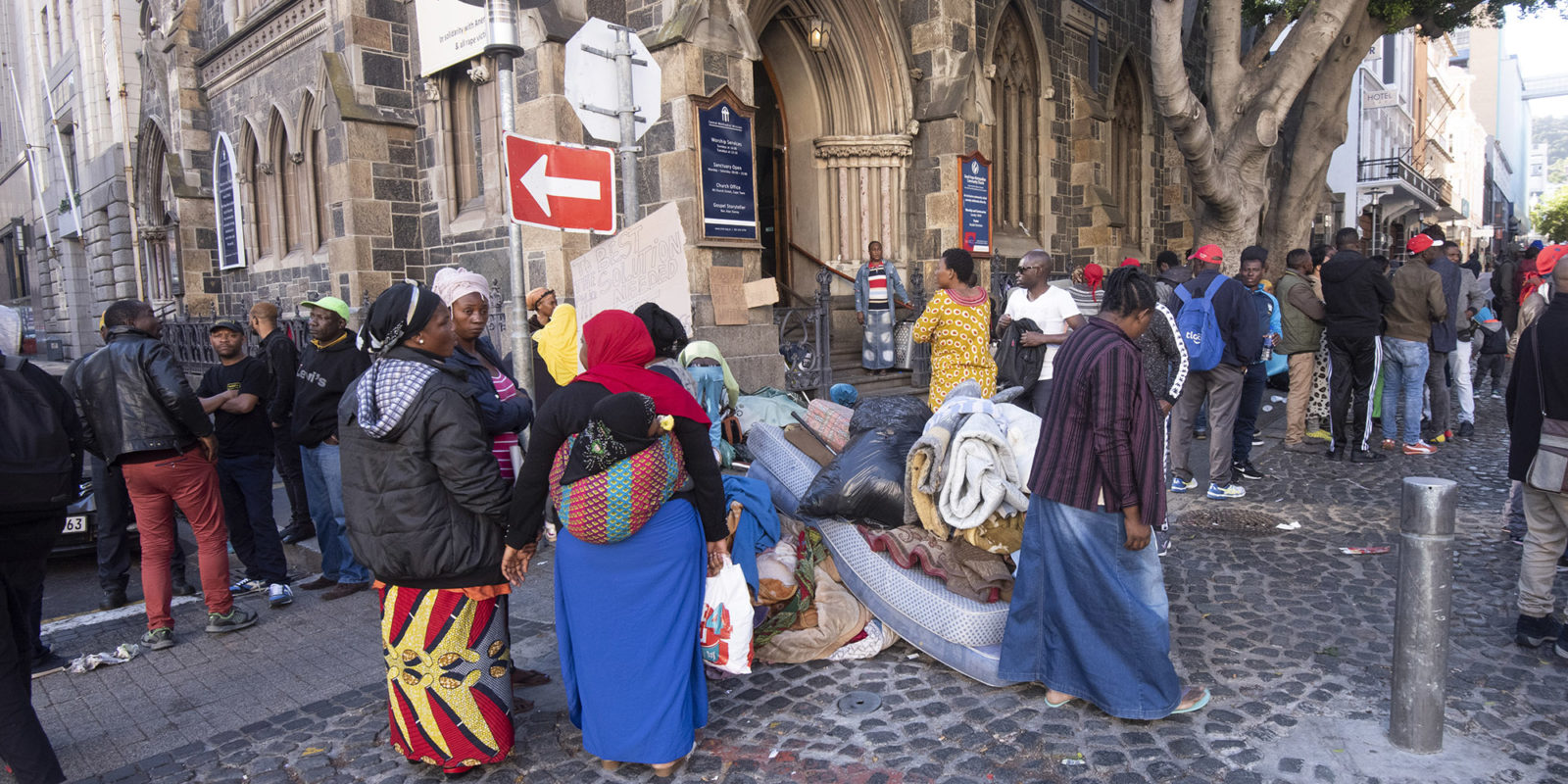 Displaced migrants take shelter at the Central Methodist Church in Greenmarket Square after being evicted from the UN High Commission for Refugees offices where they had staged a sit-in on October 30, 2019 in Cape Town, South Africa. (Photo: Gallo Images/Brenton Geach)

Mayoral Committee Member for Safety and Security, JP Smith says failure to do this will have dire consequences for the informal traders on Greenmarket Square.

The City of Cape Town says it will now enforce its bylaws against the group of refugees living on Greenmarket Square in the city centre for the past several weeks.

Recently, the city’s use of its bylaws — which include the 2007 Streets and Public Places as well as the 2009 Integrated Waste Management — was brought into question through a court case against the city by several homeless people.

The refugees have been protesting for months — previously outside the United Nations High Commissioner for Refugees (UNHCR) offices on St Georges Mall, before they were forcefully removed in a chaotic scene on 30 October 2019. They have been demanding to be resettled in another country.

Since then, most of the destitute families have been occupying the Central Methodist Mission, a church on Greenmarket Square. But because the church is packed to capacity, those still seeking refuge have been occupying the space outside the church on Longmarket Street. This led to the traders on Greenmarket Square, many of whom are themselves asylum seekers, refugees or immigrants, writing a letter of complaint to Mayor Dan Plato stating that the protest by the refugees was causing them to lose business.

On 9 December, the city lodged an application for an urgent interdict in the Cape High Court against the refugees.

On Tuesday, 18 December, Mayoral Committee Member for Safety and Security, JP Smith said the city would be withdrawing the application. “It became apparent that the court intended to compel the city to give alternative and emergency accommodation to the refugees,” he said. This, he said, could constitute “queue-jumping” and “set a precedent for 280,000 or so estimated refugees in the city to claim the same rights”.

Smith said the city disagreed with the court’s view as it was not “feasible, practical or even logical”. He said the city had no choice but to take the advice of the national minister of home affairs who advised that the city enforce its bylaws. “In the absence of an effective intervention by the Department of Home Affairs, which has not assisted in resolving this matter, we are therefore left with no other option but to enforce our by-laws,” he said.

“Failure to do so will have dire consequences for the informal traders on Greenmarket Square. The city cannot abdicate its responsibilities — as home affairs has with the immigration matters — to deal with the management of that public open space and will, therefore, be instituting enforcement actions over the coming weeks. Currently, the refugees are preventing the city’s cleaning staff and that of the Cape Town Central City Improvement District (CCID) from even cleaning the area,” he said.

In a court hearing last week, the advocate for home affairs, advocate Seth Nthai, argued that the department cannot conduct a verification of the refugees under the current “inhumane and cramped conditions” they are living in at the church.

The court has not yet issued a judgment. Asked why the city does not rather appeal the ruling when it is ultimately issued (if it is unhappy with it), Smith responded: “The city will be appealing the decision. You need to appreciate part of the interdict application was to compel home affairs to find a solution around the immigration issue which only it is constitutionally competent to do, so that we would need to resort to law enforcement interventions which are not ideal under these circumstances.”

It’s not clear to GroundUp how the city can appeal if it has withdrawn its court action. DM