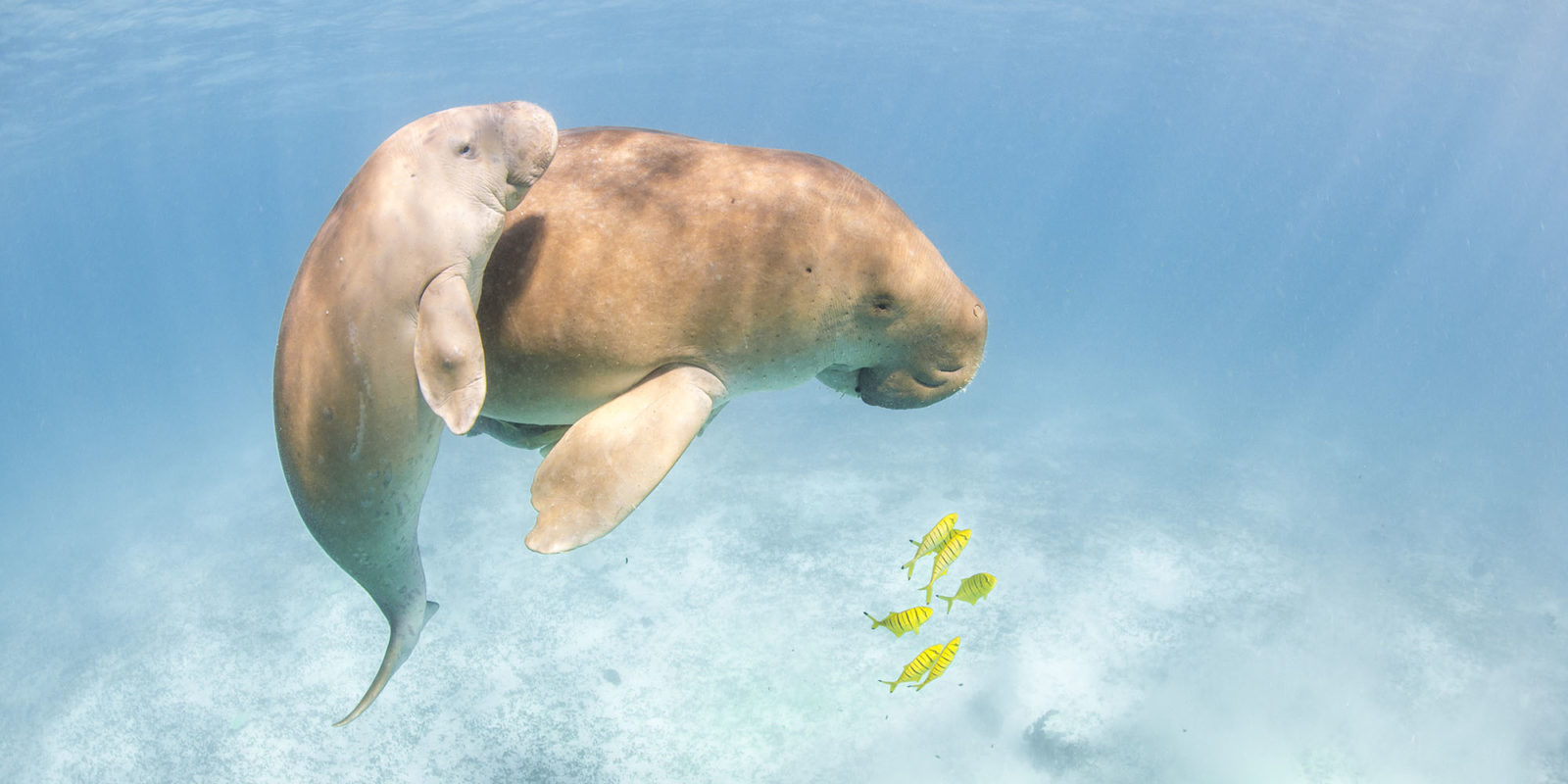 A dugong mother and calf. Dugongs are herbivores, feeding mainly on sea grasses and are therefore restricted to shallow coastal habitats with seagrass meadows. The dugong’s tail flukes and flippers are similar to those of dolphins and are raised up and down in long strokes to move the animal forward. They can swim or rest underwater for up to six minutes, though they normally surface every two-and-a-half minutes to breathe. They communicate through chirps, whistles, barks and other sounds that echo underwater. (Photo: Sam Lawrence)

Sasol is planning a new oil and gas exploration venture next to Bazaruto National Park, spurring the International Union for the Conservation of Nature to call for more intensive action to safeguard the last viable population of dugongs in East Africa.

The clear and shallow waters off the coast of East Africa were once home to a multitude of dugongs – strange, mermaid-like sea mammals that have all but vanished from the western part of the Indian Ocean.

As recently as 1967, researchers saw herds of up to 500 dugongs swimming off the coast of Somalia, while similar-sized herds also grazed on seagrass meadows as far south as the Mozambique capital of Maputo.

But over the last few decades, their numbers have crashed dramatically. Today, the last viable population in this region clings to life in the vicinity of the Bazaruto Archipelago, a cluster of tropical islands off the central Mozambican province of Inhambane.

It is here that the South African chemical and energy giant Sasol is exerting renewed pressure on the Mozambican government, seeking permission to deploy oil and gas drilling rigs to dig test wells, as well as a seismic ship to conduct loud underwater sound-blasting surveys in the heart of the last East African dugong stronghold.

Should Sasol strike it lucky, marine conservation groups fear that petroleum leaks could be devastating for dugongs, dolphins, whales and other animals.

This has spurred the world’s top marine mammal experts to sound the alarm and to declare a 16,280 km2 stretch of the Mozambique coastline as one of the world’s most important living spaces for dugongs and other marine mammals.

At a meeting in Barcelona on 9 December 2019, the Marine Mammal Protected Areas Task Force of the International Union for Conservation of Nature (IUCN) designated the area around Bazaruto as one of the world’s 37 new “Important Marine Mammal Areas” following a rigorous scientific peer-review process.

These areas, known as IMMAs, are classified as places that have the potential to be delineated and managed for conservation. According to the IUCN, this declaration is intended to act as a red flag, spotlighting important habitat for marine mammals which may lead to marine protected areas status, ship or noise directives, new marine spatial planning and other conservation measures.

Though these areas do not have legally-protected status, the IUCN suggests that their designation is “an important first step toward greater protection efforts”.

Erich Hoyt, co-chair of the IUCN taskforce on Marine Mammal Protected Areas said: “Marine mammals face enormous pressures across the globe with threats ranging from fishing to ship strikes and pollution. If we are to prevent species extinctions, it is vital that we address the threats where these species breed, feed and live.

Co-chair Giuseppe Notarbartolo di Sciara, who visited Mozambique recently to meet government officials and other groups, said: “There are fewer than 300 of these extraordinary creatures here, but, unlike elsewhere along the continent’s coast, this population of dugongs is at least still viable.”

The Bazaruto Archipelago to Inhambane Bay IMMA is also home to the endangered Indian Ocean humpback dolphin and 10 other whale and dolphin species.

Quite apart from oil exploration, illegal gill netting and poaching have created additional threats. The IUCN estimates that this dugong population can only sustain a maximum of two human-caused deaths of productive females per year before numbers crash.

Sasol was awarded offshore exploration and concession rights in 2005 for an area known as Block 16 and 19, later conducting extensive 3D seismic tests in deep-water sections of this block.

However, due to the environmental sensitivity of exploration in shallow-water sections adjacent to the Bazaruto National Park, exploration was suspended in 2008 until the Mozambican authorities published a Strategic Environmental Assessment.

This assessment has not been published yet and Sasol has renewed pressure on the government over recent months to allow it to conduct further seismic tests and drill exploration wells, right on the boundary of the officially-proclaimed Bazaruto National Park.

It has also appointed the Golder and Associates consultancy group to conduct a new scoping study and public consultation process.

Sasol spokesman Alex Anderson insists that: “There are currently no contractual exploration commitments in the licence and no immediate plans to conduct seismic or exploration activities.

“Sasol, as an environmentally conscious company, will do its best to protect the environment, including marine life, and minimise any potential environmental impact… Wherever we operate, we undertake exploration activities according to international best practice standards and in accordance with local laws, within the parameters set out by competent authorities and agencies, and engage in dialogue with stakeholders following locally determined norms, as well as recognised best practices.”

Opponents – who include several marine scientists, local homeowners, tourism lodges, fishers, cruise and diving operators – fear that explosive underwater seismic noise and drilling to depths of nearly 2km below the seabed will create unacceptable risks to the marine environment, and potential harm to the fisheries industry.

In their submission to Golder, a group of seven stakeholders said: “Sound waves generated during seismic surveys in the project area will produce intense noise that can result in a multitude of acute adverse biological impacts to marine life during the approximately four-month timeframe seismic surveying is expected to occur.”

They say seismic soundwaves of up to 260 decibels, which can travel over distances of tens to hundreds of kilometres, can induce permanent and temporary hearing loss in several species. Another concern is that the sound blasts will spook marine mammals, driving them away from vital feeding grounds for several months.

According to the IUCN task force report, herds of as many as 500 dugongs were evident off the coasts of Somali and Kenya in the late 1960s. As recently as 1996, there were sightings of herds of 80 dugongs at Manda Bay in Kenya, although the once common sightings off Tanzania soon became restricted to the area around Kilwa and the Rufiji Delta.

Further to the south, small herds of up to 10 dugongs were seen off Inhaca Island near Maputo in the 1970s, but marked declines were reported across the East African region from the 1990s onwards.

By the turn of the century, dugongs had all but disappeared from Maputo Bay and Dr Vic Cockcroft of the Centre for Dolphin Studies at Nelson Mandela Metropolitan University, reported that the Bazaruto region supported the last viable dugong population along the East African coast.

Ironically, perhaps, Sasol has been aware of the plight of the species for more than a decade, having sponsored a population assessment study of the Bazaruto dugongs from 2006 to 2008.

Following a meeting on 18 November 2019 at Dugong Lodge at Inhassoro, the IUCN task team reported that: “It should be noted that Sasol was once supportive of this population of dugongs, supporting substantial research, and they could be supportive again.”

Or, perhaps, not. DM

Links to the legend of the mermaids here and here.