The Planet, the Farmer and the madness of fighting a lost battle 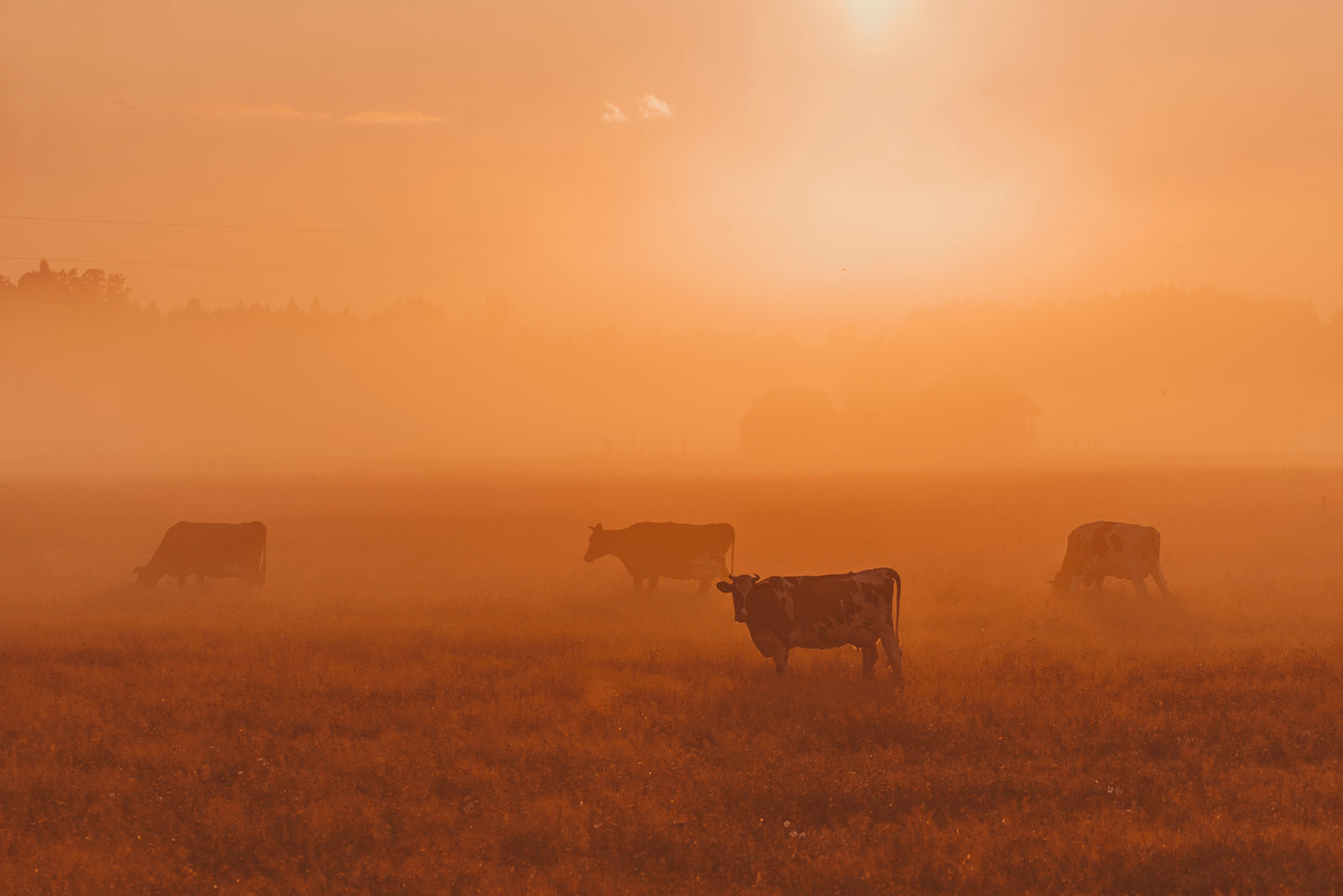 Photo by Anita Austvika on Unsplash

There are sheep and cattle farmers who are filthy rich, and others who fight every day from dawn till dusk to keep their flocks and herds alive. There are vegetarians, there are vegans, and there are vegan activists. They all have common ground: The Planet.

A sheep truck has just clanged to a halt outside my window. I first heard the rattle of its railings as it slowed, then the baa, baa, baa of sheep huddled in their metal transportation, possibly to the slaughter; we presume that they cannot know it, and are merely oblivious of their unknowable fate. That may not be the case, though I’m not going to ask my neighbour Johann, whose truck-for-hire it is, as I’d rather not know the beasts’ fate. For the guilty conscience, you understand.

I do get the irony that on a Friday morning I might see a bakkie rattling along the street and wince for the fate of the three woolly occupants at the back, then that night light a fire and braai some chops. As if the two things are unrelated – with luck the sheep is off for the shearing, you might hope, and anyway, those chops came from a packet in the supermarket fridge. The mind has a way of blocking out all the in-between bits. As it happens, shearing is done on the farm, then the wool is sorted to go for auction or sale, often to China (when they aren’t banning SA wool because of an outbreak in Limpopo or elsewhere very far from your Eastern Cape farm where your meat was raised). This will bring the farmer the annual wool cheque, on which much of the farm has to run for very long months.

Maybe the rattled sheep are headed for the abattoir. But they may just as well be being shipped to a farmer elsewhere who has bought them, there being a great need among the more hard-pressed to sell their stock or, more bluntly, as some of them put it candidly, to liquidate their assets. Or headed for auction, where their fate rests on the needs of whoever’s buying them – if they’re in luck, that’s a sheep farmer in a good rain area who can afford to fatten them up for the inevitable. But it’d be a reprieve at least. Or they could be en route to a feedlot, where sheep are fed a formula diet that may preclude their owner from naming their meat Karoo Lamb, if plans reach fruition to shackle farmers to a madly strict spider’s web of rules designed to ensure that the customer is sold proper Karoo lamb, and not merely the best lamb from the Karoo that the drought-embattled farmer can manage to produce. Again, the end result is the slaughter. That’s the lot of the embattled Karoo sheep farmer: shackled, and hobbled, by the need for rules, where good practice and commonsense ought to be enough.

I’m not saying vegan activists and climate activists don’t have a case – they absolutely do. The damage to the planet is set out sensibly in the following video by The Economist, which argues that if cows were a country, they’d be the third-largest emitter of greenhouses gases on the planet:

A lot of food, it is maintained, is wasted to feed animals which we then eat. Bear in mind where the word “husbandry” comes from. A sheep or cattle farmer’s business is to “put the ram to the ewes”, as the sheep farmer, or grazier in Australian parlance, might say, in order to create more animals to feed until maturity (yet more costly during times of drought, when the “free” grazing of the veld is not available, so has to be supplemented with very expensive bought feed). So a lot of effort and expense is gone to so that we have the lamb and mutton the market demands. And that global market is way beyond massive.

I do hear those people in their fancy city butcheries and others in academia who charge that it is just not good enough to finish a sheep off in a feedlot – where they’re fattened up with manufactured feed to please or appease the market, saving the original farmer a lot of money and probably enabling him to stay afloat – because the meat won’t be as “Karoo” as it “should” be. But it’s not as simple as that in the real life of the poor farmer fighting drought and debt. There’s a six-year-plus drought going on all around them. There’s nothing on the veld the beasts can eat. The rainclouds come and the rainclouds go, leaving no gift behind them. What the hell is the farmer supposed to do? Let the sheep starve until their gaunt carcasses are strewn all over the veld? If I were that sheep, please, send me to the feedlot.

Ah, the vegan might say, but we shouldn’t be farming them anyway. Because The Planet. And therein lies a massive and insulting presumption. I get that this must be hard reading if you’re a vegetarian or vegan. We’re from different planets, admitted. And the planet is key in this story. We all want to save it. Even meat-eaters use eco-friendly recyclable bags for their shopping and separate their bottles and plastic from their paper goods and leftover food. Yet suddenly we find ourselves the Enemy, the Culprit, spoken about as if we’re a Pariah, an Unconscionable, an Untransformable.

I watched this video in growing horror the other day:

This vegan activist’s ideology – that’s what it is – is more important to her than sharing food at table with her own father; even though she does not have to eat meat while he does. People who are not vegan are “people who eat dead animals” or “eat the body of an animal”. And vegan activists are on a mission to turn the entire planet into a vegans-only space. (Can you imagine?) Well, best you find us another planet then. Hardcore vegans – and I do imagine that there are plenty of vegans who are happy to eat their seitan, kale and meat-free “meat” at a table with the meat-eating people they love – are but a fraction of the world’s populace, despite the growth of the “movement”, and we know what happens when a minority takes control of a government, don’t we? Orwellian vistas come into view, and they’re ever grim and bleak.

At which the sheep farmer shakes his head, the way a wise older person shakes their head at something a younger person has a lot to say about before having lived the life that mellows you. Lived the reality and not the halcyon but impossible imagined scenario.

Spare a thought for those farmers, wherever sheep and cattle are farmed in the world, for all the workers in their employ, for the generations of farming inherited and which is the only life those farmers and their staff have ever known. What do they do in a world where the livelihood they are born to is falling away beneath their feet? They’re adrift, and how many of them can afford to spend the fortune it will take to find a new way of making a living – we’re talking millions of people who would be affected in the global sheep and cattle farming business. In the Eastern Cape, already the poorest and most drought-stricken of the nine South African provinces, the embattled provincial economy would be unlikely to recover. But never mind that: cattle farming is wrong, so it must be stopped! And to hell with all those who will have no livelihood, and to hell with the meat-eating old man at the dinner table.

There’s more irony. Bear in mind that farmers are among the first to verify that climate change is real – they know it through the generations of experience that have been passed down, often through centuries. Every farmer I know in my sheep farming community is deeply aware of this reality, and takes it personally.

In short: If there were a shortlist of the occupations of those who best understand climate change and wish to fight it, the animal farmer is undoubtedly high on the list.

The farmer in The Economist video changed his spots, totally. He leapt over the fence from a stock farm to one producing vegan “meat”. To many stock farmers this will be tantamount to sacrilege. Others will wish the guy well, and see the sense behind his decision to switch over – while perhaps wryly thinking, well, his real motive surely must be money/income. And can you imagine the Land Bank giving me that much money to establish such a mighty venture. And what if I take that massive risk and people still want to eat real meat? (You never know.) Bottom line: all farmers are in it to make a living. Even vegans have to do that. But the farmer in the Economist video is in the minority and he will remain in the minority. A planet full of meat producers and all they employ, and all the humans who are their market, is as likely to turn vegan, and turn to producing vegan products, as Donald Trump is likely to donate all his money to the American Pro-Choice Movement.

Vegan activists can campaign till the cows come home (sorry) for the farming of cattle to be halted, but it’s not going to happen. And because it’s not going to happen, the effort spent on fighting about the animal farming industry would be better spent on finding ways around the problems for the environment caused by the proliferation of cattle farming in particular. As for who eats what, whatever you choose to eat, that’s your indaba. And whatever I choose to eat is mine. And if you’re vegan and don’t want to sit at my table while I eat a chop, you’re welcome to stay home.

A cattle truck has just rattled past my window, which reminds me … excuse me while I pop into the kitchen to marinate those steaks for tonight’s braai. DM