The contrasting faces of Velddrif, where harders turn into bokkoms 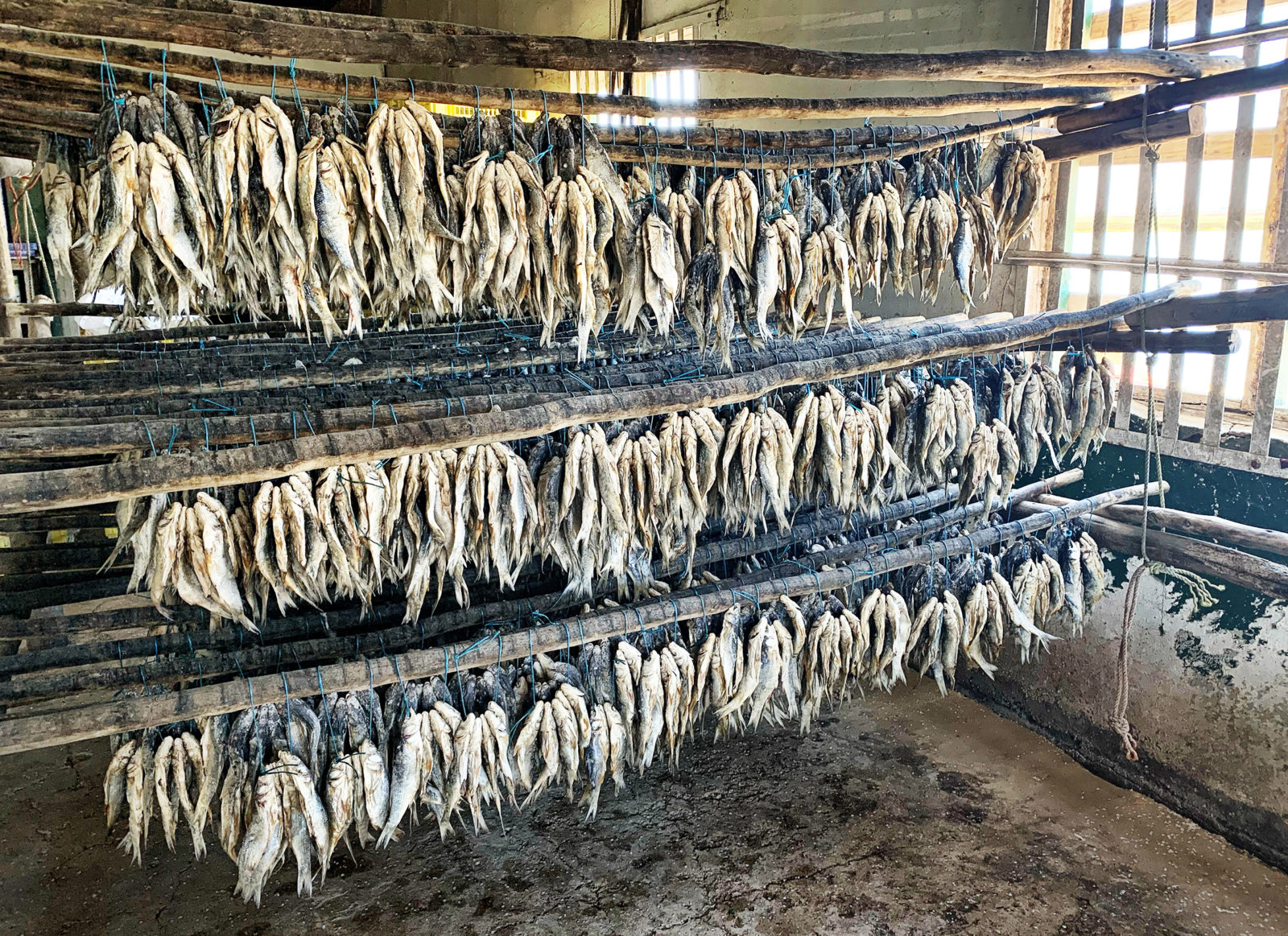 In Bokkomlaan, a 200-year-old fishing tradition continues, while at the Port Owen marina, modern craft gins and beers hold sway.

There are 12 vishuise, or fish houses, along Bokkomlaan in Velddrif, some of which are still used for their original purpose while others have been converted into places of business.

Columbine Coffee is owned and run by Rudolph Dante. His grandfather was a fisherman, and there is a picture of him (Granddad) hanging on the wall, standing tall and proud on the prow of a boat. There’s a strong sense of heritage along this stretch of gravel road which is not proclaimed.

Outside the smaller, block-shaped vishuise you’ll see locals working with their fish, as the harders (mullet) caught in the gill nets are transformed into the famous salty bokkoms.

It’s an entirely natural process, I learned at Die Vis Hoekie, which is owned by Johan and Saralize Tolken. Marvin Telly demonstrated how the fish are threaded onto a string, belly-to-belly, five a side, which happens after they’ve been rinsed of seaweed and sand, and packed in layers with local Khoisan salt, firmly weighted down. They’re then left to dry for 14 to 21 days. “It’s a summer process,” explains Felicity Strohveldt, who is the curator at the SA Fisheries Museum in the town.

In the olden days, when harders were fished in the Berg River from flat-bottomed rowing boats, bokkoms were eaten by farm labourers because they would replace the salt lost through perspiration while working in the fields under the blistering sun. Nowadays, fishing takes place in the ocean, but in the shallows close to St Helena Bay.

When I say bokkoms are salty, understand that means extremely salty. Like, probably the saltiest thing you can imagine eating. They also have a pungent aroma. These two characteristics make them not for everyone, but imagine, if you will, some nice chewy little fillets with a glass of chilled sweet or semi-sweet wine. Dried strips make an excellent snack with an icy beer, and the adventurous can incorporate them into creative recipes. Saralize has recently been pickling them, the vinegar adding a whole new flavour profile. Soaking them in water, then cooking over a fire, is another way to enjoy this typical West Coast delicacy.

On this trip to the region I learned there is Velddrif, Laaiplek, and Port Owen – which are all pretty much parts of the same place. At Port Owen, there is a yacht marina and three properties owned by one Russell Foster: the boutique hotel Russells On The Port, Charlie’s Brewhouse, and Poetic License gin distillery. Foster hails from England and the distillery and brewery are copied and pasted from his businesses over there – to borrow a term from Renaldo Fourie, who distills the four rather unusual gins with his wife, Wilhelmina. The recipes for the beers and the gins (and the blueprint for the still) were brought over and adapted to suit South African palates, regulations (like the Alcohol By Volume, which is 43% in SA vs 37% in the UK), ingredients, and a number of other factors to recreate as faithfully as possible the products under the same label overseas.

Renaldo and Wilhelmina built the distillery from the ground up, where the glistening and gleaming Amelia rules. Fun fact: stills are affectionately named after significant women, more often than not a family member; Amelia is Foster’s granddaughter and Charlie is his grandson.

The foundations were laid in April 2019, and the distillery opened to the public in October 2019. Visitors can take an educational tour to learn about the gin-making process before or after sampling the four gins in the range, or partaking of a cocktail or three.

The difference between infusion and maceration will determine the outcome; Poetic License uses the latter which ensures the bold flavours of the gins; infusions place the botanicals in the vapour path for only a short time, resulting in a subtle, milder flavour. Juniper is obviously the main ingredient in all the gins, but each of them has a unique twist.

The Northern Dry – a “traditional” London Dry style – is enhanced with Persian lime. Old Tom is sweeter than the Northern Dry, which comes from ageing on French oak up to three months. Fireside is Christmas in a bottle, spiced with cinnamon, cranberries, cloves, nutmeg and star anise.

My favourite is the Strawberries & Cream which is made with dried strawberries, hibiscus and rosehips during distillation, and an extra hit of fruity maceration afterwards.

When tasting, try if you can to take the first sip neat and unadulterated, before adding ice, tonic or other mixer, and garnishes. Who knows, you might be pleasantly surprised to find the Old Tom is fantastic just as it is or on the rocks. Strawberries & Cream is a delicate shade of rose gold and the cream of its name refers to the velvety mouthfeel. I’m planning to make summer cocktails with this and sparkling wine. There is no way that can’t succeed.

“It was developed as a ‘picnic gin’,” says Renaldo.

This is the thing with gin – we tend to think of it as a warm-weather tipple, and we’re not wrong. But enter Fireside, with its warm tones, and suddenly it becomes a winter drink. Try it warmed and mulled with extra spices, like gluhwein.

At the brewhouse next door, Anton Knoetze and Sheldon Lang have made a range of four craft beers, and have just introduced a fifth. On the tasting board from left to right are Sandveld, a lager; a very pale Blonde called Lighthouse; the meal in a glass Cormorant, a Bourbon stout; and the Harbour American Pale Ale. The new one is a Crystal Weiss, which is what you call a Weiss that has been filtered.

The Sandveld is, says Knoetze, the best-selling beer but it’s been tweaked slightly to accommodate the South African preference for slightly sweeter drinks.

“We brewed according to the recipes we got from Russell’s brewery in England. All four were too bitter for the South African palate. We changed them all, bringing the maltiness and the hoppiness closer together,” he explains.

The Cormorant was hands down my favourite, with its rich notes of chocolate and coffee, brought about by the magic of malt. “We use a dark roasted malt to bring out these delicious flavours. The smoky sweetness is from ageing in bourbon oak casks,” says Knoetze.

The brewhouse has a great menu of dishes that go down well with beer. A recommendation by someone who knows is always a good thing, so I ordered the honey glazed eisbein as per Knoetze’s suggestion. I was not disappointed. The giant ham hock is served with creamy mashed potatoes and tangy red cabbage, a classic combination. The succulent meat slid cleanly off the bone and no knife was required.

The size of the dish set the tone for the all-round culinary generosity experienced throughout the weekend. My base was Russells On The Port, in a suite with a large west-facing balcony overlooking the yacht marina. I ate at the restaurant there at sunset on the second evening and found the so-called starter-size Caesar salad not only to be liberally imbued with bacon, Parmesan and croutons but drenched in dressing. Some may disagree with this (like a real Italian would shudder at the amount of sauce on the pasta) but I’m a huge fan of lots, be it sauce, dressing, gravy, jus, coulis, all of it. Let it swim and bring me a spoon. The poached egg on top was just right and once I’d finished I was seriously questioning my main course order of lamb flatbread.

I thought about it over another glass of rosé and decided to go ahead. I’m glad I did; the base was thin and light and the topping plentiful – pulled lamb, cucumber and red onion salsa, mint yoghurt, and hummus. It did not go unnoticed that at the top of the pizza menu, defiantly, is ham and pineapple. Say what you like, I’m in the camp that says yes to this – salty and sweet, what’s not to love?

Breakfast at the hotel: The omelette with so much mozzarella it stretched as far as my hand with the fork could reach, topped with slices of bacon and a fanned avocado, cherry tomatoes and mustard mayo was good enough on the first day for me to have it again on the second.

In between all the eating and drinking, lying by the pool, and generally being lazy, you can do some shopping for those beers and gins to take home. Besides the full-size bottles, there are miniatures and nifty mini four-packs of the gin, and mixed packs of the beer too. I did a bit of festive stocking up so guess what you’re getting from me this year, Mom.

The region is rich in birdlife as well, and on a leisurely boat trip with Oom Tollie (yes, really) and his brother-in-law Andry (who also does fishing charters) I learned there are greater and lesser flamingoes.

My life is complete (for now). DM

Bianca Coleman’s visit to Velddrif was sponsored by Russells on the Port.