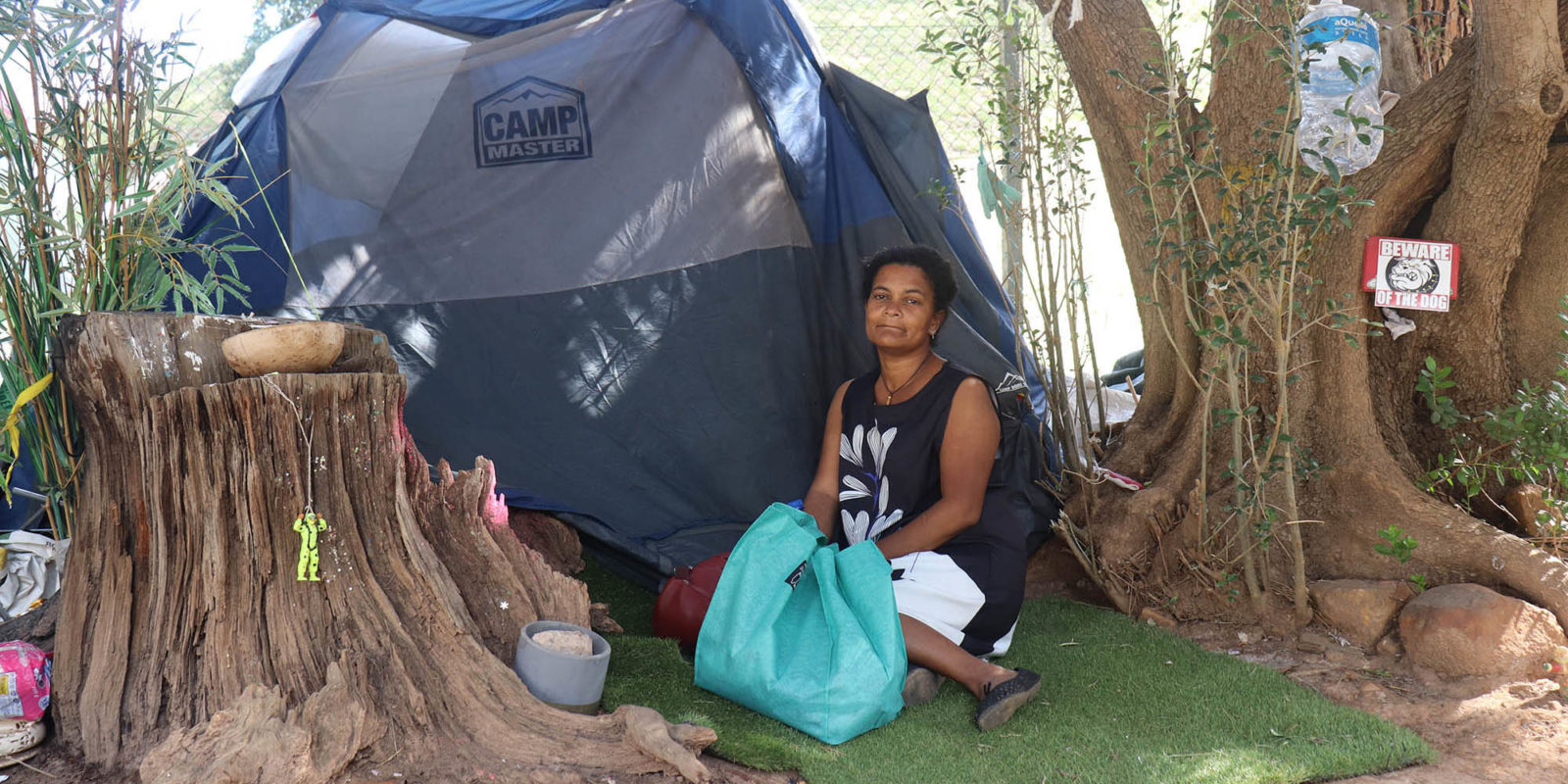 Carin Gelderbloem is one of seven street dwellers who have taken the City of Cape Town to court over ‘homeless fines’. (Photo: Sandisiwe Shoba)

As lawyers battle it out at the Cape Town High Court over ‘homeless fines’, little has been said about the courageous street dweller at the heart of it all, who feels that living on the street and ill-treatment by the City has stripped her of her dignity – which she’s fighting to reclaim.

Carin Gelderbloem has been homeless for close to nine years. After being moved from place to place, she’s settled in a small corner of a Cape Town park. Two tents have been set up for shelter, housing her and a few friends who have now become family.

She’s quite particular about her home, refusing to allow Daily Maverick inside her “messy” tent. Near the entrance, a few pot plants and ornaments make up the small garden area. Plush toys hang as Christmas decorations on a nearby tree.

“Before I’m a homeless person, I’m a human being,” said Gelderbloem.

She is one of seven street dwellers who have hauled the City of Cape Town to court over street fines and the confiscation of personal property.

The litigants are challenging the City’s public spaces and waste management by-laws.

The legal action follows a public outcry after news broke in June 2019 that the City was issuing fines to the homeless for various offences such as erecting structures on walkways, lighting fires, or making excessive noise.

Gelderbloem was no exception. In April 2019, she received a R500 fine for littering and dumping after erecting a structure near a bowling club in town. She was due for a court appearance in June.

“I couldn’t go to court because I hurt my wrist and was in hospital. When I came back [from the hospital] some of my things were gone.”

She was told City of Cape Town law enforcement officers had taken her possessions, including the fine she had been issued.

The 49-year-old who earned a living by selling beaded wares on Greenmarket Square, also had her stock confiscated as well as her ID and bottom dentures.

The events took place during the heart of Cape Town’s harsh winter. She recounted a similar tale in her founding affidavit, where she says law enforcement personnel returned a few days later to demolish the rest of the structures in the area.

When she protested, she was told she had “no rights” as a homeless person and was left with nothing but a single set of clothing which she wore for close to a month. With her beaded wares taken, she also had no means of earning an income.

“How can you tell a person they don’t have rights?” asked Gelderbloem.

For her, sleeping rough was hard enough, but tense interactions with law enforcement and Central City Improvement District (CCID) officials made street life even tougher.

“They verbally abuse you,” she claims. “They say you must f*** off home, you’re dirty, you want to sponge off people.”

Her gripe with law enforcement is not a unique one. Daily Maverick has previously reported on complaints by street people that officers have harassed, beaten or even sexually abused them.

Gelderbloem opened the case against the City in August after being approached by Dingley Marshall attorney Lucien Lewin. She and six others sought an interim interdict against the City of Cape Town preventing them from issuing fines and confiscating street dwellers’ property.

The matter was heard in the High Court in September where the City agreed to suspend enforcing the by-law against the applicants pending the next court appearance in December.

In her filing affidavit for the contempt motion, Gelderbloem claimed the City violated the order when her bedding and clothing were confiscated by Green Point and Oranjekloof City Improvement District personnel in mid-September.

The motion was later withdrawn.

She says her life has been endangered since the litigation was launched.

“I used to live in the Company Gardens, but I can’t stay there any more because the CCID harassed me.”

She fears that if her current whereabouts are revealed, she will be targeted again.

In its court papers, the City claims that it does not “presently” remove homeless people’s belongings as it does not have the facilities to store them. The by-law, however, does allow for possessions to be removed on a temporary basis.

At the height of the media frenzy regarding homeless fines, Smith had told Daily Maverick that law enforcement staff are expected to “adhere to a strict code of conduct” which includes treating every person with “dignity”.

Although the City has put in place interventions to assist the homeless, such as shelter facilities and the Safe Space under Culemborg bridge, Gelderbloem refuses to stay at a shelter after experiencing sexual abuse at a well-known homeless organisation in the City.

“I went into the shelter cracked and I came out shattered.”

She claimed one of the night supervisors was the culprit of the abuse.

“I told the social worker and she didn’t do anything.”

She was permanently scarred by the incident and despite the hardships she’s faced on the street, Gelderbloem feels that shelters are too unsafe to return to.

Nonetheless, she misses “the little” things about having a roof over her head, like the luxury of taking a bath, or brushing her hair. She even struggles to afford toiletries, and at times water for drinking or bathing is scarce. Food is also hard to come by.

“It’s not nice not knowing where your next meal is going to come from.”

Ultimately, Gelderbloem hopes the homeless will finally be afforded the dignity they deserve.

“I want our justice system to acknowledge that although we’re homeless, we’re not helpless.” DM

Regulation 11 should prevent promotion of quack Covid-19 treatments, but does it?

Time is on our side in the battle against Covid-19

Fighting Covid-19: Will SA’s lockdown work (and what does that mean)?