The Association for Monitoring and Advocacy of Government Pensions is a non-profit set up to help protect the pension benefits of members of the Government Employees Pension Fund. Members, who are retired professionals, are concerned about the sustainability of the GEPF.

Public sector employees can rest assured that despite the shenanigans at the Public Investment Commission, which manages the bulk of their pension fund, their assets are in relatively good shape. But, by all indications, they should not assume that this will remain the case.

Fund chair Dr Renosi Mokate noted in the recently published annual report that despite the tough economic conditions, the fund had a return of 2.6% or R46-billion during the 2018/9 financial year. This is 69.5% lower than the R106-billion earned in the previous financial year.

This return was off the back of an investment portfolio that grew by R17-billion to R1.82-trillion. While the numbers seem huge, it’s worth remembering that in the previous financial year the portfolio grew by R138-billion.

Mokate said while many pension funds and investors had seen negative growth in their portfolios during the past financial year, the GEPF has seen an increase, albeit marginal, in its investment growth.

The fund is generating good returns over the long term, wrote Abel Sithole, principal officer of the GEPF. The annualised five- and 10-year returns were 7.0% and 11.6% respectively at 31 March 2019. These were largely driven by the performance of the local equity and bond markets, which were favourable over the period.

However, there are some worrying signs that this performance may not be sustained or sufficient. 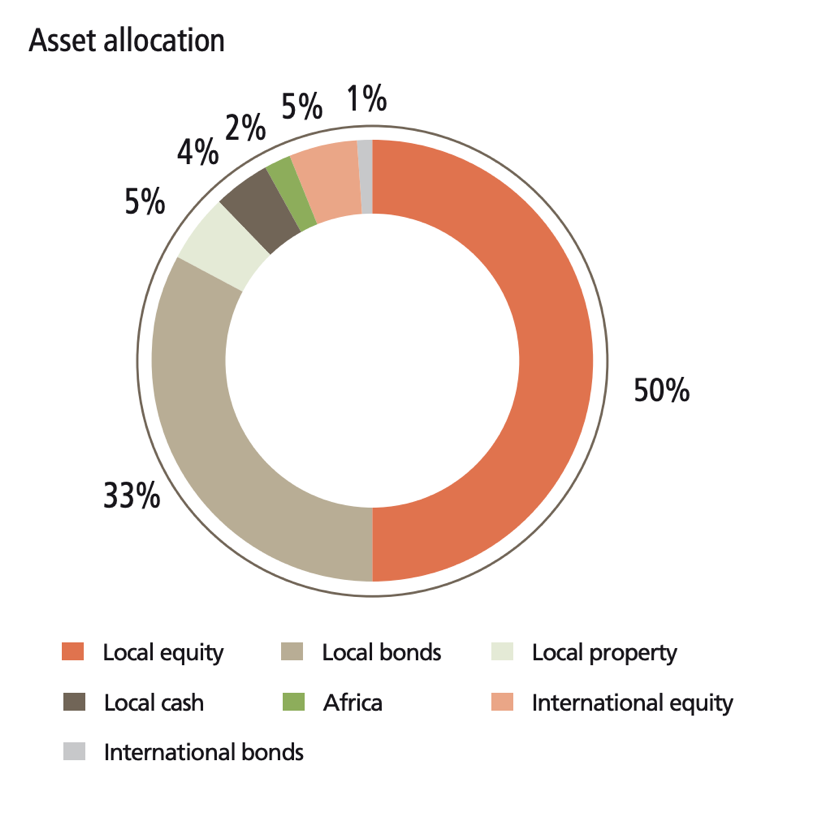 One concern is the GEPF’s asset allocation.

“The financial results do, however, highlight that the performance of the fund is not isolated from the country’s economic and development constraints. If the GEPF is to address this dependence, it has to seriously consider increasing its offshore investments, which is currently under review,” Sithole said in the annual report.

“The trustees have correctly identified that asset allocation needs to be adjusted for changing circumstances, but there appears to be no urgency to act decisively on this,” says Christo van Dyk, a retired auditor who provides support to an organisation known as the Association for Monitoring and Advocacy of Government Pensions (AMAGP).

“Increasing the offshore investments has been on the cards for almost two years now. It appears the delay is with the minister of finance or Treasury. It’s uncertain what the hold-up is because the trustees, after all, are regarded as independent and are ultimately the executive authority for the fund.”

Fund valuator Anton Pienaar notes in the annual report that there is a fund shortfall and says the required employer contribution rate should be between 14.4% and 18.9% of pensionable salary (depending on the benefit structure of members).

For the time being, “the shortfall in the required contribution rate can be afforded from the excess of the assets over the best-estimate liabilities,” he notes.

However, auditors for the GEPF, Deloitte & Touche, listed contributions as a key audit matter – in other words, a concern that needs to be watched. In the last financial year, the fund collected R75.6-billion from members. It paid out R93.6-billion to its members, leaving an operating shortfall of R19.6-billion once expenses were added in.

Pensioners have not suffered, as the fund has continued to grant increases of 100% of CPI. However, this is not guaranteed and should returns on investments remain low and the specific reserve diminish further, the leeway that the trustees have will be gone.

This shortfall has been in existence since 2014 and is not sustainable for the simple reason that new investments have not been made to a level that will ensure improved funding levels and a gradual build-up of the recommended reserves.

“What we are seeing is the exact opposite,” says Van Dyk.

This also affects the long-term funding rate of the fund. This is the ability of the fund to be able to pay pensioners and their dependants – particularly as the fund matures and the number of pensioners vs active members tilts in favour of pensioners. Because the fund is a defined benefit fund rather than a defined contribution fund, the responsibility to meet payments lies with the fund, rather than the member.

If the fund cannot meet these obligations, the South African taxpayer will have to cough up.

“For as long as this continues, the funding rate will drop until it hits 100%, and from there to 90%,” says Van Dyk. “Obviously, while this is happening, there is zero chance of building up reserves and with it, the secondary objective regarding the long-term funding level, will remain a pipe dream.”

An actuarial valuation of the GEPF is conducted at least once every three years, the last being done by Alexander Forbes. It shows that as of March 31, 2018, the funding rate was 108%, which means that assets cover liabilities, providing a buffer through years when the yield is negative. In total, the fund has assets of R1.8-trillion and liabilities of R1.7-trillion.

“For many, this would be acceptable,” says Van Dyk, “however, the trend is downwards. In 2014, the funding rate was 121%. If the fund was to face another hiccup like it did in 2008 the funding rate will fall below 100%, and the fund will be irreparably damaged.”

The GEPF downplays these concerns.

“The GEPF’s investment strategy and asset allocation are long term in nature and are designed using an extensive asset-liability modelling exercise which takes into consideration the long-term liabilities of the fund and expected market returns,” a spokesperson told Business Maverick. As such, the GEPF sees no need to ask the employer to increase contributions.

With regard to increasing its exposure to international equities, “the GEPF is engaging the relevant parties on the matter”.

Van Dyk believes these answers avoid the issues. “The trustees should act in the interest of pensioners. While transparency is improving, there are many issues that are alarming. We are not trying to panic anyone, but engage with issues in a constructive fashion.”

Adamus Stemmet, a spokesperson for the AMAGP, adds that its members are concerned that the trustees of the GEPF have not been called upon to present their annual report to the Standing Committee on Finance for the second year in a row.

“Evidence given at the Mpati Commission clearly pointed to an unhealthy situation regarding the Government Employees Pension Fund. We believe the GEPF needs to exercise more oversight of the PIC and its investment decisions, and regardless of what the board of trustees says, this is not happening.” BM