Should you be drinking kombucha? 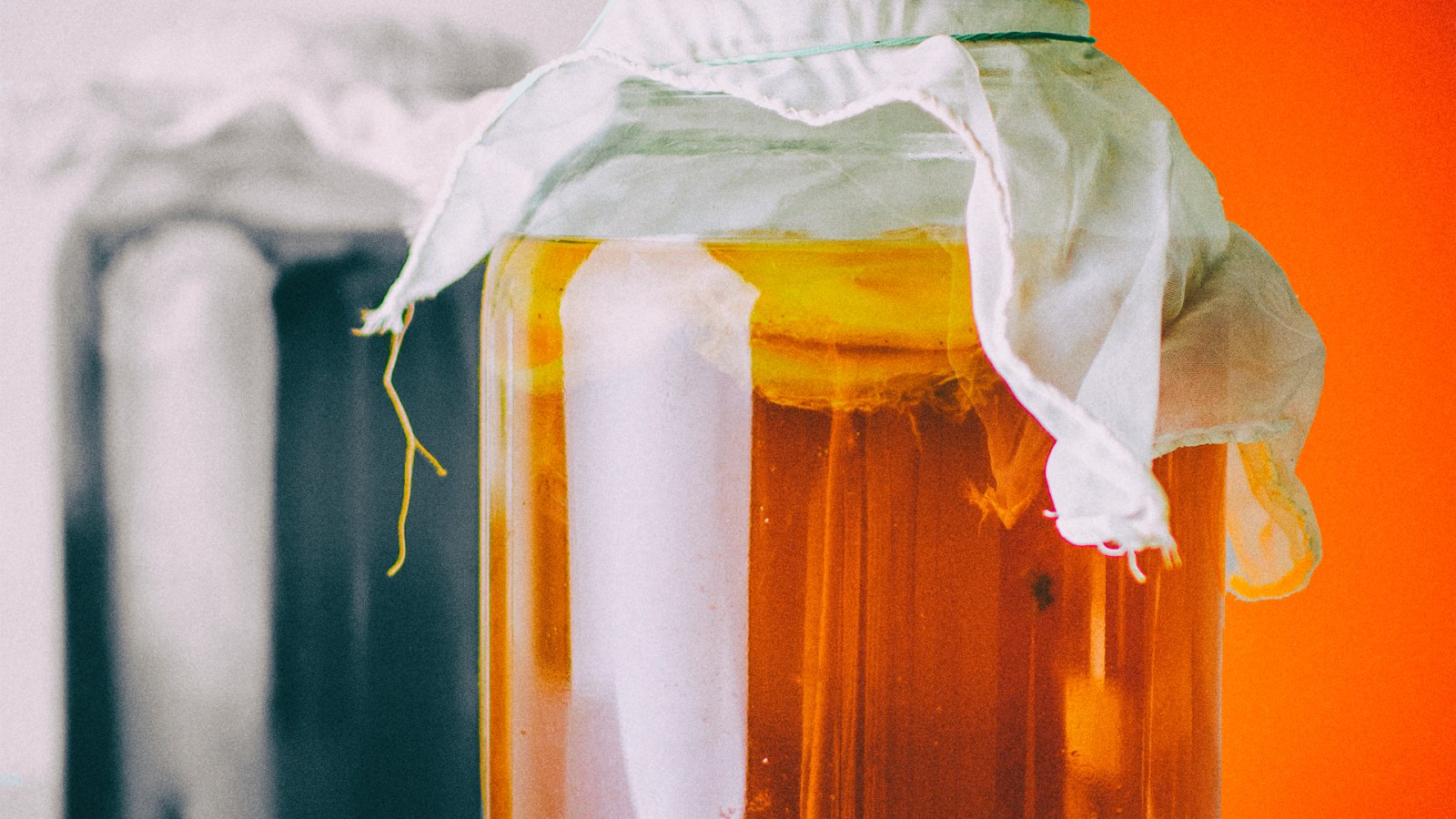 Said to aid digestion, improve gut health and act as a source of probiotics, kombucha has made a name for itself in the wellness industry, but is the fermented tea all it’s made out to be?

If you’ve recently walked through the health section of your local supermarket, you might have noticed “kombucha” displayed on shelves. Whereas the wellness beverage was originally only available at designated health food shops, its recent rise in popularity has seen it enter commercial stores like Spar, Pick n Pay and Checkers. Today, many locally-produced kombucha brands including Zooka, Theonista, Happy Culture and Brew Kombucha, are widely available. In fact, according to a report published in March 2018 by independent market research company Euromonitor, kombucha is one of the fastest-growing segments of the soft drinks industry, appealing to consumers’ growing desire for healthy, functional soft drink alternatives.

For Matthew Healey, co-founder of the local company Zooka, the growing market appeal for kombucha in South Africa has been evident in the sales growth.

“Our monthly sales have increased by an average of 90% from 2018. However, the demand is higher than those numbers suggest as our sales have been at times limited by our production capacity. Every bottle [of kombucha] we produce is sold.”

From improved digestion and liver function to increased immunity and metabolism, the claimed benefits of kombucha – a fermented drink with natural probiotics – have been attributed as one of the reasons for the brewed tea’s growing demand.

“Over the last few years the general public has become increasingly aware of the concepts of probiotics and how the health of your gut is linked to general health and immune function,” explains Cape Town-based registered clinical dietician Jessica Kotlowitz. She says this increasing awareness has led to the growing popularity of fermented foods and beverages.

Despite the wellness claims, there may be other factors to consider – sugar content, brewing process and certain gut conditions – before turning to kombucha in the hopes of self-help health improvement.

Kombucha is a fermented tea beverage made with tea, sugar, water, bacteria and yeast. Although the drink only became popular recently, the origins of kombucha are believed to date back to around 220BC in northeast China. The mother culture, also called SCOBY – symbiotic colony of bacteria and yeast – is what makes kombucha possible and each new batch that is brewed will need the SCOBY to kickstart the fermentation process.

“The mother culture is the combination of bacteria and yeast which are used to ferment the sugar in the kombucha,” explains Kotlowitz.

The SCOBY is a naturally occurring part of the brewing process and can either be made from scratch by letting a bottle of kombucha ferment for about a month or can be bought at selected health stores. Each time a new batch of kombucha is brewed, a new SCOBY will grow on top of the original. The more kombucha you make, the larger the SCOBY grows.

It is during the fermentation process that the bacteria and yeast from the mother culture change the sugars in the tea to acids and alcohol. Kotlowitz explains that commercial kombucha contains less than 0.5% alcohol and is, therefore, considered alcohol-free. “Home-brewed kombuchas can have much higher alcohol levels,” she adds.

With a slightly sweet, slightly acidic taste, similar to that of apple cider vinegar, original kombucha is not everyone’s cup of tea. Today, however, in the hopes of appealing to a wider consumer base, many commercial brands have brought out flavoured versions of the fizzy fermented drink where herbs or fruits have been added during the brewing process.

How is it made?

Although each batch of kombucha is made using the same core ingredients, there are a few variations available on the market, depending on the company or, if home-brewed, personal preferences. In some cases, as for Brew Kombucha, a base of black or green tea or even rooibos tea is used. Once the tea, sugar, water and SCOBY are combined, the mixture undergoes fermentation for between one and three weeks.

“Our primary fermentation period is [around] two weeks,” explains Healey. “The bottles then go through a secondary fermentation (carbonation) period for between 4-7 days.”

The longer the fermentation, the fizzier the brew becomes. The beverage is then separated from the SCOBY, bottled and refrigerated to slow down the fermentation process.

Adam Vanni, co-founder of Europe’s first kombucha tap room, JARR Kombucha Bar in London, said in an interview with Oddrop podcast that originally kombucha was brewed with camellia sinensis, the caffeinated tea plant used to make most traditional black, white, oolong and green teas. Vanni also recommends using organic sugar as the more minerals the sugar contains, the harder it is for the SCOBY to digest and for the fermentation process to take place.

“The sugar is basically the fuel for the fermentation and most of it is consumed throughout the process.”

When it comes to apparatus, he suggests using either a glass or stainless-steel jar.

“You would not want to brew in plastic or ceramic as it can leach chemicals. You need a small cloth and a rubber band to go on top to ensure airflow and not close it off completely and you need starter liquid from a previous batch or a SCOBY.”

While you have more control over ingredients’ selection when brewing at home, the conditions might not always be completely sterile; watch out for batch contamination and the growth of bad bacteria in the kombucha brew.

Is it good for you?

As with other foods that go through a natural fermentation process (kefir, yoghurt, kimchi and sauerkraut) kombucha contains natural probiotics that may lead to improved gut health, immunity, energy and digestion. Kotlowitz says that, theoretically, drinking a beverage that contains such organisms could help treat certain gut disorders which are related to a loss of healthy gut flora or an imbalance in certain healthy gut flora. However, this would differ on a case to case basis.

Kotlowitz adds that drinking kombucha is not recommended for people who suffer from an overgrowth of gut bacteria in the small intestine.

As kombucha is brewed from tea, it contains natural antioxidants such as polyphenols and catechins, which help prevent cell damage, as well as amino acids that could help boost the immune system.

Despite the various wellness claims of kombucha, according to an article in Time magazine there is “not enough scientific evidence yet to support most of them”. In the article, professor of medicine and director of UCLA’s Centre for Human Nutrition, Dr Zhaoping Li, asserts that many of the health claims related to kombucha come as a result of people extrapolating study findings related to the human microbiome or the nutritional benefits of tea.

In addition, the microbes in kombucha beverages are hard to control, says Kotlowitz. Depending on the production method, the mother culture used, and the hygiene principles followed, it is possible for bad bacteria to enter a batch of kombucha.

“There have been some reports of foodborne illness caused by kombucha consumption and since kombucha is not pasteurised, the possibility of contamination with bad bacteria always exists. For this reason, kombucha is not recommended for people who are immune-compromised, pregnant women, young children or the elderly.”

Kotlowitz adds that the suggested benefits of drinking kombucha depend on both the type and amount of healthy microbes in the kombucha brew. Although this can be determined when the culture is bottled, it can change due to factors such as storage temperature and how long the product has been on the shelf.

“The possible benefits of kombucha need to be weighed up against the sugar and calorie content and the possibility of food-borne illness,” she says. The nutritional levels of kombucha will differ depending on the brand and brew. Healey reports that there is less than 4g of sugar per 100ml of Zooka kombucha brew; less than half of original Coca-Cola, which has around 10.6g per 100ml. In some cases, cane sugar or fruit juice might be added in order to make the taste more appealing.

While the health claims of kombucha have not been scientifically proven, if you’re looking for a healthier alternative to sugary beverages, the brewed tea may be an appealing option. ML