Senatla out to impress Powell in season swansong 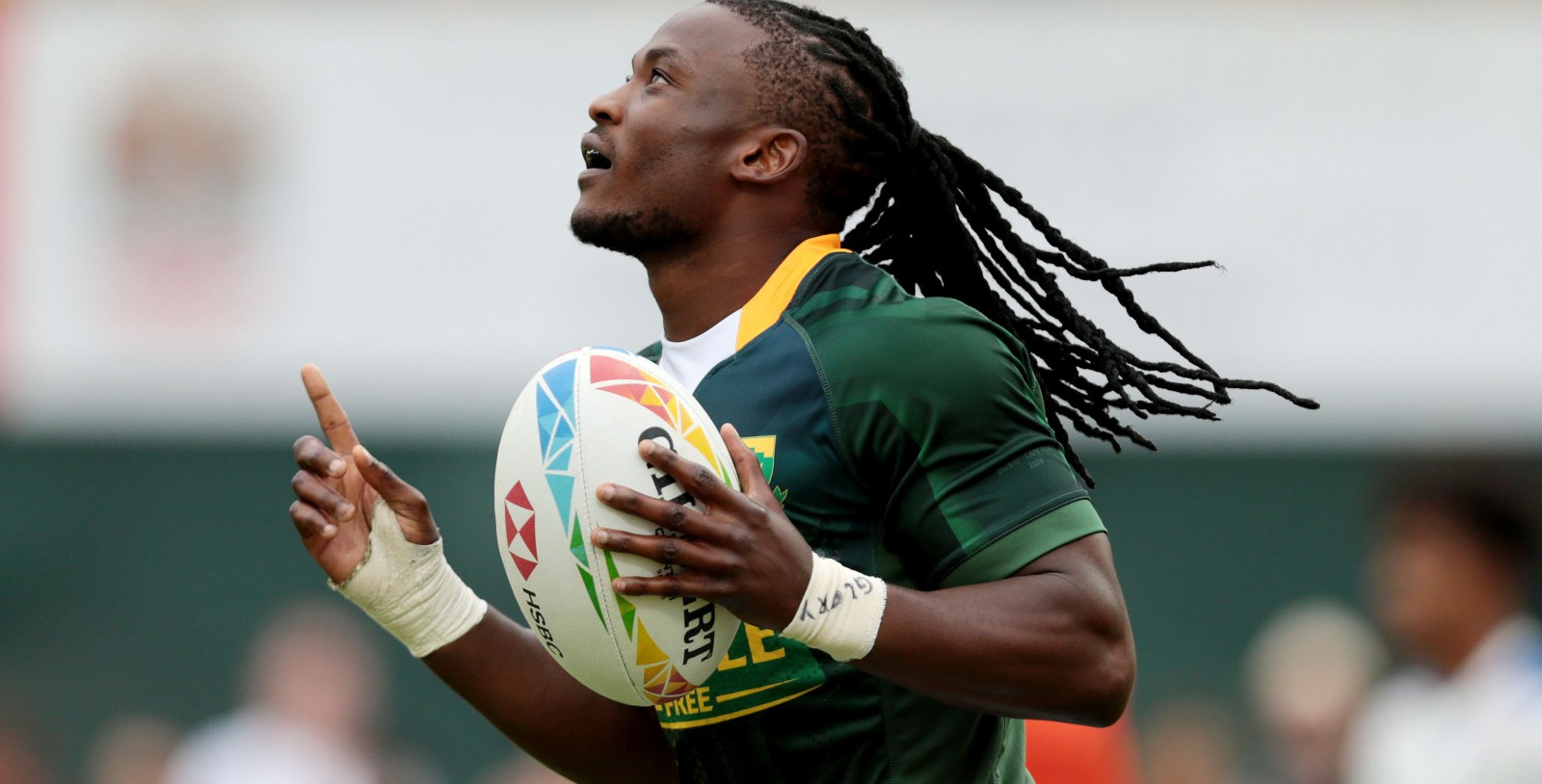 Seabelo Senatla of South Africa celebrates after scoring a try during the Cup Semifinal match between South Africa and Samoa on Day Three of the the HSBC World Rugby Sevens Series - Dubai at The Sevens Stadium on December 07, 2019 in Dubai, United Arab Emirates. (Photo by Christopher Pike/Getty Images)

The 26-year-old Senatla returns to the Stormers Super Rugby camp next week where he aims to pursue his goal of becoming a fifteens Springbok.

So, he has to take his chance in Green Point this weekend to remind Powell of his value. Senatla still aims to be included in the Blitzboks’ Olympic Games squad for Tokyo in August 2020.

By missing eight of the 10 World Series tournaments through Stormers commitments though, he is playing a dangerous selection game – especially if someone else in the Blitzbok squad emerges through the course of the season.

Senatla is not the only player in his last World Series tournament of the campaign either. Ruhan Nel, Dylan Sage and the wonderfully in-form Rosko Specman are also returning to their Super Rugby franchises next week.

Specman was sensational in Dubai last week, as the Blitzboks swept to the title and he, Senatla, and the rest will have to be in peak form from the outset in Cape Town.

South Africa has been drawn in the Pool of Death, which features reigning World Series champions Fiji and last year’s Series’ runners-up the US.

Fiji ended ninth in Dubai – their worst return in the 20-year history of the World Series – which is why they are paired with South Africa and the US. They were unseeded for Cape Town as a result of the Dubai debacle.

Senatla will certainly need to add to his 227 World Series tries this weekend before any thoughts turn to fifteens if the Blitzboks are to escape their Pool, which also features the unpredictable Japan.

“I’ve only got these two tournaments (Dubai and Cape Town) to put my stake in the ground and show the coach I’ve still got it,” Senatla said on the Maverick Sports podcast last week.

“It’s going to be a fight for that Olympic place. The younger guys are really pushing.”

After years of straddling the two codes with only moderate success in the longer version of the game, Senatla has revised his approach to his physiology when it comes to fifteens.

For the last four years, when he has ended his sevens commitments, he has spent weeks and months in the gym trying to gain three or four kilogrammes in muscle to become “stronger” and more robust for fifteens.

It’s an approach that has not seen him perform at the same high level he does in sevens and Senatla thinks he knows why. It’s because mentally the extra weight makes him feel slow and sluggish. Even if he isn’t by the standards of normal human beings, in his mind he is not the same athlete and once doubts creep in, then mentally the spiral is downward.

“When I return to fifteens I’m not going to try and pick up weight,” Senatla said. “I’ve tried that recipe doesn’t really work for me.

“I just feel slow and heavy, and even though I might be quick to other people, I don’t feel quick and that messes up my confidence. I have to be comfortable moving this body around.

“Right now I’m confident – I feel explosive, strong and fast. That’s how you should feel as an athlete and I do. If I put on a few kilos I don’t feel that confident. It’s all a huge mental thing.

“But losing that extra weight allows you to move efficiently. You feel explosive enough, powerful enough and more agile and that’s when it makes a difference. You can really feel those few kilos.

“For me it’s all about being explosive and quick, which is what sets me apart from other players, which is something I have to keep.

“Some people say to me: ‘but you’re not strong enough’ if you don’t add the extra weight but I feel strong at 82kg. I don’t lose any strength (compared to being 85 or 86kg).

“Strength to weight ratio is much more important than your weight. Look at Cheslin Kolbe as an example. The way he enters tackles is all about attitude, and about how strong and confident you feel.”

For Sage, it’s also his final outing for the Blitzboks before a return to Loftus for Bulls Super Rugby duty, and he is relishing the chance to perform in Cape Town.

“The bodies are sore after Dubai and the long flight home but being welcomed at the airport like we were with a band playing and fans waiting, and then having a good night’s rest at home is more than enough to perk you up again,” Sage said.

“We have closed the door on Dubai and will start the week fresh. New challenges await in Cape Town. We have a tough pool and the teams will be coming for us, so will have to be ready for that.”

Fellow forward Ryan Oosthuizen, concurred with Sage: “It is great to be back at home. The people at the airport were clearly excited to share the win in Dubai with us and we appreciate that.

“We really enjoy the support from the people back home and playing in Cape Town is a great, because we can return the compliment. You need to be able to switch off and on again in the World Series. The Dubai event is gone, we did well and are happy about our performance, but now everyone starts at scratch again,” he said. DM