Give us our birthright, undocumented children tell Home Affairs 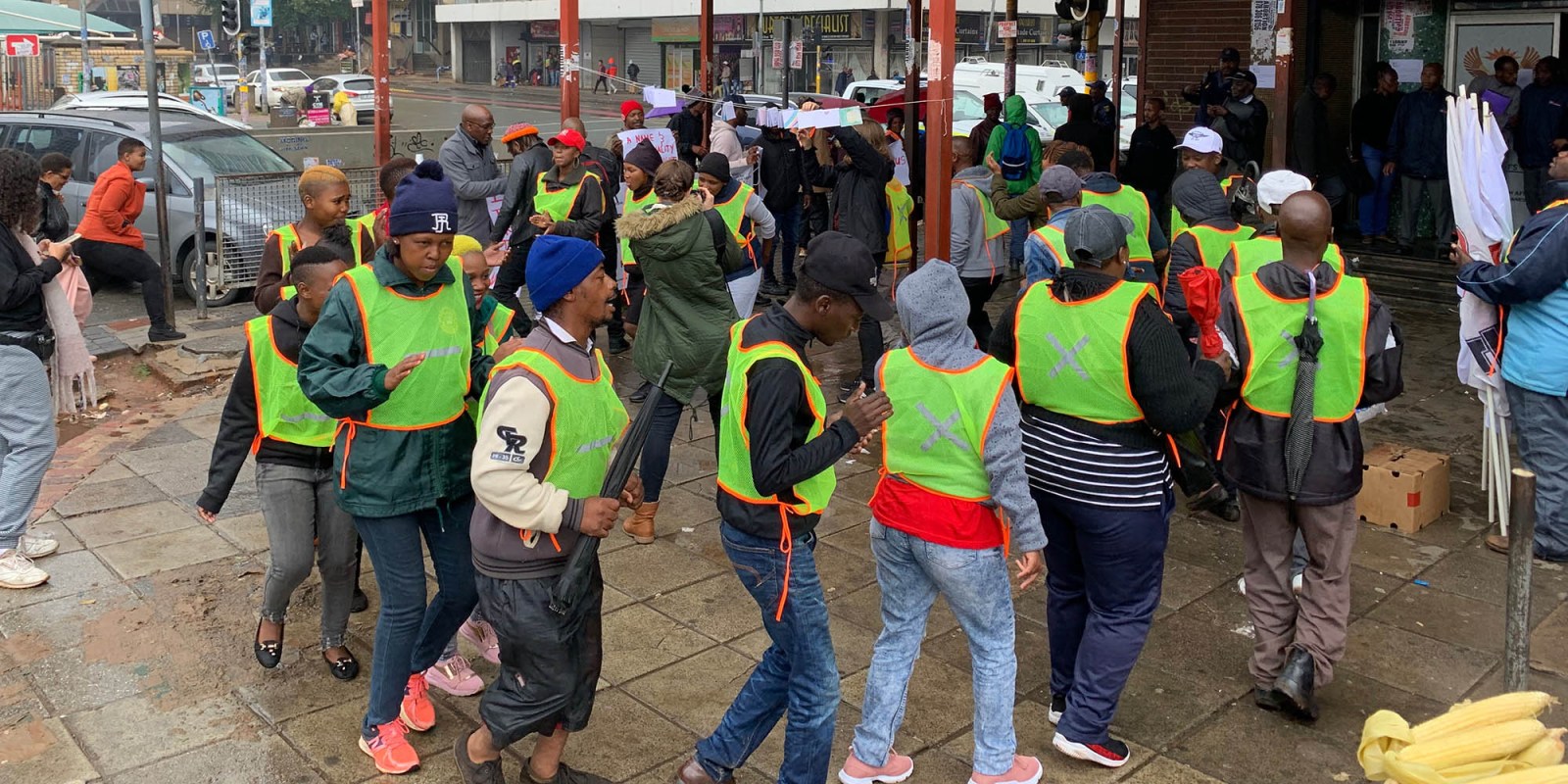 ‘We want our identity documents’ – the Civil Society Organisations collective commemorated Human Rights Day and International Migrants Day by displaying children’s handmade ‘identity books’ and ‘passports’ outside Home Affairs in support of the campaign #DocumentUs and the rights of undocumented children.

A colourful group of demonstrators braved the Johannesburg weather on Tuesday 10 December 2019 as they gathered outside the Department of Home Affairs (DHA) to raise their collective voices about the injustices faced by undocumented children in South Africa.

The group danced amid colourful “identity books” and “passports”, constructed by children and displayed on strings tied between the pillars outside the department’s entrance.

“These are not just papers. These children are saying: ‘these are the documents that I am longing to have so that when I am in school, I am like every other child’,” said Thifulufheli Sinthumule, director of the Consortium for Refugees and Migrants in South Africa (CoRMSA).

The department is responsible for the registration of births in South Africa and the issuing of birth certificates, but restrictive policies are preventing hundreds of children from being granted their constitutional right to birth registration and nationality.

“The reason we are gathered here is because of the challenges experienced by children in accessing birth certificates,” said Sinthumule, “[It is these] documents that give children access to basic services such as education, healthcare and shelter.

“Including the right to a name, because if you don’t have a document, where will your name be written?” he asked.

The gathering, orchestrated by CoRMSA in partnership with the Civil Society Organisations (CSO) collective, took place on Tuesday to commemorate Human Rights Day as well as International Migrants Day on 18 December.

“The gathering will be used to bring awareness to the basic rights as stipulated in the constitution as well as the international conventions that South Africa is signatory to, which concern the right to a name, nationality and birth registration,” said Abigail Dawson, communications and media officer at CoRMSA.

She explained that much of the public considers these secondary rights to be the right to food and shelter, for example, but this is only because “we do not comprehend the implications of what it means to be undocumented”.

“Being undocumented is often the foundational issue around other rights,” said Dawson, describing how an undocumented child may be excluded from access to healthcare, education and the right to access social services such as social grants and child protection.

“Without these documents, children are essentially not recognised by the state,” says CoRMSA’s memorandum, which was read to the crowd by two teenagers from Johannesburg Child Welfare, before being formally handed over to officials of the department.

The memorandum sets out a list of the demands from the collective to the department, which includes a demand for the department to repeal its requirement for a DNA test, or at least to negotiate that it subsidises the cost.

“For a father to claim paternity, he is required to take a DNA test which costs roughly R1,500,” said Dawson.

“A typical case study for CoRMSA is an undocumented non-national mother and a South African father. If he claims paternity he is obliged by the state to take a DNA test, which a large percentage of the population simply cannot afford.”

The department requires both parents be identified for a child to be issued a South African birth certificate and until there is a conclusive paternity test, this child will remain undocumented.

There are currently thousands of children without birth certificates. According to the Department of Education, there are 998,433 undocumented children enrolled in public schools and of these children, the majority (880,968) are South African citizens.

The memorandum also demands an increase in birth registration facilities within healthcare centres.

“Only a few healthcare centres have internal DHA facilities so those children that are born outside of these centres or in rural clinics are faced with the issues of the distance and cost of being registered,” said Dawson.

The department also requires that you complete this registration within 30 days, after which the parent or guardian is subject to a fine.

Some other demands are that the department extends its operating hours to Saturdays and employs and trains more personnel to facilitate faster processing and manage their rising administrative backlog.

The crux, however, is for the department to do its job:

“As a collective, CSO, working with children, refugees, asylum seekers and migrants in South Africa, we demand that the DHA speedily implements its mandate to grant access to documentation to all eligible people [and] recognise the various vulnerabilities and exclusions undocumented children face in not being documented,” reads the memorandum.

“We have the Constitution and we have the Children’s Act and the Child Justice Act – we have all these laws that collaboratively say that we will make provision for children to be protected,” said Sinthumule, addressing the crowd.

“But when you look at what is happening on the ground, this is not happening.”

“We are saying to the DHA, these are not just papers. These children are not asking for much, they are asking to be accommodated and accepted like every other child in South Africa,” he said.

“Many of these issues around registration have already been raised in stakeholder meetings with the DHA, but [the gathering] is showing our seriousness,” said Dawson. “We are going to take this to the streets.”

She explained that Tuesday’s gathering will form part of a broader campaign that will see children continuing to create documents that will be displayed during 2020 to maintain the visual sense of the scale of this issue.

And it is true that browsing these imaginative and individual “official” documents has a profound and very real effect.

“The children have made documents that they wish they or their friends had… We can talk about the statistics, but this really gives us a visual representation of these undocumented children,” Dawson said. DM