Dominion: A master historian claims we’re all products of Christianity 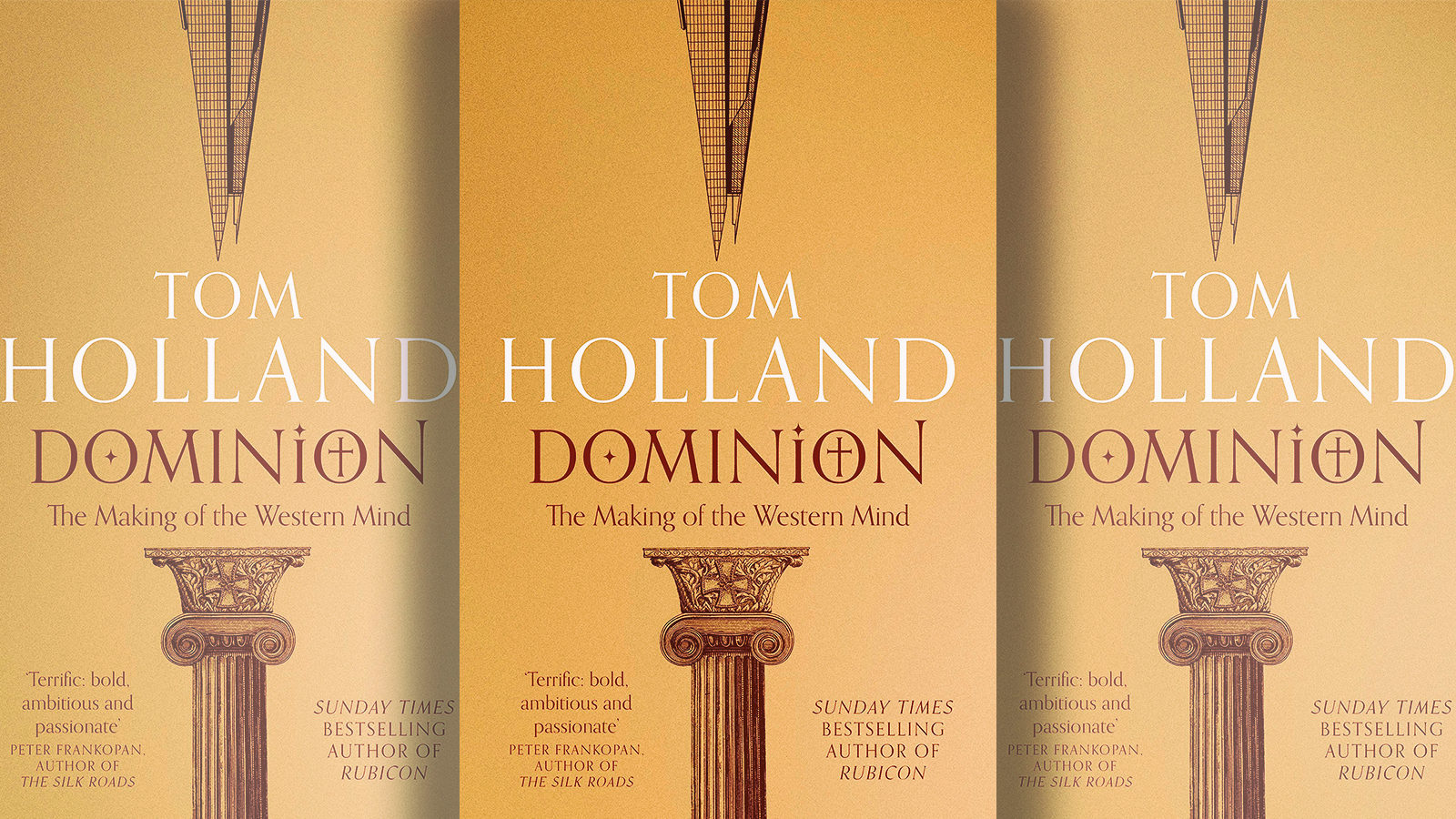 We are all Christians, or at least we have been moulded by its enduring legacy, Tom Holland argues in his evocative new book. Even if you disagree with his thesis, this is narrative history at its best, brimming with a colourful cast of characters and big ideas elegantly told.

Whether you like it or not, you are a product of Christianity’s 2,000-year-old revolution. This is the central thesis of Tom Holland’s captivating new book, Dominion: The Making of the Western Mind.

Holland is a vivid chronicler of the ancient world, carrying the torch for a dying breed in academic history departments: that of the narrative historian. His writing is a forceful reminder that history in the right hands should be a cracking good yarn that yields big ideas, making it accessible to a wider public. Dominion follows in the tradition of his other books which have covered ancient Rome, Greece, Persia, the roots of Islam and Europe at the turn of the first millennium.

But this time round, he carries the story briskly over 500 pages from the age of Roman crucifixions to the Beatles. Along the way, Holland attempts to make the point that Christianity’s impact remains enduring, even in the realms of science, gay rights, feminism and the atheism embraced by this reviewer, who was raised in an Anglican household. This, it must be stressed, is not the work of a Christian engaging in apologetics, but the objective take of a master historian. Not everyone will be won over by his argument, but the elegance with which it is presented — his prose and wit are always sparkling — and the questions raised make this an engaging read.

Is his wider point a valid one? Holland is hardly the first observer to note that monstrous crimes have been committed in the name of Christianity, even while the faith has inspired courageous movements against injustice. South Africa, and Africa more broadly, are prime examples, and among those held up by Holland. Apartheid’s enforcers and apologists certainly groped for Biblical justification for their worldview — a chosen people with a Godly covenant and all that jazz — countered by numerous South Africans who used the same texts to denounce Pretoria’s policies of racism and exclusion.

“If it was as a theological construct that apartheid had been built, then it was a theological construct that it would dismantled,” Holland writes. “An unjust regime stood condemned by the throne of God. ‘It is not a legitimate sovereignty, but a usurpation.’ So Calvin himself had written. When clergymen both black and white, quoting the theologian most admired by Afrikaners, were able to demonstrate in scrupulous and forensic detail, that no possible backing for racial segregation was to be found in his writings, but only the opposite, stern and uncompromising, a hammer blow was dealt to the apartheid regime as decisive as anything delivered by armed insurgents.”

Taking stock of the creed of atheism and secular humanism, Holland says that even “free-thinkers [a rather dated term for this reviewer’s taste] who mock the very idea of god as a dead thing, a sky fairy, an imaginary friend, still piously uphold to taboos and morals that derive from Christianity. In 2002, in Amsterdam, the World Humanist Congress affirmed ‘the worth, dignity and autonomy of the individual and the right of every human being to the greatest possible freedom compatible with the rights of others.’ Yet this — despite humanists’ stated ambition to provide ‘an alternative to dogmatic religion’ — was nothing if not itself a statement of belief.

“Humanism derives ultimately from claims made in the Bible: that humans are made in God’s image; that his Son died equally for everyone; that there is neither Jew nor Greek, slave or free, male or female. Repeatedly, like a great earthquake, Christianity has sent reverberations across the world.”

As someone who self-identifies with “secular humanism,” this reviewer may have some quibbles with these statements, while seeing their broader point: that Christianity has, at times, provided the historical framework for many of the conflicting movements and ideologies that are scrapping it out in the modern world. Barack Obama’s former pastor in Chicago, Jeremiah Wright, famously thundered “God damn America!”. Today, many Republicans believe that a transparent con artist and bully who openly mocks the disabled while embracing a full-throttled American nationalism has been chosen by God to lead America.

Holland is not overtly political, yet one can imagine parties from both sides of the “culture wars”, which are at their most intense in America, claiming his work as a validation of their views. On that subject, Holland, referring to TheHandmaid’s Tale, writes:

“… the divisions satirised in The Handmaid’s Tale were in truth very ancient … That the great battles in America’s culture wars were being fought between Christians and those who had emancipated themselves from Christianity was a conceit that both sides had an interest in promoting. It was no less of a myth for that. In reality, Evangelicals and progressives were both recognizably bred of the same matrix. If the opponents of abortion were the heirs of Macrina, who had toured the rubbish tips of Cappadocia looking for abandoned infants to rescue, then those who argued against them were likewise drawing on a deeply rooted Christian supposition: that every woman’s body was her own, and to be respected as such by every man. Supporters of gay marriage were quite as influenced by the Church’s enthusiasm for monogamous fidelity as those against it were by biblical condemnations of men who slept with men.”

Still, one wonders if Holland at times is not drawing a bit too deeply into the wells of Christian history, in much the same way that progressives and fundamentalists will both quote the Bible to justify their views. Let’s take the example of Charles Darwin.

Holland notes that Darwin was from a family of abolitionists and that such social causes were “Christian through and through” — even as many of slavery’s defenders evoked scripture to justify the keeping of other humans in bondage. Yet, as Adrian Desmond and James Moore argued in their brilliant 2009 book Darwin’s Sacred Cause, Darwin’s hatred of slavery also helped to shape his views on human evolution. His quest, after all, brought forth the notion that our species, Homo sapiens, including slave owners and slaves alike, had a common ancestor, most likely in Africa — a revolutionary concept that today is widely accepted scientific fact etched in the fossil record. Does this derive from the notion that God made us in his image? Perhaps, to some extent, but then that image, in the Darwinian rendering, hardly resembled a modern human. It is also worth noting in this regard that secular humanism can lay claim to a historical tradition in the anti-slavery movement alongside those who sing Amazing Grace.

And history is not static. Darwin’s insights, even if they were the product of a broadly Christian civilisation, clearly channelled their sails of thought down currents that most Christians up until that point in the history of the faith had not imagined. That is why fundamentalists to this day find the implications so chilling, and why Darwin is regarded almost as the spawn of Satan. Those who do not “believe” in evolution today brandish quackish theories such as “intelligent design”, which has transparently been designed to promote overt political and theological agendas and is not very intelligent.

And our own story, as Darwin surmised, began in Africa long ago, and has since branched out well beyond. Many of the elements that shape our culture to this day predate Christianity’s beginnings, which only account for the past 2,000 years, and billions of humans remain in many ways untouched by it — though in fairness to Holland, the subtitle is The Making of the Western Mind.

Still, our African roots and the subsequent paths of those who migrated from the “Mother Continent” have also shaped the modern world, and in ways more profound than any religion could. The development of language; our invention of tools and the weapons that enabled Homo sapiens to become the global alpha predator; our understandable fear of big, dangerous and wild animals, and penchant for eliminating them; our generally diurnal work patterns and nocturnal sleep patterns; our ability to run long distances; our love affair with cooking and with fire; our sleepless nights when the moon is full: all of these harken to a distant past forged in the African bush. The agricultural revolution also predated Christianity by thousands of years, and few of us today eat food that we hunted or gathered from the wild ourselves. That these insights are products of a Christian civilisation that serve to undermine its founding myth is an irony that Holland no doubt appreciates. But the fact is that they are among the forces slowly sweeping it away.

Christianity has no doubt had a huge influence on Western and global history, and Holland has done an admirable job of charting much of its flow. But it is one river in the confluence of history, and one that hardly compares to the Congo-sized one that gushed forth from Africa tens of thousands of years ago. New streams may flow from the river of Christianity, but they also have other tributaries that feed them. Christianity, even if we mark our calendar by its cadence, may yet prove to be but a trickle into the vast ocean of time. ML