Bringing antimicrobial research and development to Africa – the time is now 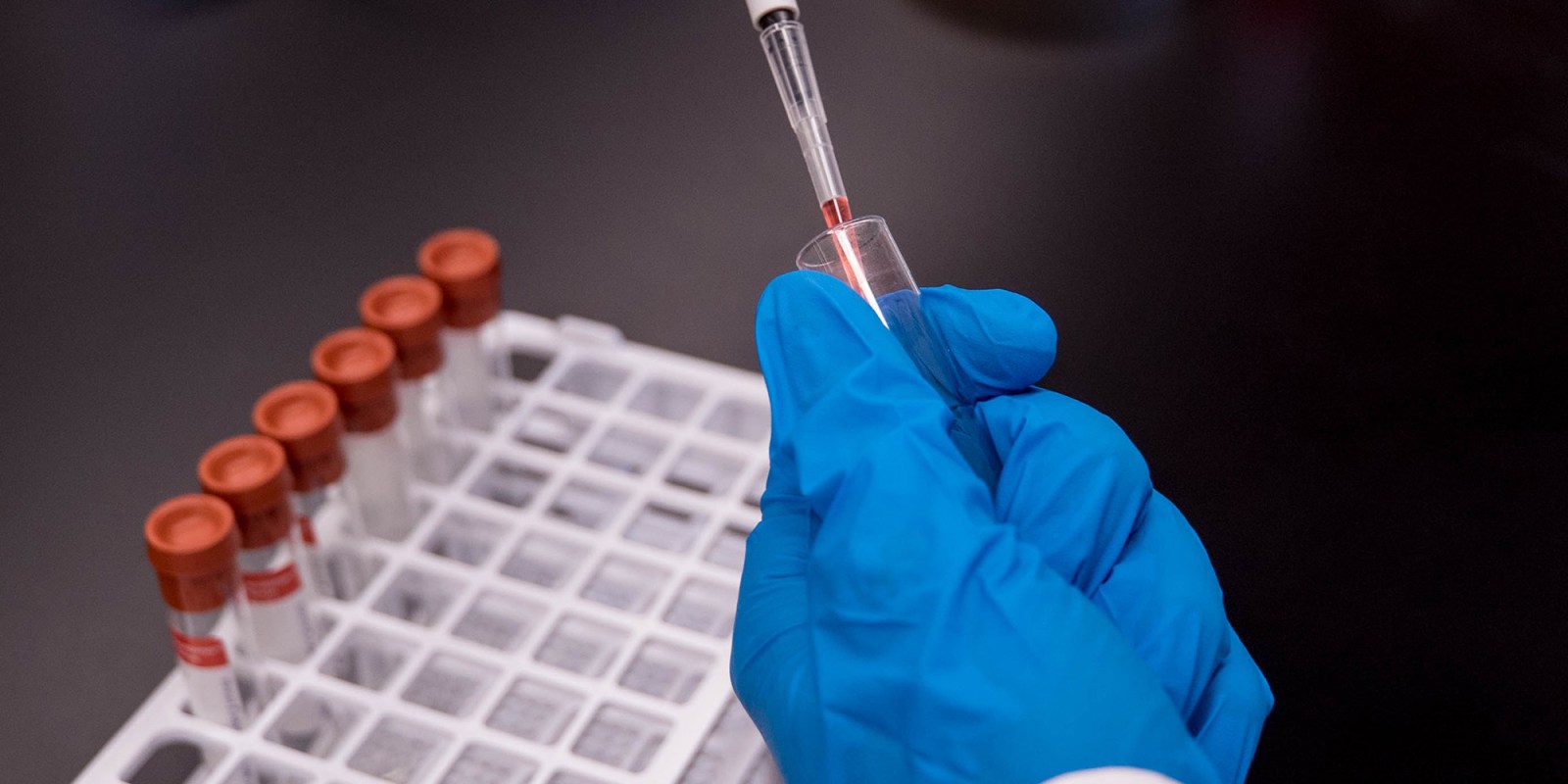 Antimicrobial resistance has been an ongoing threat to public health in South Africa and across Africa. Disturbingly, the burden in Africa from infectious diseases has been on the rise. Part of the reason is the persistence of infections associated with tropical regions as well as the higher rates of poverty and greater spread of drug resistance.

In South Africa, the incidence of 3rd-generation cephalosporin resistance in Klebsiella pneumoniaeinfections is 15-fold higher than what is seen in the United Kingdom. Many of the problems with drug resistance can be addressed through improved medical infrastructure, practices and increased access to medicines.

The pathway to better health solutions will, however, require the development of novel agents. Much of this could be done in countries like South Africa where the issues are greatest and where there is a close connection with the patient population. South Africa “offers” a large patient population and high levels of drug-resistant pathogens present opportunities for infectious disease clinical research. Furthermore, South Africa has clinical trial research capabilities with the necessary medical infrastructure and expertise to meet international regulatory requirements and standards. However, South Africa is less well equipped to contribute to areas of translational research and development (R&D) of new antimicrobials that bridge the gap between basic and clinical research. 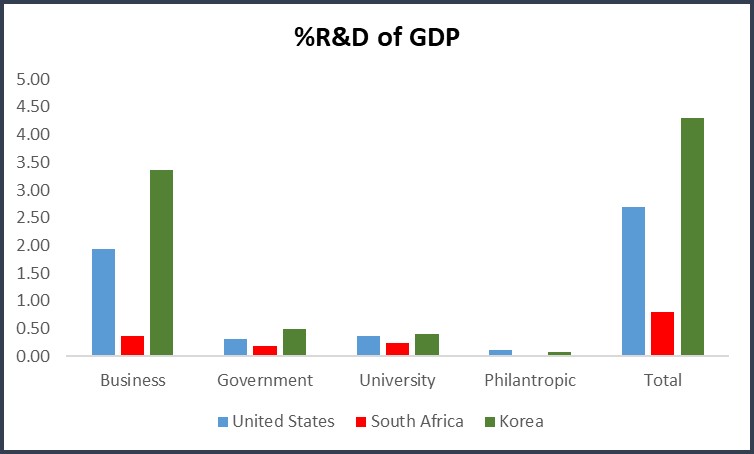 Figure 1 adapted from data in (1) shows R&D investment in 2017 by various economic sectors in the USA, South Africa and South Korea as a percentage of the Gross Domestic Product (GDP) adjusted for purchasing power (calculated from a ‘basket of goods and services’).

What is inhibiting the growth of antimicrobial R&D in Africa?

It is worth discussing the issues and culture that have held African nations back in drug discovery research. Figure 1 compares R&D spending by government, universities, business and philanthropic organisations in South Africa relative to the United States and South Korea, representative of more advanced economies. South Korea notably invests more in R&D than any other nation in the world as a percentage of its GDP when normalised for Purchasing Power Parity (PPP). This culture of high R&D investment likely played a significant role in its transformation over the last 50 years from a low- to-high-income economy and may be instructive in the present day.

However, PPP is an inexact measure when it comes to the R&D spend for middle-income nations like South Africa. On the one hand, lower South African salaries mean lower personnel costs relative to the costs in South Korea and the US. On the other hand, facilities and equipment for R&D work are considerably more expensive than elsewhere, in part, due to economies of scale.

It is less profitable for international companies to serve smaller markets and the lack of local industries thereby call for importation. With this, there is the expense of transport, the difficulty of bringing in technicians for installation and maintenance and, of course, the existence of import tariffs. Through this, analytical equipment, consumable items and other drivers of pharmaceutical research are more expensive in South Africa relative to those in higher-income economies. Perhaps as a result, the largest disparity in R&D spend between higher and lower-income economies comes from the business community.

In South Africa, the business spend on R&D is less than that of the government plus university spend while in the US, the business spend is six times higher. This disparity is even larger when considering industrial drug discovery in South Africa, which is largely non-existent. The pharmaceutical industry consists mostly of a sales organisation, some manufacturing and an emphasis on generic companies. Given limited funding due to a limited tax base and issues associated with poverty that require more immediate attention, it is understandable that the government cannot fill the financial gap. The difficulty with R&D is that it is an investment in the future and, by its very nature, does not address current pressing issues.

What is needed to stimulate a vibrant antimicrobial R&D culture in Africa?

The research culture is curtailed in South Africa relative to that in higher-income economies. Greater private and public institutional infrastructure is needed to carry out R&D to attract talented people towards scientific disciplines and offer reasons for them to stay in South Africa to apply their learnings. Hence, this activity needs to be facilitated so that it can develop the capabilities and expertise to develop innovations that attract funding and create jobs. In fact, in all of Africa, there are no private pharmaceutical drug discovery operations. Rather any work done is mostly in universities.

The Drug Discovery and Development Centre (H3D) at the University of Cape Town was founded almost 10 years ago to carry out translational drug discovery research for infectious diseases. Entirely funded through research grants and collaborations, H3D has provided a training ground for scientists across a variety of disciplines (medicinal chemistry, biology, pharmacology) relevant to carrying out its mission. Furthermore, being the first and only integrated drug discovery centre in Africa, H3D has become a hub of African drug discovery engaging university and government research groups within South Africa and into other countries on the continent.

Much of the impetus for outreach on the African continent is to provide training while inspiring drug discovery research more broadly, bringing a diversity of approaches towards discovering and developing novel medicines on the continent. H3D’s path to prominence is due to a variety of factors, including a clear vision of meeting unmet medical needs, leveraged philanthropic funding with South African government funding, investment in drug discovery leadership, and collaborations established with big Pharma and Product Development Partnership (PDP) organisations.

H3D led an international project team in partnership with the Medicines for Malaria Venture (MMV) that discovered the first-ever small molecule antimalarial clinical candidate in phase 2 clinical trials in Ethiopia and has developed a pipeline of preclinical programmes for the treatment of tuberculosis and malaria. In the process, H3D has built new drug discovery infrastructure, technology platforms and a diverse, multi-cultural team from Africa and around the world. The Global Antibiotic Research & Development Partnership (GARDP) has also established a presence in South Africa (a joint office with DNDi), positioning it well to collaborate with local stakeholders

The timing is right for antimicrobial R&D in Africa

Continued building of infrastructure and capacity development will be key to achieving meaningful progress in Africa. This will need to be done through collaborations with entities around the world to train scientists, grow competencies and spawn an African pharmaceutical industry capable of cutting-edge drug discovery R&D. For this, South Africa has some strengths worth noting: Universities attract students from the rest of Africa and India, and it has an attractive clinical development environment and some government funding, both of which can be used to leverage foreign investment. Hence, the timing is right to bring antimicrobial drug discovery research to South Africa and the African continent. MC

Greg Basarab and Kelly Chibale are with the Drug Discovery & Development Centre (H3D) at the University of Cape Town.