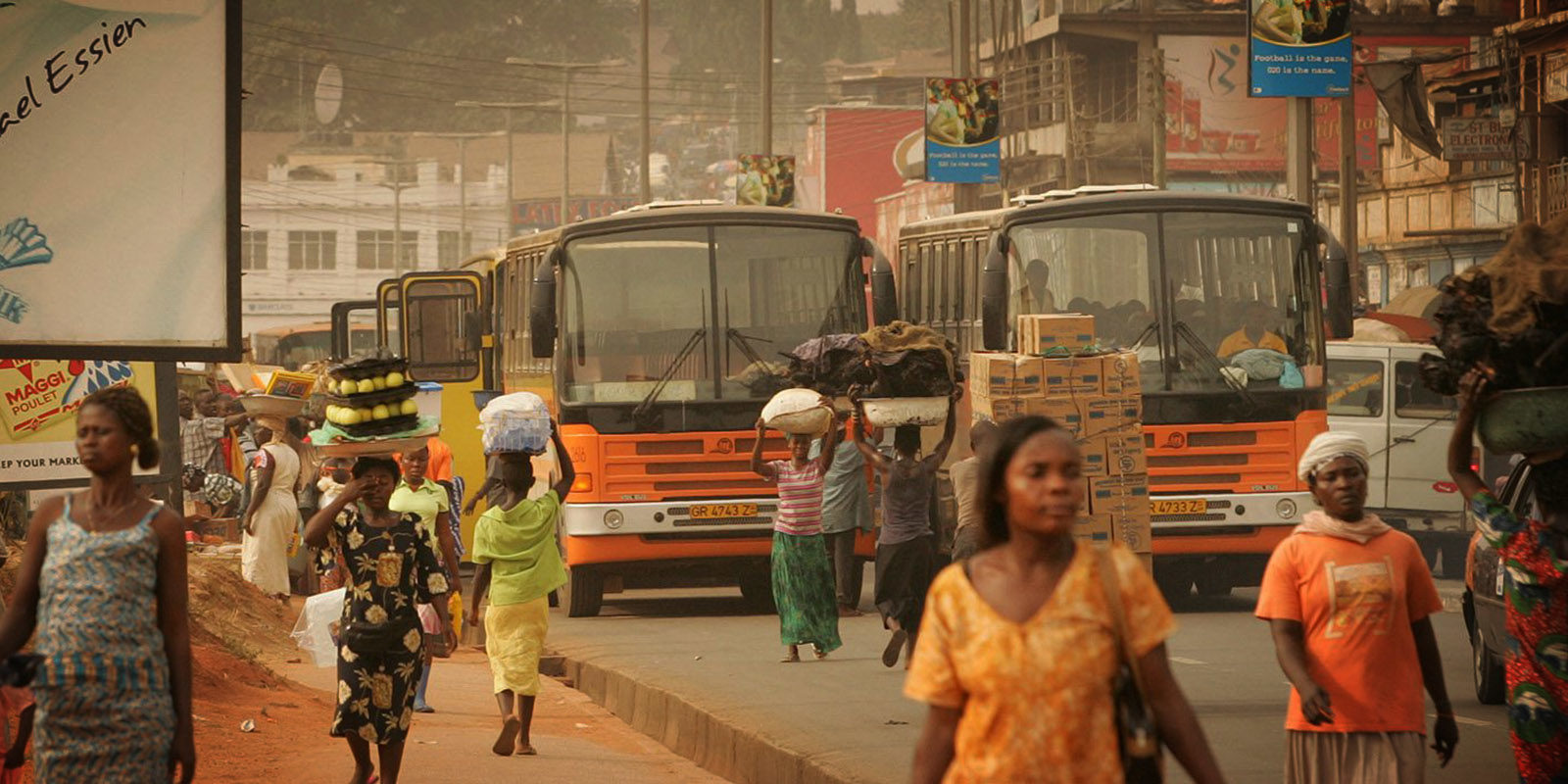 The streets of Kumasi in Ghana. Of Ghana’s youth, (18-35), 13.7% are unemployed and that is with the assumption that these estimated figures are correct. In reality, the figures are probably much higher, says the writer. (Photo: Lefty Shivambu / Gallo Images)

The underlying causes of youth unemployment in Ghana include inadequate job creation despite relatively good economic growth; poor access to, and quality of, education; and a mismatch in skills appropriate to the labour demands.

The unemployment rate in Ghana has averaged 6.6% for the past five years, implying an unemployed population of about 825,000 Ghanaians, of those counted to be in the labour force. Unemployment lingers in Ghana — this is not good now, nor for the future.

Ghana’s economy, a darling of the international community, has failed to create enough jobs for its population, especially the youth. Today, total unemployment stands at 6.7%, 0.7 percentage points above the sub-Saharan average and 1.7 percentage points above the world average. Compared to countries like South Africa which have unemployment rates upwards of 20%, one might say Ghana is not doing badly. However, for a country the size of Ghana with its relatively peaceful history and the long-standing “hope of Africa”, the country could do so much better.

Similarly, given the rate at which the population is growing and considering developments such as the African Continental Free Trade Agreement (AfCFTA), addressing the issue of jobs should be an utmost priority.

Among the youth, unemployment is worse. Of Ghana’s youth, (18-35 years of age), 13.7% are unemployed and that is with the assumption that these estimated figures are correct. In reality, the figures are probably much higher.

“One of the main reasons for this is that there are marked discrepancies in unemployment data available. The World Bank, for instance, says one thing and the Ghana Labour Force Report says another,” Ashon says, referring to a 2016 World Bank report that showed youth unemployment at about 48% while the Ghana Labour Force Report figure was just a third of that.

These discrepancies show that the narrow formal definition of unemployment may not necessarily fully capture the extent of unemployment in sub-Saharan African countries, like Ghana. When asked why that unemployment, and more so youth unemployment, was so high, Ashon noted that “people are employed today and tomorrow they are not. There is little security”.

Indeed, if there is one thing that exacts a collective accord in Ghana today, it is that the lack of jobs is tearing at the socio-economic cohesion of the nation. Should we worry? Perhaps. A youthful population unable to secure a prosperous economic future is unlikely to look on in futility and wait for change to happen.

While this does not automatically mean doom, the concern lies in the fact that 10 to 12 million youth join the African labour force each year, yet only about 3.7 million jobs are created annually. Despite recent progress in poverty reduction, up to 71% of sub-Saharan youth still live on less than $2 a day. In the absence of strategic reform in economies, most African countries, Ghana included, will face multiple social, economic and political challenges in an already precarious world.

The underlying causes of youth unemployment in Ghana include inadequate job creation despite relatively good economic growth; poor access to, and quality of, education; and a mismatch in skills appropriate to the labour demands.

Although the country has experienced some growth over the past couple of years, job creation opportunities for many young people are few and far between, popularising the phrase jobless growth — 1% of economic growth translates into 0.47% growth in employment, with most of these gains captured in the informal sector. This means that while growth may have occurred, it has not led to the creation of formal wage jobs which can contribute to the structural transformation of the economy. Even with existing jobs, the quality of decent jobs (productive jobs that deliver fair income, security and social protection) in Ghana are few, as hinted at by Ashon.

Similarly, Ghana has over the years seen a shift from agriculture to services, mainly low-value services concentrated in the informal sector. Efforts at economic transformation appear to lack vigour as manufacturing value-added trends downward and high incomes and improved livelihoods for its population remain out of reach. In addition, rising utilities, fuel and basic commodities prices have gnawed at consumers’ purchasing power and general hardship is the gel of every conversation at social functions. There are not enough jobs, nor good ones at that.

Sub-optimal education and training outcomes in Ghana are also significant contributors to high unemployment, especially among the youth. Education improves the quality of lives, raises productive capacities and creates more broad-based access to opportunities. The famous and somewhat clichéd statement that “give a man a fish and he will eat for a day. Teach a man to fish and he will eat for a lifetime” offers insight into the importance of education.

The world is changing rapidly, and the skills demanded by the global workforce are changing with it. Expanding access — as Ghana has recently done — is great, but improving quality is greater and can yield tremendous results that will help Ghana achieve faster and more sustainable economic development. Without investment in its human capital, no country can do this.

Similarly, our educational systems, like most on the continent, do not prepare pupils for the economic realities prevailing outside school systems. For many, theoretical concepts remain the order of the day with limited scope for training and practical skill acquisition. Ashon said that the 2018 Education Sector Analysis Report showed that nearly half (48%) of TVET staff do not have technical skills qualification while there remains little or no involvement of industry in skills training. Most people who create or can create jobs are not involved in the education system, robbing both parties of producing a population with the skills that are actually needed.

Additionally, technical schools use outdated and archaic methods and machinery, rendering their graduates economically undesirable upon graduation. Ghana’s education spending as a percentage of GDP stands at 3.6% and rivals that of South Korea, Japan and Singapore. Which maintain a 3%-4% range — and yet one cannot compare our outcomes to theirs. As a nation, our delivery on education has been sub-par and has led to costly deficits in potentially high-growth sectors. While many have raved about the need to focus on TVET schools, very little is being done to push this agenda. Ashon noted that “2014 was the only year technical schools received the highest allocation and that was only 3.8%”; it’s not been much more since.

This has created a large pool of youth either involved in menial or low-paying jobs, or aimlessly seeking greener pastures, or perhaps a relative who can get them into some position through back-door connections. To succeed, the government needs to be better integrated with the needs of the private sector that offers a strong path to higher rates of economic growth through increased productivity, better knowledge of how to position existing firms in the global value and supply chains, and how to minimise technological and savings gaps. This will not come about if the private sector is viewed, and treated, more favourably than they are.

Ghana’s challenges with unemployment are not insurmountable. They’ve been dealt with before. At the turn of the millennium, Ghana saw a consistent decline in unemployment. Former president John Agyekum Kufuor’s administration worked strategically to harness an agricultural transformation to strengthen the nation’s economy, halving the number of hungry people and helping to slash poverty in half.

It all began with a change in the tax code.

Taxes on cocoa, a primary export commodity, stood at 60% of the market price, leaving farmers with only 40% of the value of their output. When Kufuor came to power, he reversed this, “giving the farmers 60% of the profits”, Kufuor recalled in an interview with the Thomson Reuters Foundation.

“The state had been over-taxing the farmer,” said Kufuor.

By supporting farmers with necessary input such as fertiliser, within four years cocoa production had increased twofold, not only providing increased income for the farmers, but also for government coffers. In a country where some 60% of the population depends directly on rural agriculture, one can start to visualise the impact that had for Ghanaians.

Since then, subsequent administrations have not been as successful in creating such recognisable impacts, and unemployment has gone back up (see figure below). For the impending population surge to be a positive or negative impact is a factor, principally, of how the government responds and empowers job creation in productive sectors.

Progress towards tackling unemployment will require targeted and well-enforced policy initiatives that address key sectors and populations. Domestic vested interests ought to be mobilised to reshape, reallocate and make compromises around power distribution to ensure that much of our planned and well-written policies are implemented with adequate financial resources and political willpower to see them to completion. Ghana has had plenty of visions, including the recent Ghana Beyond Aid policy.

While there is nothing fundamentally wrong with ambitious plans, the important element of these plans — execution — often fall short. The president has good intentions, but translating those into reality successfully is what is likely to erode his claim to fame. Without decisive domestic leadership preoccupied less with awe-inspiring visions than tackling actual issues, Ghana will continue to see spurts of perceived growth, but only resulting from favourable — and seasonal — commodity prices.

So, if we really want to figure out how best to get Ghana growing fast, fast enough to create employment for its budding population, the government will need to anchor, with laser-like intensity, on creating an environment where businesses, investors and entrepreneurs can succeed. A youthful population unable to secure a prosperous economic future for themselves or their families are unlikely to look on in futility waiting for change to happen, they will demand it. The question is, at what cost? DM

Marie-Noelle Nwokolo is a researcher at the Johannesburg-based think tank, The Brenthurst Foundation.

Once profitable, ACSA may now need R11bn over the next few years in the face of pandemic pressures

SA’s property sector is dead, but investment opportunities abound for those who adapt