Ben Turok, rebel, revolutionary, thinker, truth-teller — one of the last of The Struggle greats 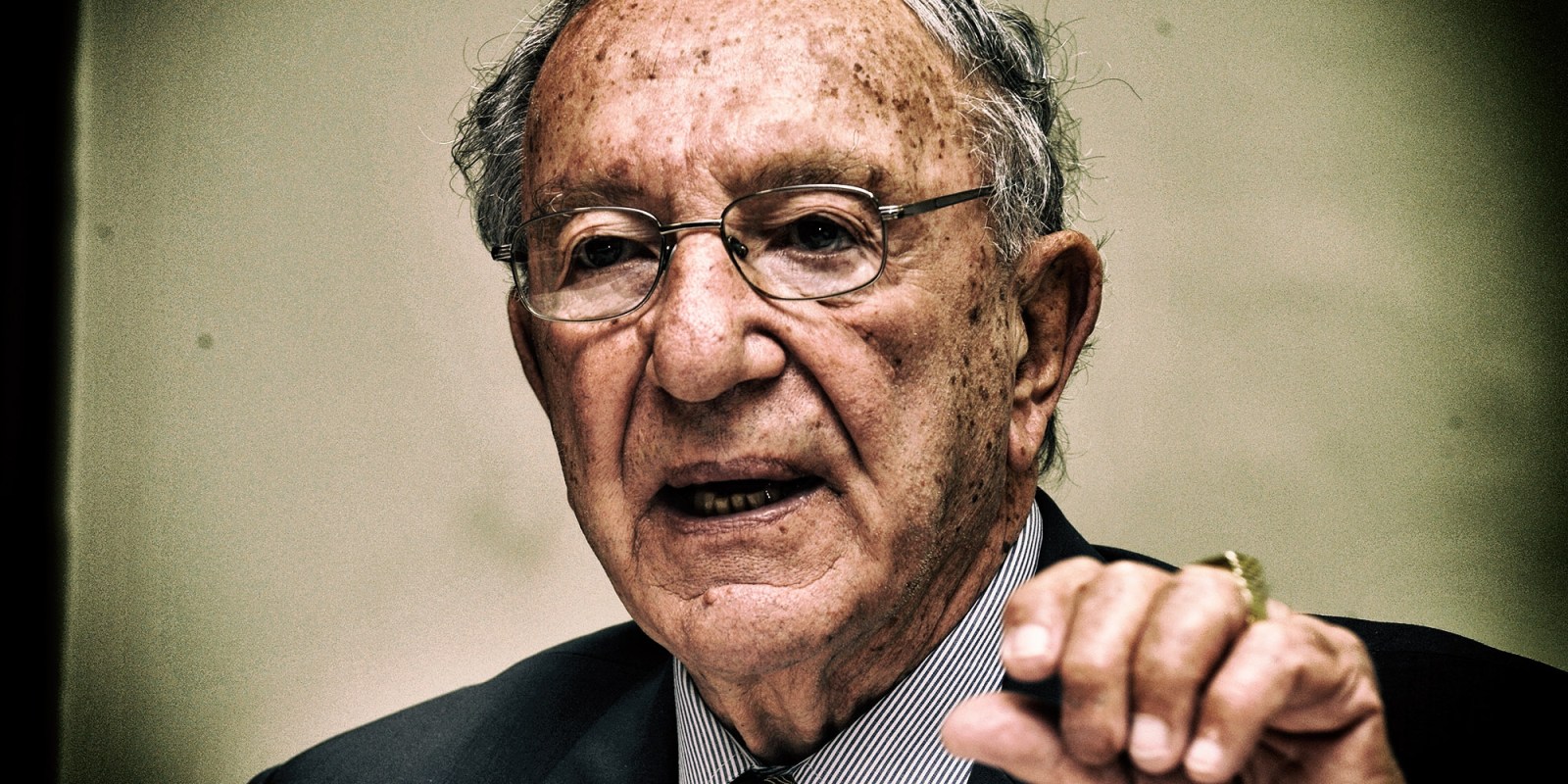 Ben Turok, sole surviving member of the 1960s Communist Party underground leadership, author of the ‘economic clause’ in the Freedom Charter, champion of the RDP and one of the most consistent and outspoken intellectuals, and critics, of the ANC, has died in Cape Town at the age of 92.

“Can the ANC bring about the transition and transformation promised over all those years? I believe much depends on what it does now, but is also governed by what went before. Hence the need to look behind us.” — Ben Turok (2003)

It is unsurprising that the public announcement of the death of Professor Ben Turok at the age of 92 in the early hours of Monday 9 December 2019 in Cape Town should make clear that Turok had requested “a private ceremony, rather than anything official or formal, in view of the present predicament facing the country”.

The specific “present predicament facing the country” is a suitably polite metaphor for Turok’s searing and ongoing criticism of governance failures by the ANC.

Turok was never shy in expressing his “disgust” at the “posturing” of contemporary politics as well Parliament’s failure to take action, specifically against Jacob Zuma, “a corrupt president”.

Turok, who served as an MP from 1995 until 2014, was also hauled before the ANC’s disciplinary committee for “ill-discipline” and for being “counter-revolutionary” after abstaining, in 2011, from voting for the unconstitutional Protection of State Information Bill (otherwise known as the Secrecy Bill).

As co-chair of the ethics committee, he was also admonished by some in the ANC for investigating Dina Pule, Minister of Communications from 2011 to 2013, for various violations.

“Indeed, it may be that throughout my political life in the ANC, I have been driven by ideas rather than practical politics, trying to move the process faster than objective reality allowed,” Turok concluded in his 2003 autobiography Nothing But The Truth (Jonathan Ball).

The Turok family released the announcement about Turok’s death about noon on Monday, stating that he “was always outspoken and dedicated his whole life to fighting for freedom, equality and social justice in South Africa”.

Born to poor, Jewish, working-class parents in Byelorussia and raised in what he termed as “the highly charged political climate of Tsarist Russia”, Turok’s parents had been influenced, he said, by radical Bundist politics.

His father had later become involved in the Jewish labour movement and the family migrated to Libau, Latvia, one of the first European countries to “experience the emergence of a fascist movement”.

Turok’s father sought to move the family to safer shores, departing for South Africa and leaving Ben’s mother and other three sons, aged seven, 10 and 13 “to survive” in Libau, before the family finally migrated to Cape Town in the 1930s.

After retiring from Parliament, Turok was the director of Institute for African Alternatives (IFAA) as well as publisher and editor of the New Agenda magazine.

In a statement, the IFAA paid tribute to Turok, saying he would be remembered “as an icon of the struggle for justice and democracy, a man who throughout his life remained determinedly committed to equality, non-racialism and full human rights and he demanded dignity for all the people of South Africa.”

Turok died, said the IFAA “still fighting” and in his last statement had asked: “Is there a way out of this mess”?

He left South Africans to ponder “what has happened to all the aspirations for creating a society which benefits all, including the poor and unemployed”?

Turok was a witness to almost every key decision that led us to democratic South Africa as we know it, albeit not without severe censure and punishment for his consistent independent thinking and outspokenness within the movement.

In Nothing but the Truth, Turok wrote that his recollection of history was “an attempt to get to grips with the unsavoury side of our communist heritage”.

Turok resigned from the Communist Party in 1976 over channelling funding to the trade union movement in South Africa via Harold Strachan, an MK explosives expert later imprisoned for sabotage.

He was part of the organising committee for the 1952 mass defiance campaign which saw the transformation of the ANC from a “rather moderate organisation led by eminently ‘respectable’ professionals to a mass-based militant liberation movement”.

During the clampdown by the state during the defiance campaign, 8,500 people defied apartheid laws and 100,000 joined the ANC.

Turok was also a contributor to the Freedom Charter which was adopted by the Congress of the People in Kliptown in 1955 and which today forms the bedrock of the South African Constitution.

Writing in his autobiography of his horror at the adoption in 1992 by the ANC of “The Growth Path for the New South Africa” economic policy over and above the RDP, Turok objected.

“As the author of the economic clause in the Freedom Charter, I was bound to remind the meeting that there was a commitment by the ANC to the transfer of certain basic industries ‘to the ownership of the people as a whole’ ”.

Before the adoption of the Freedom Charter, Turok was a founder member in 1953 of the Congress of Democrats — “the white partner” to the ANC and the SA Indian Congress and was, until his death, the sole surviving member of the underground Communist Party leadership.

This included Moses Kotane, Michael Harmel, Yusuf Dadoo, Ruth First, Jack Hodgson and Bram Fischer, who were forced to take the party underground after the mass arrests and bannings during the 1960 State of Emergency had led to a decision to “disband” it.

Turok was arrested in 1962 under the Explosives Act, sentenced to three years, released and placed under house arrest before being forced into exile where he remained for the next 20 years.

Leaving behind his wife Mary (nee Butcher) and their three sons, Fred, Ivan and Neil, Turok jumped the border into Botswana and ended up in Nairobi, Kenya, where his family later joined him.

The Turok family settled in Tanzania where Turok had already expressed his disquiet to then ANC leader Oliver Tambo about the ANC’s leadership in exile.

A searing criticism of the ANC’s external mission was contained in a document Turok authored and titled “What is wrong? A discussion on the Present Situation in the Southern African Liberation Movement”. Suffice to say he raised the ire of many in highlighting the style of ANC leadership in the exile.

“Our officials have come to adopt authoritarian attitudes towards comrades in lower positions. Bossmanship is the rule of the day and commandism, a feature that is always a danger in an army, has come to stay in our political relations as well,” he wrote back then.

He noted “the air was thick with grievance and suspicion” and that “evidence of maladministration is massive”.

In his reply, Joe Matthews, then Secretary of the Morogoro Conference Preparatory Committee, countered Turok’s accusations as “too lurid, melodramatic and unjust”, adding: “There are so many allegations that it is not easy to know where to start.”

Matthews concluded that Turok’s suggestion that an “elite” was emerging in ANC leadership in exile “is quite honestly nonsense”. However, history will prove Turok, as well as other critics such as Chris Hani, correct.

While Turok had grown up in a home with Marx, Engels and Lenin on the family bookshelves, it was while completing his professional articles as a surveyor in then Rhodesia, that he was converted “from a dilettante socialist into a revolutionary”.

A client of the land surveying concern which had employed Turok was none other than farmer Ian Smith — later to become prime minister.

In 1952 Turok left for London to register for a post-graduate diploma in town planning at the University of London. There he joined the Communist Party of Great Britain and was placed in the special South African branch. It was in this position that he was tasked with “looking after” ANC leaders such as Walter Sisulu and Duma Nokwe.

He later became the editor of Sechaba, the ANC’s publication launched in 1967, until 1972.

In the first chapter of his autobiography, titled “Rebel Son”, Turok explained he felt the “urge to tell my story about experiences in the old ANC and the Communist Party, about how we worked underground, about leaders like Moses Kotane and Chief Luthuli”.

Turok, being a political animal, had difficulty merging the personal and the political as “when one becomes an ANC activist, one soon learns to subordinate one’s personal life and feelings to the collective”.

His book, he said, was an attempt of “recovering the past in the midst of turbulence.”

“This is not because I have any regrets. Not at all! I have had the richest of lives, tough as mine was, even though South Africa still has to complete its transition and press on with the transformation. The struggle is by no means over.”

Ben Turok’s death is the equivalent of a library, a repository of our history, having burnt down.

But he has left us with enough to digest and redigest in terms of the hopes and dreams contained in the Freedom Charter and the long, hard road to democracy. South Africa, Turok, understood, was at a tipping point which required real commitment to transformation and justice in a time of personal political power, deep corruption and greed which have all almost completely corroded the soul of the ANC.

His legacy should enable us to look behind us in order to chart a firm course into a turbulent future.