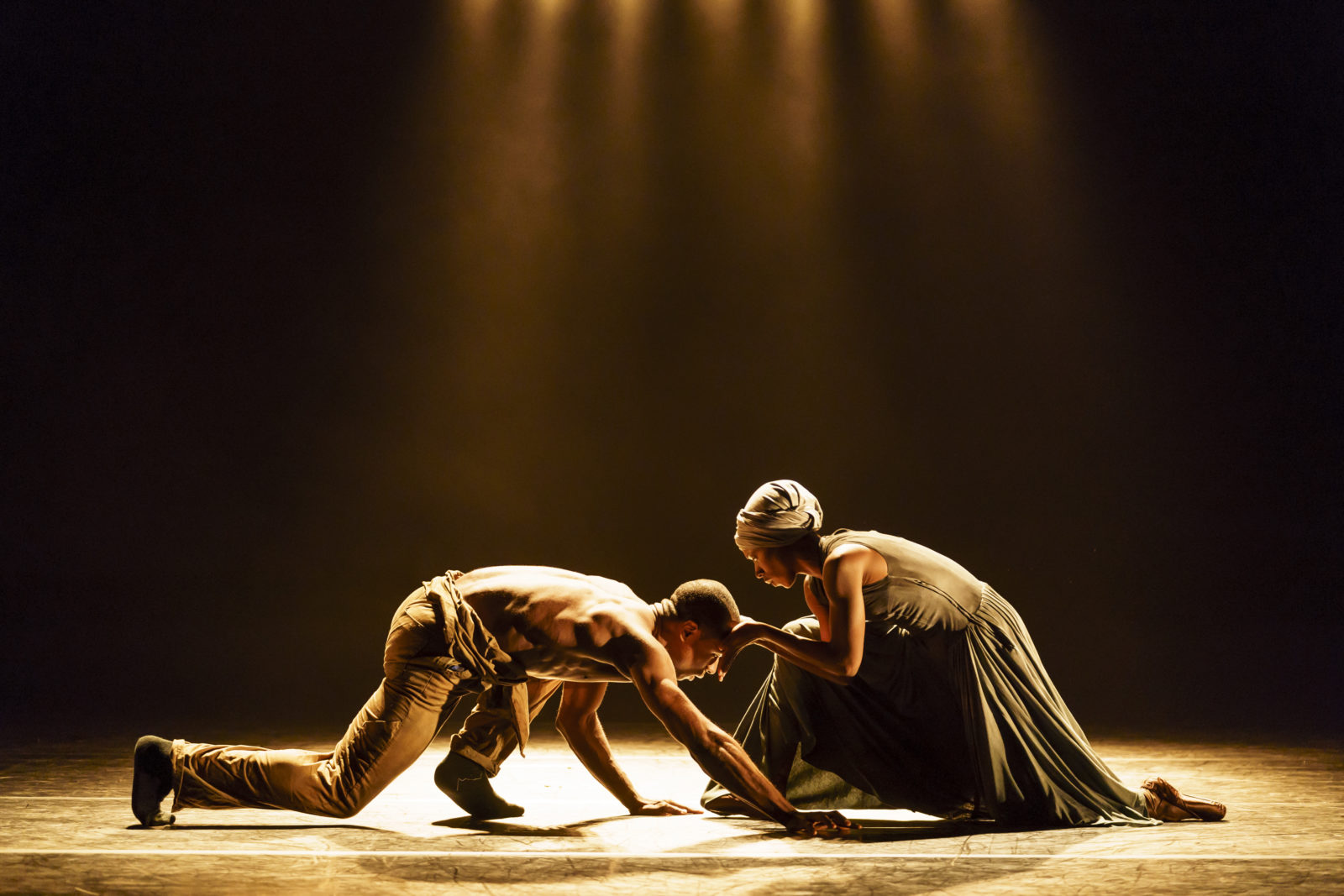 South Africa’s history is etched bitterly with the past, present and future of its gold mining industries. It’s hardly the subject for a ballet.

Gold mining has always been an industry of dispossession, racism, vicious hardship, disease and dislocation. Yet, occasionally it has also been an industry of heroic resistance to that oppression, notably the great miners’ strikes of 1946 and 1987 and then the strike on the North West platinum belt in 2012 that led to the Marikana massacre.

On 1 November this year, on the spur of the moment I was drawn to a ballet at the Oxford Playhouse in London. It was titled Triple Bill and my interest was piqued because the ballet company was exclusively black and one of the dances, so I was told, was about the 1946 mineworkers strike in South Africa. In the midst of an overwhelmingly white audience, watching Ingoma (the name given to the ballet) I wondered if mineworkers could ever imagine that their daily grind would be transformed into the stuff of ballet; that their pain and oppression would be turned into a performance of dignity, in a far-off city they could never imagine.

Yet, that is what South African dancer and choreographer Mthuthuzeli November has done with Ingoma, which he wrote, choreographed and danced for the British ballet company Ballet Black.

A few weeks later I tracked November down in London. In an interview, I asked him how he manages to square such an elite and imperial form of dance with our history; what drew him to ballet? What were the struggles and support that he has encountered as a black performer in a historically white art form?

His story was another cause for wonder.

November is 26. He sat opposite me in Ballet Black’s low-key studio in a youth centre just off a railway line near Regent’s Park in London. He was halfway through a rehearsal of the 2020 repertoire of Ballet Black, which will include a second dance that he has been commissioned to create, choreograph and dance.

He told me how the idea for Ingoma came to him in 2017 when he attended a lecture at the British Museum on the history of the development of South African art. For the first time he saw a painting by Gerard Sekoto, Song of the Pick, that depicts a group of mineworkers in South Africa. He was struck by its use of colour, “a whole story-line in a single picture”, the subtlety of its communication.

“It was saying something to me.

“Immediately, I asked the person sitting next to me for a pen and paper,” he says.

For a little while, he forgot about the painting, but then it returned to his thoughts, intriguing him with both its physicality and its visceral quality.

It’s a political painting. Sekoto was a politicised painter. But November is not and has never been a political activist. He’s first a son, then a brother to four siblings. He’s also a football player.

He grew up in Zolani, one of those tiny apartheid ghettos that are tacked on to small white towns, in this case, Ashton in the Little Karoo, and provide their reservoir of cheap black labour. More of this part of the story later.

November was born in 1993, on the cusp of liberation, but admitted that while he was growing up, he had little knowledge of the Struggle. The Marikana massacre took place while he was a student at the Cape Academy of the Performing Arts (CAPA), but, somehow, he was one of the few people who weren’t aware of it.

So, it had to be in far-away London that Sekoto’s painting catalysed his political coming of age. He researched further and found out about the 1946 mineworkers strike, in which at least nine people were killed and over 1,000 brutalised.

But, while this awakening was going on in his head, he was on his own life’s journey. November unfolded his tale, and as I listened I was reminded of another tale, set in another miners’ strike, of another young working-class boy who pursued an unlikely dream to be a ballet dancer despite ridicule and all the obstacles put in his way. It’s called Billy Elliot and if you haven’t seen the film you should.

November is the third-born son of Nomasiniya November. He also has a sister. His mother is a seasonal worker who labours in a factory canning apricots and peaches from the farms. His father disappeared when he was six and after that, his mother did her best to make ends meet. Money was scarce, so the main thing she had to offer her kids was love and hope.

“I always remember what my mother had to go through raising four boys. She let us do what would make us happy. She encouraged us to take every opportunity that might take us out of Zolani.”

This was why, he explained, Ingoma is really a dance about the strong women in mining communities. He could portray them because he knew their lives intimately through his mother.

Many professional ballet dancers will tell you how they started dancing when they were only two or three, how they were nudged and nurtured, tutored and trained. Not Mthuthuzeli November. He only started dancing when he was 15, and even then, only after a chance encounter that turned his kwaito dance moves into the moves of an evolving ballet dancer.

“It was my brother who drew me in. He went to some outreach classes organised by Dance for All. Then he told me to come and check it out. So, I decided to skip football practice.”

His teacher was struck by him. She thought he said his name was Tutu (the name of the garment worn by women ballet dancers) and took a liking to him. She asked him to try and show the other children how to include some kwaito moves into ballet.

“The kids were so slow that I had to stay and teach them and that’s when I started picking up ballet steps, like the plié and tendu. Soon it became normal to wear tights and before long ballet was bringing me the same joy I always felt when I danced kwaito.”

By such accidents, new stars are born.

Fast forward, and after being awarded a scholarship to the CAPA by Debbie Turner in 2015, he went to London to join the Central School of Ballet where he met Cassa Pancho who saw his unusual talent and soon invited him to joined Ballet Black as an apprentice artist.

By 2017 he had been promoted to junior artist, one in a company of eight black ballet dancers. Finally, November’s two journeys converged when, in 2018, he was commissioned by Pancho, the founder and artistic director of BB, to produce his first work.

Pancho, who in 2013 was made a Member of the British Empire (MBE) for “services to classical ballet”, told me that from the beginning she had recognised a special talent and spirit in November. She was ready to let someone she trusted innovate “by giving a relatively junior artist a very senior responsibility”.

And so, from the brushes of a Sekoto painting a new ballet came to life.

Ingoma was not an easy commission for November. For Cassa Pancho, there has always been a need to show the ballet establishment that black dancers can “do ballet as well as anyone else”, that is, “meet the establishment on their own terms”, as well as to innovate. So, according to November, “my introduction of ballet moves in gumboots for male dancers could not displace en pointe for ladies”.

And for the dancers themselves, it was new: “A story of struggle is a universal story. The more we performed it the more it became very personal for everyone in the company. We don’t really feel like mineworkers, but like people struggling to hold it together. At the point when you feel that, the body translates it.”

In March 2019, Ingoma premiered at the Barbican Theatre to positive reviews. The night I saw it in Oxford the applause was well-meant and proper. I was sitting next to two black students. We wanted to give it a standing ovation, but the British are very cautious when it comes to how they respond to something they don’t fully understand.

When we talk about its reception November is vulnerable for a moment.

“It was a big deal for me, very scary. I put myself in a very vulnerable position as a young choreographer. I needed to protect and enhance the identity of Ballet Black; I needed to balance contemporary African and classical ballet. But it was also personal. Ingoma came at a special time, soon after I’d experienced losing someone close to me for the first time.”

Since that night it has been performed numerous times, before diverse audiences across Britain as well as in Trento in Northern Italy.

Both November and Pancho comment on how the ballet, even though it is danced in a genre unfamiliar to most audiences, with its music sung in Xhosa, a language unknown to Britons or Italians, found a particular resonance with people from mining communities in Northern England.

So, I get to my big question:

“Will it ever come to South Africa and if it did would they perform Ingoma in places where mining communities could have access to it?”

In separate interviews, both November and Pancho pause, hold their breaths as if holding in a dream, then both say yes.

“We would love to. It’s really just a question of money to get the company to South Africa.”

For November there’s one other issue. He may be a successful dancer in London, but his mother has not seen his work. His younger brother – the one who persuaded him to drop football for an afternoon – is a ballet dancer in Canada. But his sister and two elder brothers are unemployed at home, prone to the very things his mother wanted them to escape from, gangsterism and drugs. She can’t afford to travel to Britain. So, if his ballet could travel to her it would allow the wheel to come full circle.

Mthuthuzeli November is allowed to dream.

After all, it is impossible dreams that set us free. ML

Loss, grieving and the pandemic

The many influences of fashion on culture and the world

Sweet dreams are made of this