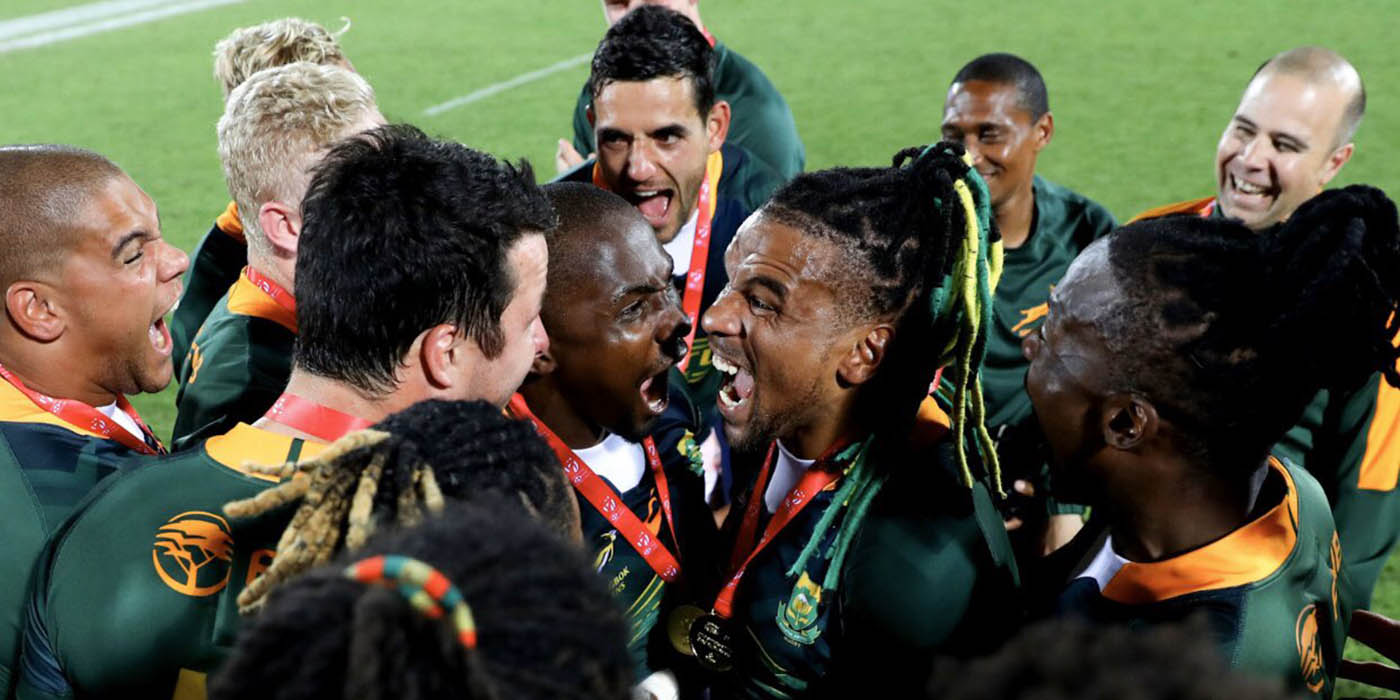 South Africa's Blitzboks kept the All Blacks scoreless in their 15-0 win in the Dubai Sevens final on 7 December 2019. (Photo: Rosko Specman / Twitter / @speckmagic11)

The Blitzboks kept the spirit of Rugby World Cup 2019 well and truly alive after a superb victory at the Dubai Sevens on Saturday — the opening round of the HSBC World Sevens Series.

With South African rugby on its most positive footing in a decade, the Blitzboks, who prior to 2019 were the one team that consistently made headlines for the right reasons. when other sectors of the sport were floundering, gave notice that their stated ambition to win an Olympic gold medal in Tokyo in 2020 is not misplaced.

Neil Powell’s men beat New Zealand 15-0 in the Dubai final, having thrashed Samoa 38-7 in the semi-finals. They finished the weekend with six match wins after topping their pool and became the first team in 19 years to stop New Zealand from scoring a point in a match.

The Blitzboks’ seventh Dubai title has set them up perfectly for Cape Town Sevens, which takes place in the Mother City next weekend.

To add to the success of the weekend, the SA Academy team, consisting of players that didn’t make the final cut for the Blitzboks, won the International Invitational tournament in Dubai to underline the depth and quality of the SA Sevens programme.

Blitzboks captain Siviwe Soyizwapi turned 27 last Saturday and his team delivered the perfect birthday gift on a day when they also had to overcome Argentina in the quarterfinals of the tournament.

“I was saying to my roommate Ruhan (Nel) yesterday morning how great it would be if we won the tournament on my birthday,” said Soyizwapi after the final.

“And now we did. Since that final whistle went, I have been almost speechless, taking in the effort the guys put out there.

“We have great depth at the moment and that pushes the guys even more,” Soyizwapi said.

“The Academy side also won their final and there are also several current Blitzboks in that team. We are very fortunate to be in that position. As a squad, we always strive for improvement.”

Powell was naturally delighted with the outcome, but as always his attention was focused on how to improve, rather than basking in the success of winning the first of the 10-tournament series.

On day one, the Blitzboks struggled in their opening match against Kenya, eventually winning 17-12. It was that performance more than the much-improved outings later on which caught the coach’s attention most.

“Coming to Dubai, it was not really about the outcome, but the process we needed to implement. We had a great effort out here and if we can repeat that, we can be successful in Cape Town again,” said Powell.

“I was wondering after that Kenya game if the guys would be able to find each other during the tournament — as we progressed in the tournament they did and became a very tight team at the end.”

Powell used the Dubai tournament to match some players who returned from fifteens with some of the junior players, who played last season.

“Some of the younger players did not play with the older guys before and they needed to find each other out there,” said Powell.

“Someone like Kurt-Lee (Arendse) has not played with Ruhan (Nel) or Rosko (Specman) before, so that was always going to be a challenge. They pulled together as a team over these six games and I am very proud of their effort.

“They improved with every match.

“The step-up on defence was great and that was one area we are very pleased about. If you can keep teams out, you will be successful in tournaments.

“Samoa was not bad at all and Australia impressed me as well. England also played very well towards the end and New Zealand was strong.

“The final against New Zealand was incredible and they deserve a lot of credit. It was very tight. In the first half there were a couple of end-to-ends and they scrambled so well.

“We had turnovers and attacked, but their scramble defence was excellent and we just could not score. We stayed in control of the match though and that was the difference. From the kick-off we had control.”

Academy coach Marius Schoeman believes the team met its objectives in terms of giving key players some game time. Blitzbok star and former World Sevens Player of the Year Werner Kok was one who needed to find his “sevens legs” again after competing in fifteens with Toulouse over the past two months.

“We wanted to give some guys game time and everyone had a good run in the tournament,” Schoeman said. “It is also important for the Academy squad to put pressure on the incumbents in the Blitzboks side and a number of players certainly did that this weekend.

“Both teams won their finals, so that shows good depth and we are doing something right.

“We are working towards the Olympics next year, but for now we are looking at working together with the Blitzboks to best prepare the squad that will eventually go there. For now, though, the World Series is the priority.”

The only injury concern for the Blitzboks was over record try-scorer Seabelo Senatla who suffered a minor ankle injury on day one last Friday.

“I had a slight ankle strain on Friday, so I sat out of the action, but everything was fine for the final day,” said Senatla.

“I have to give credit to our medical staff, they called it and it worked out perfectly. We already trust them, and after today, I trust them even more.”

Senatla scored three tries in Dubai to take his record total to 227. He is three behind third-placed Ben Gollings of England on the all-time scoring list. DM