Cyril’s Choices: Lessons from 25 Years of Freedom in South Africa 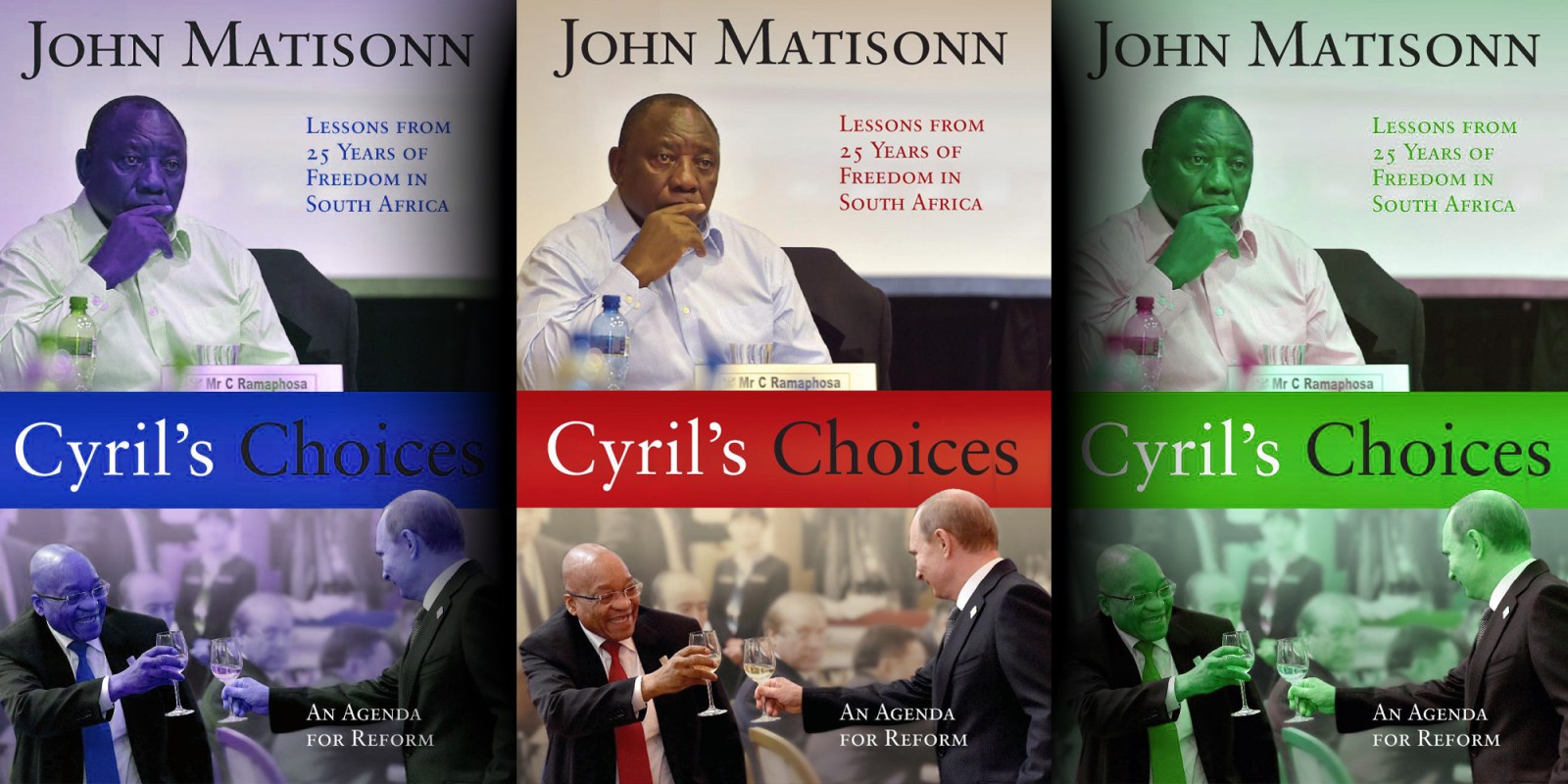 ‘Cyril’s Choices: Lessons from 25 Years of Freedom in South Africa’ spells out the choices facing President Cyril Ramaphosa. In this extract, author John Matisonn looks at SA’s lost opportunities, lessons to be learnt and offers possible solutions for the country’s economic malaise.

State Capture was worse than a crime. It was a mistake.

It drew attention away from the local and global threats and opportunities we ignore at our peril. Those currents are gathering force.

Cyril Ramaphosa’s South Africa faces economic stagnation, the climate crisis, 4IR, a hunger crisis in neighbouring Zimbabwe, and the rising influence of Russia and China while the Western-dominated world order is unravelling under the populist distractions of Donald Trump and Brexit.

The African continent is in the early stages of an expected population explosion, especially north of the equator. Increasing terrorism outbreaks are a risk, and American soldiers and Russian mercenaries are expanding their footprint southward.

Russian mercenaries are as close to South Africa as Mozambique. Facebook has concluded that “entities associated with” the Russian oligarch known as Putin’s chef, who provides catering services to the Russian government, Yevgeny Prigorzhin, interfered in the domestic politics of eight African countries: Mozambique, Madagascar, the Central African Republic, the Democratic Republic of Congo, Ivory Coast, Cameroon, Sudan and Libya.

In the 25 years of South African freedom, the world saw the biggest upliftment of poor people into the middle class in history. The countries where it happened include South Africa’s partners in BRICS – China, India, Brazil and, in a different way, Russia.

In the last 10 years, growth rates in a few African countries have been among the top 10 in the world. That is mostly resource exploitation, but some have adopted effective growth plans. With the exception of a few years before the global financial crisis, when South African growth was respectable if not stellar, jobless rates rose alarmingly.

Why did we never match the other BRICS countries’ economic growth, job-creation and upliftment of the poor? Why are we beaten by African countries with less advantages than we have?

The problem began before State Capture.

Even in our best years, the policies of the Mbeki years did not produce job-creating rapid growth. President Thabo Mbeki’s economic policies created the necessary conditions of growth, but rapid growth requires more.

South Africa missed two great global economic trends during these 25 years: the information boom of the 1990s and the resource boom driven by China in the 2000s.

The information economy is not to be confused with the Fourth Industrial Revolution (4IR). It’s the Third Industrial Revolution, driven by the convergence of telecommunications, broadcasting and computers. 4IR is the current fad, but South Africa cannot properly capitalise on it without first confronting and fixing its blunders over the Third.

Our political parties need a new toolbox. They need to listen to experts to develop a new vision. There is a temptation to look for rescue from somewhere else, like China, but the solutions are at home.

There are lessons to be learnt from the Asian tigers, even though South Africa will not be able to move into low-wage manufacturing as they did because our wage structure is higher. Asia has lessons about the way the state led the economy in tandem with business towards new growth sectors.

During State Capture the South African state was repurposed to serve a few families and cronies. Now politicians argue over the role of the state. One side argues that the state is the problem and privatisation the solution; the other that state-owned enterprises could create jobs simply by hiring and procurement. Both solve very little.

The South African state needs to be repurposed, but this time to deliver job-creating rapid, inclusive growth. To do this the state needs to understand the next drivers of growth. We cannot take any more intellectual short cuts.

Every country that pulled most of its citizens out of poverty into the middle class in few generations did so in the same way – by rejecting the simple formula popular in the 1990s, that fiscal restraint, free trade and a bit of privatisation would do the job. This formula can produce stability and slow growth, but never the rapid growth achieved by the Asian tigers, the Marshall Plan for Japan and Germany, the rise of the United States or the rise of England before the Industrial Revolution, or even the Italian city states so successful during the Renaissance.

Each of these was willing to use tariffs or subsidies to protect embryo industries, and in each the government tried hard to understand the sectors that would produce the best growth and backed them fervently. The state is often poor at choosing winning companies, but its far more important and enduring role is to pick sectors.

In the first 25 years of freedom, growth and job creation peaked at around 5%. At that time Brazil, Russia, India and China did better by several percent. Each country’s details differ, but the bottom line is that the state applied its best minds to choosing sectors most appropriate to the right kind of growth. They answered the question: what will be the growth drivers of each economy?

That is in the past and we have to look to the future. Just as the Information and Resource booms produced good results for those that embraced them, government has to discover the sectors that will produce job-creating rapid growth. Here’s a hint: the Fourth Industrial Revolution is not the panacea Davos Man says it is.

In choosing sectors to support, emphasis should be on manufacturing and on cities, because that is where income-enhancing growth takes place.

Fixing the information economy still needs to be a priority. Multiple studies show its potential for job-creating growth remains significant. Delays come from the lack of spectrum including digital migration, political interference in regulation and the failure to develop robust and independent regulators.

A second priority needs to be the green economy. South Africa currently has signed international treaties promising carbon reduction, but these are not aligned with industrial policy – they are in different departments. Aligning them offers huge potential. Currently, Russia is signing up nuclear energy deals across the continent, while China is cornering the African market in renewables. Again, multiple studies indicate African renewable energy is in the early stages of a major trend.

Elected representatives and Cabinet members who are seriously determined to fix the jobs crisis could profitably start there. In the long run, it’s the sectoral drivers of job-creating growth that will save us, if we can support them without trying to capture them. DM

John Matisonn is a veteran journalist and author of the critically acclaimed God, Spies and Lies: Finding South Africa’s future through its past. Cyril’s Choices is published by Missing Ink.