‘This chrome is our only hope’ 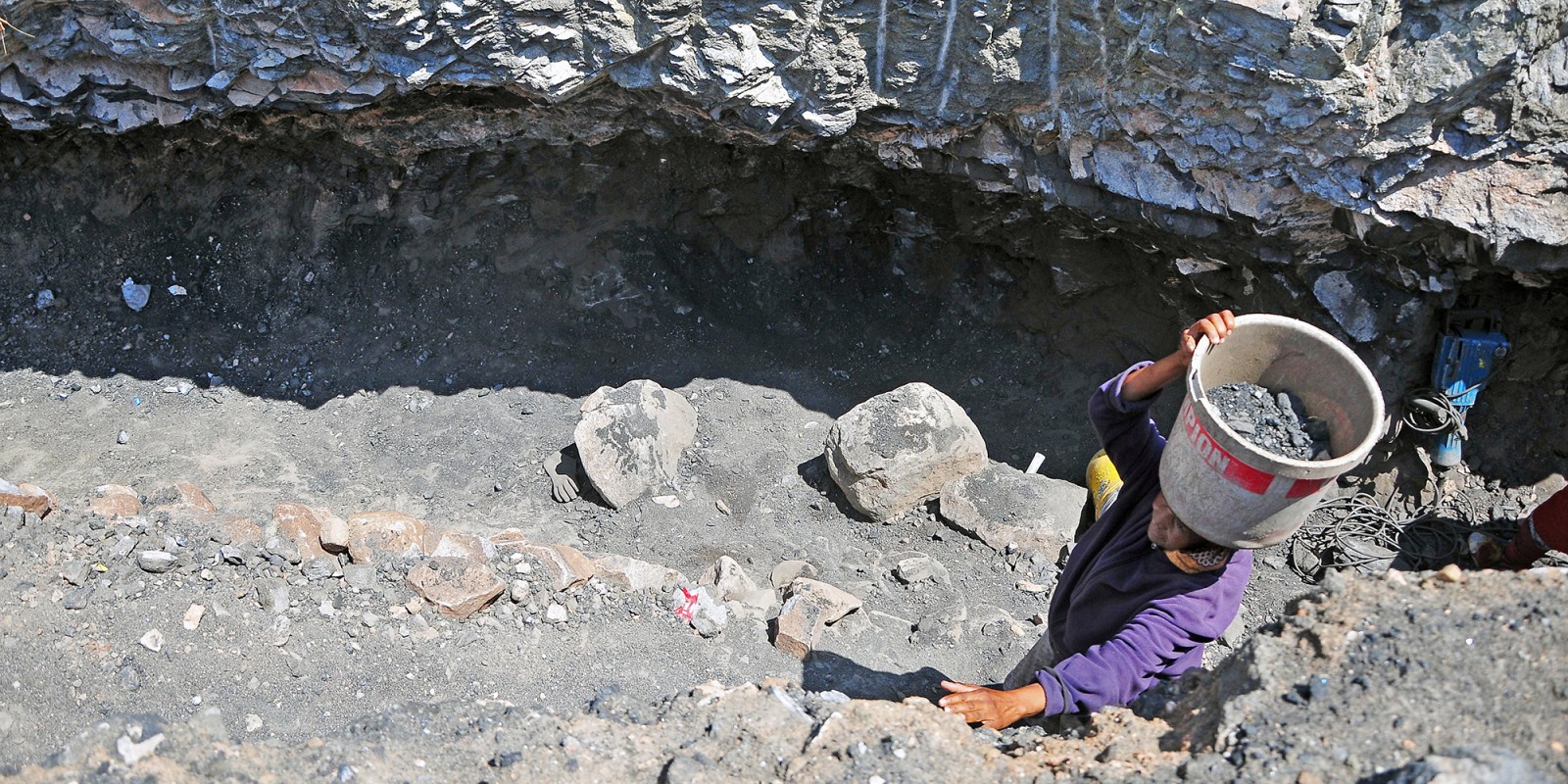 Women artisanal miners carry buckets of ore mined by male artisanal miners in Atok in Limpopo. They earn about R600 for sorting a pile of chrome from ore. (Photo: Lucas Ledwaba / Mukurukuru Media)

Limpopo’s unlicensed artisanal miners brave police raids and falling rocks to beat poverty as the government remains indecisive about the issuing of permits.

Suzan Makgareetsa was killed when a column of rocks collapsed and buried her alive. She was among dozens of unlicensed artisanal miners eking out a living on various informal chrome mine operations in the Sekhukhune area of Limpopo.

“She was unemployed. She went there with the others because they were hungry. Everyone goes there because they make some money,” says Petros Mmampholo Teka about his daughter’s gruesome death.

Teka is the kgoši [traditional leader] of the Babina Tlou Ba ga Teka Traditional Authority. His home is in Mogolaneng, a village in the Atok area under the Greater Tubatse municipality. It is located along a stretch of mountains bearing the sought-after chrome metal mineral in the Sekhukhune district of Limpopo.

The 90km belt which stretches from the villages in Atok in the north-west to Steelpoort in the south-east, is a battlefield between small scale artisanal miners, large scale industrial mines and the authorities.

Artisanal miners earn as much as R17,000 to fill up a truck with the mineral – but this paltry amount is shared among many people along the value chain.

Teka says so far this year three artisanal miners including his daughter have been killed in rock falls in the village. Another person was murdered in what is suspected to be a turf war between different groups of artisanal miners.

“He was killed like a chicken when we were only trying to make a living,” says Nora Makgolane, an artisanal miner whose son Danny Mohlala was killed in Atok on 17 February. His alleged killers are out on bail of R1000.

The scramble for chrome has extended beyond the hills right into the large village homesteads and in dangerously close proximity to houses.

In the dusty streets of the village, piles of shiny black rocks are lined up along fences awaiting buyers. Yellow-coloured earth moving machines and tipper trucks can be seen parked in various households and streets.

Elsewhere on the edge of the village more than a dozen trucks are parked on an open field, waiting to transport chrome. The area has been the subject of sustained raids by the SAPS and the department of mineral resources and energy. The SAPS referred enquiries on the matter to the department of mineral resources and energy which referred the enquiry back to the SAPS. Teka says he is powerless to stop unlicensed miners like his late daughter because of the dire economic situation in the area.

“They are my people and they are starving. If I tell them to stop [mining], they will gather here demanding food. Where will I get food to feed all these people?” asks Teka helplessly.

Up in the hills above the village, Matheba Malapane emerges from a pit where he shovelled ore out into the surface. Around him, dozens of men and women are hard at work with shovels, hammers, chisels and rock drills powered by roaring generators.

“Hunger forced us to come and work here. We have no food and we are struggling. There are no jobs, that is why we try here so that our children can be okay,” says Malapane, 69.

According to the continental mining portal Africa Mining IQ, South Africa delivered half of the world’s production of chrome ore in 2017 and has the capacity to produce 4.2 million tonnes of ferrochrome a year at an estimated R42-billion in GDP per annum.

But men like Malapane operate on the margins of this massive economy, risking their lives to feed on crumbs in the land of their birth.

The shutting of the Bokoni Platinum Mine in Atok and the Twickenham mine by Anglo American Platinum has plunged the area into a desperate economic depression as many relied on these mines for jobs.

The artisanal miners are operating illegally without mining permits and lay the blame for their illegal status on the government’s failure to approve their applications.

“They must allow us to work because we are struggling. We are [not] stealing. We work in fear. The police are harassing us. We always run. We are surprised when they say we are stealing while this is our land. This land belongs to our chief,” Malapane says.

Even women like Jane Baloi toil in the heat, carrying buckets of mined ore from the trenches up to the surface where it’s then sorted according to its level of quality.

“It is very hard work. That thing [chrome] is heavy. We are facing this problem because of hunger,” she says pointing at the deep lines edged on to her neck.

In its General Household Survey for 2018, Statistics South Africa noted that social grants were the second most important source of income (45, 2%) for households after salaries (64, 8%), and the main source of income for almost one-fifth (19, 9%) of households nationally.

Baloyi’s six unemployed children are also in the chrome mining hustle in the area.

“All this started just after the closing of the mine [Bokoni]. There is no use for us staying home. Each cent we have we put together and get something [to eat] at home. We can buy maize meal,” she says.

In a desperate attempt to curb the illegal mining the Babina Tlou baga Teka traditional authority on whose land some of the mining is taking place wrote letters to the office of President Cyril Ramaphosa and Minister of Mineral Resources and Energy, Gwede Mantashe requesting intervention in the matter.

In separate letters, they asked for a meeting “to discuss the issues of illegal mining”. The issues include “the effect of illegal mining on the health, environment and safety of our surrounding communities, the continuous fatal injuries due to this illegal mining practices and the issuing of mining permit and license”.

The Department of Mineral Resources and Energy acknowledged receipt of the request in an email dated 19 November saying the traditional authority’s request “has been referred to the Mineral Regulation department for initial engagement and a report to be submitted to the Minister to schedule the appointment”.

The Teka community, through a company called Khupe Radimpe, applied for a mining permit on one of the farms, Jachtlust, in 2017. But the department has yet to resolve the application. Khupe Radimpe director Elias Mareme Matheba, who is also a resident of Mogolaneng where the mining is taking place, says the illegal mining was hampering plans to empower the community through a formal mining operation.

The company together with the traditional authority has made another application under Section 104 of the Mineral and Petroleum Resources Development Act which allows communities to apply for mining licences and partner with an established company.

However, the department says in response to written questions that the application was rejected because mining company Samancor already owns mining right on the same farms and that the community has been provided with a reason for the rejection of their application.

Matheba says a survey on the farm Jachtlust has indicated there are chrome deposits that could last at least 100 years.

“If we work we could be able to hire 3,000 people and end this suffering [in this area]. We could add more. In the long term we want to go underground once we have entered into a joint venture with a big company with experience,” he says.

Part of the land owned by the Babina Tlou ba ga Teka is the subject of a court battle between mining giants Samancor and a Russian company who are in dispute over control of mining rights. The area was previously mined by Samancor who were awarded the rights before the political changes of 1994.

The mine was shut down and the area never rehabilitated and now artisanal miners are mining the remaining dumps.

“We can’t stand by and watch companies from Russia fighting over our land. Our people are hungry. They want to work,” says Matheba.

Rakgadi Kgomo, a spokesperson for the Babina Tlou baga Teka Traditional Authority, blames the situation on government’s failure to empower the youth in mineral-rich areas such as Mogolaneng by not providing them with skills training and permits to enable them to operate legally as artisanal miners.

She says the government should set up colleges in mining communities to equip the youth with relevant skills that would help them make a living in the industry.

“This mineral is like bananas on a mountain. If people are hungry and they see bananas on the mountain you can’t tell them they can’t have it because they don’t have a licence. If they are hungry they will go for it,” says Kgomo.

The department says in instances where illegal mining is being undertaken on areas where no one holds the right or permit for the same mineral, it advises the illegal miners to follow the normal application process as prescribed in terms of the Mineral and Petroleum Resources Development Act and National Environmental Management Act. MC