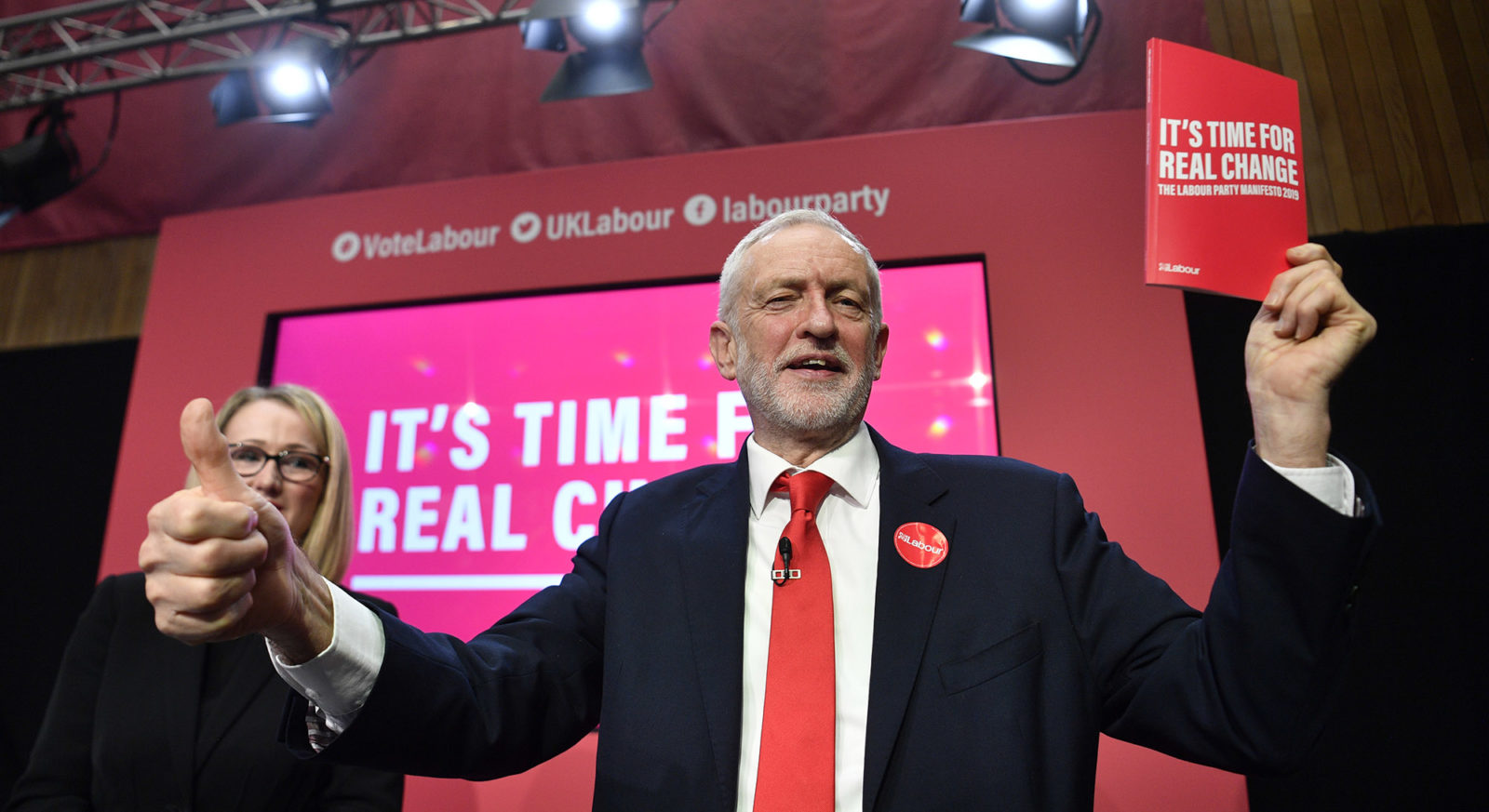 The 2019 Labour Party manifesto outlines a range of policies affecting the UK intelligence services. Five particular pledges are likely to be strongly opposed by the British military and intelligence establishment, even if they do not actually threaten national security.

Britain’s general election debate has focused on concerns over national security since the terrorist attack on London Bridge on 29 November.

The ruling Conservative Party reacted by publishing a campaign advert that depicted Prime Minister Boris Johnson as “tough on terrorists” versus Labour opposition leader Jeremy Corbyn whom they branded as “soft”.

This move followed years of high-profile claims by figures in Britain’s intelligence community that Corbyn as prime minister would be a threat to national security. Sir Richard Dearlove, the former head of Britain’s external intelligence service MI6, recently warned on the front page of the Mail on Sunday: “Do not even think of taking the risk of handing this politician the keys to No 10.”

As prime minister, Corbyn would have control over the UK’s intelligence agencies, including the authority to access any of their files past and present.

The 2019 Labour Party manifesto outlines a range of policies affecting the UK intelligence services. Five particular pledges are likely to be strongly opposed by the British military and intelligence establishment, even if they do not actually threaten national security.

1: “Establish a judge-led inquiry into our country’s alleged complicity in rendition and torture, and the operation of secret courts.”

Holding such an inquiry is likely to pose a direct challenge to MI6 and Dearlove particularly, who ran the agency from 1999 until 2004, when it was deeply involved in extrajudicial snatching of suspects — termed “renditions” — especially to Libya and Guantanamo Bay, the US military base on Cuba.

In the years after 9/11, officers from MI6 and its domestic counterpart MI5 were involved in 600 cases of prisoners being mistreated, often at Guantanamo. Whitehall also supported the snatching of 31 suspects, according to an official report. Some of these incidents are still the subject of police investigations and could lead to criminal charges.

The most well-documented case is that of Abdul-Hakim Belhaj, leader of the Libyan Islamic Fighting Group which fought against Muammar Gaddafi. MI6 passed details of Belhaj’s location to the CIA which then kidnapped him and his pregnant wife Fatima Boudchar, and delivered the pair to Gaddafi’s torture chambers in 2004.

The couple’s ordeal only came to light in 2011 when Gaddafi was overthrown and Human Rights Watch discovered incriminating faxes from MI6 in his spy agency’s headquarters. Some British judges had actually learnt of the rendition much earlier when it was whispered to them behind locked doors at a secret court – the Special Immigration Appeals Commission – but they were barred from telling the public.

2: “We will implement every single recommendation of the Chilcot Inquiry.”

Dearlove, as head of MI6, and Sir John Scarlett, as chairman of the Joint Intelligence Committee (JIC) from 2001 to 2004, worked closely with then-prime minister Tony Blair in the build-up to the 2003 invasion of Iraq.

Sir John Chilcot’s inquiry into the war, which was published in 2016, was heavily critical of both Dearlove and Scarlett, for their failure to warn the public that intelligence about Iraq’s supposed weapons of mass destruction and links to Al-Qaeda was not as reliable as Blair claimed.

However, this rebuke did not stop Dearlove raising concerns about Corbyn, who had opposed the invasion of Iraq. Dearlove claimed in 2018 that Corbyn had “enthusiastically associated himself with groups and interests which I would not say were the friends of the British nation”.

In response, Labour’s shadow chancellor, John McDonnell, noted that Dearlove had been “strongly criticised as the head of an organisation whose intelligence took us into that war so I think he should have a bit of humility about the judgements he makes about individuals and others in the future”.

A key recommendation in the Chilcot report was that MI6 and JIC intelligence assessments should not just be reviewed by the prime minister. Chilcot said: “When assessed intelligence is explicitly and publicly used to support a policy decision, there would be benefit in subjecting that assessment and the underpinning intelligence to subsequent scrutiny, by a suitable, independent body, such as the Intelligence and Security Committee”.

This chimes with another pledge in Labour’s manifesto, to strengthen the powers of this backbench Parliamentary committee.

3: “We will ensure [intelligence] agencies are accountable and strengthen the powers of the Joint Intelligence and Security Committee. We will constrain the right of the prime minister to suppress publication of committee reports.”

If Britain’s intelligence agencies were truly “accountable”, as set out in Labour’s manifesto, this would be a sea-change in democratic oversight and the public may learn of further inappropriate activities by the UK security services. In Britain’s current opaque governance system, the public is largely reliant on media leaks or occasional lawsuits to learn about such wrongdoing.

In the run-up to the last UK election in 2017, Britain was rocked by a series of terrorist attacks, including the Manchester Arena bombing and the London Bridge killings. The Manchester bomber Salman Abedi was on an MI5 watchlist and had fought with an MI6-linked militia in the war in Libya in 2011 as Britain sought to overthrow Gaddafi. One of the London Bridge attackers, Khuram Butt, had previously been monitored by MI5.

Manchester’s coroner has been refused permission to scrutinise the MI5 files in public, which could shine a light on how the agency failed to stop a bombing that killed 22 people.

The UK parliament’s Intelligence and Security Committee – which has some powers to scrutinise MI5 and MI6 – published a report about both attacks, but 399 parts of it were redacted and only shown to the prime minister. Another report by the committee, this time into rendition, contained 282 redactions.

Files leaked by Edward Snowden in 2013 revealed that Britain’s eavesdropping agency, the Government Communications Headquarters (GCHQ), was conducting a mass interception of citizens’ internet traffic under a project named Tempora, which the European Court of Human Rights said violated the right to privacy.

Since 2017 there has been a new regulator of the intelligence agencies named the Investigatory Powers Commissioner’s Office (IPCO), but even this body was kept in the dark for three years by MI5 about its unlawful bulk surveillance programme.

4: “We will ensure the powers exercised by the security services are proportionate and used in accordance with human rights … We will require judicial warrants for undercover operations and retain the Mitting Inquiry into undercover policing… We will establish public inquiries into historical injustices including blacklisting and Orgreave”.

Corbyn and his shadow home secretary, Diane Abbott, were both monitored by the Metropolitan Police Special Branch, which worked closely with MI5, at various stages of their political careers. Peter Francis, a former Special Branch officer, said he “personally collected information” on Corbyn and Abbott while he was infiltrating anti-racist activist groups.

Revelations by Francis and others forced Theresa May, when she was home secretary, to set up the Mitting inquiry into undercover policing. However, many of the officers have been granted anonymity and victims have called for the chairman of the inquiry to stand down because of his history in the British establishment (he was chairman of the opaque Special Immigration Appeals Commission from 2007 to 2012). If Labour won the election and Abbott became home secretary, she could strengthen the inquiry.

Abbott would also have access to MI5 files about herself and Corbyn, as well as those in Corbyn’s inner circle such as Andrew Murray, a former member of Britain’s Communist Party. During the Cold War, any British communist, even the eminent historian Eric Hobsbawm, was considered subversive and liable to being watched by MI5.

Abbott has also repeatedly pledged that as home secretary she would set up a public inquiry into the so-called “Battle of Orgreave” in 1984 when police attacked striking miners. If the terms of reference are broad enough, this could shed more light on how extensively MI5 bugged phones used by trade unionists during the strike.

An inquiry into blacklisting could also reveal the extent to which MI5 was involved in barring trade unionists from jobs in the construction industry and civil service.

5: “Hold a public review into Britain’s role in the Amritsar massacre.”

In 1984 the Indian army raided the Sikh faith’s holiest site – the Golden Temple in Amritsar – killing hundreds of people in a botched attempt to evict dissidents holed up inside.

In 2007, a former Indian counter-terrorism official, Bahukutumbi Raman, revealed in his memoirs that two British MI5 officers had performed a reconnaissance mission at the temple by posing as tourists, and fed back to the Indian prime minister about the situation inside.

In 2014, the author of this article found evidence that a British special forces officer had given operational advice months before the botched raid. The UK government has refused demands from the Sikh community to hold a public inquiry.

However, if such a probe was held under Labour, this could expose the extent of British intelligence and special forces involvement in the affair.

All of the above are sensitive episodes for an intelligence community unaccustomed to public scrutiny. DM

Phil Miller is staff reporter for Declassified UK. He tweets at @PMillerinfo

There are cowards among us

Violence puts future of the University of KwaZulu-Natal under threat