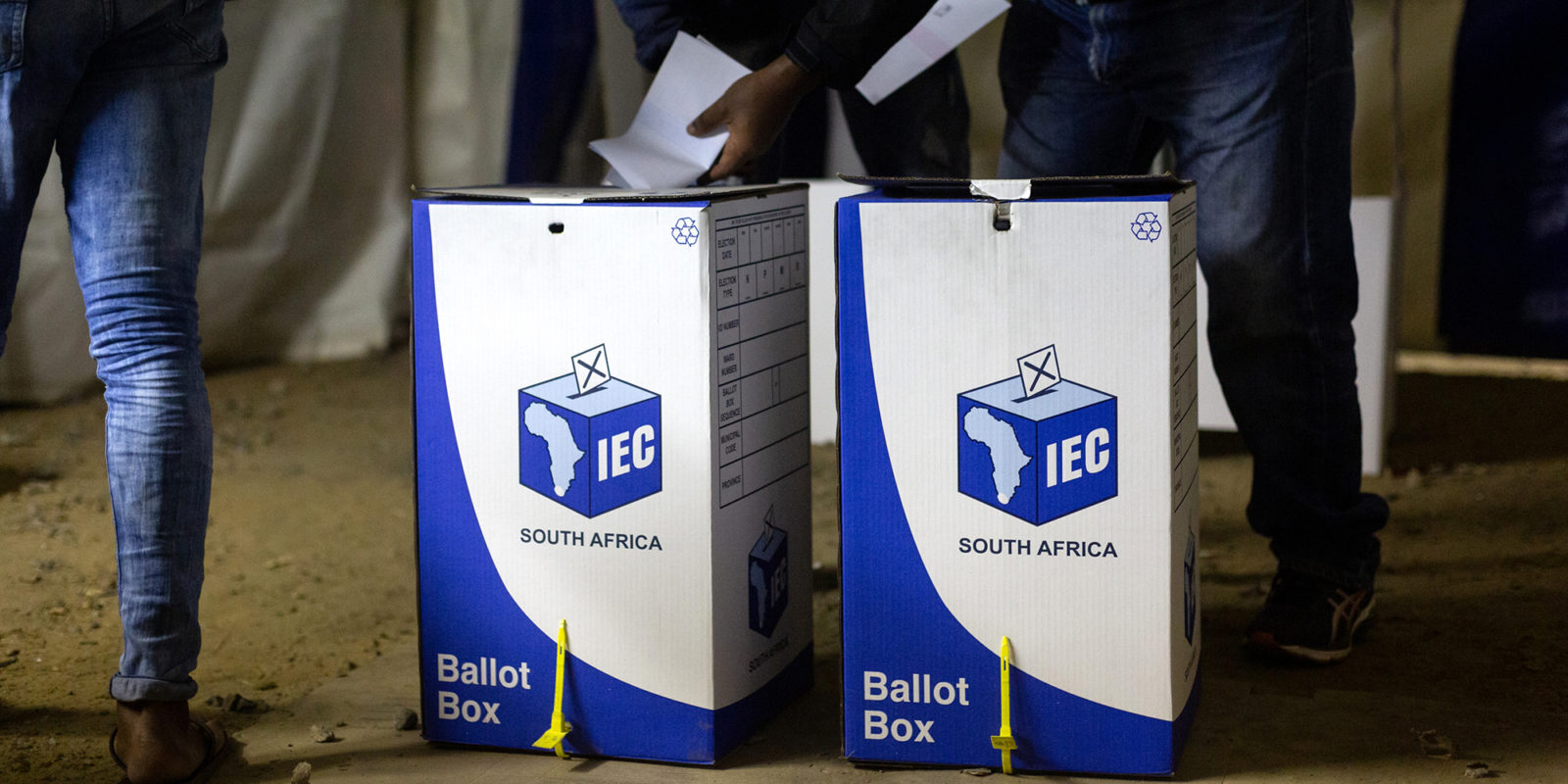 A man votes in the evening at a polling station in Alexandra, Johannesburg, South Africa, 08 May 2019. EPA-EFE/YESHIEL PANCHIA

On a dramatic day in local government politics, when the African National Congress regained the mayoral chain from the Democratic Alliance in the City of Johannesburg, the largest municipality in the country, the ANC had solid performances in three of the four by-elections in the last round of them for 2019. This included a key hold in Jozini in KwaZulu-Natal. The DA also retained a competitive seat in Knysna.

KwaJobe is situated in the basin surrounded by the Mkhuze game reserve and iSimangaliso Wetland Park. Ward 3 has rural villages and a tribal authority. Jozini municipality includes the towns of Jozini and Mkhuze, and is the gateway to a number of provincial game reserves and parks. It is part of the Umkhanyakude District in the far north of the province.

This is a battleground district which leans to the ANC because of the outsized support for the party in the Umhlabuyalingana municipality. In 2016, the ANC pipped the IFP at the post in Jozini. However, the party came two seats short of an outright majority. In 2018 the ANC lost a ward in Jozini to the IFP, giving the IFP an additional seat in the council. The IFP with the backing of the DA and the EFF now had 21/40 seats in the council.

If the IFP had won the by-election contested here, they would have been able to ensure more relative stability as they would not have been dependent on the support of one of its backers, either the DA or the EFF. The IFP would have fancied their chances after their strong win in an Mtubatuba by-election the week before.

The ANC not only held on to the ward, but won it by a larger margin in the by-election. This win sent a strong message to the IFP that the party has a good chance of winning the municipality from them in 2021.

The IFP was able to win the Ekudilikeni Primary School in KwaJobe. In 2016 the ANC beat the IFP by 7 votes, in the by-election the IFP won by 22 votes. The problem for the IFP was that even though the turnout percentage was highest in this district, there are not enough votes in this district to threaten the ANC majority in the ward.

Over 40% of the voters in Ward 3 are in the Izineshe School District. The IFP won this district in 2016 by 144 votes, and their 2016 performance here was why the party came so close to beating the ANC in the ward. The ANC were able to flip the district by winning it by 27 votes. It was a significant shift which ensured that the ANC not only held the ward, but increased their percentage vote share in the ward.

At Mozi Primary School, the ANC won by 31 votes, in 2016 the IFP just had their nose in front, winning here by a single vote. At Mabandleni High School, the ANC beat the IFP by 7 votes, overturning the 58 majority the IFP garnered in 2016.

These voting district shifts show how the ANC was able to increase a slender 128 vote majority to 224 votes.

uMzumbe is part of the Ugu District, an ANC stronghold in the province.

In November, the IFP made serious inroads into the ANC firewall of Ward 6 in uMzumbe, around High Flats. The IFP grew from 8% to 38%, while the ANC fell from the high watermark of 89% to 61%.

The IFP again made inroads into the ANC’s support in uMzumbe. The party came close to doubling their support, as the ANC’s support fell for the second consecutive time within the space of a month in this municipality.

While the ANC had comfortable holds in 6 of the 7 voting districts, the IFP was able to win the Frankland Community Hall voting district off the ANC. In 2016, the ANC won the district by 152 votes, in the by-election the IFP won by 99 votes. An impressive shift to the IFP.

uMzumbe is not under threat in 2021, the ANC will remain in power here, but the party does risk losing a number of seats if the IFP can continue with these strong showings. The ANC currently has 30/39 seats in uMzumbe, with the IFP occupying 6 seats.

Hornlee is a coloured suburb on the outskirts of Knysna, next to the N2 road which links Knysna with Plettenberg Bay. Knysna is part of the Garden Route Municipality.

The DA emerged as the largest party in the municipality after the 2016 local government elections, but fell one seat short of winning an outright majority. The party was affected by factionalism within the caucus, and in a stunning development a part of the DA caucus worked with the ANC and opposition councillors to elect Mark Willemse from the DA as mayor. Willemse, a DA mayor, works with an ANC speaker, and a mayoral committee which comprises of ANC councillors and a councillor from the Knysna Unity Congress (KUC).

This has resulted in the current council composition of the ANC (8 seats) + DA-Willemse faction (2 seats) and the KUC (1 seat) having a majority. The DA (8 seats) and Congress of the People (COPE)-1 seat and the African Christian Democratic Party (1 seat) are in opposition. There are 21 seats in the council.

In order for the DA to have any chance of winning back the municipality, they had to hold Ward 11. In a significant development before the by-election, COPE decided not to contest the by-election. Hornlee is one of the last pockets of COPE support in South Africa. As recent as the 2019 elections, the party came second here on the provincial ballot.

The ward has two voting districts. The ANC and EFF made big inroads around Sunridge Primary School. DA support there fell from 39% to 31%, while the ANC surged from 10% to 30% and the EFF went from 4% to 18%. It is clear that the ANC and the EFF were the main beneficiaries here of COPE not being on the ballot. In 2016 COPE got 31% in the district. Regional party-Plaaslike Besorgde Inwoners (PBI) will be satisfied with their 10% in the district. The DA’s majority in the district fell from 78 votes to 5 votes.

The DA’s stronghold in the ward is at the Hornlee AFM Koinonia Church. The DA got 53% of the vote here in the by-election, up from the 49% in 2016. The ANC doubled their percentage support in the district, growing from 13% to 27%. The EFF garnered 9% of the vote, from a low base of 1%. The ANC and the EFF again benefitted most from COPE not contesting, as COPE got 27% of the vote in this district in 2016. Turnout at Hornlee Church was 10% higher than turnout at Sunridge Primary. This was beneficial to the DA.

The DA will now aim to remove Willemse as a councillor, and win that seat in a by-election.

Ndlambe comprises towns such as Port Alfred, Bathurst, Kenton-on-Sea and Alexandria. It is part of the Sarah Baartman District.

Most voters in Ward 9 live in the Nemato township of Port Alfred. The ward also includes the suburb of Station Hill, a DA stronghold. The DA did not contest the by-election, which meant that with only two parties on the ballot, both parties had an opportunity to increase their support in the ward.

The ANC romped home here, winning 97% of the vote. It was another convincing win for the party in the Eastern Cape. This is the province where the ANC continues to reinforce its dominance.

It must be noted that turnout was only at 9% in Station Hill. While turnout was a respective 27% and 40% in the two Nemato voting districts.

No seats changed hands in the last round of by-elections for 2019. The ANC had a strong night, bar for the uMzumbe decline; the party made a big statement in Jozini and Ndlambe and made good advances in Knysna. It was a mixed night for the IFP, the ANC moved further away from them in a winnable ward in northern KwaZulu-Natal, but at the same time they continued to show impressive growth in the southern part of the province.

The DA retained their seat in Knysna, in the context of another recent by-election in Knysna, this was a credible result for the party, but they will not be happy that they were unable to attract former COPE voters in the ward. The EFF struggled again. The only bright spark for the party was to be found in an area not traditionally known for EFF support – the coloured suburb of Hornlee on the outskirts of Knysna in the Western Cape. The party will be happy that by-elections move away from the coast and move northwards and inland in early 2020. DM