Wild Wild South: Running gun battles in cities in broad daylight are not normal – don’t get used to it 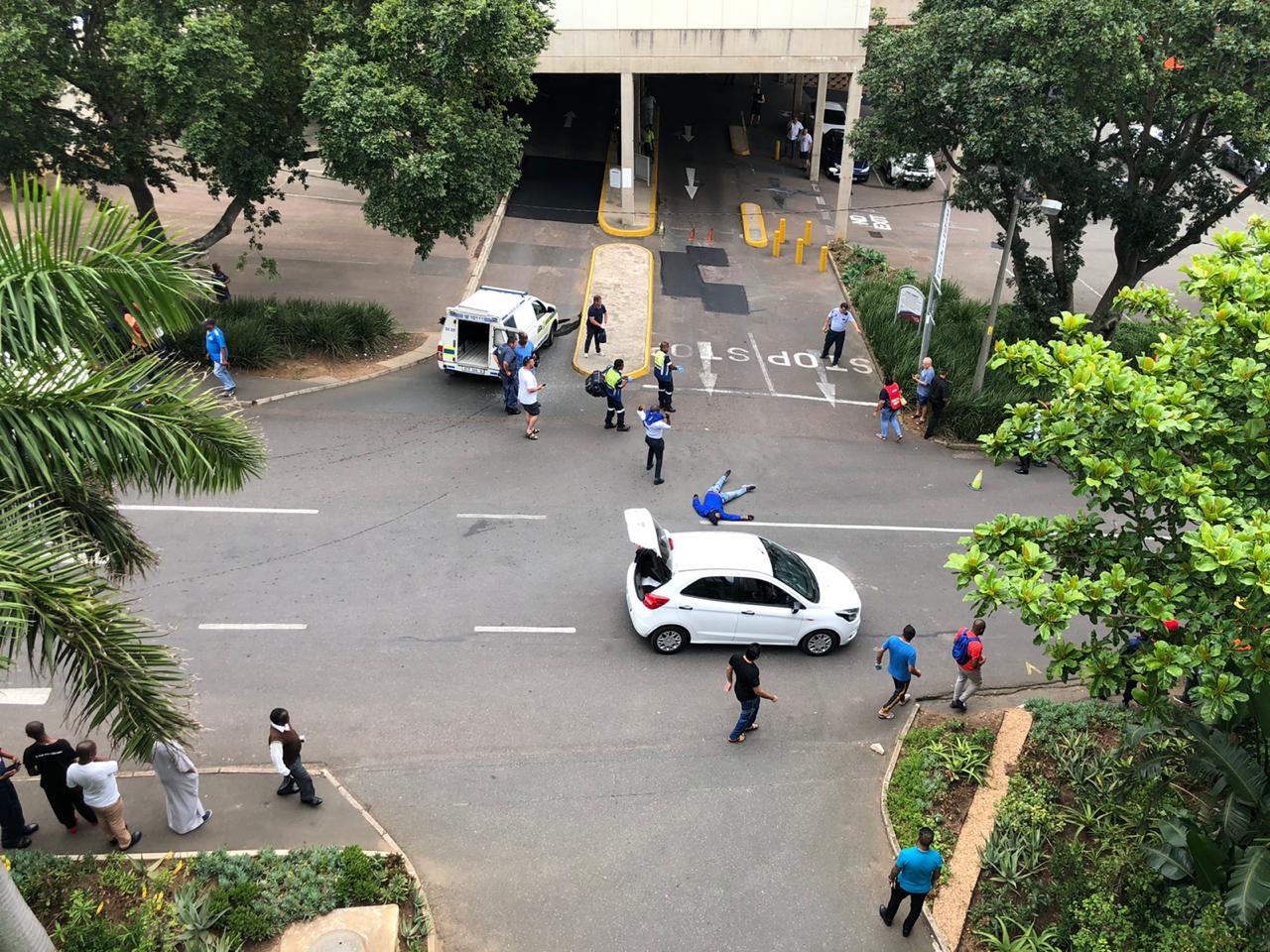 The aftermath of the Westville shootout on 28 November, 2019. Photo: SUPPLIED.

While SAPS leadership might have congratulated two lone police officers who engaged in a gun battle with seven heavily armed robbers who hit a Westville, Durban mall on 28 November, we still need answers as to whether the gunmen were in fact dangerous, escaped convicts on the run.

The filmed clip of the two Westville SAPS officers engaged in a heavy gunfight with armed robbers lasts about 58 seconds, during which at least 50 shots echo through the city’s streets while alarms screech and a few motorists drive by, seemingly oblivious of, or inured to, the drama.

The shootout on Durban’s streets early on a weekday morning was not unusual. In fact, these wars between criminals and law enforcement agencies have become commonplace, as everyday as the gunshots that ring out over the Cape Flats in Cape Town.

The day before the Westville shootout, Gauteng police fatally wounded one suspect and arrested four others during a skirmish on the R21 in the early hours of the morning. The following day, five people were killed and nine others injured in a gun battle in Centurion.

Welcome to the wild, wild South.

But the Westville shootout requires deeper scrutiny, as Daily Maverick has reliably learned that at least one of the robbers, in fact the man who was shot dead, was a convict who had escaped from “a high-security prison and was on the run for quite some time”.

There was no mention of this in National Commissioner of Police, General Khehla Sitole’s statement lauding the two Warrant Officers “for their bravery, which was caught on camera”.

The statement, released by Sitole’s spokesperson Brigadier Vish Naidoo, set out how “three suspects in balaclavas allegedly forced their way into the post office and demanded Sassa money from one of the staff members and started assaulting her when she said the money had not arrived at the post office”.

The robbers had then made a dash for “an awaiting getaway bakkie which had another four occupants in it. The two police officers and the suspects spotted each other, resulting in a shootout between them”, said Naidoo.

“The suspects, armed with AK47 rifles and pistols, drove away in the bakkie as they continued to shoot randomly as well as at the police officers. Several vehicles including the police vehicle as well as buildings were damaged in the process after being riddled with bullets.”

Sitole said that the police officers, “despite being outnumbered and overpowered, remained relentless throughout the gun battle and fatally wounded a 34-year-old suspect while the other suspects managed to escape. It is believed that other suspects may have also been wounded during the shootout”.

Recovered at the scene was a Z88 pistol, with the serial number filed off.

“The response displayed by our two police officers was exceptionally patriotic and selfless, to say the least. I personally called and congratulated both colleagues this morning for their unwavering determination and highly commendable bravery. I will also be visiting them in the very near future,” said General Khehla Sitole.

The “steadfastness of both members towards those ruthless criminals” epitomised, said Sitole, “the stance of the SAPS towards criminality in this country”.

And while the two officers are certainly to be commended, what if some of the robbers, in fact, did escape from state custody to find themselves footloose and fancy-free on the streets of South Africa?

If they had not got out or had been speedily apprehended in the first place, the entire incident might not have taken place at all.

And so it was, armed with our evidence, that Daily Maverick sought to establish whether the dead man or any of the others who are still on the run, were indeed escaped convicts.

At first, we approached the Department of Correctional Services, requesting it determine, first, whether the suspect was indeed an escaped convict and if so, how and when this happened, what investigation had taken place and which measures were deployed to attempt and re-apprehend him before the crime spree.

Our query was forwarded by Correctional Services to the office of the Minister of Justice, Ronald Lamola, which at first appeared to be an indication that the matter was being treated with the seriousness and professionalism required.

Then things went a bit pear-shaped. Lamola’s spokesperson, Crispin Phiri, responded quickly, undertaking to provide answers. Phiri had at first been under the impression that convict/s might have escaped on the same morning as the heist and correctly reported back that no escape had been reported that day.

Daily Maverick then forwarded our information that the men had, in fact, been on the run for “quite some time”.

Phiri inquired whether Daily Maverick knew the identity of the alleged escaped convict or had any further details which could help resolve the query. We informed him that we did have information but were not going to supply it.

Surely it would not take long, we suggested, considering (we hope) records are kept, to determine when and how the breakout occurred from any high-security correctional services facility in the country?

We also suggested Phiri should connect with SAPS who would surely have the name and ID of the dead man which could, in turn, be fed into some sort of system we assume exists, to check against reports of escapes – should these be noted, which we hope they are.

By Wednesday 4 December, more than a week later, Phiri could still not confirm or deny our information that at least one of the armed robbers was an escaped convict.

Meanwhile, SAPS has appealed “to anyone who may have any information on the whereabouts of the remaining suspects, some of whom may be seeking medical attention, or even crime in general, to furnish us with such information via our SAPS MySAPSApp or our Crime Stop number 086 00 10111. All callers may remain anonymous and information will be treated with strictest confidence.”

If our information is correct and the robbers are indeed escaped dangerous criminals, someone needs to account for this serious lapse.

Shootouts between law enforcement officials and criminals in South Africa’s city streets cannot be allowed to become so normalised and every day that we simply ignore them, do not probe further, or force officials at all levels to do their mandated jobs. DM