Minister Motshekga, you have failed us, say learners 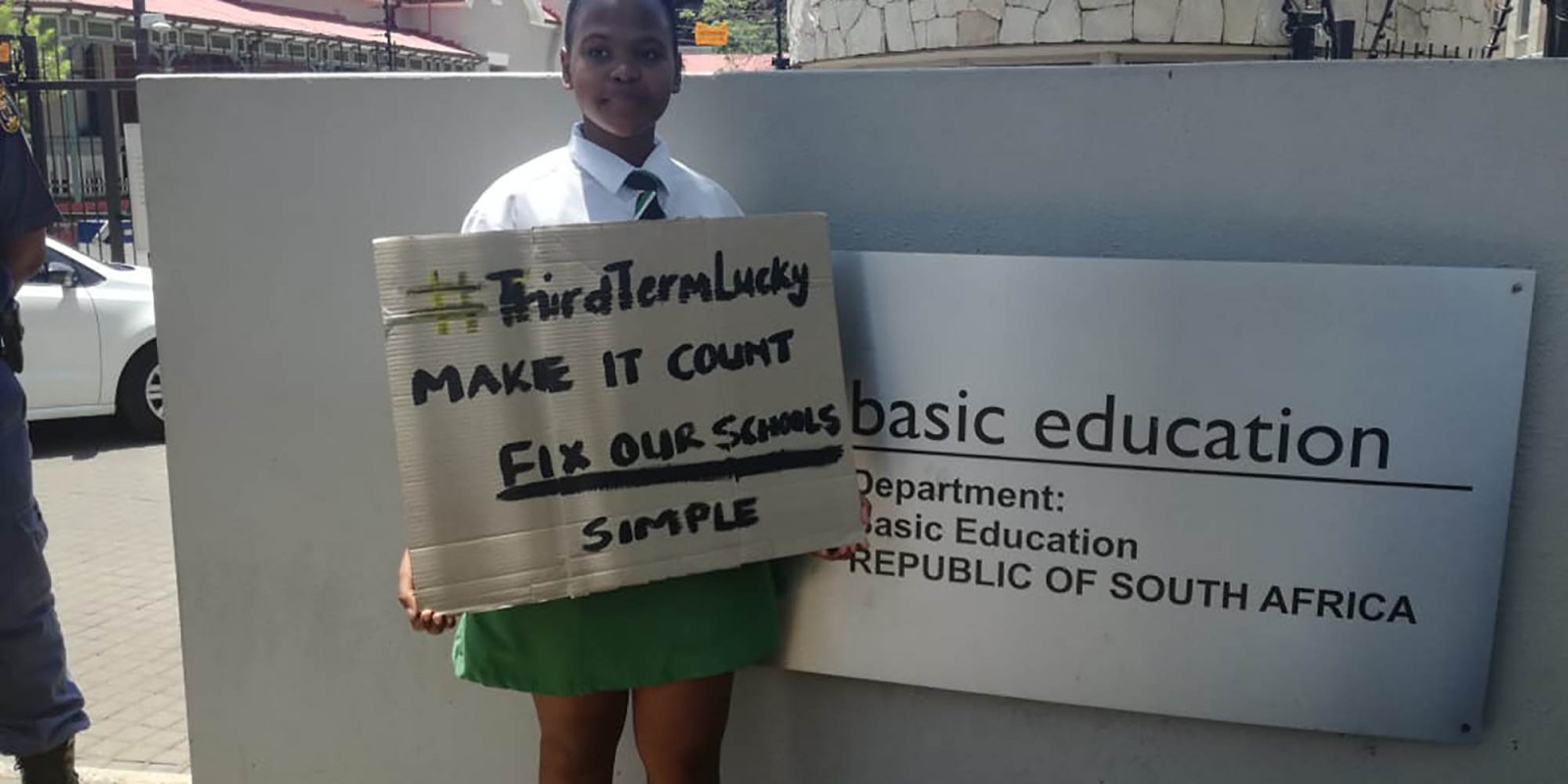 Charlotte Maxeke pupil Yolanda Sinelizwi Magugu outside the Department of Basic Education. Yolanda is part of a group of student activists across the country called "Equalisers" and together they are calling for the eradication of poor infrastructure in their schools (Photo: Lelethu Tonisi)

Learners from a number of Gauteng schools have appraised the basic education minister’s recent performance – and she has not fared well.

Gauteng pupils stood outside the Department of Basic Education building in Pretoria on Tuesday 3 December demanding that minister Angie Motshekga step up and do her job of eradicating dangerous and antiquated infrastructure in their schools.

Learners and Gauteng members of the Equal Education (EE) group called the Equalisers, were representing schools from across Gauteng and SA to conduct a performance appraisal of Motshekga’s first six months in her third term of tenure.

The Equalisers is a movement that fights and advocates for learners’ rights in basic education. Members present in Pretoria on Tuesday were from schools in Ivory Park, Tembisa, Kwatsaduza, Daveyton, KwaThema and Soweto in Gauteng. They want the minister and stakeholders of basic education to step up, do their work, and be accountable.

They highlighted key performance areas (KPAs) specified in the People’s Performance Contract which was handed to the basic education ministry in June when Motshekga was sworn to office.

According to the assessment by the Equalisers, the minister achieved none of those demands.

Lawrence Manaka, a 16-year-old pupil from JB Matabane Secondary School in Ivory Park, said they still use mobile classes, which are not conducive to teaching and learning.

“For instance, when it is raining, we can’t see in class when there is no electricity because it gets dark. Our toilets are in a bad condition and we don’t have proper electricity and water supply, so it’s basically not a school to us according to norms and standards,” he said.

He said they don’t have access to the first-class education they deserve because they are in public schools.

Yolanda Sinelizwi Magugu, a 17-year-old pupil from Charlotte Maxeke Secondary School in Tembisa, said they would also like better sanitation, which is one of the campaigns they are running in Gauteng.

“We run various campaigns in various provinces. In Western Cape, we have the safety campaign, in KZN it’s scholar transport whereby learners are requesting transport to take them to school since they walk about 5km to school, [it’s a] minimum norms and standards campaign in the Eastern Cape, and then water and sanitation in Limpopo,” she said.

She said they want the minister to act immediately.

“The PPA has not only shown what was expected from the minister and her department but has also shown how they have failed us as they have achieved almost nothing. We need to start seeing progress and responsibility being taken.”

Johan Visser, on behalf of the department, received, signed, and accepted the memorandum which was handed over by the learners and said the department would prioritise the demands. DM