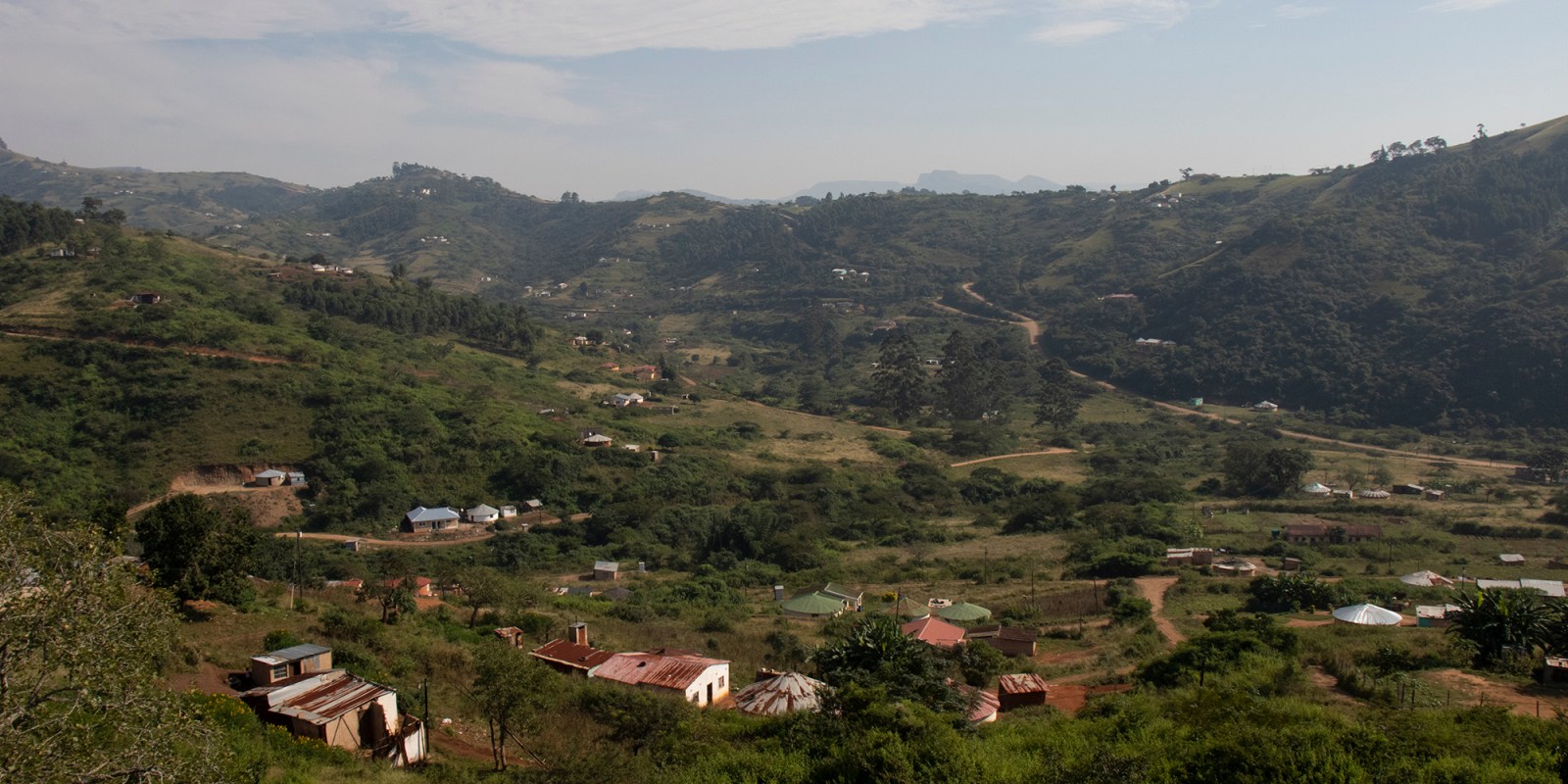 A view of Engonweni, Ndwedwe, in KwaZulu-Natal from Ngwoneni Primary School on 8 May 2019. (Photo: Aisha Abdool Karim)

A scramble for a piece of pristine coastal land by the rich and wealthy has plunged poor families who have lived off the fertile ground for generations into a life of fear and dispossession.

The OnguMnini village near uMgababa on the KwaZulu-Natal South Coast has become the latest to be engulfed by this scourge in which traditional leaders sell off land and force their subjects out to make way for rich property developers and aspiring homeowners.

The OnguMnini village has seen a high influx of wealthy business people and developers who are targeting the region to build holiday homes, residential apartments and tourist resorts.

Commonly known as uMnini, taken from the isiZulu word umnikazi (owner), the area is surrounded by breathtaking views of the Indian Ocean and rolling green hills. The area also boasts fertile soil ideal for commercial and subsistence farming. Villagers believe that this geographical feature has now become a curse and turned their lives upside down.

At the centre of the residents’ woes is the alleged illegal sale of their land allegedly by the local chief inkosi Phathisizwe Luthuli, the leader of the Luthuli traditional authority, with his indunas who are accused of hounding residents off their land, selling off plots and allegedly channelling funds to themselves and the Ingonyama Trust.

The traditional authority has also been accused of pursuing those who are seen as being vocal in challenging the status quo. At least two land rights activists in the area have died under mysterious circumstances.

It is widely believed that the activists were assassinated after approaching the courts seeking legal relief, wanting their land to be brought back after it was sold without their consent.

Following their deaths, villagers formed a crisis committee and approached human rights non-profit organisation, Legal Resource Centre (LRC), requesting it to intervene and lay criminal charges against the members of the Luthuli traditional council and the Ingonyama Trust Board.

“It has been five years now and nothing much has changed. We have been turned into outsiders in the land of our forefathers. The chief together with his traditional council continue to sell off our land. Those of us who are opposing this inhumane act are hunted down like animals. We continuously live in fear of being killed,” says community activist Bhekabantu Mkhonto.

Mkhonto says he previously served as an induna in the village but he was stripped off his position after questioning the affairs at the traditional authority.

“After I raised concerns about the illegal sale of the land that belonged to the locals, I was barred from attending council meetings. I had also taken the local chief to task about the whereabouts of funds which were collected during the sale of land. This did not settle well with the traditional council. I was concerned that poor people and women lost their land because they were viewed as easy targets. So, because of my stance, I was chased away and told that I was no longer an induna,” says Mkhonto.

Mkhonto’s version of events is corroborated by Msawakhe, a former induna in the village. Like Mkhonto, Luthuli, who is the nephew to the local chief, says he was vilified for his stand against the sale of the communal land without consulting landowners. He was also removed from the traditional council.

“My viewpoint was that the only land that can be leased out to property developers was the vacant land. I then proposed that the rental fees should be put under Umnini community trust so that the funds can be used for community development initiatives. The residents had also supported the idea of creating an ecotourism hub in the village to create jobs for locals. But this was shot down by the traditional council,” says Luthuli.

Luthuli says the Umnini tribal land did not belong to the Ingonyama Trust Board as this was private land administered by the Umnini community trust. The village stretches about 1,200 hectares along the coast.

The Ingonyama Trust is an entity established prior to the 1994 democratic elections to administer the land traditionally owned by the Zulu people. King Zwelithini KaBhekuZulu is the sole trustee to the entity. The legitimacy of the entity has come under scrutiny in recent years.

Secretary of the Umnini community trust, Celulwazi Dubazane, says that earlier in 2019 the court issued summons to the local chief together with the Ingonyama Trust board, instructing them to stop the illegal sale of communal land.

“They did not heed this call by the court and instead took a business-as-usual approach. We recently approached the department of land reform for their intervention. It is our long-held view that any money paid as a result of land sale in the area should be kept by the community trust and used to develop the community and not be channelled to Ingonyama Trust,” said Dubazane.

He said the illegal sale of land had affected villagers who rely on subsistence farming as a way of alleviating poverty.

“These people are poor and the land is the only source of relief for them as they plant crops to feed their families. They also sell vegetables to locals and in turn receive the much-needed income,” says Dubazane.

Dubazane with other villagers are also calling for full implementation of the recommendations by Ingqwele consultancy which was investigating the shenanigans in the village. Ingqwele is a forensic firm which was appointed by then KZN MEC for Co-operative Governance Nomusa Dube in 2015.

It sought to probe the alleged illegal sale of communal land and the fraud allegations levelled against the chief of the Luthuli clan and members of his traditional council.

According to Dubazane, both the national and provincial government did not implement the recommendations.

“The consultancy found that the monies were paid into private accounts to individuals in the traditional council and Ingonyama Trust. It subsequently recommended that bank accounts of those implicated be frozen and criminal charges instituted. This has not happened,” says Dubazane.

However, induna Sandakahle Chiliza, spokesperson for Luthuli tribal council, disputes that they had taken people’s land and sold it off to the highest bidders.

“These people who are calling themselves activists are disgruntled because they were stripped off their positions as indunas. There is no land that is leased in the area without consulting the residents. Even then the chief does not take any money for leases; instead, it is directed to the traditional council in order to develop the community. The chief has also expressed his desire to meet with the aggrieved community members and listen to their grievances,” says Chiliza.

Reggie Ngcobo, the spokesperson for the department of land reform and agriculture, said the minister was aware of the problems besieging the Luthuli traditional council. He said the minister had taken a decision to go on a fact-finding mission to find out what were the issues on the ground. – Mukurukuru Media DM

Sandile Motha is a journalist at Mukurukuru Media based in northern KwaZulu-Natal.