Investigators – from the City and beyond – are sniffing at ‘city capture’ deals where the ANC regional boss may be implicated. If he becomes mayor, what will come of those investigations?

Geoff Makhubo will find out on Wednesday if he will finally become Johannesburg’s new mayor, a job he has eyed since before the 2016 local government elections.

Makhubo, who is the chair of the Greater Johannesburg region of the ANC, is the frontrunner for the job; and with the ANC holding 121 seats, the party needs 15 additional votes at most to confirm his position.

His ambition of securing the mayor’s office was nearly derailed twice in the past week: first by the ANC’s provincial executive committee, which reportedly rejected Makhubo’s name; and then by the EFF, who wanted the ANC to select another candidate in exchange for their members’ votes.

The election of the new mayor was supposed to take place on Thursday last week but was delayed because of confusion about what constitutes a majority in the light of one of the seats, previously held by the ANC, being vacant.

However, Makhubo is a divisive figure. Although popular among ANC branches, there are serious questions about an estimated R30-million that his company received from Regiments Capital, a firm deeply implicated in State Capture.

AmaBhungane exposed the payments last year. We detailed how Makhubo’s firm, Molelwane Consulting, was given a 10% cut of a controversial contract Regiments received to manage the City’s sinking fund, a large kitty used to provide for future liabilities.

One of Molelwane’s – and thus Makhubo’s – deliverables was to “maintain… strategic relationships” with the City of Johannesburg.

At the time the contract was signed, Makhubo held no official position in the ANC or the City. But when Makhubo was elected – first as ANC regional treasurer and then the City’s member of the mayoral committee (MMC) for finance – a serious conflict of interest arose.

By 2011, Makhubo’s company was receiving a 10% cut of a contract that he, as MMC for finance, was tasked with overseeing.

AmaBhungane estimated that between 2006 and 2015, Molelwane Consulting received R30-million.

At the time, Makhubo denied “any suggestion of impropriety or corruption in the relationship between Molelwane and Regiments” and claimed that he had resigned from Molelwane when he was appointed as MMC for finance in order “to deal with real or potential conflict of interest”. (Makhubo’s eight-page response and much of the evidence is available from the amaBhungane Evidence Folder on the amaBhungane website.)

But records from the Companies and Intellectual Properties Commission (CIPC) show that Makhubo did not resign until October 2019. Then, the only remaining member of the close corporation was Makhubo’s mother, who assumed formal ownership of the two-thirds that he had held up to that point.

He also continued to declare his interest in Molelwane in the City’s register of members interests until 2018-19 – while failing to disclose that Molelwane was directly benefiting from one of the City’s most lucrative but controversial contracts. 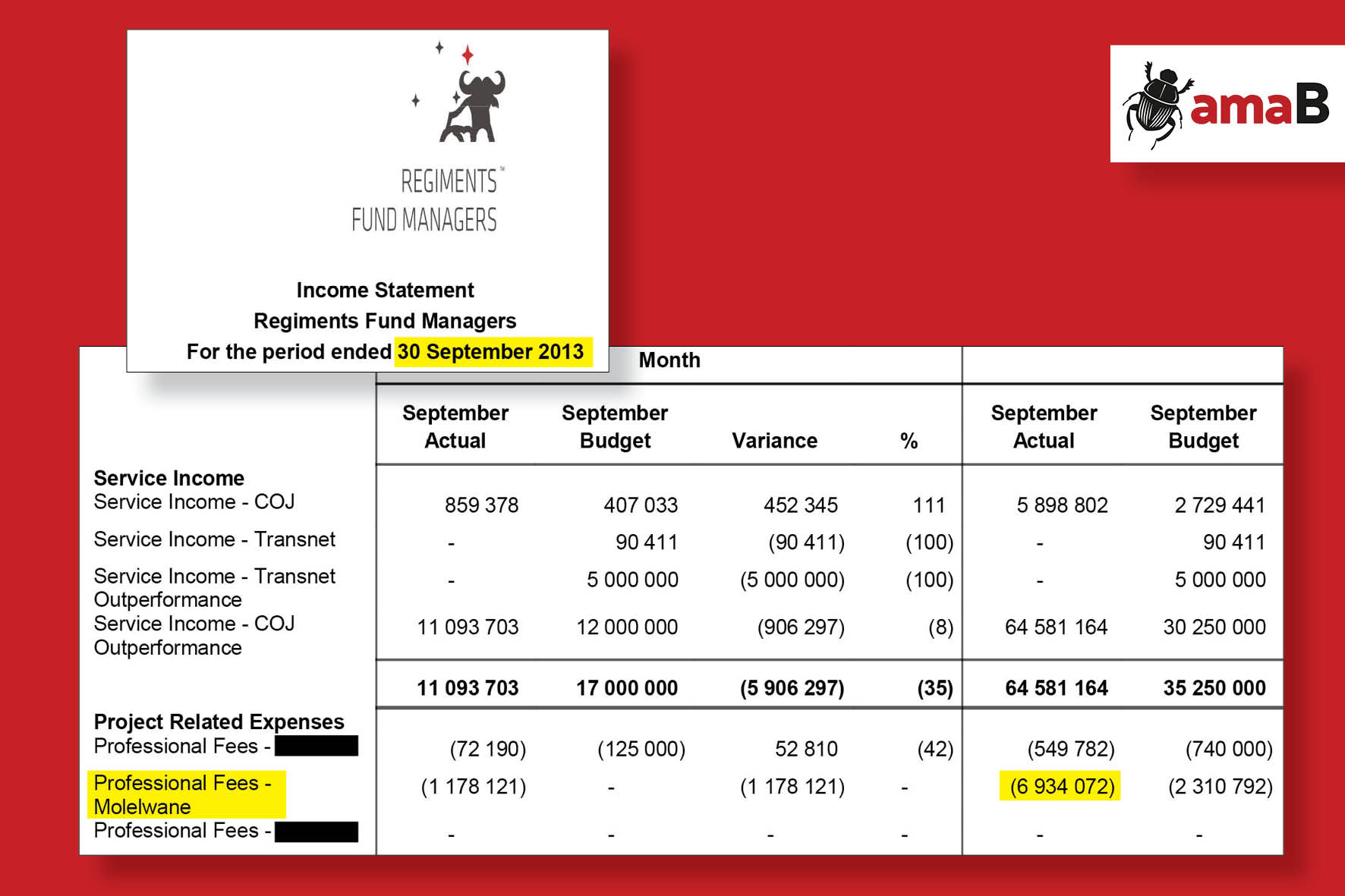 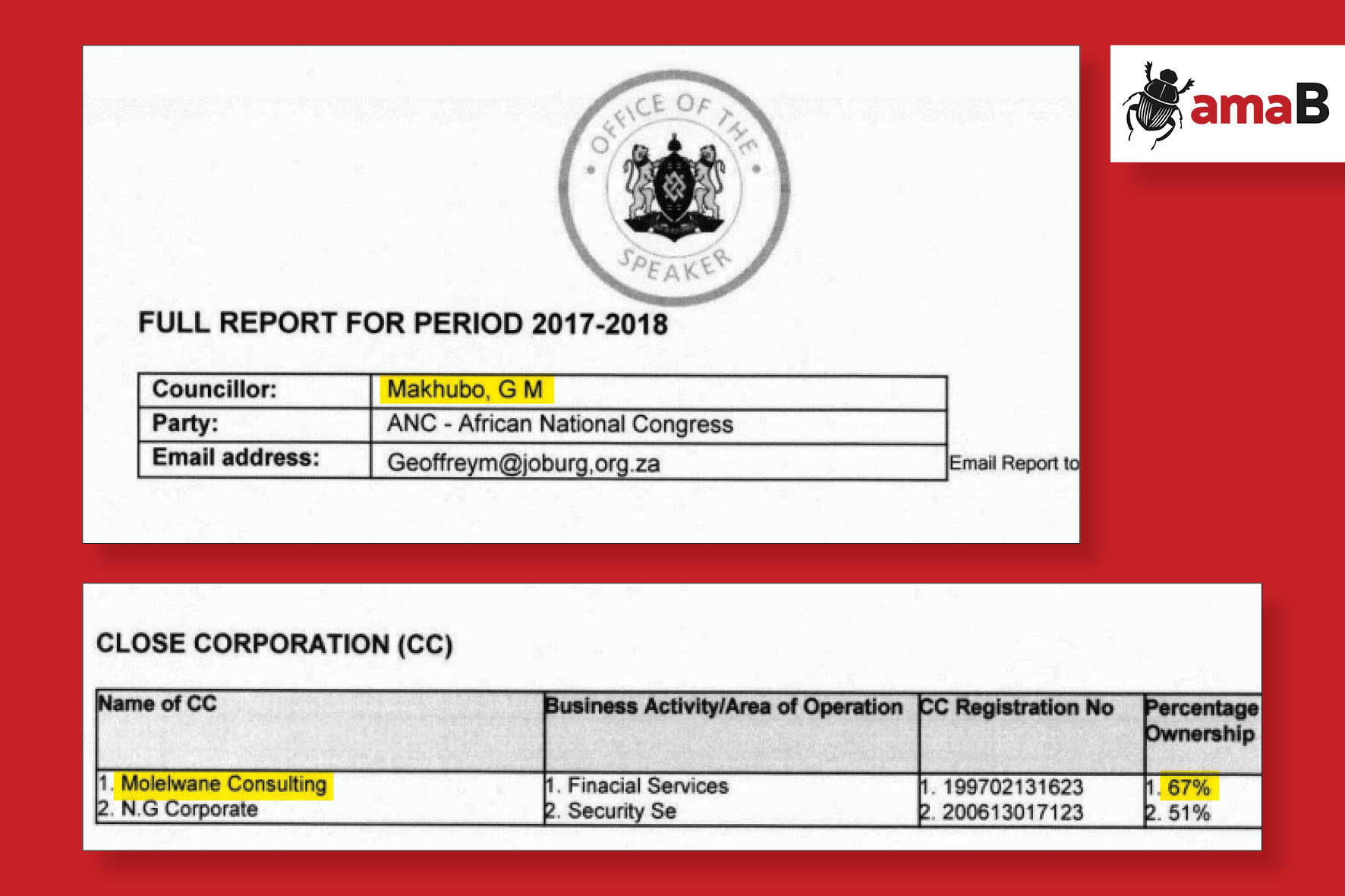 While it is clear that Makhubo was conflicted and must have benefited greatly, the more difficult question is whether he engaged in a quid pro quo with Regiments.

Among the evidence amaBhungane uncovered was a document described as a “CoJ cheat sheet” prepared by Regiments and ostensibly given to Makhubo in November 2010, which included a shopping list of decisions that Regiments wanted the ANC-controlled municipality to execute for the firm’s financial benefit. 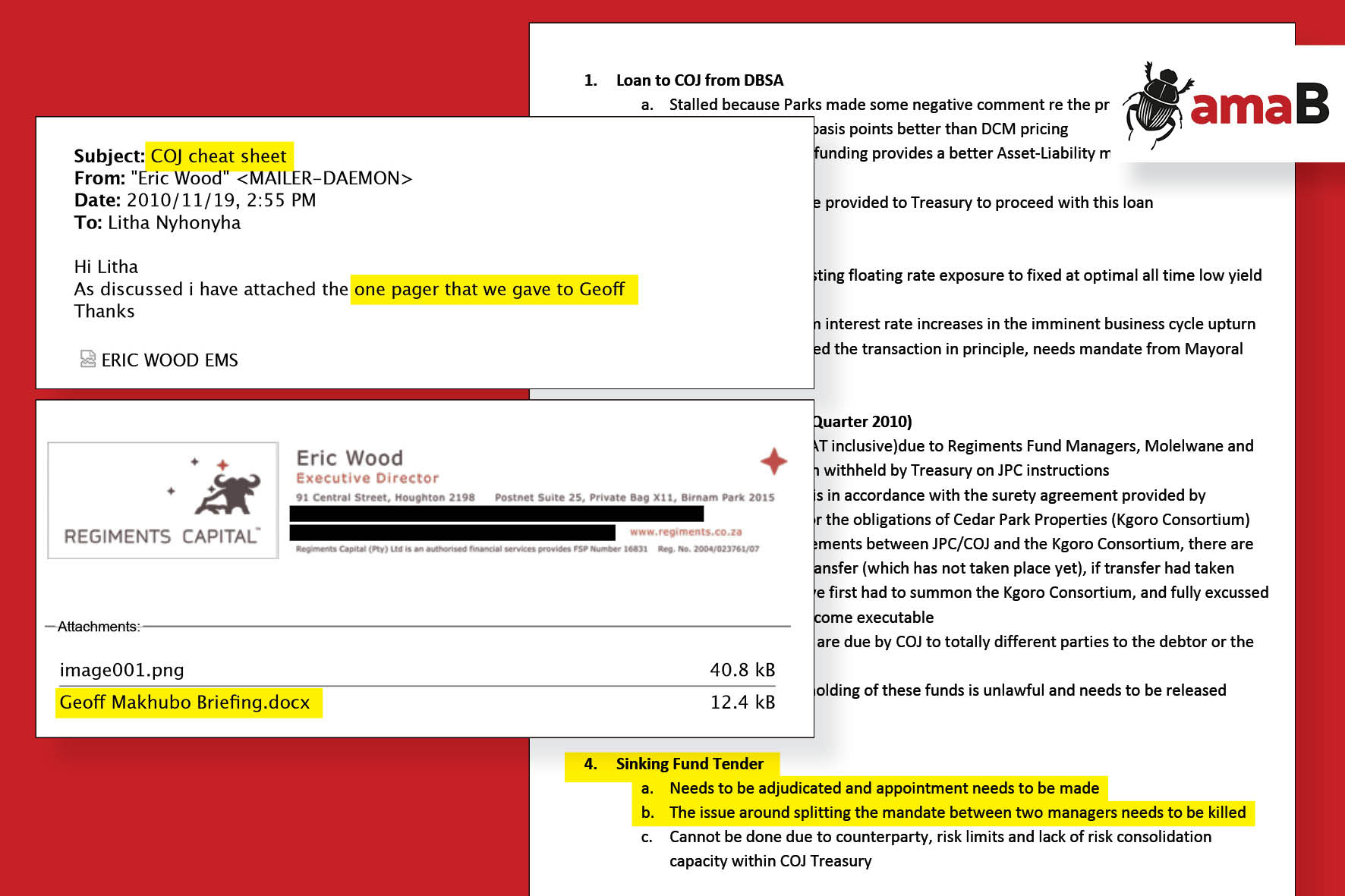 Makhubo, who was regional treasurer of the ANC at the time, denied any knowledge of the document.

The City, under former mayor Herman Mashaba, cancelled Regiments’ sinking fund contract last year and instituted several investigations into Regiments deals with the City while it was under ANC control.

Aside from the sinking fund contract and Molelwane’s 10% cut, amaBhungane understands that the City is also investigating how a Regiments-led consortium acquired the rights to develop the land above the Sandton Gautrain station, as well as several other financial deals – primarily loans and interest-rate swops – executed by Regiments.

Each of these deals has the potential to implicate senior members of the current and former ANC administration, and questions now arise about whether the City, if it returns to ANC rule, will have any appetite to continue these investigations.

On Tuesday last week, Makhubo tweeted that the ANC’s integrity commission had cleared him of any wrongdoing in relation to the Molelwane payments. The basis for its apparent decision is not known. 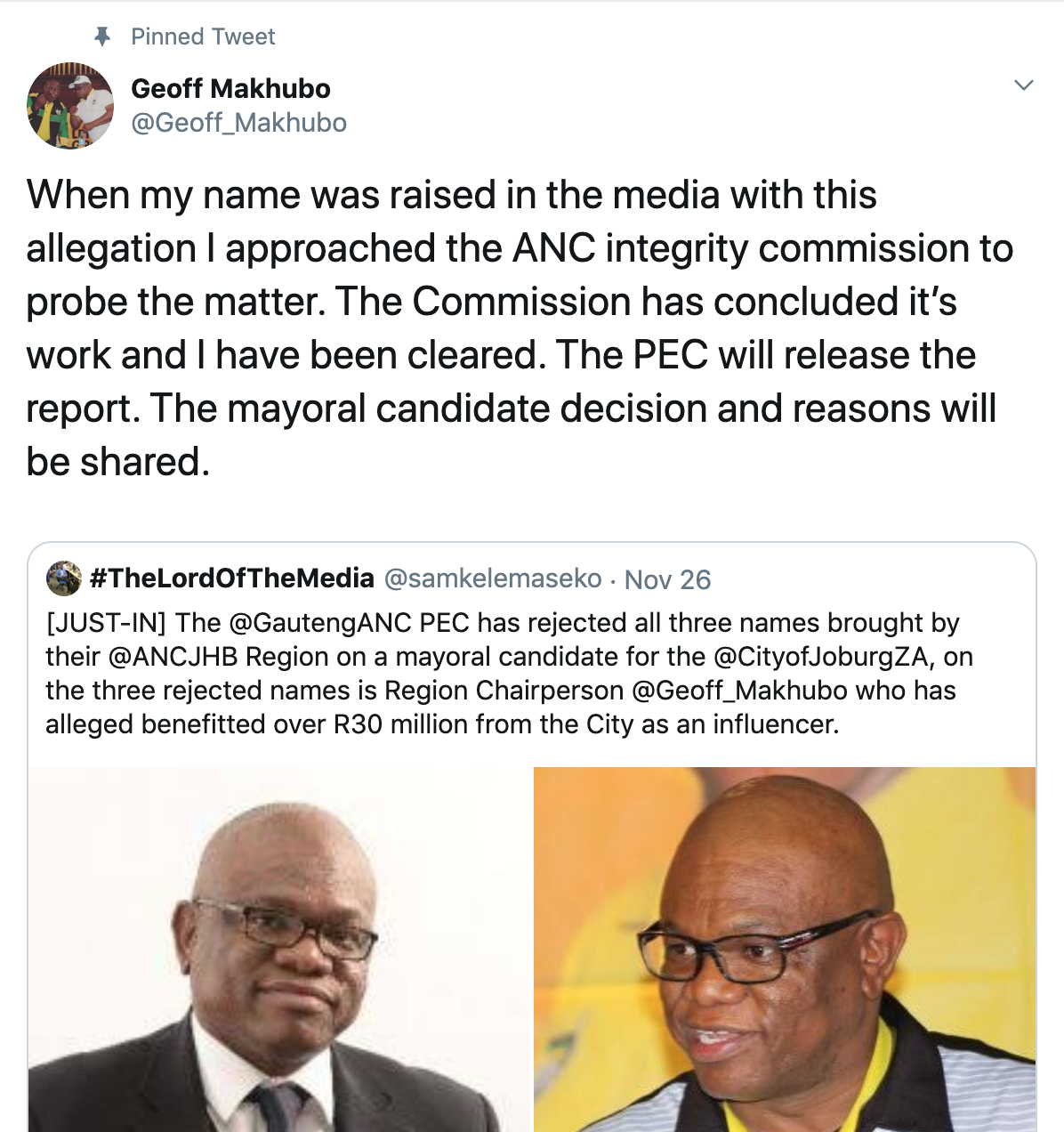 However, these are not the only investigations that are ongoing.

Mashaba opened a criminal case against Makhubo last year relating to the Molelwane payments. The Hawks were investigating but the status is unknown.

The NPA has since confirmed that several terabytes of data – comprising Regiments’ emails, documents and cellphone records – have also been handed over to the State Capture Commission and the NPA.

Although the NPA’s asset freeze is focused on the R1-billion in consulting contracts that Regiments received from Transnet, the records are also likely to contain substantial information about Regiments’ deals with the City of Johannesburg and its relationship with the ANC.

For example, another amaBhungane investigation showed how Regiments ploughed money into the regional structures of the ANC at Makhubo’s request; attempted to cut Makhubo and other ANC members into a deal with Vox Telecom; and engaged political facilitators and fixers in numerous pay-for-play deals.

That a decade of these deals is now open to scrutiny by the State Capture commission and Cronje’s team at the NPA may just give some within the ANC a sleepless night, before Wednesday’s vote. DM