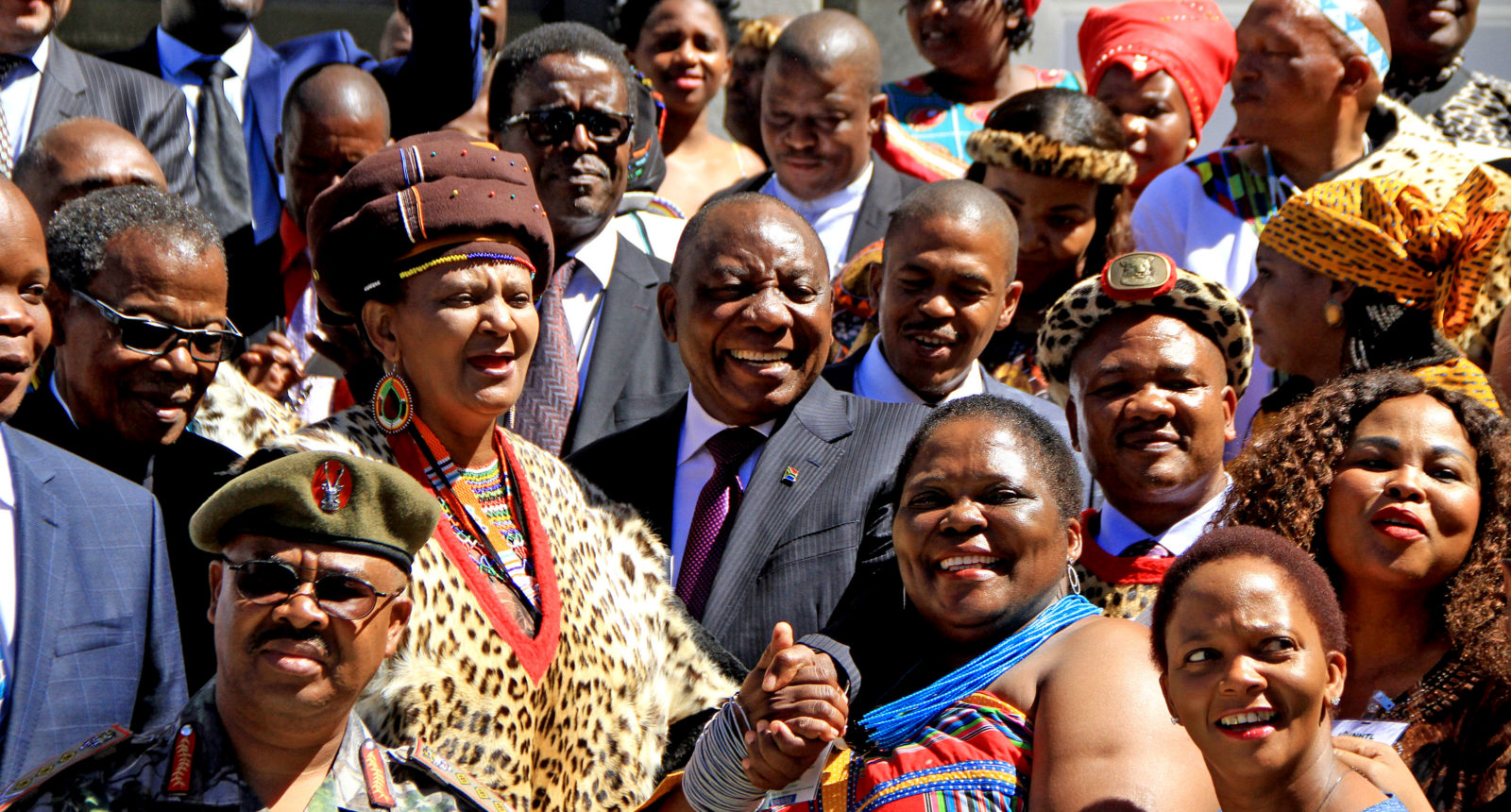 On Thursday, Parliament announced that President Cyril Ramaphosa had signed the Traditional Khoisan Leadership Bill on 20 November 2019, thereby robbing millions of people living in rural areas of fundamental rights and shoring up the power of unelected and predominantly male traditional leaders against women in particular.

For many months land rights activists have been appealing to President Cyril Ramaphosa not to sign the Traditional Khoisan Leadership Bill (TKLB). A coalition, #StopTheBantustanBills, formed by the Alliance for Rural Democracy, even launched a petition earlier this year. However, the opposition was not limited to grass-roots activists. In July, the Nelson Mandela Foundation (NMF) hosted a meeting to discuss the bills that drew together concerned people from across sectors.

At that meeting, there was already a palpable fear of a looming betrayal. To help people understand its implication, the TKLB was contextualised by community activists from Limpopo, the Eastern Cape, Mpumalanga and North West. Each told of their struggles to resist local land grabs, usually being led by an unholy alliance of senior ANC politicians, traditional leaders and mining companies.

Sabelo Dladla from KwaZulu-Natal told of his community’s struggles against Tendele Coal Mining, an open cast anthracite mine that had first been granted  mining rights in 2007. It was recently granted a new licence over 222km² of land in Somkhele, in the Mtubatuba area (despite only applying for 32km²). Sabelo and his comrades from the Umfolozi Community Environmental Justice Organisation thought the Interim Protection of Informal Land Rights Act (IPILRA) requires that communities must consent before their land is taken over for mining. In fact, this requirement was confirmed in the Baleni judgment of the Pretoria High Court in November 2018. But when they tried to find out who had consented on behalf of the community, it turned out to be members of the traditional council, including persons employed by or doing business with the mine.

“We can’t eat minerals,” she said and pointed out that, “although many children across Pondoland are sleeping with hunger, no children are hungry in Xolobeni because we have utilised the land.”

And, like land defenders of old, these activists have paid a price. Sabelo has been threatened and has had to leave his home for periods. In Xolobeni, three people have died over the last decade as they have tried to resist the theft of their lands. Activists like Nonhle now have to have bodyguards.

As they unfolded their unhappy tales I thought Madiba’s unhappy ghost could be heard groaning. But, in yet another sign of the ANC’s growing contempt of civil society, their pleas were ignored.

However, poignant as these stories were, their role that day was mainly to put a human face to the injustice that many feel will accompany the TKLB.

Nolundi Luwaya, the director of the Land Accountability and Research Centre (LARC), gave an overview of how modern land legislation has evolved from apartheid land policy – but ends up looking much the same. Except this time the poor are being disenfranchised in the name of democracy.

LARC’s long battle for rural democracy is a heroic tale of a civil society organisation’s attempts to defend the vision of equality.

In the dying days of the fifth Parliament, ANC MPs rushed through legislation that, activists warned, would rob 18 million rural South Africans of basic democratic rights. The ANC needed to pass these laws to buy the support of traditional leaders whose powers give them undue influence over the votes of millions of people in rural areas.

As a result, in February 2019, the TKLB was passed by both houses of Parliament. For six months it sat on the president’s desk. But now that it has been signed it will settle the boundaries of traditional authorities along “racially inscribed” boundaries of former homelands that were imposed on rural people by the apartheid regime. That’s why activists call it the “Bantustan law”.

Within these boundaries, the TKLB will subject people to the diktat of traditional leaders and traditional councils who now have the right to sign away communities’ land in deals with mining companies. To do so, all that is required is that there be “a prior consultation with the relevant community represented by such council” (the infamous clause 24 of the bill).

Parliament and the president are not in the habit of listening to civil society much these days and may argue that the outcry over the TKLB is activists crying wolf. However, the stories of people like Sabelo Dladla confirm that what the law will do is simply make lawful a bad habit of overriding customary ownership and land rights that traditional leaders have already put into practice. And which in a number of instances the courts have denounced as unlawful.

But there’s more. As if one bad law was not enough the ANC is preparing a double whammy.

In March 2019, the Traditional Courts Bill (TCB) was also passed by eager MPs of the National Assembly. The TCB is now before the National Council of the Provinces, which is going through the motions of public hearings, probably to a predetermined end. When the TCB is passed it will subject the people who now fall under tribal authorities created by the TKLB to traditional courts. This will create a dual system of law in South Africa; one for the second-class citizens of the new Bantustans, and one for the rest of us.

Organisations like LARC warn that people in these areas will not be able to opt-out of this process – women and children, in particular, are likely to suffer from its implementation.

Rural people have much to lose by these new laws. Fertile land, dignity, women’s rights, children’s rights, the right to a healthy environment, food, and perhaps the ultimate sacrifice – the prospect that one day there may be equality. It seems ironic that in a time of much talk about restoring land rights, what is actually taking place is a process to remove what little protections millions of poor people already have.

Significantly, the final report of the Presidential Advisory Panel on Land Reform and Agriculture seemed to recognise this. It advised the president against signing the bill. It too was ignored.

It is for these reasons that rural activists are beginning to despair of being heard by politicians. Constance Mogale, the national coordinator of the Alliance for Rural Democracy (ARD), bemoaned the fact that their best efforts to advise government off this path had been ignored.

“Even though I was in the government-appointed reference group… all of our suggestions were ignored,” she said.

Not surprisingly, some activists sound as if they are giving up on the belief that democratic processes will protect them. Basically, they say there are too many ANC leaders, and their close partners in business, who have either benefited or stand to benefit from the great land grab. It’s a conflict of interest par excellence.

So activists are talking about a new rural revolt and the need to spread organised resistance to land dispossession by communities, learning from the struggles of the Amadiba Crisis Committee and the Pondo revolts of the 1960s before that.

Veteran land rights activist Aninka Claassens calls these laws “the great betrayal” of South Africa’s rural poor. So, at the end of the NMF meeting in July, it was perhaps not surprising that it fell once more to the diminishing band of ANC veterans, the keepers of the values inspired by Oliver Tambo and others, to speak out.

Tim Wilson, who this year celebrates the 50th anniversary of his joining the ANC in 1969, said he was “appalled that the ANC, which fought against tribalism, was pushing these bills.”

“We have not just sold out people in the rural areas” he said, “we have adopted what the apartheid government used to do.”

Both Wilson and Msimang joined calls for Ramaphosa to refer the bills to the Constitutional Court. However, given Ramaphosa’s close relationship with Jeff Radebe and Patrice Motsepe, some of the people activists say have been the greatest beneficiaries of the new apartheid land policy, blood and bounty was stronger than truth and democracy. The veterans are good for the fight against State Capture, but not for deepening democracy. MC