Rubber bullets are high risk when used at close range

Rubber bullets are high risk when used at close range 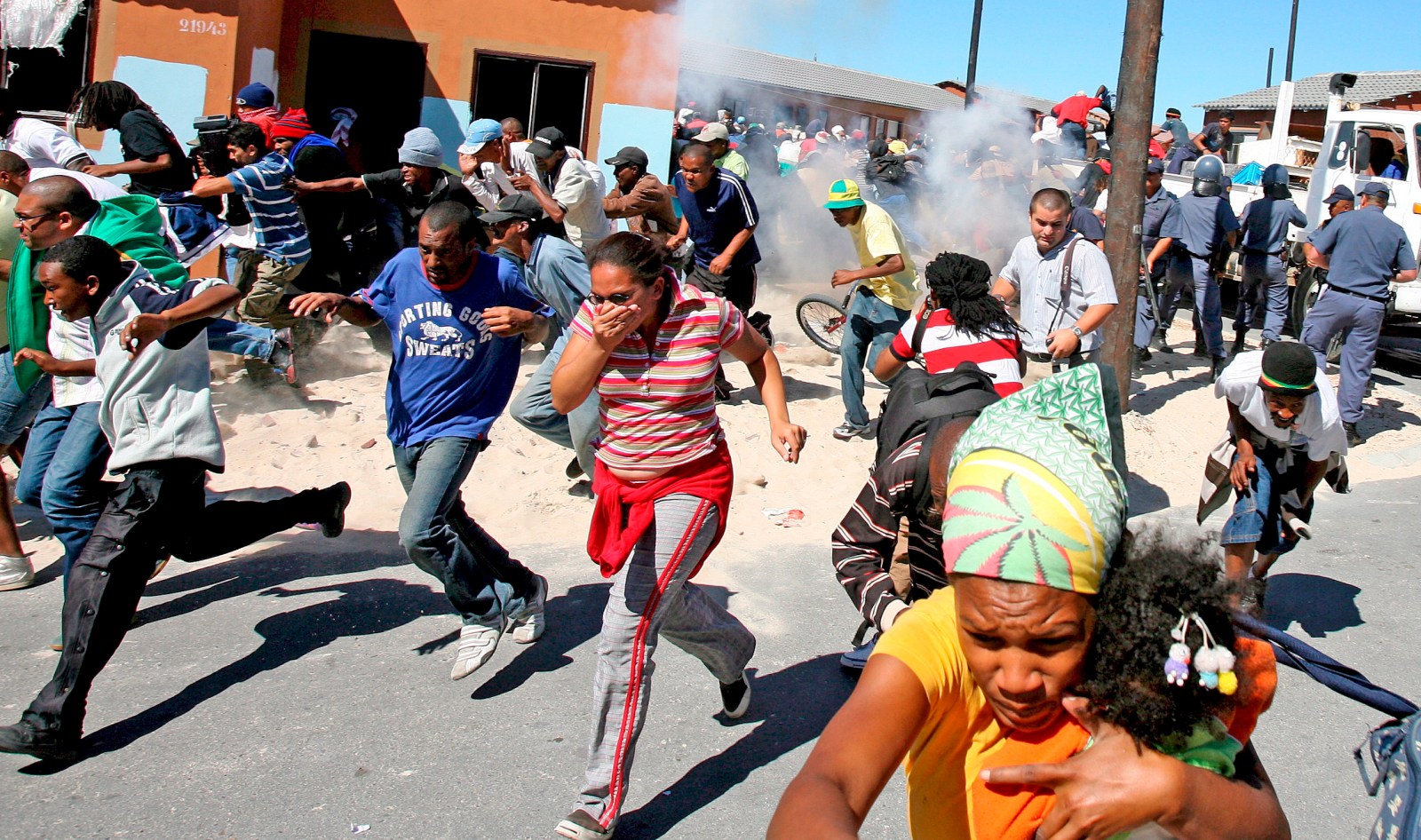 A South African woman and baby run with others away from South African police as they fire stun grenades and rubber bullets to disperse a crowd opposing evictions of their illegally occupied houses in Delft, Cape Town, South Africa 19 February 2008. EPA/NIC BOTHMA

Respecting people’s rights requires higher standards regarding use of rubber bullets and other less-lethal weapons.

Rubber bullets are less likely to result in death than live ammunition. But they can kill. And the risk of serious injury or death increases dramatically when they are used at close range. Apart from rubber bullets, weapons that are widely used in public order policing in South Africa also include tear gas, stun grenades and water cannons. The SAPS has also purchased 40 Long Range Acoustic Devices (LRAD).

All of these weapons can cause serious harm. Two babies, two-week-old Jayden Khoza and four-month old Alunamda Mncedane, have died over the past two and a half years apparently due to exposure to tear gas fired by public order police.

In the past the custom was to refer to the weapons used by public order police as ‘non-lethal’. But as illustrated, these weapons are sometimes lethal. The preference now is to refer to them as ‘less-lethal weapons’. Infants and young children, and the elderly, are particularly susceptible to their potentially lethal consequences.

A new Institute for Security Studies and Omega Research Foundation report highlights the risks associated with the less-lethal weapons used by police and prison officials. It calls for better regulation of the use of rubber bullets and other types of less-lethal weapons.

Independent Police Investigative Directorate (IPID) statistics show that 44 people have been killed with “service firearms” in “crowd management related” incidents over the past five years. IPID information doesn’t distinguish the type of ammunition used. Though some people have died after being shot with rubber bullets, it is unclear how many. Some of them have also died after being shot with live ammunition.

Others have sustained serious injury. During a protest in Dobsonville, Soweto, earlier this month, well-known local actor Patrick Shai tried to discourage protesters from burning tyres on the road. The police shot him 11 times with rubber bullets while dispersing the protest. Reports indicate that Shai’s injuries include an open leg wound. This, and pictures of his injuries, suggest that he was shot at close range.

During the #FeesMustFall protests at Wits University in October 2016, student leader Shaeera Kalla was shot in the back at close range with 13 rubber bullets while fleeing from the police. A Catholic priest, Father Graham Pugin, was also shot in the face at close range. A Braamfontein office cleaner was permanently blinded in one eye after being hit by a rubber bullet during police action against students.

And in Hout Bay in 2017, public order police shot a 14-year-old boy in the mouth with a rubber bullet at close range. Television footage shows that the boy was hiding under a wooden table, directly in front of the police officer who shot him.

Though police frequently use rubber bullets, regulations regarding their use are vague. They state that rubber rounds may be used only ‘to disperse a crowd in extreme circumstances, if less forceful methods have proven ineffective.’ There are no provisions stating that they may not be fired at close range or that prohibit aiming at the face.

In a 2012 judgment the Constitutional Court stated that peaceful protesters do not forfeit their right to protest because of the conduct of violent individuals. This implies that the indiscriminate shooting of rubber bullets at protesters is illegal. The same applies to other members of the public such as Shai who may be trying to intervene to discourage violence.

But police often appear to target rubber bullets at members of a crowd, and others in the vicinity, irrespective of their individual conduct. The SAPS currently uses “double ball” rubber rounds designed for shooting crowd members indiscriminately.

Though in the Tatane incident seven SAPS members were put on trial for the killing, all of them were acquitted. No SAPS officer has been held accountable for misuse of force in any of the incidents highlighted here.

Less-lethal weapons are also used in South African prisons. A particular concern is the electric shock “stun shields” used mostly by the Correctional Services reaction unit, now called the Emergency Support Team. These have been used as instruments of torture on various occasions.

Due to the risk that they will be used as instruments of torture, the ISS-Omega Research Foundation report recommends that direct-contact electric shock weapons, and restraints such as electric stun belts, that are used in prisons, be prohibited.

The risk that less-lethal weapons will cause death or serious injury is enhanced not only by the absence of clear standards regarding their use, but also the absence of consequences for violating the standards that do exist.

Strengthening accountability for the use of less-lethal weapons, both in public order policing and in prisons, is therefore also necessary. This will depend on a commitment to accountability of political leaders, and SAPS and Department of Correctional Services leaders and managers. DM

David Bruce is an ISS Consultant and independent researcher on policing, crime and criminal justice