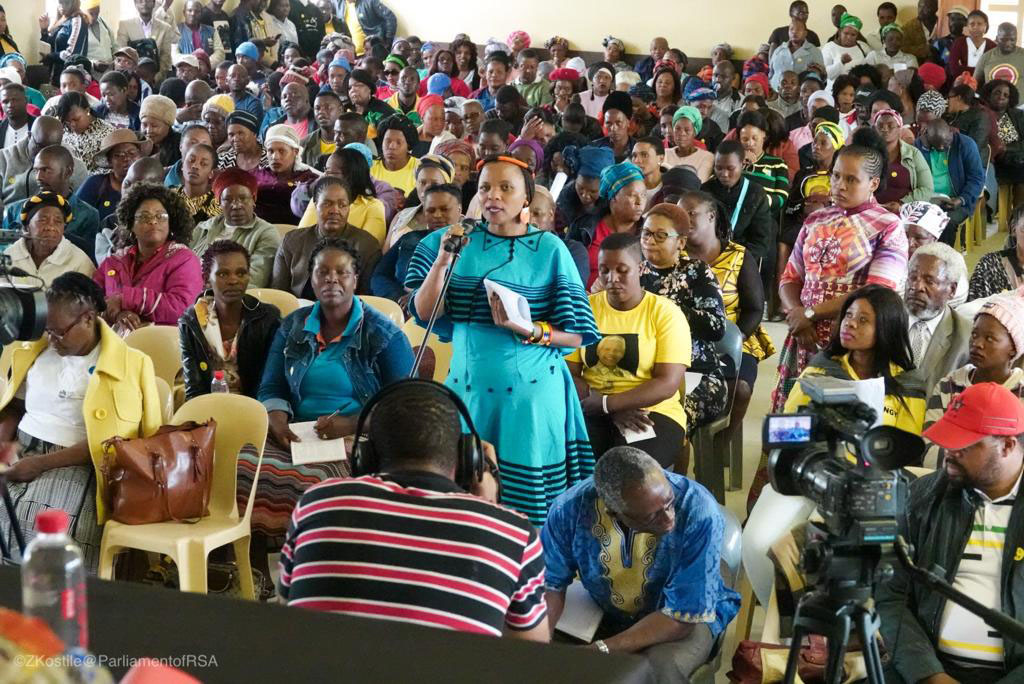 The Health Committee listens to comments from the public during the KwaZulu-Natal leg of its public hearings on the National Health Insurance Bill (Photo: Zwelethemba Kostile/ParliamentRSA)

Parliament’s health committee has wrapped up the KwaZulu-Natal leg of its public hearings on the NHI Bill in Durban, Mzimkhulu and Endumeni. While there was broad support for the bill, a few people did express reservations.

The hearing was supposed to start at 10:00, but at the appointed time sound technicians and camera personnel were still setting up and people were queuing outside the venue. The hearing started an hour late.

Despite eThekwini comprising a large urban population, those who attended the Durban leg of the hearings could barely fill the Olive Convention Centre conference hall.

She stressed the importance of the hearings on the NHI Bill.

“Spearheaded by Parliament’s Portfolio Committee on Health, these hearings mark an important milestone in our journey to achieve universal access to healthcare,” said Ndlovu.

“More South Africans are living longer, with average life expectancy increasing to 64 years in 2018 from a low of 53 years in 2005. This progress in life expectancy reflects improvements in the quality and availability of healthcare. However, a great, great deal still needs to be done to attain the universal goal of a better life for all,” she said.

Ndlovu said the eThekwini Municipality saw the NHI as the only vehicle that would enable the people of South Africa to have access to affordable, quality healthcare services regardless of their socio-economic status, adding that the system would also address the issue of fragmentation in terms of funding in the health system.

“Ladies and gentlemen, we need this bill to be finalised for ourselves, our children and the future generations in order to live a better life,” she said.

Even though everyone in attendance was given a pamphlet in English and isiZulu detailing the bill, chair of the Portfolio Committee on Health Dr Sibongiseni Dhlomo took some time to paraphrase the bill.

Dr Mags Moodley, who made a presentation on behalf of a group of general practitioners, said they were in favour of the bill, but cautioned that it should be run in an orderly manner.

“The majority of people support the implementation of NHI as they feel that we cannot run two types of health systems, one for the privileged and the other one for the underprivileged,” said Moodley.

“Globally, the UN and other agencies have adopted universal health coverage as a means to meeting the world’s health needs, In SA this takes the form of NHI,” said the ACM.

“The government needs to amend this part in the bill before it is passed into law to avoid legal challenges that will ensue,” said the ACM.

Peter Dhlomo from Hammarsdale said he supported the bill and called on the government to expeditiously start the programme.

“NHI is a good programme which is going to close the gap between the poor and rich, as we are going to access universal health services,” he said.

“Let me give you the reasons why I support NHI — the Constitution which is the supreme law of our country, compels the state to respect, promote and fulfil the rights in the Bill of Rights. Some of these rights are protected under Section 27, stating that everyone has a right to have access to healthcare services. This section ties in with universal healthcare coverage which is a political choice and aims to make healthcare accessible to everyone,” said Mthimkhulu.

Chris Thompson from Pinetown said although he supported the bill, he also wanted to suggest that some parts be removed.

“I suggest that we remove part of clause 8(2) referring to a voluntary medical insurance scheme. This part of the clause contradicts clause 33 of the bill that says the future role of medical schemes would be complementary as medical schemes cannot cover the same services as those covered by NHI,” said Thompson.

Zethu Khanyile from KwaMashu said she did not support the bill.

“The government is failing to provide good health services in public clinics and hospitals at the moment. How is it going to be able to do better with the proposed system?” asked Khanyile. She also wanted to know where the money to fund the NHI would come from.

There were also claims by some at the meeting that an ANC councillor from Hammarsdale had provided residents from that area with food parcels. This could not be confirmed, but a group of people clad in ANC T-shirts were seen with food parcels while the hearing was in progress. When the Spotlight reporter tried to photograph them, he was threatened with violence and told to back off.

In another hearing at Clydesdale Community Hall in Mzimkhulu in the Harry Gwala District on 24 November, most attendees said they supported the bill, but also raised some concerns.

The hall was packed and some had to stand for most of the hearing.

Children as young as 12 were seen in a queue outside the hall. When asked why they were there and what they knew about NHI, one, Xolelwa Nkala, 12, said: “Asizi ukuthi sizokwenzani lapha sitshelwe ukuthi asize lapha ukuze sizogcwalisa ihholo (we do not know what we are doing here — we were told to come and fill up the hall.”

Sizakele Feni from Clydesdale said she supported the bill because it would improve the lives of the poor.

Another resident, Msizi Lugaju from ward 3 in Ubuhlebezwe Municipality in Harry Gwala, said he also supported the bill:

“NHI is going to help us all especially the poor and close the gap between the poor and the rich,’ said Lugaju.

Others were less hopeful.

Hlanganani Lukhozi said he did not see NHI succeeding because of the high level of corruption in the country.

“Every year the department’s budget is increased, but services are dwindling instead of increasing. If you talk to the chair of the committee it sounds nice, but practically it is not the case. The government is going to even be in control of people with medical aids.

“Chair, we are told that in order to have a good life we need to eat healthy, but if I come to you and said please give me a portion of your salary, you will refuse. It’s the same thing that you want to do now (with NHI). You are now saying people who pay for medical aids must fund NHI, which is not fair,” said Lukhozi.

Lukhozi called on the government to improve the current health system.

“The problem that we have is corruption — the same problem that is going to cripple NHI because you are saying there will be a board that is going to administer the fund. Currently SAA has a board but the entity is failing to pay its staff, which is also going to happen with NHI. We will be told that doctors and nurses were not paid and they are on strike because of corruption in the government system,” said Lukhozi.

Others pleaded for inclusion in provisions of the bill.

Traditional healer Zamani Phoswa said he supported the bill but warned that the programme would not succeed if it excluded traditional leaders.

On 25 November 2019, the committee concluded its public hearings in the province at the Endumeni Local Municipality at the Glencoe Town Hall. This hall was also packed.

Residents from Dundee highlighted the healthcare problems they faced on a daily basis in their communities. These included the lack of ambulances and shortage of medicine and staff at health facilities.

Dr Dhlomo reminded the public that they could still make written submissions on the bill until Friday, 29 November 2019. MC

This article first appeared in Spotlight