ANC must wield an iron fist against corruption 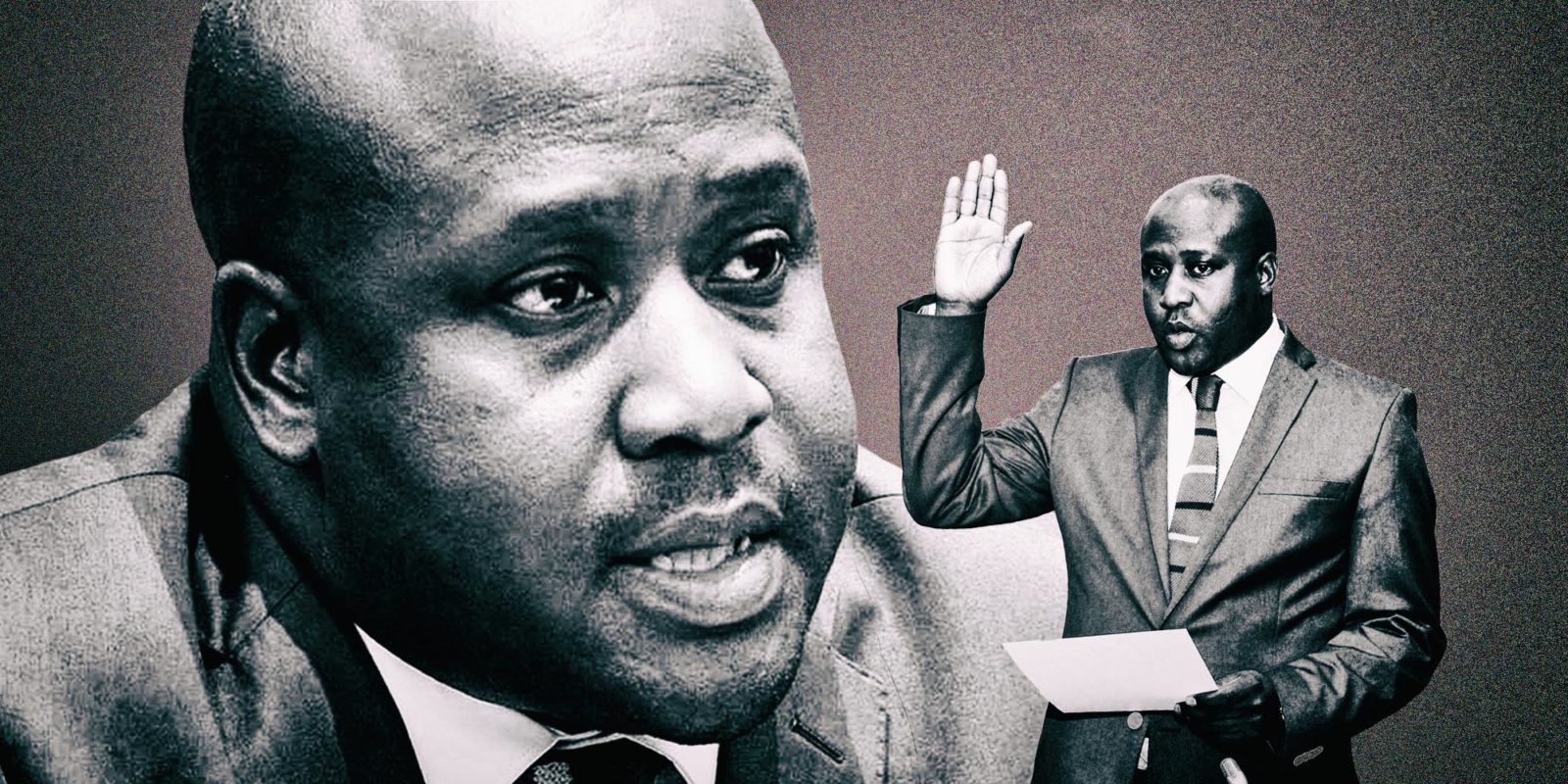 Urgent action is needed to put an end to the ANC’s frightfully laissez-faire attitude to corruption. It constitutes the biggest threat to the organisation’s continued governance of South Africa. The cacophonous use of revolutionary language is nothing but obfuscation, a looters’ smokescreen.

When on 21 November 2019, the Directorate for Priority Crime Investigation, the Hawks, arrested Bongani Bongo on bribery charges, collective, if abated, joy and relief ensued from a despairing nation.

Bongo, who was arraigned and immediately released on R5,000 bail in the Cape Town Magistrate’s Court, is a member of the African National Congress National Executive Committee, a member of Parliament and chairman of Parliament’s Home Affairs Portfolio Committee. He was at one time minister of state security in the Cabinet of former president Jacob Zuma.

ANC spokesperson Pule Mabe welcomed Bongo’s arrest for his alleged attempt to bribe, some two years ago, advocate Ntuthuzelo Vanara, a parliamentary employee. Typifying the governing party’s disdain and misreading of public sentiment, Mabe intimated that Bongo would retain his official positions and titles, pending the outcome of the investigation, which will only start in January next year. For its part, the ANC in Parliament said it would “not comment on the allegations labelled (sic) against Comrade Bongo as we want the law to take its course”.

A subsequent media report suggested that Bongo’s short-term political future might have been left in the hands of ANC Secretary-General Ace Magashule. That may be so, but that would be dereliction of its responsibilities by the NEC as no such authority vests in the person or office of the secretary-general. In cases such as Bongo’s, action to be taken must be informed by a set of explicit resolutions passed at the organisation’s 54th conference held in Nasrec in December 2017.

Under the heading, Strengthening the Integrity of the ANC and its Role in Society, the pertinent set of resolutions call upon the NEC or Provincial Executive Committee, as the case may be, to urgently do the following:

“Demand that every cadre accused of, or reported to be involved in, corrupt practices, accounts to the Integrity Commission immediately or face Disciplinary Committee procedures.” Another resolution: “Summarily suspend people who fail to give an acceptable explanation or to voluntarily step down, while they face disciplinary, investigative or prosecutorial procedures.” (My emphasis.) An additional resolution states: “We publicly disassociate ourselves from anyone, whether business donor, supporter or member, accused of corruption or reported to be involved in corruption.”

The line of action is as clear as crystal. Inexplicably though, the ANC leadership has of late repeatedly failed to follow set procedures in dealing with its errant members. It has simply overlooked a core mandate and elected, instead, to adopt the escapist position that requires that a person implicated in corruption must be “presumed innocent until proven otherwise by a court of law”. This is a cynical cop-out. No organisation, whether social, business, government or labour, defers disciplinary action against its members to a court of law on the false premise that it is the court’s responsibility to pronounce on infractions of a disciplinary nature. The duty of a court of law is to adjudicate criminal and civil cases. Period.

Enforcement of the conference resolutions cited above is fundamental if the ANC hopes to re-establish the values of the party that are currently being observed in the breach.

It is clear that conference resolutions are being selectively applied. How else does one reconcile the fact that when calls are made for the “expropriation of land without compensation” and for the nationalisation of the Reserve Bank, they are correctly said to be based on conference resolutions? However, those resolutions that seek to secure the very survival of the organisation are replaced with hypocritical gibberish about the need to presume the innocence of the implicated member until he or she is proven guilty in a court of law.

Large-scale corruption, the insane appetite for conspicuous consumption and the display of flashy lifestyles that flow from it have already cost the ANC deeply in voter confidence. Our constituency essentially consists of poor people whom centuries of colonial and apartheid rule relegated to second, third and fourth-class citizenship. It denied them the exercise of their social and political rights, and it excluded them from the mainstream economy. We are supported by people who 25 years after the attainment of political freedom face worsening levels of poverty and endure ever-increasing levels of joblessness.

As a consequence of our failure to act on conference resolutions “Honourable Bongo” will continue to strut the scene in Parliament and chair a portfolio committee created to hold Home Affairs and other executives to account. It matters little to the ANC that Bongo has been charged with trying to bribe an upstanding official in order to sabotage a parliamentary process!

It also does not concern the powers-that-be that when Bongo was made minister of state security, he was already facing fraud and bribery allegations and that these were under investigation by the Hawks. Also, that he is alleged to have received R30,000 in kickbacks. Surely, respect for the public dictates that he be removed from Parliament as soon as possible pending clearance of the charges.

Is it because closing ranks matters more than public feelings that we are so soft on corruption? The people will remember, as they surely do, that in 2017 our leaders instructed ANC MPs to dispense with their consciences and vote to retain Jacob Zuma as president of the country. This, despite the fact that our Constitutional Court judges had unanimously found him to have breached his oath of office.

Our leaders find absolutely nothing wrong, it would seem, with deploying an as-yet uncleared Bongo to be part of a team assigned to investigate ways of saving the VBS Mutual Bank, an institution that was comprehensively looted by its executives; and, yes, also by other politically connected individuals, including certain leaders of the Economic Freedom Fighters.

It is perhaps proper that one pauses to commend the courageous investigative journalists who have done so much to lift the veil on the mega-corruption, not least that which is perpetrated by venal politicians operating behind the mask of fiery economic transformation rhetoric. Pity the myriad voiceless, poor and the unemployed, in whose name, but certainly not for whose benefit, the massive thieving is carried out. The endeavours of the journalists helped unveil the GuptaLeaks, the huge VBS Bank fraud and the Bosasa gravy train, to mention but some of the prominent ones.

Bongo is, unfortunately, not alone but part of a coterie of similar notables whose alleged malfeasance, it is said, has not been established by a court of law. That encourages the ANC leadership to let them continue representing the electorate, so long, which may be very long.

Mosebenzi Zwane chairs Parliament’s Transport Portfolio Committee. When he was a Free State Member of the Executive Committee for Agriculture, the Gupta brothers executed their hideous raid on funds that were meant to help poor Vrede farmers get into commercial dairying. As is known, the money was squirrelled out to Gupta accounts, thence to financing the Gupta wedding at Sun City. I often wonder how the Guptas came to be dairying experts in South Africa, given that in India people mainly use buffalo milk? Holy cow!

The Zondo Commission into State Capture was told that Zwane summonsed Standard Bank directors to attend an inter-ministerial committee in 2016 where two Cabinet ministers tried to persuade the bank to retract its decision to close Gupta family accounts. We also learn that he falsely claimed that he had Cabinet support for a judicial inquiry into South African banks.

The exuberant Supra Mahumapelo, he of “the absence of presence”, chairs the Tourism Portfolio Committee. As anti-corruption riots broke out in the streets of Mahikeng, the ANC stripped him of the North West premiership and his province was placed under administration by the national government. A R1.8-million statue dedicated to his friend Jacob Zuma went up in a Groot Marico desperately in need of water and sanitation.

The beneficence of Mahumapelo also landed Zuma a R1.5-million herd of Bonsmara cattle. Or, was it his own money now? Reports suggest he used public funds. More than two years on, the embattled Hawks are still probing. He continues to serve so long. Denel, the nation’s arms manufacturer once hijacked by the Guptas, granted Mahumapelo’s son a pilot bursary, but with the changing times, it clawed back the money.

These and other unnamed worthies owe their deployment to Parliament to Secretary-General Magashule. This luckless but “disciplined cadre of the Movement” is implicated in a phalanx of corruption allegations. Magashule did contemplate taking legal action against Pieter-Louis Myburgh, who wrote a damning book on Magashule titled Gangster State. But that has since been muted. That makes it fine for him to continue in office because no court of law has ever found anything untoward against him. Yes, the Hawks did raid his Bloemfontein office in January 2018 in connection with the Vrede Dairy Project.

Then there is this thing being said about his daughter Thoko Malembe acquiring a Shell fuel station previously owned by the Free State Development Corporation in Phuthaditjhaba.

That the SG’s son, Tshepiso Magashule, was at one time employed by the loathsome Guptas as a consultant is neither here nor there. It’s nobody’s business also that in 2011 Tshepiso joined the Guptas on a three-week holiday to New York and Venice; and that he and his brother Thato were in 2015 treated to an eight-day stay in the Oberoi hotel in Dubai. Poor Tshepo, a few weeks ago he was forcefully removed by business rescue practitioners from one of the houses belonging to the Guptas.

President Cyril Ramaphosa has taken commendable steps by setting up commissions to investigate the extent of corruption in various state institutions. The nation waits with bated breath to see corrupt individuals being brought to trial. That, it must be stressed, is in the domain of prosecutorial institutions, not the president.

What is in the domain of the ANC president and his fellow leaders in the NEC and elsewhere, is the need for urgent action to put an end to the ANC’s frightfully laissez-faire attitude to corruption. It constitutes the biggest threat to the organisation’s continued governance of the country.

The plain truth is that the factions that exist within the organisation are not based on ideological differences that require concerted efforts to reconcile in order to bring about unity.

The cacophonous use of revolutionary language is nothing but obfuscation, a looters’ smokescreen.

The action that must be taken and supported by the broad membership is firm and ruthless action against the corrupt. DM

Mavuso Msimang is a former member of the High Command of Umkhonto we Sizwe, former CEO of SANParks, former chief executive of KZN Tourism, and a former non-executive director of Robben Island. He is also a former director-general of the Department of Home Affairs.